The FIFA corruption sideshow: Takedown of 1 percent crooks or strategic move against Putin? 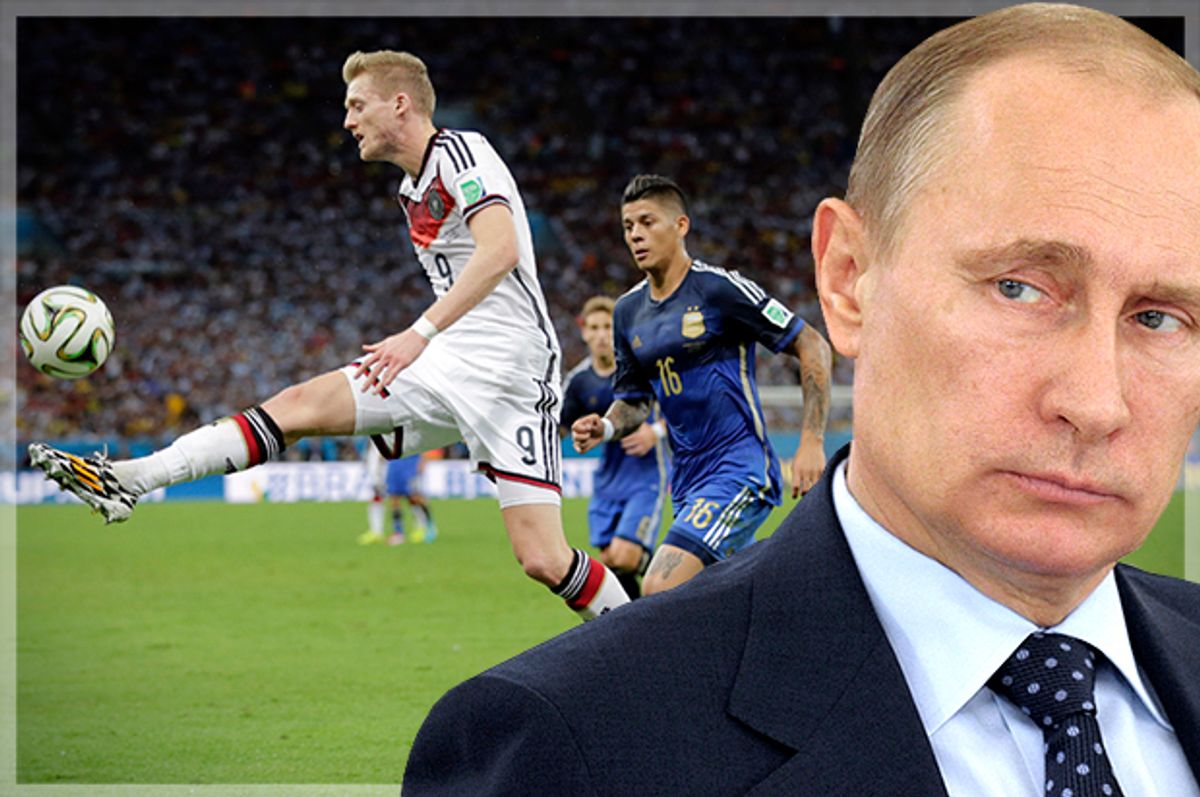 It was going to take a powerful nation where soccer was not a dominant cultural force to attack the alleged large-scale institutional corruption of FIFA, the governing body of the world’s most popular sport. There’s only one country on the planet that matches that description, a country that also perceives its laws as extending to all corners of the globe. Considered in that light, this week’s federal indictments against 14 major figures in world soccer — many of whom were arrested in a late-night raid at a Zurich luxury hotel, a scene worthy of a “Mission: Impossible” movie — should not come as a complete surprise.

Still, this was a huge and dramatic gesture from the Obama administration, which has been inordinately cautious in going after many other varieties of international crime and corruption. That’s an important point, if we’re trying to unpack what just happened and how to understand it. We need to ask the crucial legal question of cui bono, “Who benefits from this?” and maybe the more important question of who gets hurt by it. But let’s bracket that for the moment and move on. Brand new Attorney General Loretta Lynch, who has apparently been cooking the FIFA case for several years in her previous gig as the lead federal prosecutor in New York, has evidently decided to use her brief tenure at the tail end of a lame-duck presidency to write her name in the history books.

Should Americans feel proud about our nation’s startling intervention in the global sports landscape? Well, hell, why not? Based on what we know so far, these FIFA officials and their partners in crime were grotesque examples of the global 1 percent in action. In the most notorious single example, former American soccer official Chuck Blazer, who allegedly misappropriated at least $15 million from the North American and Central American soccer federation, supposedly kept a $6,000-a-month apartment in New York’s Trump Tower for his cats. (His own apartment was $18,000 a month.)

But maybe we ought to attach an asterisk to that “why not,” and be cautious about proclaiming our superior virtue. Maybe we ought to wonder why the denizens of the executive suites at Citibank and Chase and Barclays are not facing federal indictment and languishing in the joint, alongside soccer officials from second- or third-tier countries accused of taking piss-ant bribes. The rental price of Chuck Blazer’s two apartments sounds extreme to you and me, but I doubt that buys you a week in Jamie Dimon’s Park Avenue condo — or pays the servants for a week at his sprawling suburban mansion in Westchester.

Maybe we ought to take a look at the dysfunctional recent history of the National Football League, as it stumbles from one mishandled scandal to the next. A star linebacker beats his fiancée unconscious and the video evidence disappears; the league’s most charismatic and all-American star stands accused of cheating, in especially idiotic fashion. Behind all that, as I’ve suggested before, lies the looming existential threat: Competitive American football leaves many and perhaps most of the men who play it with permanent brain damage, at enormous risk of depression, dementia and suicide. We could also consider the hypocritical plantation system of NCAA football and basketball, with their own litany of corruption scandals and abuse cover-ups. It would take another column, or an entire book, or perhaps a Philip Glass requiem in a minor key, to reflect upon the strange degeneration of Major League Baseball, with its lily-white fan base and its antitrust exemption that no living person can explain.

Was it worthwhile to use the broad reach of American federal law to attack the miasma of corruption that has poisoned international soccer? Considered in the abstract, of course it was, and sports fans all over the world have a thoroughly unexpected reason this week to feel grateful to our oft-blundering empire. Prosecuting FIFA’s leadership could go down as one of the Obama administration’s oddest and most striking accomplishments. But there is no such thing as “the abstract.” Within the American legal and political context, the FIFA scandal is something of a sideshow, and maybe even a distraction. The question now is how we frame and understand the FIFA story: Is it an incomprehensible saga about a bunch of El Corrupto foreigners and a sport many Americans still view with suspicion? Or is it a parable about the pervasive rot of global capitalism and the decay of long-revered institutions? Once you lift the rocks of the global economy and start digging up the nests of power and money, the ant trails lead everywhere.

I have little doubt, personally speaking, that most of the charges leveled against FIFA officials and various sports marketing executives are true. Anyone who follows international soccer has heard these stories about bribes and payoffs and complicated back-room quid pro quo maneuvers for decades. Indeed, the rumored level of corruption goes well beyond anything we’ve seen documented so far. At this point there are no indications that FIFA officials ever fixed matches or tournaments on the field. But who the hell knows? The “beautiful game” is now cloaked in a dark cloud that will take years to dispel, and it’s entirely reasonable to suspect that worse allegations are coming.

Under the 17-year reign of current FIFA president Sepp Blatter, and the 24-year reign of his mentor João Havelange before that, soccer’s governing body has become a massive international business grossing more than $1.3 billion a year. (Those are the reported, above-board numbers, which quite likely do not tell the whole story.) It has been compared to a feudal kingdom, with power concentrated at the top and ample rewards doled out to loyal fiefdoms around the world, and also to an organized crime syndicate. Based on this week’s news, those analogies both seem pretty accurate. Just to cover my butt a little: Blatter has denied any wrongdoing and promised, apparently without snickering, to root out evildoers and cooperate with prosecutors. He was easily re-elected to another term as president on Friday, at age 79. That might seem bizarre on various levels, but is entirely believable once you understand the byzantine internal politics of FIFA.

As for Havelange, the legendary Franco-Brazilian aristocrat who made this all possible, he is now 99 years old and living in palatial retirement digs in Rio. It’s tempting to get sidetracked into outrageous anecdotes about that guy, who seems more like a character in a Mario Vargas Llosa novel, or a villain in a Puccini opera, than a sports executive of the modern age. Among the reams of allegations made against Havelange over the years, we have heard that he accepted gifts of Delft china and Old Master paintings from Dutch sports officials – much less vulgar than the bourgeois suitcases full of cash, I think you’ll agree. In 2012, a Swiss prosecutor finally revealed documents suggesting that Havelange had taken millions of dollars in payments from a scandal-ridden sports marketing firm called ISL — but under the relevant Swiss laws of the 1990s, such “commercial bribery,” as described by the marvelous German word Schmiergeld, was not illegal.

I think the simplest explanation of why Obama and Lynch chose this particular high-value target is because they could. Sepp Blatter is a powerful dude, all right, but he has little or no constituency among the American corporate or political elite. (Chuck Blazer, who barely registered on the scale of American super-affluence, struck a plea deal and turned federal informant some time ago.) To this point, the indictments seem constructed to strip away much of Blatter's inner circle without touching him directly. Most of the people who have been charged in the FIFA case, or who might still be, are the bush-league rich: millionaires from less powerful countries in Latin America and the Caribbean, not billionaires with Wall Street connections.

I’m not going to leap clear across the Bering Strait to the Russian position that the FIFA indictments and the Zurich sweep were a violation of international law. For one thing, Vladimir Putin’s government has overly obvious reasons for taking that view. Russia is supposed to host FIFA’s 2018 World Cup, a decision that has been controversial since it was made and has come under sustained international attack since Putin’s invasion of Ukraine. Whether that tournament and the even more dubious and/or hilarious 2022 World Cup in Qatar, where summertime high temperatures routinely exceed 110 degrees, will actually happen is now very much in doubt. (Yes, FIFA leaders awarded the world’s biggest sporting event to a tiny desert monarchy dominated by Sharia law, which has no fresh water and fewer than 280,000 citizens. Seriously.)

But if we decode the Russian position as an argument that the United States is using the FIFA indictments as a covert instrument of international politics, it assumes a new and striking coherence. Buried in the initial New York Times report on the case, in fact, we find the intriguing suggestion that the FBI’s four-year FIFA investigation “grew out of an unrelated inquiry into aspects of Russian organized crime.” I would be very curious to learn how “unrelated” it really was, and what aspects of the Russian mob led the Feds into the murky waters of international soccer.

It’s difficult to discern any political pattern, at least in the normal sense of that term, within the FIFA indictments so far. Brazilian soccer honcho José Maria Marin is a notorious right-winger, for example, who supported that nation’s longtime military dictatorship. Rafael Esquivel, the head of Venezuela’s soccer federation, seems to have been cozy with late socialist president Hugo Chávez. But it all depends what we mean by “politics,” am I right? As with most things governments do, many factors are no doubt involved in the American prosecution of FIFA. But it’s not unreasonable to view this episode as a new front in the new Russian-American Cold War.

One obvious question is what role prominent FIFA indictees like Marin and Esquivel, along with Trinidad’s Jack Warner, Uruguay’s Eugenio Figueredo and the Cayman Islands’ Jeffrey Webb, may have played in the Russian and Qatari World Cup deals. Is the American strategic goal to take the 2018 Cup away from Putin and deliver that lucrative prize to a Western ally? (British soccer authorities have repeatedly expressed their interest and readiness.) If so, you have to tip your hat: That would be an ingenious, Machiavelli-scale form of payback for the Ukrainian invasion, which has made the Western powers look foolish and impotent for the last two years.

It serves the interest of the world’s most beloved sport and its millions or billions of fans if the game’s corrupt bureaucracy can be purged and dismantled, without question. That whole Qatar thing — and I say this without a shred of hard evidence or inside knowledge — stinks to high heaven. But the challenge for those of us who have no personal stake in where future World Cups are played, or in who got paid off to make that happen, is to view the FIFA story as something more than an exotic perp walk or a trove of cat-apartment anecdotes. It is also the inadvertent expression of an age when powerful institutions are in permanent crisis and dark secrets tend to come out. It’s an age of great danger and great possibility. When its threads are revealed, as one has been here, they must be grasped — and pulled hard.