The 10 most memorable celebrity commencement speeches of 2015

The speakers had plenty of inspiration to impart, from "be the Left Shark" to "Bill Nye believes in you" 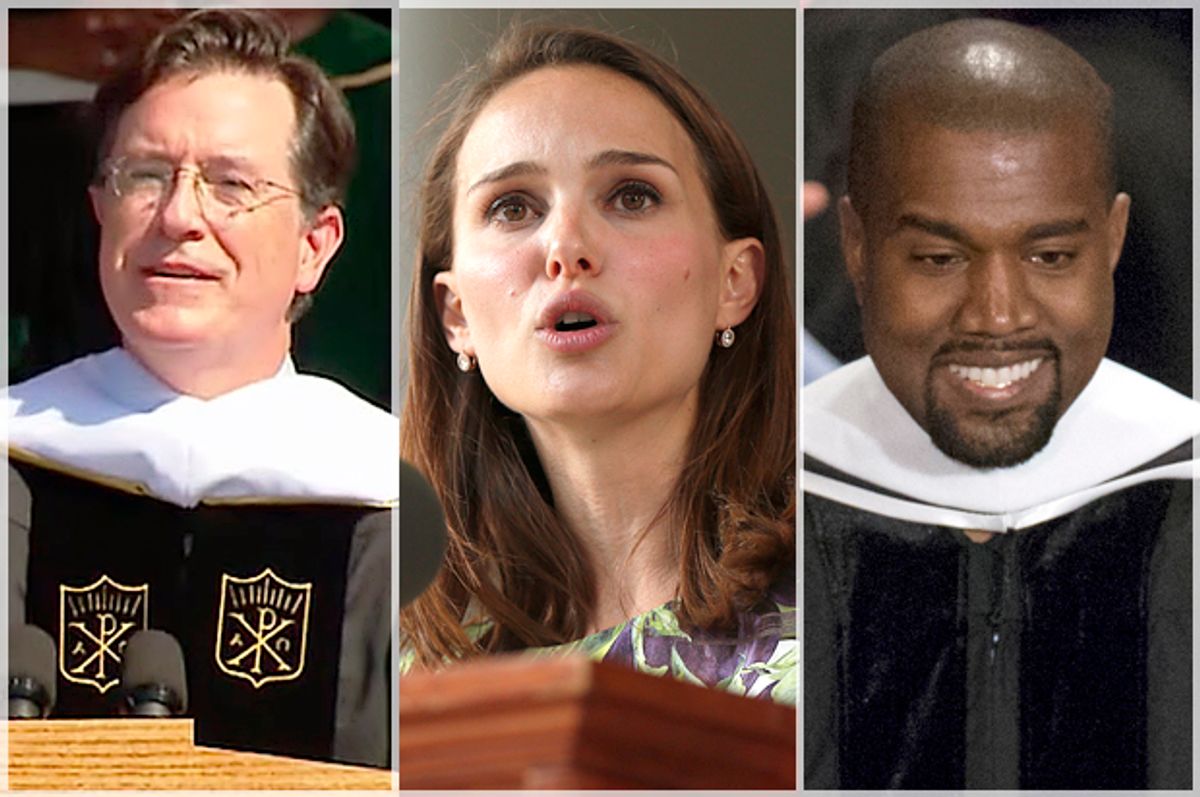 It’s graduation season, which means it’s time for celebrities to get paid a bunch of money to don academic regalia that they may or may not have earned and to dole out words of inspiration to our future leaders, words that will be immortalized in viral YouTube videos for generations to come. Here are some of the most memorable speeches this year:

Kanye West at the School of the Art Institute of Chicago
Upon receiving his honorary doctorate from the Art Institute of Chicago, Kanye delivered both a graduation speech and a lengthy Q&A the following day. As always, it was full of quotable nuggets, both light ("George Bush has some very cool self-portraits") and earnest ("I am a pop artist. So my medium is public opinion. And the world is my canvas.") Of course, there was plenty of ego thrown in there to. To wit: "It’s these Floyd Mayweather belts that are needed, to prove what I’ve been saying my entire life. Whether it’s the co-sign of Paul McCartney grabbing me and saying, it’s okay, he doesn’t bite white people, or the New York Times [magazine] cover, or the Time ‘Most Influential’ cover. And now, a doctorate, at the Art Institute of Chicago." Good job, Yeezy.

Stephen Colbert at Wake Forest University
Colbert gave a surprisingly sincere and earnest speech at the Wake Forest graduation, pointing out the similarities between graduating from college and his own career trajectory. As he put it, "It’s time to say goodbye to the person we’ve become, who we’ve worked so hard to perfect, and to make some crucial decisions in becoming who we’re going to be. For me, I’ll have to figure out how to do an hour-long show every night. And you at some point will have to sleep. I am told the Adderall wears off eventually.” Like a boss, he ended the speech with a nod to "Mad Max": “May you ride eternal, shiny, and chrome.”

Robert De Niro at NYU Tisch School of the Arts
De Niro channeled his brash, straight-talking film characters in his NYU commencement speech, telling arts students that they are, well, “fucked." As he put it, "a new door is opening for you — a door to a lifetime of rejection. It's inevitable.” Still, there was a silver lining to De Niro's real talk. "When it comes to the arts, passion should always trump common sense," he added. "You weren't just following dreams; you were reaching for your destiny."

Maya Rudolph at Tulane
We're hard-pressed to imagine a more jubilant sendoff into the adult world than Maya Rudolph doing her Beyoncé impression while singing the National Anthem. Tulane grads, we are jealous.

Natalie Portman at Harvard
Portman was raw and revealing in her speech at her alma mater, Harvard, talking about the dark times she faced at college, coping with depression and feeling like she didn't fit in. As she put it, "Today I feel much like I did when I came to Harvard yard as a freshman in 1999... I felt like there had been some mistake, that I wasn't smart enough to be in this company, and that every time I opened my mouth, I would have to prove that I wasn't just a dumb actress." Still, it was her time at Harvard that finally made her realize that acting was the path for her. "After fours years of trying to get excited about something else, I admitted to myself that I couldn't wait to go back and make more films," says Portman. "I wanted to tell stories, to imagine the lives of others and help others do the same."

Bill Nye at Rutgers University
There are few more inspiring gents out there than Bill Nye, and his commencement speech had a strong and focused message, empowering graduates to join the fight to stop climate change. As he put it: "We are now deep in the most serious environmental crisis in human history. I believe you all can avoid this looming disaster. And, much as I love my 'Uptown Funk,' I nevertheless hope you all can also avoid another Disco Era, and especially those polyester leisure suits.” But don't worry, grads: Bill Nye believes in you. "Just think what else is out there, what other physical or biological phenomenon is just waiting to be discovered, or invented, or thought of," he said. "You all can do this. You all can be the Next Great Generation. You can, dare I say it, Change the World."

Matthew McConaughey at the University of Houston
Much like McConaughey’s 2014 Oscar acceptance speech, his address to University of Houston grads didn’t always make a ton of sense, but hey, that’s why we love the guy. The rambling oration was full of vague, Rust Cohle-esque aphorisms and metaphors -- delivered with all-caps emphasis -- such as: "DON’T LEAVE CRUMBS" and "TAKE THE LID OFF THE MAN-MADE ROOFS WE PUT ABOVE OURSELVES AND ALWAYS PLAY LIKE AN UNDERDOG." Amen!

Jon Bon Jovi at Rutgers University, Camden
Bon Jovi went all out for his Rutgers commencement address, whipping out a guitar and performing a song he wrote called "Reunion": “As the night ignites the day, go make some memories along the way,” Bon Jovi sang. “Or write your song, sing along, love your life. Learn to laugh, dare to dance, touch the sky. Take pictures each step of the way. Make this the best of the rest of your days. Start your revolution. And I’ll see you at the reunion.” It's no "Livin' on a Prayer," but it's still pretty sweet.

Meredith Vieira at Boston University
The journalist and talk show host gave a speech that was alternately funny and moving, referencing Katy Perry’s iconic Super Bowl performance as she told students to "be the Left Shark.” As she put it: "Remember last super bowl, when the Patriots won? You may be thinking of Tom Brady’s deflated balls right now, but I’m thinking of Katy Perry’s halftime performance. She was on stage dancing with two sharks. The shark on the right knew every dance move and performed perfectly. But it was the left shark, the one who went rogue and danced to his own crazy beat, who stole the show. So don’t ever be a conformist for convenience sake. Or as Mark Twain put it, “Whenever you find yourself on the side of the majority, it’s time to pause and reflect. Be the left shark.” Basically: Live every week like it's (left) shark week.