George W. Bush appointee who beat his wife bloody at the Atlanta Ritz-Carlton exits, ahead of likely impeachment 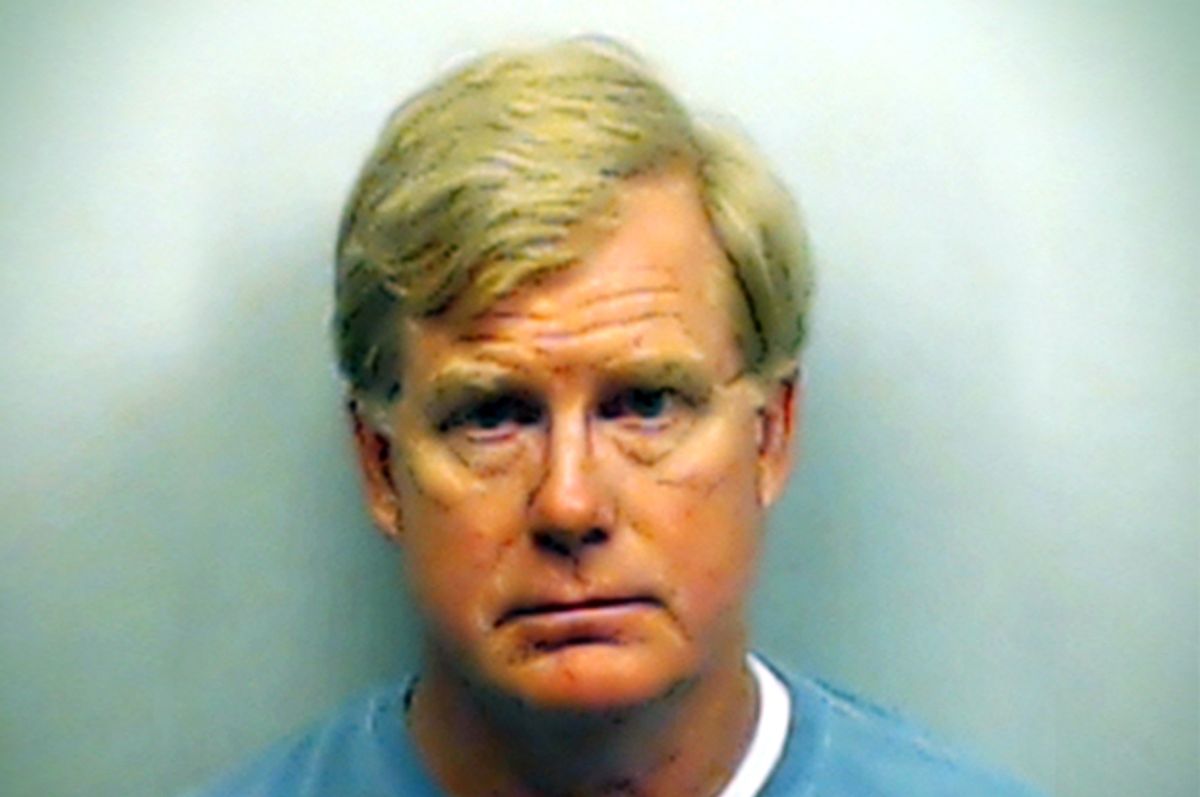 Originally published on THE BRAD BLOG

Over the weekend, the news broke that U.S. District Court Judge Mark E. Fuller (Middle District of Alabama), who was arrested almost one year ago after alleging beating his wife bloody in an Atlanta hotel room, has finally submitted his resignation from the federal bench to President Obama. Previously, through his attorneys, Fuller had strenuously refused to step down, declared his innocence, and insisted that a five-judge Special Committee convened by the 11th Circuit U.S. Court of Appeals to investigate the matter would eventually clear him of wrongdoing.

It appears instead that the panel has found "grounds for impeachment" instead. That finding has been "unanimously adopted" by the Circuit's full Judicial Council which is sending its report and recommendations to the U.S. Judicial Conference. That body, in turn, may then decide whether to recommend the U.S. Congress take up such rare proceedings. Without a federal judge voluntarily stepping down, impeachment by Congress is the only way to remove a sitting federal appointee to the bench.

Fuller, who would not otherwise be eligible to draw retirement pension for another three years, will continue to draw a salary from taxpayers for two more months --- just as he has for the last 10 months --- despite having had his caseload reassigned to other judges in the immediate aftermath of his arrest at the Ritz-Carlton hotel in Atlanta in early August of 2014.

"Justice was not served here," said Rep. Terri Sewell (D-Alabama) in a statement over the weekend in response to the news of Fuller's resignation. Alabama's only Democratic congressmember had long been calling for impeachment proceedings.

"Fuller failed to uphold our most fundamental values," she said. "Perhaps the only consolation is that he has chosen to spare his family and our nation of the expense of a drawn out impeachment process." The rest of the state's Congressional contingent, including its two Republican U.S. Senators who had originally supported Fuller's appointment in 2002, had also called for him to step down. Many offered statements approving of his decision over the weekend to finally step down.

Despite the tendered resignation, however, impeachment proceedings could still legally be carried out in the U.S. House, though the likelihood of that may now somewhat diminished.

We have covered Fuller, who was appointed to his lifetime position on the court in 2002 by George W. Bush, in great detail since news of his arrest became public. Prior to his arrest, Fuller was perhaps best known for having sentenced Alabama's former Gov. Don Siegelman (D) to some seven years in federal prison on questionable "bribery" related charges. That, despite the Judge's own long-apparent conflicts of interest in the case. Before being named to the court, Fuller served as a political operative as the head of the Alabama GOP and his office, when he served as a state prosecutor, had been investigated and criticized for improprieties by the former Governor long before Fuller oversaw Siegelman's trial.

Following his arrest, Fuller was able to strike a plea deal for a pretrial diversion program with the state court in Georgia in order to have his criminal record entirely expunged after just 24 weeks of once-a-week domestic abuse counseling and a court-ordered drug and alcohol evaluation. He was offered the deal by the judge on the premise that the incident at the Ritz-Carlton in Atlanta --- when his wife called 911 in tears, asking for help and claiming that "he's beating on me!" --- was his first infraction. Records from his messy divorce in 2012, however, suggest that there were very similar incidents of physical abuse, as well as drug and alcohol abuse, involving his first wife and their children during the first marriage.

"We sent the wrong message to victims of domestic violence by allowing a federal judge to collect a paycheck --- without managing a caseload --- and ultimately having his record expunged," said Sewell over the weekend.

Judge Fuller's first wife, Lisa Boyd Fuller, had accused Judge Fuller of having an affair with his then court bailiff, Kelli Gregg who he would marry shortly after his divorce from Lisa was finalized. The records from those proceedings were sealed over her "strenous objections." During the incident at the Ritz-Carlton hotel last year, Kelli accused her husband of having an affair with a court clerk.

Though Fuller's two-sentence resignation letter delivered to the president stated that "It has been an honor and privilege to serve," it's likely that the timing of his decision was meant in hopes of avoiding the embarrassment of impeachment by Congress...

"On Monday," according to Atlanta legal news site Daily Report, "the Judicial Council of the U.S. Court of Appeals for the Eleventh Circuit issued an order saying the conduct of Fuller, who was arrested on domestic abuse allegations in Atlanta last summer, 'might constitute one or more grounds for impeachment.' The order referred the matter to the Judicial Conference of the United States, which has the ability to send a judicial discipline matter to the House of Representatives for impeachment."

That one-page order, originally published by the Daily Report, has now been posted here [PDF].

Earlier this year, the Republican-majority U.S. House Judiciary Committee, where impeachment proceedings generally begin in Congress, sought an increase to its budget, specifically in order to cover the costs of such hearings.

In mid-April, long after the 11th Circuit's Special Committee was thought to have completed its investigation, including interviews with a number of witnesses, they reportedly held additional sessions to obtain more witness testimony. Their proceedings have been confidential, though Fuller's Birmingham attorney, Barry Ragsdale, characterized the testimony in exclusive email to The BRAD BLOG as generally clearing his client of wrongdoing.

Ragsdale, responding to the exclusive 911 audio from the incident that we obtained and published here, which suggested that his claims were in contradiction to the available audio evidence, claimed that Kelli was "drunk" and "hysterical" when she called authorities seeking an ambulance. Despite the audio recordings that appear to reveal the woman being repeatedly struck during her phone call to officials, his attorney repeatedly asserted that Fuller "never hit, punched, slapped or kicked" his wife.

While he couldn't tell us precisely what the smacking sounds heard on the audio tape were, Ragsdale said he suspected Kelli had been attempting to "imitate the sounds of slapping" during her call to 911. It seems the 11th Circuit Court may disagree with the attorneys assessment. We have sought a comment from him in the wake of the resignation and court order will update appropriately if a comment is received.

As we reported in September of last year, just weeks after Fuller's arrest, when police reported they arrived at the hotel to find his wife Kelli with lacerations on her face, her hair around the room where she said she was dragged by the Judge, and blood in the bathroom, U.S. Code Title 28, Chapter 17 on "Resignation and Retirement of Justices and Judges" suggests Fuller would not be entitled to his retirement pension upon resignation in this circumstance. Retirement, according to the code, appears to be allowed only after at least 15 years of service, at the age of 65 or older. Fuller is 55 and has served on the bench for only 12 years. Though in a blistering blog item condemning Fuller last year, conservative Senior Judge Richard G. Kopf suggested that a deal could be struck with the Chief Judge of the 11th Circuit and the Circuit's Judicial Council to "Pay him forever as an inducement to resign." Kopf wrote at the time that 28 U.S.C. Â§ 354(a)(2)(A)(ii-iii) & Â§ 354(a)(2)(B)(ii) "gives them that leverage."

It remains unclear at this hour whether Fuller received such a deal in exchange for his weekend resignation letter. The Office of the Circuit Executive of the 11th Circuit has yet to respond to our specific queries on those issues.

In the meantime, as the Montgomery Advertiser noted over the weekend, in addition to the salary that Fuller has enjoyed up until now --- and will continue to enjoy for the next two months through August 1 --- he also "has an extensive financial portfolio" separate from his work as a federal jurist. "He reported 2012 income between $100,000 and $1 million from his stake in Doss of Alabama Inc. and Aureus Aviation Inc.," the paper notes, according to disclosure documents Fuller filed with the court system. "He also reported hundreds of other investments and stock transactions whose value was listed only in wide ranges."

The imprisoned Don Siegelman, however, who Fuller ordered manacled and shuffled off to prison immediately after sentencing --- stunning observers in the court room --- remains a prisoner at the Oakdale Federal Institution in Louisiana. The 11th Circuit Court of Appeals recently declined the popular former governor's motion for a new trial or reduced sentencing based on alleged improprieties by the prosecutors in his case. He is projected to be released in 2017. Last week, however, during an interview on The BradCast, Siegelman's son Joseph told us that his father's legal team is weighing other appeal options, as well as hoping for clemency or pardon from President Obama as a number of legal experts and pundits from both major political parties have called for.

When Judge Kopf, who likely shares a similar political and judicial philosophy as Fuller, wrote about the pretrial diversion agreement that would completely expunge Fuller's criminal record last year, he declared that the disgraced judge had receive "a sweet deal" from the state court. The jury is still out as to whether or not Fuller's agreement to resign has federal post has allowed him to receive yet another sweet deal.

* * *
Some of the audio from Kelli Fuller's August 2014 call to 911 from the Ritz-Carlton Hotel in Atlanta, seeking an ambulance as she claimed her husband, Judge Mark Fuller, was "beating on her", is below. The complete audio tape, as obtained by The BRAD BLOG from Atlanta Police, is posted here.