Dick Cheney reemerges: Bloodthirsty veep is back to promote endless war -- just in time for 2016 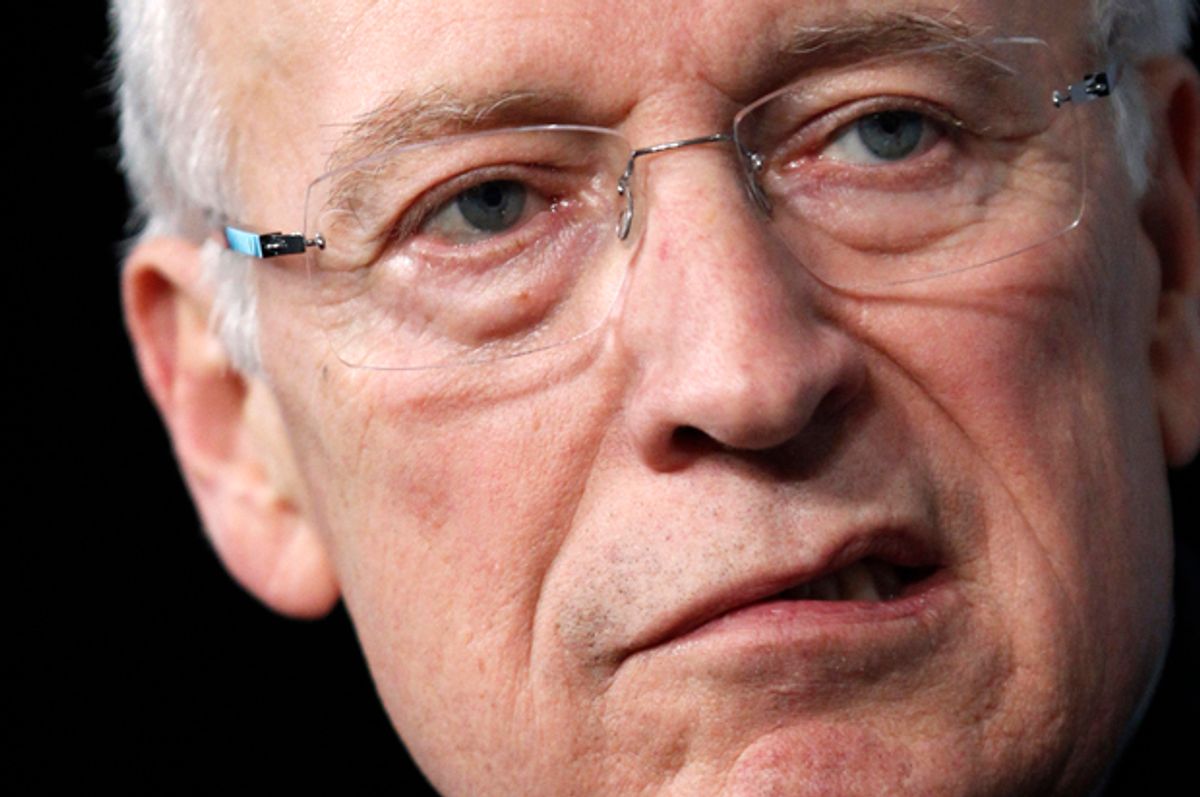 Do you remember what the Alliance for a Strong America is? Don’t feel too bad if you don’t, since there’s really no reason for you to have spent any time thinking about the non-profit group or its mission to “advocate for the policies needed to restore American power and pre-eminence.” But if that name does kindle some faint glimmer of recognition, it’s probably from the glut of press coverage that attended its unveiling around about this time last year.

The Alliance for a Strong America, you see, is Dick Cheney’s dark-money advocacy group. It was founded to fight back against the Obama administration’s foreign policy and educate the public on the need for America to demonstrate its exceptional nature through the vigorous application of explosives to foreign lands. Working with his daughter, failed Senate candidate Liz Cheney, the former vice president was going to remind the American public of just how much danger they are constantly in and how the only way to make the world safe is to blow parts of it up.

That, at least, was the plan. But the Alliance for a Strong America doesn’t really seem to have done much since then. Peruse the Alliance’s website and you’ll see that its main function seems to be occasionally linking to articles from conservative publications bashing Obama or praising Cheney (the last update was from March). The group’s YouTube page boasts just four videos: a launch video featuring Dick and Liz, and three clips of their media appearances (it hasn’t been updated since last August). Liz Cheney told the Casper Star-Tribune last year that she and her father intended for the Alliance to be “a center of gravity” on national security issues and “a place where people can come to get information to help them make a case and help make sure people recognize at the end of the day, our security relies on American strength and power around the world.” If that’s happening, then they’re doing a great job of keeping it a secret.

But now Dick and Liz Cheney are back and renewing the urgent mission they put off for a year. The two have a new book coming out in September, and the former VP just gave a big interview to the Wall Street Journal that can be best described as Classic Cheney – hawkishness, straw men in abundance, and the de rigeur 9/11 fearmongering:

Mr. Cheney acknowledged that the Iraq and Afghanistan wars have made Americans skeptical about foreign intervention, but he also attributed the phenomenon to the country’s relative safety since Sept. 11. “As we got further from 9/11, there was a tendency for a lot of people to say, ‘Let somebody else do it, we’ve done our share,’ ” he said. “Well, that makes no sense at all, if 19 guys with airline tickets and box cutters can take down the World Trade Center and Pentagon.”

We’ve all come to expect that nonsense from Cheney, so there’s nothing particularly new or captivating there. What’s slightly more interesting is his explanation of what he hopes to accomplish going forward with their message of hawkish interventionism. “We thought, looking forward to 2016, it was very important to make sure those issues were front and center in the campaign,” Cheney told the Journal.

If that’s the goal, well then… Mission Accomplished, I guess. A quick glance at the stump speeches from Marco Rubio, Jeb Bush, Chris Christie, Rick Perry, and other 2016 contenders reveals an already dogged embrace of hawkish foreign policy positions. They all talk about bloating the defense budget to maintain a “strong military,” they root the country’s foreign policy in American exceptionalism, they promise to abandon diplomacy with Iran and be more aggressive toward terrorists in Iraq – all the Cheney must-haves for a foreign policy debate. At this point they’re all trying to out-hawk one another as they gang up on "isolationist" Rand Paul. They’re even defending the war Cheney and his pals lied us into.

What, exactly, is Cheney bringing to the table that isn’t already there? Given that the cause of neoconservatism is still broadly accepted among the 2016 Republicans, Cheney's main contribution is his name and glowering visage, neither of which are especially popular outside the realm of conservative activism. One could argue that the smarter play for Cheney, in terms of promoting his ideology, is to just sit back and let the candidates keep doing it for him and not let his reputation become a factor. But that's just not how he operates. He's determined to fight for the hearts and minds of people who still love him and already think like him.

At the very least, though, this renewed focus from Cheney may rejuvenate the listless Alliance for a Strong America and its mission to reeducate the American public on the virtues of neoconservatism – just think of all the Weekly Standard articles it will get to repost now.