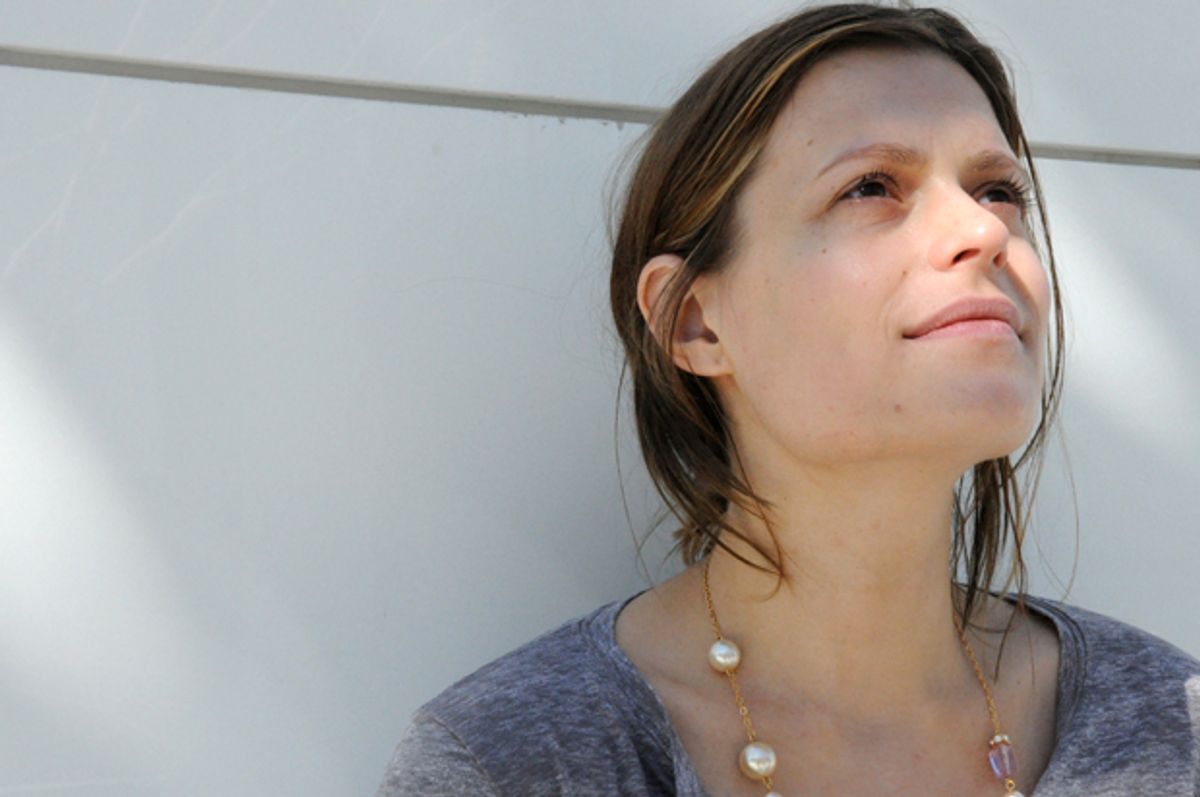 The most remarkable thing about “The Lion’s Mouth Opens,” besides its subject matter, is its brevity: just 27 minutes, from title card to credits. It’s a documentary film that is about as long as an episode of “Girls,” but with her limited canvas, director Lucy Walker creates a brief but vivid journey that is intimate and sublime and educational, a snapshot that is so spare and elegant that it’s as crisp as a new dollar bill.

“The Lion’s Mouth Opens” screened as a film short at various festivals; it debuts on HBO tonight. And though HBO films are often conversation starters, this one is truly remarkable—a short exploration of one deeply awful question and one woman’s particular journey that manages to escape both maudlin sentimentality and grim despair, offering up humanity to its subject and its audience.

Walker’s film follows Marianna Palka, a 32-year-old artist, through one night and the following morning, an hours-long period leading up to a doctor’s appointment where a neurologist will hand her an envelope with printed-out results inside. The results will either tell Palka that she has inherited a gene from her father or that she hasn’t. And that gene will determine the course of the rest of her life, for (very) good or (very) ill: Palka is being tested for Huntington’s disease. The hereditary illness is one that eats away at both body and mind, simultaneously; as a friend of Palka’s says in the documentary, it’s sort of like Parkinson’s and Alzheimer’s, combined. It’s rare, but those who suffer from it, suffer disproportionately—not just their own illness, but the illness of their closest relatives, as well. The disease is purely hereditary; you either have it or you don’t. There is no cure.

Huntington’s disease is singularly gripping for offering its patients its own version of devil’s fruit: knowing the shape and general course of their death, and further knowing there’s nothing that can be done about it. Genetic testing for Huntington’s plays a role only oracles and soothsayers could have done in the past. But nothing in between the time of Delphi and today has prepared us for the burden of that knowledge, of knowing too well our own fates. But the journey “The Lion’s Mouth Opens” describes is far more universal than just the experience of Huntington’s disease. The story is of coming to terms with the inevitability of death, in whatever guise it comes to us—in not just knowing it will come, but in truly internalizing and anticipating its arrival. Not everyone has to come to terms with death, of course. But everyone has to die.

It’s an uncomfortable piece of knowledge for television, that medium that is so poorly suited to endings, so rarely truly off-air, so divorced from the idea of eternal silence. TV is always on, even when your own set is off; not just one channel, but thousands. Someone, somewhere, is always watching “Law And Order”; TV is a reminder that we’re all somewhat alive, looking to pass the time. As such it’s always had a reputation for being an “idiot box,” a “boob tube.” Before TV had graceful story arcs on prestige dramas, it had incessant voices in every language assuring us that we weren’t alone.

And yet “The Lion’s Mouth Opens” is not even the first recent TV production to tackle the reality of death in such a direct, uncompromising way. HBO’s “Six Feet Under,” which debuted in 2001, remains the most resonant drama of our era on death and dying in American culture, as told through the story of the Fisher family, who owns and operates a funeral home. But in the last few years, multiple networks have increased their offerings on death and dying, reflecting the aging population, advances in medical science, and—perhaps—a cultural void in knowing how to process death, as social fabric has rapidly changed in the last several decades.

Showtime’s “Time Of Death,” from 2013, followed eight subjects over the course of six hours, examining with rigor the literal process of dying—paperwork, last wishes, final conversations, and even the slow process of letting go of the material world, as more than one participant drew their last breath on-camera. All of these deaths were deaths that could be foreseen in advance, although not with such precision and hopelessness as Huntington’s disease. But while the knowledge was painful, it was also an opportunity for the participants to put their affairs in order—to reach out to estranged loved ones, settle lingering matters of inheritance and custody, and plan a worthwhile funeral for those left behind afterwards. The program’s intimacy and comfort with death—mediated primarily through hospice nurses—is quite unlike anything I’ve seen before.

Then there’s the PBS miniseries “Cancer: The Emperor Of All Maladies,” from earlier this year, based on Siddharta Mukerjee’s Pulitzer Prize-winning book on humanity’s struggle against the disease. Produced by Ken Burns, whose own mother died of cancer when he was a child, the series has a distinctly historic bent—but the informative aspect does not resonate without the personal, where patient after patient battles cancer and more than one angelic-looking child loses the fight. Like “Time Of Death,” “Cancer: The Emperor Of All Maladies” is unafraid to tell the stories of subjects who will die during filming. The patients range in age, offering a sad but very human diversity of suffering.

HBO’s 2013 sitcom “Getting On”—criminally under-discussed, but returning for one final season before cancellation—is one of the darkest and most brilliant takes, opting for all of the dark humor of “Six Feet Under” without any of the resulting pathos. It follows the self-absorbed, usually incompetent staff of a long-term geriatric care hospital ward, with the bite and sting of British humor that will remind American viewers of Ricky Gervais in “The Office.” Patients die on-screen in “Getting On” (which is an adaptation of a British series) as they do in the documentary series “Time Of Death,” but in “Getting On” it’s horribly funny, an indication of incompetence, misplaced humanity, and the futility of human endeavors, both in life and in death. And speaking of Ricky Gervais, Netflix’s “Derek,” which debuted in 2012, goes for a similar approach, starring writer/creator/director Gervais as a care worker in a home for the elderly. Both are shows about living with death—built around characters and institutions that literally do live with death, in their workplace.

And numerous other recent offerings delve into late aging, which if not directly dealing with death, implicitly encompasses much of the modern concerns with it. A few scant decades ago, building ongoing stories around 70-something characters and similarly aged actors would have been unthinkable; now it’s approaching commonplace. In 2012 PBS debuted the British series “Last Tango In Halifax,” about two septuagenarians who end up falling in love and getting married in the twilight of their lives. In that tea-cozy romance, though missed connections and class clashes make up the substance of the plot, the specter of imminent death—and making plans to handle it gracefully—haunts the entire series, as both leads suffer from health scares. A similar strain runs through Netflix’s “Grace And Frankie,” a story about divorce and a second lease on life that focuses on two 70-something women who are navigating medication, fine lines, and loneliness along with the regular old concerns of heartbreak and loss. And that show nods to Amazon Studios’ “Transparent,” which is also about a 70-year-old trying to manage a gender transition well after most trans people attempt it. PBS, hitting the nail on the head, also aired a special last month called “Caring For Mom & Dad,” an hour on caretaking for the elderly.

The title of “The Lion’s Mouth Opens” is a fragment from Bob Dylan’s “Last Thoughts On Woody Guthrie,” from the younger folk legend to the elder. “And the lion’s mouth opens and you’re staring at his teeth / and his jaws start closing with you underneath / and you’re flat on your belly with your hands tied behind / and you wish you’d never taken that last detour sign…”

Dylan’s ode to Guthrie was written after he visited the ailing Guthrie at the age of 19, and what the younger musician saw was a folk legend no longer quite himself. Guthrie died at the age of 55 of complications due to Huntington’s disease—so, naturally, the story resonated with the documentary’s subject, Marianna Palka. So much so that at dinner with her friends, the night before she finds out her fate, she recites most of the poem from memory. “Last Thoughts On Woody Guthrie” is a poem about a man warring with himself—or, to be exact, a man at odds with the inevitable forces of the universe, forces which are making themselves known through the sudden betrayals of his own body. Dylan’s hero facing the lion’s mouth is singular not for dangling over the lion’s mouth, but for being able to see its shiny, sharp teeth.

“The Lion’s Mouth Opens” is neither despairing nor hopeful, but endearingly and unsparingly practical: A story of living with both the astounding advances of medical science and its remaining limitations, a story of living with too much understanding of the future and simultaneously too little—a story, really, of navigating both the known and the unknown, as the balance between the two grows fraught, and the day grows dim, and we all wish we had not taken that last detour sign. Palka’s slim white envelope is a death sentence, but we all live with our own death sentences. What television offers with these many narratives is a chance to look at the lion’s mouth opening, and determine, hopefully, to set ourselves in order before our hands our tied.