"Game of Thrones" politics: When alliances aren't about friendship — they're about survival

Troubled are the peacemakers, as Jon and Dany make alliances for the future from across two borders 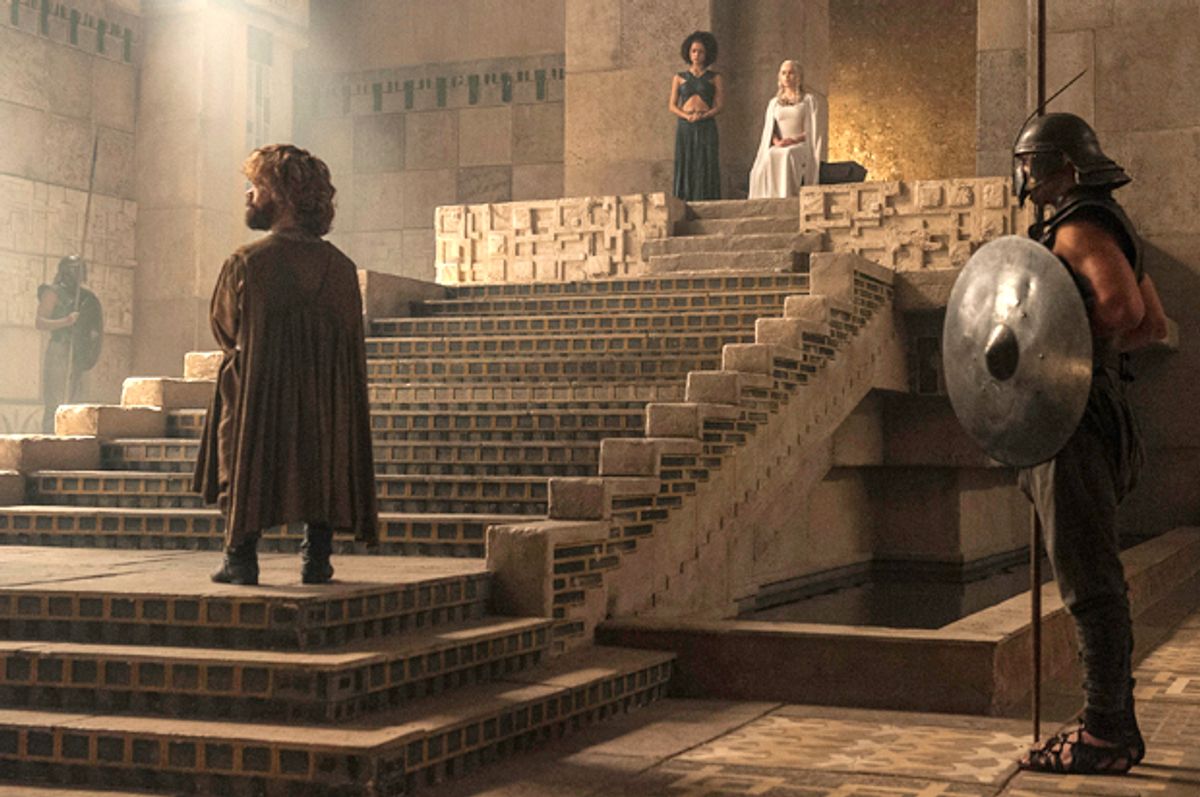 Keen-eyed observers have noted that Game of Thrones Season 5 has been thematically pairing Jon Snow with Daenerys Targaryen, two rulers struggling with how to make peace in a particularly nasty world. In “Hardhome,” both of these leaders make strides in their project (or at least come to a better understanding of that project) by being made to come to terms with cold reality.

In Meereen, Tyrion and Dany build a fragile alliance between “two terrible children of two terrible fathers.” Their rapport is awkward — it can’t be otherwise, given their blood-soaked family history — but it’s building on their shared belief that political power can be used to “build a better world” that Varys believed in, and which Tyrion is beginning to believe in spite of himself. But at the end of the day, Dany recognizes that “you can’t build a better world on your own, you have no one on your side who understands the land you want to rule.” Even before he’s officially brought on as an adviser to the Queen, Tyrion can’t keep himself from doing the job anyway — pointing out to Dany that it’s a bad idea to have people who are devoted to you killed, even if you can’t trust them. And from the way that Jorah seems determined to fight and die for Dany, it’s pretty clear he’s right about that.

More importantly, Tyrion provides Dany with both important questions and useful advice about her larger mission. While Dany has agonized over whether she can be a ruler without being a butcher, Tyrion brings a bit of Machiavellian logic to the table. Rulers need to be “the right kind of terrible” in order to prevent “her people from being even more terrible,” especially when those rulers have revolutionary ambitions. And Dany’s ambitions are revolutionary indeed – not content with remaking Slaver’s Bay into a world where “no child born into Slaver’s Bay would ever know what it meant to be bought or sold,” Dany wants to bring her egalitarian crusade to Westeros, where the Great Houses are “crushing those on the ground.” Tyrion offers caution, noting that while “it’s a beautiful dream, stopping the wheel. You’re not the first person who’s ever dreamt it.” Many would-be reformers, like Aegon V (Aemon’s brother, who he dreamed of shortly before his death), tried and failed to bring some justice to the feudal society of Westeros. But Dany has one thing that they lacked – dragons. When she says that “I’m not going to stop the wheel. I’m going to break the wheel,” she might be able to pull that off…if she’s willing to pay the price.

On the other end of the known world, Jon Snow finally gets the chance to make his pitch to the wildlings and lays out his agenda – “come with me and I’ll give you these weapons,” the legendary dragonglass that can kill the others, as well as “good lands south of the Wall” for them to settle on, if the wildlings “swear you’ll join us when the real war begins.” It’s not an easy pitch to make – at Hardhome and Castle Black, the memories of the dead, the injustices committed by both sides against the other, are hard to put aside. But as Tormund Giantsbane says, it takes “courage to make peace.” Courage, and some clarity.

Jon Snow’s best argument to the wildlings, arguably the argument he should have made to the Night’s Watch when he announced this mission, is utterly pragmatic: “We’re not friends. We’ve never been friends. We won’t become friends today…This isn’t about friendship. This is about survival. This is about putting a 700 foot wall between you and what’s out there…These aren’t normal times. The White Walkers don’t care if a man’s Free Folk or Crow. We’re all meat for their army.”

Luckily and unluckily for the Lord Commander, his argument is put to the test immediately, when the “army of the dead” comes to Hardhome with the same chilling speed of an avalanche.  Jon Snow’s words may only have persuaded 5,000 of the wildlings to come with him, but the moment the shouting stops and the dead begin beating their way through Hardhome’s wooden walls, the divisions between Night’s Watch and Wildlings fade away as if they’d never existed. In the chaotic scrum, we see ancient enemies fighting and dying at each other’s side, to give some of the survivors enough time to make it to the boats and to safety.

But dashing Jon Snow’s hopes that their two clans united could defeat the White Walkers, the fragile line of human defenders collapses in seconds. And while Jon Snow manages to kill one of the White Walkers with his Valyrian steel sword Longclaw, his individual heroism, while undeniably impressive, can’t change the mathematics of loss.  Thousands of men, women and children are dying around him, and there’s only one Valyrian steel sword to go around.

So rather than a moment of triumph so often seen in epic fantasy, Jon Snow ends the episode awed and terrified at the scale of the threat to peace he’s confronted with. When the Night’s King emerges and sends the walking dead over the cliffs like a human wave, the wooden walls of Hardhome come crashing down. When the Night’s King raises his arms in challenge, the freshly dead rise again and the army of the dead is larger than ever. What can ordinary men and women do against that?

Ultimately, Jon Snow’s road to peace is going to pass through one of two sovereigns. With the  precious cache of dragonglass, carefully preserved at the Fist of the First Men and brought by Samwell Tarly all the way back to Castle Black, lost at Hardhome, his only hope for more lies with Stannis Baratheon, who controls an entire mine’s worth on Dragonstone. Alternatively, the Night’s Watch could turn to Daenerys Targaryen, whose dragons might be the only force on earth as powerful as the White Walkers.

This ultimately brings us to the Game of Thrones, that wheel that Dany wants to break. There will be many who say in the wake of this episode that the political conflict that has taken center stage for so long is ultimately a sideshow to the real conflict. But I think we see in this choice the critical importance of that conflict – the struggle for control of the North has lured Stannis to the snowdrifts outside of Winterfell, and thus has placed in jeopardy the Night’s Watch’s access to one of the few weapons that can slay their enemy. And the question of whether the Great Houses of Westeros will accept or deny Dany may ultimately decide whether the Mother of Dragons will be mired in mundane conquest in the south, or make it to the Wall in time for the second Battle for the Dawn.