"Game of Thrones" recap: An epic battle previews the horror of winter to come

Dany and Tyrion debate their futures, but what Jon sees north of the Wall suggests it might all be for nothing 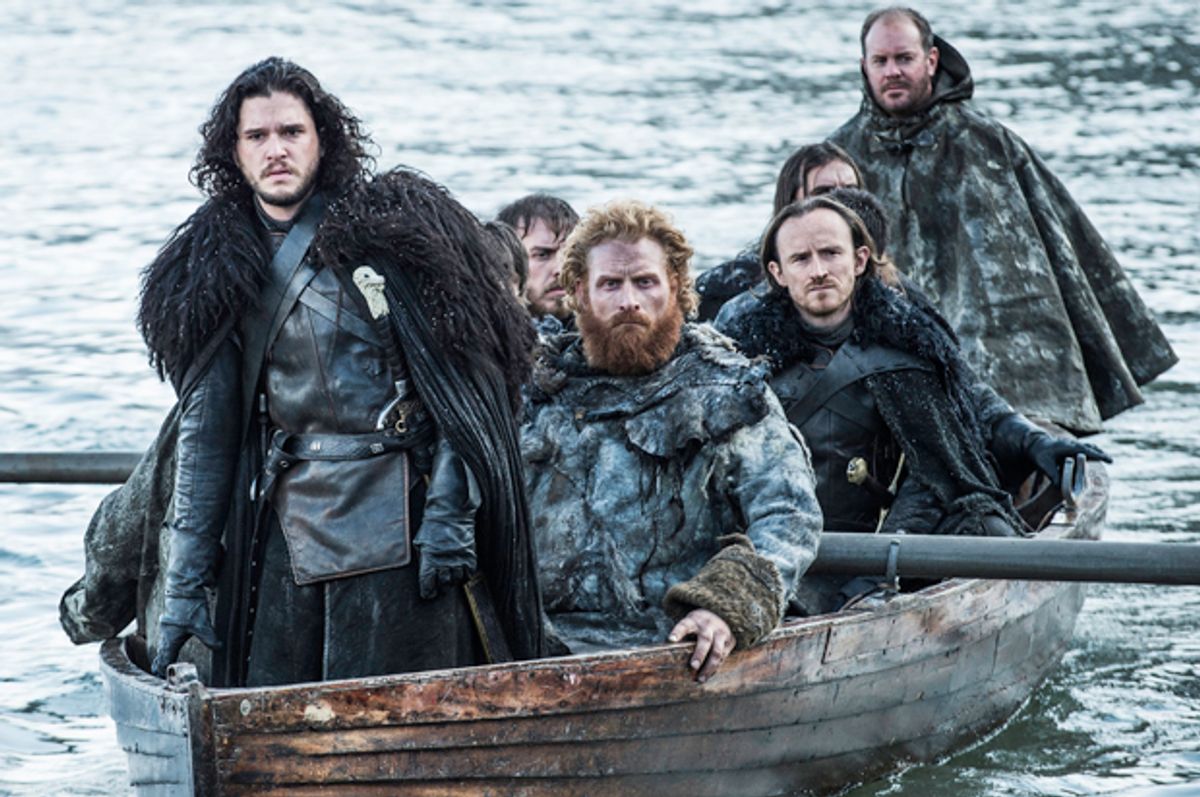 Most shows, when they choose to make a point about the larger world their characters inhabit, go about it in a number of different ways, from layering in subtle metaphors, to layering in more obvious metaphors, to, well, unleashing an undead army on their universe in order to remind everyone what’s really at stake in their world. “Hardhome,” the eighth episode of “Game of Thrones” fifth season, is making quite the statement about how it feels its characters are spending their time, giving over fully half of the episode to a series of brilliant scenes full of revelations that would have made any other episode of the series top notch, before serving up a dose of reality in the back half so devastating that it makes the earlier events look like so much deck chair rearranging.

The episode opens where everyone hoped it would, picking up where we left off in the “New Adventures of Dany and Tyrion.” Dany allows Tyrion to make his case for not being killed, which Tyrion counters by allowing Dany to make her case for why she’s the woman to unite Westeros. After an extended bout of intellectual wordplay from two of the universe’s most adept talkers, Dany decides to test Tyrion’s advisory powers and asks what’s to be done with Jorah, given that he is a traitor and she swore to kill him if he ever returned to her presence. Tyrion talks through his logic, making a strong case for sparing Jorah’s life, opining, “A ruler who kills those devoted to her is not a ruler who inspires devotion,” advice so relevant that Dany is probably kicking herself that Tyrion didn’t show up four episodes ago. But all the same, given his betrayal, Jorah can’t be allowed to return to Dany’s confidences and must be shunned. Dany takes the advice to heart and sends Jorah away, after which Jorah returns to the slave owner demanding he be able to return to the fighting pits and, essentially, giving away his life.

Tyrion and Dany are moderately more friendly in a later scene, where the two shoot the shit over some wine. They’re an odd pair, to be sure, but they have more in common than one would originally expect — namely terrible, terrible fathers. Tyrion makes a case for Varys, someone Dany is highly suspicious of, given his history of ratting her out to the powers-that-be in King’s Landing, and tells her that he’s the only person in the world who Tyrion trusts, other than Jaime. Dany tells him that he won’t be killed and that she wants him to come on as her adviser, immediately asking how she should take the iron throne. Just as quickly, Tyrion shows how unafraid he is to tell Dany things she doesn’t want to hear, suggesting that perhaps it’s ill-advised to try to take over Westeros, given her lack of support there. He says that perhaps she can do the most good where she is right now, but Dany will have none of it. She in turn informs him that she has no intention of returning to King’s Landing and participating in the lineage wheel that takes turns ruling Westeros. She intends, once and for all, to break it.

Meanwhile, Arya has finally readied herself to take on a new identity and has reinvented herself as Lana, the orphan girl oyster seller. Once established, Jaqen instructs Arya to alter her routine and begin to observe her surroundings carefully. What Arya sees is a crooked old man, who cheats widows and their children out of money that is rightfully theirs, leaving only the Many-Faced God to help them. Jaqen then instructs Arya to, when the time is right, poison the man, an instruction that she takes warily, but does not refuse. This sequence spent as Lana is lovely and cinematic, as though Arya has somehow stumbled out of the bleak dreary world of “Game of Thrones” and into a droll little French film, full of light and life and fresh oysters.

Sansa, however, isn’t lucky enough to find herself in such (relatively) improved circumstances, still trapped in her room, but now with no hope of escape. She accosts Theon for his betrayal and in his defense Theon says that there is no escape and that he only wanted to keep her from being hurt in the end, then detailing just what it was Ramsay did to him when he hunted him down. Sansa is far from moved, telling Theon that she would do the same to him if she had the chance, because of how he betrayed her family. Theon, given that he is a completely broken-down shadow person, agrees with her roundly, only stumbling when speaking of Bran and Rickon, which Sansa picks up on immediately, leading to the long-awaited reveal that in the stead of the Stark boys, Theon killed and burned two farm boys. Theon flees before he can say any more and Sansa seems rightfully overwhelmed at the realization that she may not actually be alone in the world.

These are all important scenes with large implications for the future, concerning things that could and should fill the characters minds at all times. Yet, in the words of the inimitable Freddie Mercury, nothing really matters.

The reason for that is that halfway through the episode Jon and his merry band of Free Folk arrive at the eponymous Hardhome and attempt to convince its inhabitants to join their ranks in the hopes of staving off the undead army that rides with winter. They spend a tense 10 minutes arguing about loyalty and trust and at one point Jon even takes responsibility for the death of Mance Rayder, a deeply unpopular admission. In the end, the Free Folk are split, some deciding to leave with Jon, others deciding to stay behind. Tormund, though, assures Jon that the ones who lag will be forced to join them sooner or later thanks to dwindling food supplies.

That, however, turns out to be a false statement because as they begin loading the boats, a storm rises in the North and brings with it the dead. The final 20 minutes of the episode is given over to perhaps the best battle sequence the show has done to date. Centered around a huge wall, the audience never loses orientation and, despite having only been introduced to Hardhome 10 minutes earlier, they always retain a clear sense of what’s happening where. There’s also a matter of scope, with thousands upon thousands of fighting skeletons (also known as wights) descending upon the wildlings and the Watch and laying waste. It’s a breathtaking sequence visually, but also dramatically, as it’s less battle than slaughter, like fighting a video game boss without properly leveling up.

As compelling as the first half of “Hardhome” is, it is nothing compared to the back half, only because the back half renders everything else moot. It doesn’t matter who sits on the Iron Throne, who Arya might become, what Starks might still live. It doesn’t matter who takes Winterfell or if Cersei gets out of her cell or what grayscale means for Jorah’s future. The only thing that matters is that death is marching closer and there is no way to stop it.

The most important shot of the entirety of the episode happened briefly and without dialogue. Jon looks up, gauging the coming onslaught, and notices standing on the bluffs above four mounted white walkers. Observing. Waiting. Watching. It’s the end of the world and the four horseman have arrived to usher it in.

“Hardhome” isn’t winter, it’s merely a teaser. It’s the surprise October blizzard that knocks you sideways and leaves you wondering how you survive it year after year. It’s a portent that even the most skeptical doubters can’t wave away. Winter is coming.

And there’s nothing you can do to stop it.

Cersei does not seem to be taking to prison well. Shame.

Stannis continues to approach Winterfell, and while Roose Bolton is happy to hole up and wait for him to freeze to death, Ramsay thinks it more appropriate to go out and stir shit up, shockingly. He assures his father he only needs a few dozen men to get the job done. I am skeptical.

That was Birgitte Hjort Sørensen of “Borgen” as the prominent female wildling, now wight. She is great and should be in more things.

We also learn that Jon’s sword, made of Valyrian steel, is also able to vanquish white walkers. Good to know.

Next week is episode nine. Previous episode nines have included the death of Ned Stark, the battle of Blackwater, the Red Wedding, Blackwater Part Two, Electric Bugaloo (otherwise known as the Battle of Castle Black.) Basically what I’m saying is that if history has taught us anything, you should hold on to your butts.