Reports of the Patriot Act's death are greatly exaggerated

Provisions of the surveillance law expired last night, but that doesn't mean Rand's grandstanding was a success 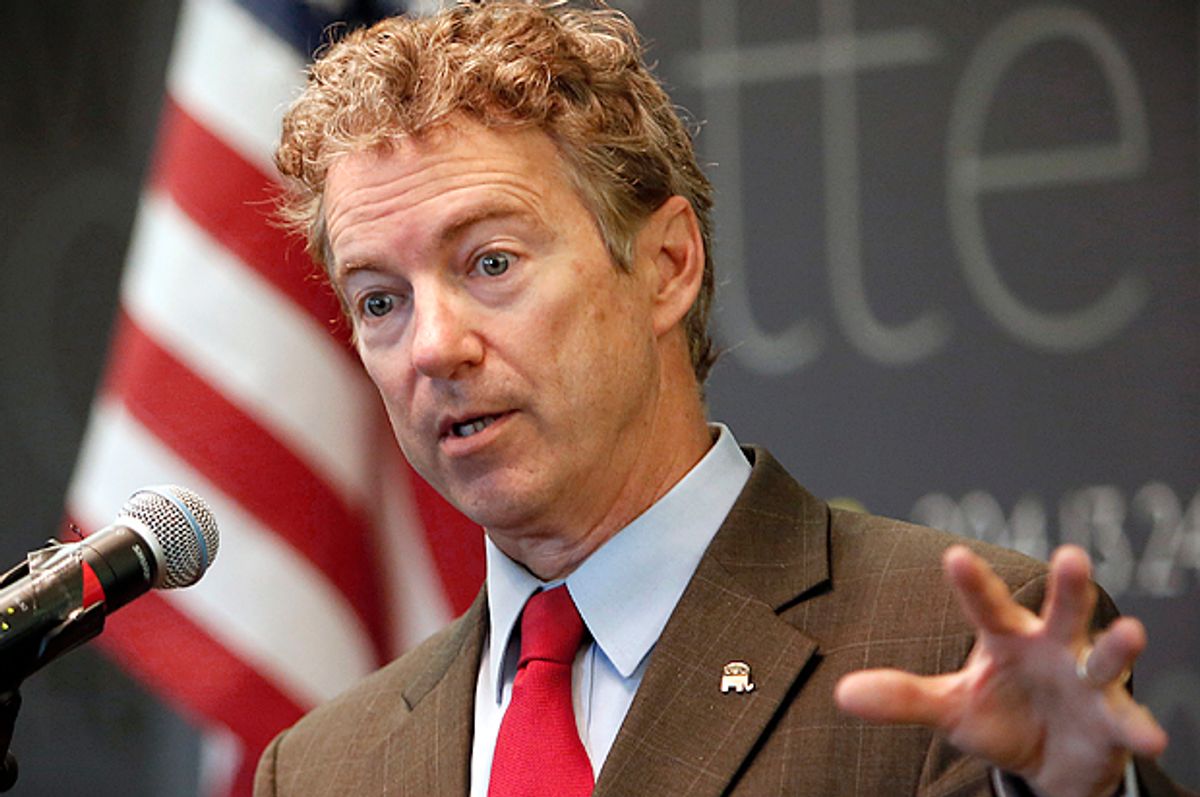 The PATRIOT Act-authorized phone dragnet expired last night. For the first time since 2006, the NSA won't receive records of the phone calls you make within the United States.

But that doesn't mean spying on Americans has stopped. The NSA still obtains records of calls -- potentially all calls -- you make with people overseas. It still tracks Americans' Internet communications using metadata obtained overseas. The FBI can still access the content of any communications Americans have with foreigners targeted under PRISM without a warrant or even any evidence of wrong doing. FBI can still, and indeed does, obtain phone records of individuals in conjunction with national security investigations without any court review.

Not even the spying conducted under Section 215 -- the authority that had been used to collect all of Americans' phone records, but which is also used to collect certain kinds of Internet data -- or the two other expiring provisions will stop. Because they're tied to more focused investigations (though the Internet collection is probably not targeted at one individual), they will probably continue under a grandfather clause allowing ongoing investigations using those authorities to continue.

So in spite of all the alarmism you're hearing, not much changed today. A phone dragnet that has never stopped a terrorist was shut down, but will probably be restarted later this week or next, for at least 6 months.

Rand Paul is getting credit (or being blamed) for the lapse in the program. But that's actually not correct. As Harry Reid and Patrick Leahy laid out in speeches last night, Majority Leader Mitch McConnell set up this lapse by delaying considering of the House-passed USA Freedom Act. While McConnell would have preferred a short-term extension, creating urgency that would give the Senate more leverage to weaken the so-called reform bill, he clearly wanted to foster the sense of crisis. But this deliberately manufactured crisis just got away from him.

McConnell will now use the claims of crisis to try to push through changes he and other surveillance hawks have been demanding for a year -- things like forcing providers to retain metadata they otherwise have no need for and delaying the end of the dragnet program an extra six months.

Probably -- as Rand Paul admitted last night -- that's what will happen: A weaker bill will be rushed through the House. If it is too much weaker, it will face further delay, and maybe defeat; but on some issues, like data retention, McConnell is actually asking for less than providers have already agreed to. If turnover to the new program is extended too long, the ACLU may have legal means to muck up the transition.

The biggest outcome of the last two weeks, then, may ultimately stem from the misperception that Rand Paul has caused this delay and not Mitch McConnell. Mitch McConnell will still get what he wanted all along, but Paul will get credit for fighting a good fight.

And that has political implications.

Already, the debate over the expiring PATRIOT provisions has been inflected by considerations about the 2016 election. Rep. Chris Van Hollen (D-Md.) voted against USA Freedom in the House, probably because his more progressive opponent in a 2016 Senate primary, Donna Edwards, did. Sen. Ron Johnson (R-Wisc.) voted for cloture for USA Freedom in the Senate last week, probably because civil liberties champion Russ Feingold will challenge him for the Senate next year.

But the attention Paul has gotten for his stand against the PATRIOT Act may have the most import. He is running for President against a bus-load of hawkish candidates (as well as Ted Cruz, whose claim to support civil liberties sometimes takes a back seat to his hawkish foreign policy). Significantly, Paul spent Saturday campaigning on civil liberties in South Carolina, an early primary state. Perhaps because Paul was so well received, Lindsey Graham (who will announce he, too, is joining the crowded Presidential race today) didn't even vote last night.

Surveillance hawks are a dime a dozen in the Republican presidential primary right now. Paul has laid claim -- one Cruz will surely dispute -- to be the one option voters will have to rein in surveillance (never mind that once people become president, they rarely rein in authority their predecessors have expanded). If nothing else, this debate on the PATRIOT Act has made surveillance a 2016 political issue.

People across the political spectrum have dismissed Paul's tactics as political grandstanding, as if bloodthirsty hawkishness is not itself grandstanding. But underlying that dismissiveness is also an awareness that Paul has made civil liberties a political issue, one DC insiders would rather not have to campaign on.

Like or hate Rand Paul. Agree or disagree with his political calculus about the bill. But until civil liberties becomes an issue that can influence elections, there will be little incentive in D.C., especially among politicians heavily funded by defense contractors who profit from expansive surveillance, to defend them.