What if Rand Paul were Muslim? The white, privileged assumptions behind his Patriot Act "principles"

Paul never had to fight assumptions based on his color or ethnicity. If he had, he'd feel different about bulk data 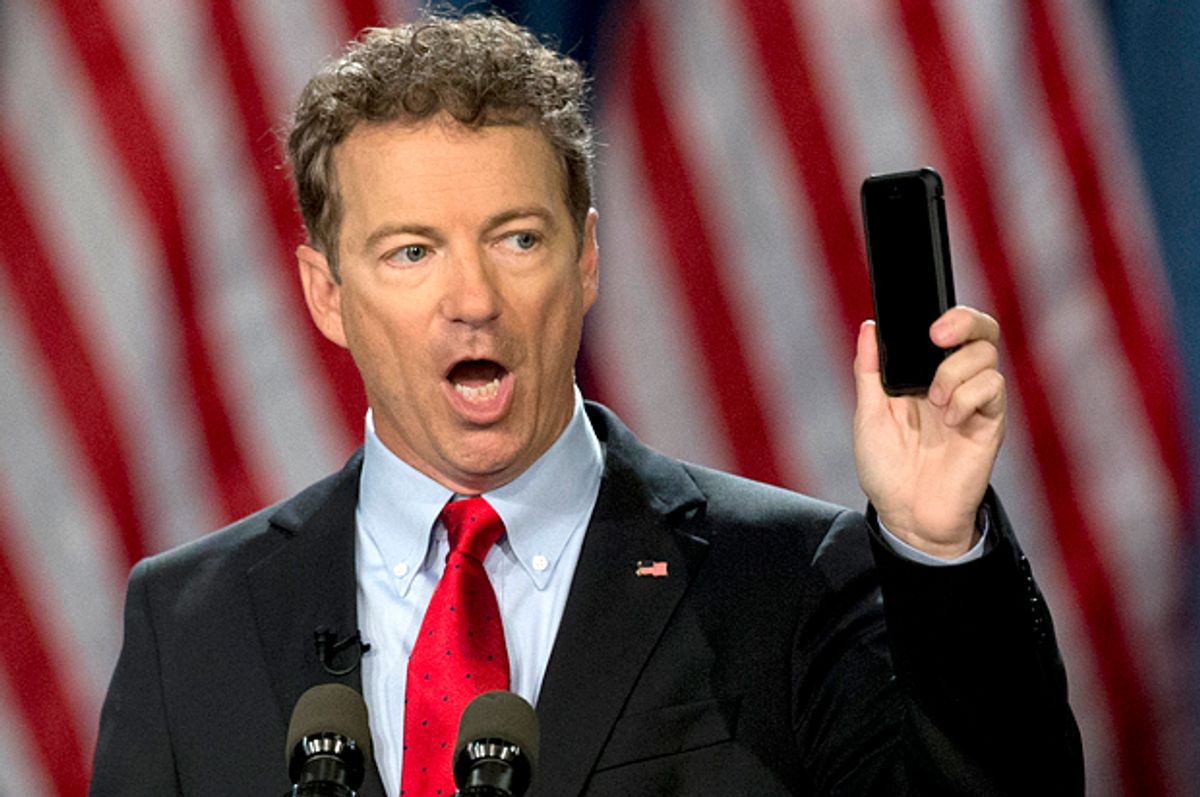 I spent three years as a double-agent for the FBI working undercover to counter Russian military intelligence collection efforts in New York City. My job was to convince the Russians that I was an authentic spy, willing to betray his country for cold hard cash. I believe they were willing to recruit me, in part, because I’m a first-generation American and the son of a Pakistan-born father.  It was imagined that I had conflicting allegiances – a perception I played to.  However, over time this assumption that my heritage makes me more prone to sell out my country has come to bother me immensely. Granted, I used the Russians’ own biases against them, but isn’t there a better way to determine loyalty than the color of my skin or my parent’s birthplace?

In fact, there is -- the bulk data approach used by the National Security Agency.

In preparation for my role as a double agent, I read as much as I could about America's worst spies.  What I learned is that what makes an individual willing to betray his or her country is highly personal. Are there, however, characteristics or traits that can help identify those who are more likely to commit espionage? On February 19, 1942, shortly after the attack on Pearl Harbor, President Roosevelt issued Executive Order 9066 which authorized the U.S. Government to deport and incarcerate "persons of Japanese ancestry." Yet in spite of the way loyal Japanese Americans were perceived, some 20,000 of them served in the Armed Forces. Twenty-two Asian Americans were even awarded the Medal of Honor. Clearly, being of Japanese descent at the commencement of World War II did not mean that an American was more likely to not be loyal -- so why, six decades later, do intelligence operatives from Russia and elsewhere continue to use ancestry as part of their spy profile?

I can't speak for every child of immigrants, but in my case being first generation made me want to be the most American I could. Indeed, my background pushed me to want to serve.  However, after my time as a double agent ended, I found myself fighting a new battle: The Assumption War. Based on nothing but my last name, people assumed that my stint with the FBI had involved terrorism. I know this because even now I constantly field questions like "Where were you born?" or "Are you Sunni or Shia?"  As soon as those questions are asked, I feel that all of the work I’ve done, from fighting to expose the Russians to joining the military (activities that prove my loyalty), is erased and I’m nothing but my last name.

Ancestry bias, which is not confined to Russian intelligence operatives but is widespread, makes me a staunch supporter of any method or system that brings an objective approach to identifying potential spies and terrorists. As an intelligence professional I’ve been taught to be aware of my natural bias when analyzing information. I’ve been encouraged to not draw conclusions first and then look for information to support a claim, but, rather, to let the information dictate the conclusion. Which is why I have no qualms about taking a wide-net, mass-data approach rather than selectively profiling based on background or heritage. I see no point in removing a powerful tool that encourages an evidence-based approach to intelligence gathering.

Perhaps to those like Sen. Rand Paul who’ve never had to fight assumptions based on one’s ethnicity or the color of one’s skin, the thought of cell phone data being pooled and analyzed is disconcerting. However, as someone who regularly puts up with extra scrutiny, whether it’s at an airport or a shopping mall, I welcome the leveling of the playing field that bulk data collection brings.  I urge our government not to follow the Russian method of profiling, but, instead, to use bulk data collection to arrive at objective analyses.

Naveed Jamali is a former double agent whose story is told in HOW TO CATCH A RUSSIAN SPY, to be published by Scribner on June 23