Love (or just love to hate) "The Bachelor?" Wait until you see its fictional twin, "Everlasting" 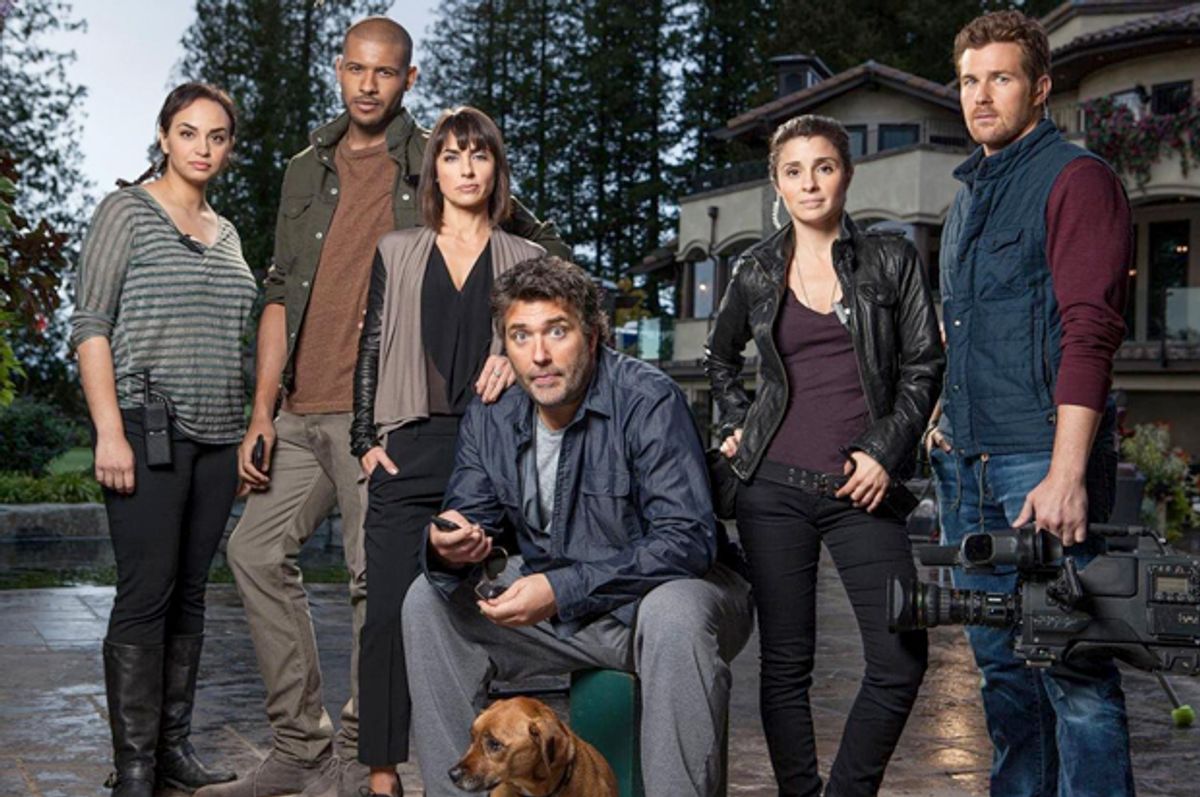 “UnREAL,” Lifetime’s excellent new scripted series about life behind the scenes of a “Bachelor"-esque reality dating show, has the potential to charm both devoted “Bachelor” fans and hardened critics of dating shows and their ilk. Haters will delight in seeing their basest notions about reality television confirmed (as well as being treated to smarter and more high-brow scripted fare than Lifetime has traditionally been known for) while devoted fans will relish the riffs on familiar tropes in a show that, as Margaret Lyons puts it, ”walks the line between tribute and parody.”

The show is produced by former “Bachelor” producer Sarah Gertrude Shapiro and "Buffy the Vampire Slayer" producer and writer Marti Noxon, and stars Shiri Appelby as Rachel, a beleaguered young producer returning to work on "Everlasting" after suffering a very public breakdown on-set last season. Rachel is something of a reality dating savant — she has a special gift for wrangling and manipulating the contestants into the overblown histrionics required for good television. Yet as her breakdown illustrates, the job is not without consequences, and she returns nursing a deep well of guilt at the human toll her work causes, while still trying to wiggle back into the good graces of show-runner Quinn (a wonderfully ruthless Constance Zimmer).

As someone whose job it is to analyze pop culture, the "Bachelor" franchise is one of my favorite things to write about, because there’s just so much to unpack. Like all reality TV, it veers between authentic human drama and absurd artifice, and the fun lies in finding out where exactly the cracks in the seams are. “UnREAL” functions in the same way as much “Bachelor” criticism and analysis does, stripping apart the show’s artifice while still not dismissing the power of its illusion. As Jon Caramanica writes in the New York Times, ““UnREAL” uses that access as a tool to ask questions about these sorts of programs: not just about how they operate — savagely, if its stories are to be believed — but also why participants on both sides of the camera subject themselves to them.”

In fact, I’d wager that the target demo for the show is, well, someone exactly like me (and the hordes of "Bachelor" recappers who tune in with masochistic pleasure each week), someone who loves reality TV but also loves to tear it down a peg, to interrogate why we are dumb enough to buy into these stories, while buying into them a little bit all the same. As Shapiro has explained, the show is more than just satire: “We were like, 'We're not making fun of something.' The genre is already so meta at this point that it's self-referential on its own. A purely cynical take on this is sort of lazy and not interesting.”

Here are five aspects of the show that "Bachelor" lovers, haters and everyone in between will be able to chew over and dissect over the course of the season.

While there are no roses, “Everlasting” shares almost all the visual tropes of the “Bachelor” — the sprawling stucco California mansion lit with shimmering tea-lights, the rainbow of pageant gowns, the dramatic contestant entrances (there is no motorized cupcake car, but there is a violin player exiting a Cinderella carriage). “Everlasting” reproduces the shiny, fairytale world of dating shows and simultaneously also reveals them to be an illusion, as camera crews, producers and handlers swarm the show’s set, laying bare the artifice of the world constructed onscreen. A few "Bachelor/ette" alums have weighed in on the show, and they seem to verify that "UnREAL" is a lot what being on the show is like: Here, producers mingle through the cocktail parties dressed as waiters, manipulating the contestants’ actions, while hidden cameras in the house show contestants in their darkest moments, like making themselves sick and engaging in illicit sexual rendezvous. When protagonist Rachel, in the throes of a breakdown, wakes up in a trailer on set where she has spent the night sleeping, it is the most damning image of the show’s great illusion — how thin the line is between carriage and pumpkin.

2. The infuriating treatment of race

Much has been made of the “Bachelor” franchise’s overwhelming whiteness, and “UnREAL’s” treatment of race is the closest the show gets to outright satire. When a contestant called Shamiqua is the first one to meet suitor Adam, the showrunner balks, because the first woman ought to be “wife material” and the audience simply won’t go for a black contestant in that role. As she puts it, “It is not my fault that America's racist.” Later, the show's two black contestants are asked to play up the "angry black woman" stereotype, and the woman who refuses gets sent home -- because America, right!? It’s a fascinating dissection of the underlying racial biases that inform the entertainment we watch and create — not to mention, considering this show's mostly white cast, being more than a touch meta.

The ingrained misogyny of reality dating shows is a topic of much cultural discussion, and it also forms a central core of “UnREAL.” When we first meet Rachel, her t-shirt reads “This is What a Feminist Looks Like.” Yet her job is to tear down the show’s female contestants: to find their weak spots and get them to crumble on camera, and to exploit their sexual histories for the show’s gain. Like "The Bachelor", "Everlasting" veers schizophrenically between virgin-shaming and slut-bashing, as one woman is asked to play up her virginity while another is told off for getting hot and heavy too early, in what seems to prefigure the horrible shamefest that "Bachelorette" Kaitlyn may have coming her way this season (and that Andi Dorfman and countless other women on the show have faced). In a way, then, Rachel acts as a surrogate for feminist "Bachelor" viewers -- who, yes, do exist — willingly shoving their morals aside both to participate in the show’s heteronormative fantasy and to revel in its schadenfreude. There are a few men on “UnREAL” (douchey show creator Chet, the dull suitor Adam), but the show is squarely focused on the women who make it and participate in it. Why does Rachel still agree to play the game, and what is she getting out of it?

5. The exploitation of personal trauma

Anyone watches “The Bachelor” knows that the show revels in exploiting past tragedy, as the contestants are forced to unleash sob stories about dead spouses and traumatic upbringings throughout the season for dramatic effect. In the “UnREAL” pilot, Rachel is directed to manipulate a victim of spousal abuse, and then later to exploit the instability of a contestant who spent time in a psych ward. She does so by winning their trust and then emotionally manipulating them. But this exploitative behavior is not without consequence — Rachel seems completely spent and joyless throughout, as we see the human toll of these interactions exact. Indeed, Rachel herself is under the microscope, much like the show’s contestants; as the show's creator snaps at her, ”You’re not hot enough to be crazy, so I need you to keep your brains together, okay?" Perhaps, in a way, that's why shows like the "Bachelor" can be such compelling cultural artifacts; Because the scrutiny faced by the female contestants isn't all that unlike the scrutiny women face in their everyday lives.