Hillary needs to win by billions of percentage points if she wants to look Strong, the media declares 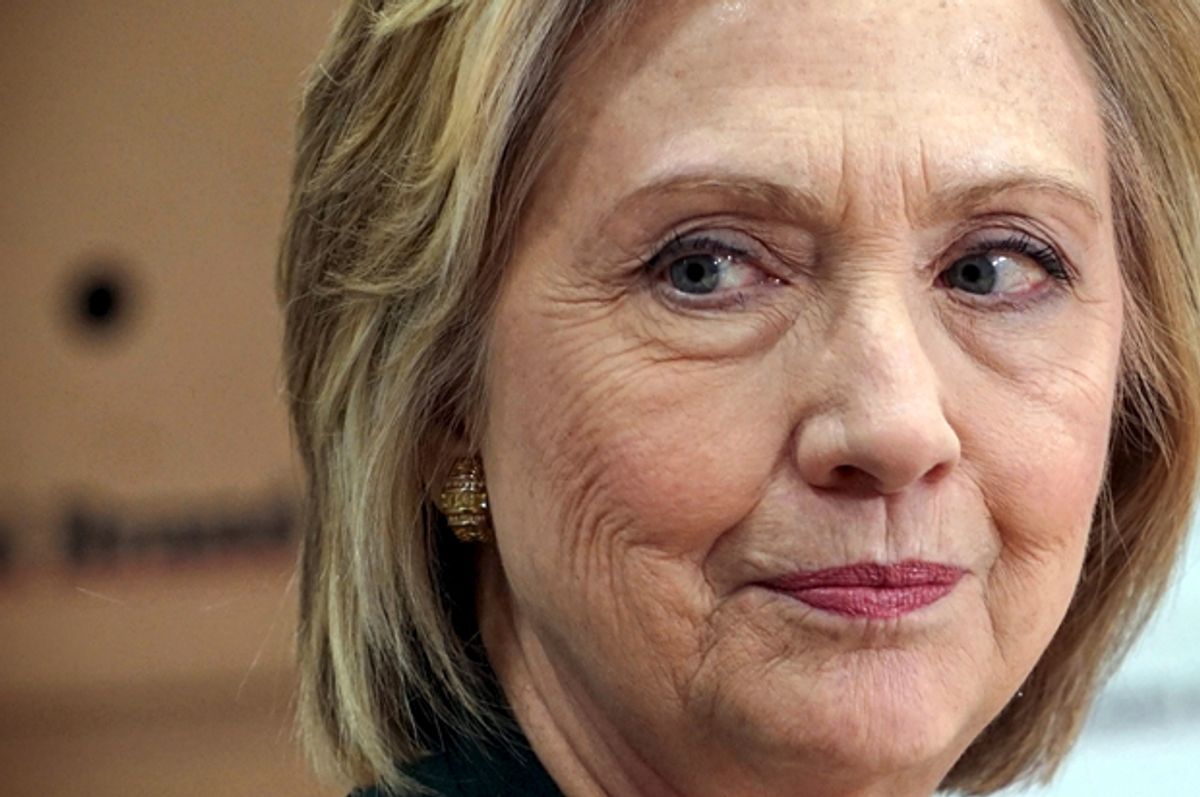 The news also caused a stir because its messenger from within the campaign -- communications guy Jesse Ferguson -- requested that relatively plain vanilla logistical information be reported "on background" as originating from a "Clinton campaign official." The Clinton campaign requests anonymity for the transmission of even the most basic logistical information, talking points, and biographical basics. Why? Here's a sampling of some of the explosive material Ferguson passed on to reporters yesterday:

• Her speech will lay out her view of the challenges facing this country and her vision and ideas for moving the country forward.

• Hillary Clinton grew up in Illinois, and her career spent working on behalf of children and families has taken her from Massachusetts to Washington, D.C., Arkansas to New York. But it was the voters of New York who elected her to serve as their first female senator.

• Throughout her career, Hillary Clinton has been inspired by FDR’s belief that America is stronger when we summon the work and talents of all Americans and has long admired Eleanor Roosevelt as a role model.

Illinois? Arkansas? SENATOR FROM NEW YORK? God forbid any individual staffer's fingerprints be on this dumping of fairly well-known information from Wikipedia.

The email did throw in a couple other bits of information, however, that came completely out of the blue:

• In Iowa, no Democratic candidate for president has ever received more than 50% of the caucus vote unless they were a sitting President or Vice-President, or incumbent Iowa Senator.

• In New Hampshire, no Democrat in a contested primary in the last 25 years has won by more than 27,000 votes or received more than 50% of the vote. Even running unopposed in 2012 as the incumbent president, President Obama received around 80% of the primary vote.

As the New York Times' Adam Nagourney pointed out on Twitter, the Clinton campaign is already working hard to manage expectations. It was Nagourney's own paper this weekend, after all, that published a piece about how Bernie Sanders' campaign was gaining "momentum" in Iowa. Indeed, Sanders is drawing extremely large crowds at his events in the first caucus state, and his poll figures there are moving nicely into the mid-teens. Is Hillary Clinton doomed? Will the angry corn people throw lots of corn at her, as they do?

“Objects in your rearview mirror are closer than they appear,” Mr. Meyer said he had told Mr. Price about Mr. Sanders. “Mrs. Clinton had better get out here.”

Don't worry, Kurt, she's coming soon! And she'll be sure to kiss up to you and shower your organization with money just as Bernie Sanders and Martin O'Malley already are.

In any event, this is Hillary's team setting the early bar: don't expect her to break 50 percent. You may be wondering why the campaign thinks it's so vital to set this number so early, before she's even had her big kickoff event. It's almost as if her campaign feels that, even if she wins every state with 40 or 45 percent of the vote, the media will still pursue a narrative about how she's a FAILURE who will LOSE to RUBIO or TRUMP if she doesn't win nine million percent of the primary vote in every state.

Her campaign would be correct!

Consider this passage from that same NYT report about Bernie Sanders' crowds in Iowa (emphasis mine):

The first-in-the-nation caucuses, on Feb. 1, loom as a major test for Mrs. Clinton: She came in third in Iowa during her presidential run in 2008, and anything less than a decisive victory this time would rattle her shell of inevitability and raise questions about her strengths as a standard-bearer for an increasingly liberal Democratic Party.

Zuh? Here's what will happen if Hillary Clinton wins the Iowa caucuses by less than 20 percent (where Kurt Meyer sets the bar for "decisiveness"): she will have won the Iowa caucuses. And then there will be a bunch of other states that Hillary Clinton is likely to win, too, by some margin. In the end, if she has a majority of delegates and super delegates -- and my oh my will she ever have a lot of super delegates -- she will be the Democratic presidential nominee and go on to face George Pataki, Jim Gilmore, or whichever lesser Republican emerges from that hilarious melee. If Hillary Clinton wraps up the nomination gradually instead of immediately then she will have still won the nomination.

But that's not a very fun look at the future, is it? Let's up the ante and say that if Hillary Clinton loses one single vote in Iowa, then she's a failure who will need to drop out.