The lifestyle guru takes a stand on "bodyshaming," but her new emphasis on health seems a bit shaky overall 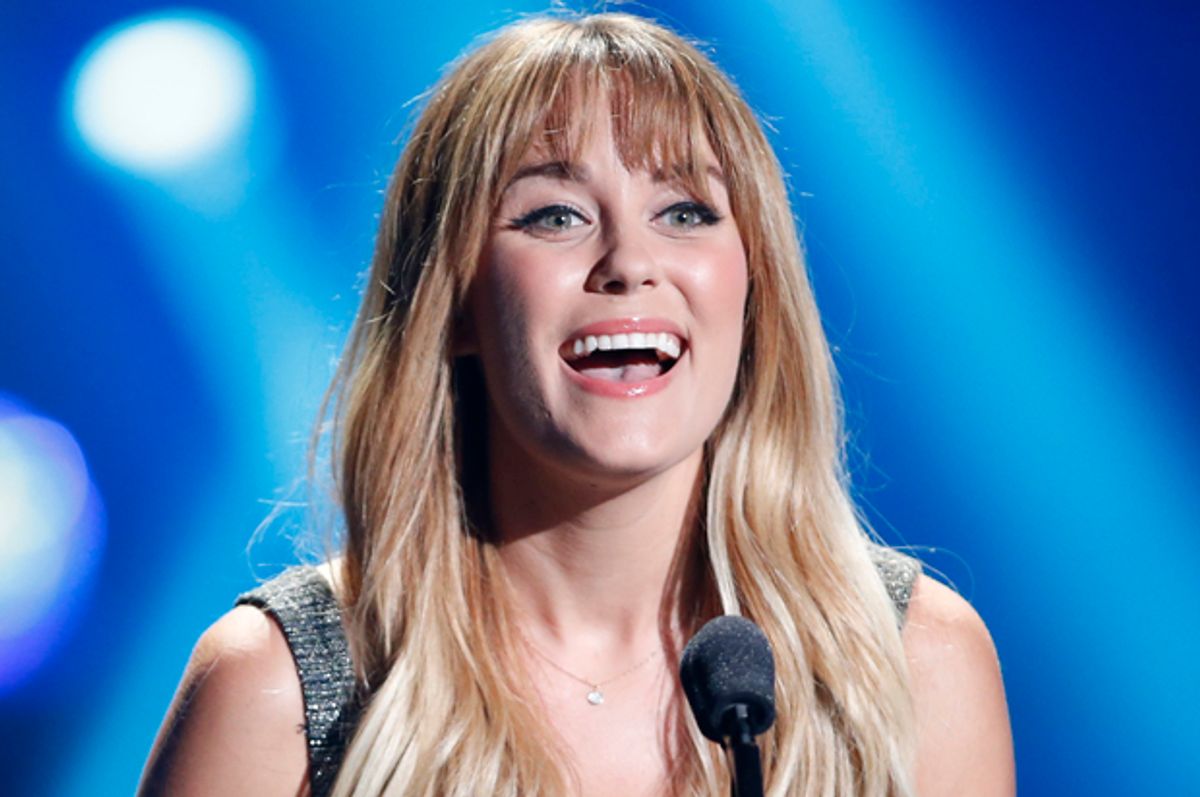 You're not going to change all the dysfunction in the world by refusing to use certain words. But it's not a terrible start.

On Monday, Lauren Conrad, the 29 year-old reality star and Heidi Montag feuder turned lifestyle entrepreneur and occasional book destroyer announced on her site's blog that "When we’ve talked about getting in shape in the past, words like 'skinny,' 'slim,' and 'thin' have often come up. Starting this month, we’ll be banning any body shaming terms from the site, and replacing them with words like 'fit' 'toned,' and 'healthy.'" Henceforth, Conrad says, "skinny" is just for jeans.

She explains, "Every body is created differently — and healthy bodies come in all shapes and sizes." Cosmopolitan quickly cheered the change, saying "We love that LC is using this social media platform to encourage positive attitudes." The pants from Conrad's clothing line, Paper Crown, by the way, appear to currently only go up to size 8.

Of course, few people would consider "slim" or "thin" to be body-shaming, and let's be honest, even "skinny" is often not taken as a terrible thing to be called. It's more like, "You look so skinny! Good for you!" Conversely, mainstream magazines and style sections rarely deploy loaded words like "fat" and "chubby" any more to describe even the very obese, because the terms are widely considered disparaging. It doesn't stop the pervasive cult of thought that there's nothing worse to be than, as a Lilly Pulitzer employee recently posted in her work space, "fat, white and hideous."

The horrendous scrutiny of social media — and the wildly unrealistic images out there — offer too many opportunities to warp the notion of what "healthy" looks like. In April, YouTube fitness star Cassey Ho proved the point when she shared a heavily Photoshopped picture of herself with the caption "Finally got my perfect body" — along with comments that "On the very same photo, got some people praising me and others degrading me."

Other sites have already taken a hard look at what their responsibilities are. Three years ago, Tumblr began removing "blogs about self-harm, anorexia or bulimia." Instagram has similar anti "self-harm" guidelines, removing hashtags like "thinspiration" and warning, "We believe that communication regarding these behaviors in order to create awareness, come together for support and to facilitate recovery is important, but that Instagram is not the place for active promotion or glorification of self-harm."

And though Pinterest still permits thinspiration-centric hashtags that will lead you to some intensely disturbing images and messages, a search for them will also reveal the message at the top of the page that "Eating disorders are not lifestyle choices, they are mental disorders that if left untreated can cause serious health problems or could even be life-threatening," and a referral to the National Eating Disorders Association Helpline.

I'm all for health and fitness and promoting it for individuals of all sizes and abilities, and I'm glad when women like Conrad, with her influential platform, are trying to shift the focus away from the smaller is better paradigm. That takes consistency and effort and more than just an easy list of forbidden words. I hope Conrad's promise is the start of something bigger. On Tuesday, meanwhile, the site a posted Bikini Yoga Workout that promises to "have you on your way to a beach ready body in no time."