SCOTUS "does not have the final word" on gay marriage, says Santorum, who is perhaps unfamiliar with history? 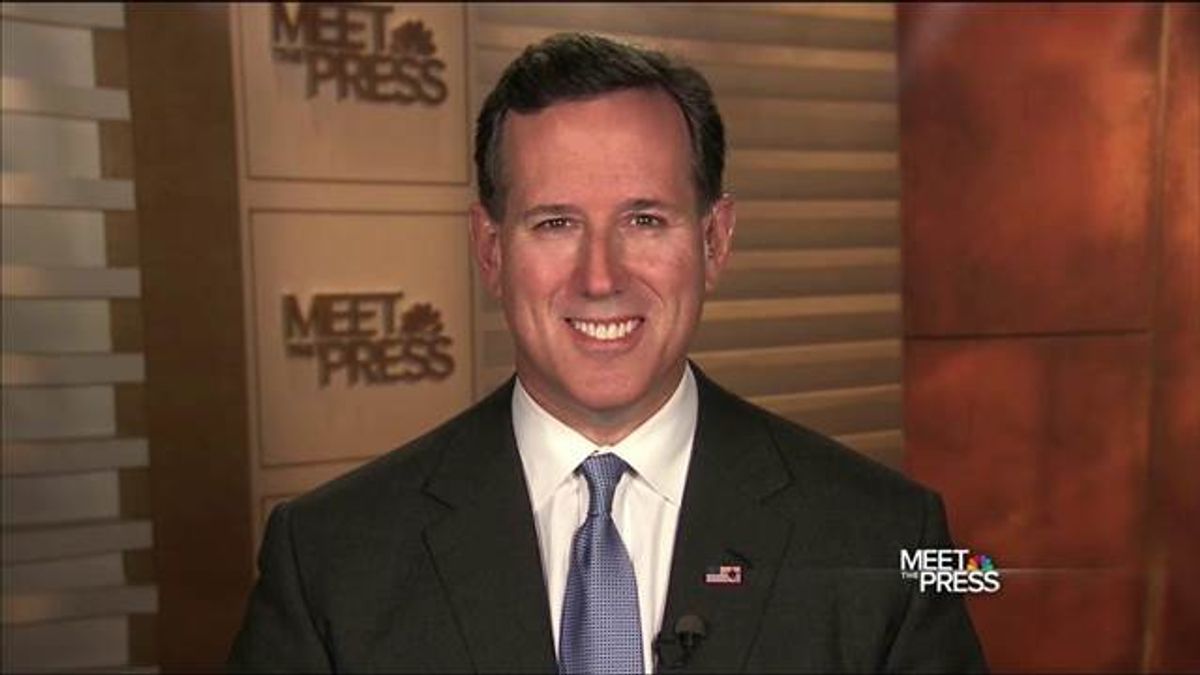 We're not even a week into Rick Santorum's presidential campaign and already the former Pennsylvania senator has aligned with Mike Huckabee and Dr. Ben Carson on their intellectually violent interpretation of the Supreme Court's judicial review powers as they relate to same-sex marriage. Appearing on Sunday's "Meet the Press," Santorum responded to a questions about the forthcoming same-sex marriage decision in Obergefell v Hodges by suggesting that, as president, he'd exercise his alleged power to "push back" against the Supreme Court.

"It’s important to understand the Supreme Court does not have the final word. If the court decides this case in error, I will continue to fight for this as I have for life… We’re not bound by what nine people say in perpetuity."

Santorum continued by likening this would-be fight against the Court's possible striking down of same-sex marriage bans to the conservative fight against abortion rights during the last 40 years post-Roe v Wade.

This admission points to a backdoor strategy in its nascent stages in some circles of the paleoconservative ranks of the GOP. We'll come back to this, but you might recall how, previously, Mike Huckabee said that president can basically ignore Court rulings he or she disagrees with: "The notion that the Supreme Court comes up with a ruling and that automatically subjects the two other branches to following it defies everything there is to equal branches of government," he said last week. Ben Carson, meanwhile, blasted "judicial law," without really explaining how there's no such thing, especially with regards to the current same-sex marriage issue in which the courts are merely overturning unconstitutional bans on marriage equality.

Other than in a few very rare and extreme circumstances (during the American Civil War, for example), there's simply no legitimate precedent for the chief executive to simply ignoring a Supreme Court ruling he happens to have disliked. There's certainly no previous examples of presidential candidates characterizing judicial review as "judicial law," whatever that means.

Going forward, it's obvious that the anti-LGBT Republican strategy will be to make it really, really difficult for same-sex couples to get married. First there was a flood of "religious freedom restoration acts" (RFRAs), allowing businesses to flagrantly discriminate against same-sex couples based on murky religious dogma. In addition to the RFRAs, Republican state legislators in Arkansas, along with Gov. Asa Hutchinson, R-Ark., passed a law making it illegal for local governments to pass anti-discrimination laws. Now, we're hearing about the ludicrous notion of ignoring judges and courts at the federal or state level.

These radical end-arounds should sound familiar, and it's appropriate that Santorum invoked the abortion issue because the strategy on same-sex marriage appears to be similar to the anti-choice crusade, among others. Lacking the ability to reverse Roe v Wade after so many years, the far-right has instead passed laws that circumvent Roe and instead make it extraordinarily difficult to have a (totally legal) abortion, going so far as to define what is or isn't "legitimate rape."

This brand of backdoor oppression isn't new. Rewinding 130 years or so to the post-Reconstruction era, we see other examples of how it successfully operated. With slavery banned and African-Americans (the men, at least) granted full citizenship rights and the right to vote through the 13th, 14th and 15th amendments, there was no real avenue for conservative white supremacists to reverse the tide, so instead the age of "black codes" and Jim Crow began.

Across the South, horrendously sinister laws were passed against, for example, the trivial non-crime of "vagrancy," allowing law enforcement to arrest and incarcerate African-Americans for being unemployed or incapable of proving employment. In many cases, these men were sold to the owners of semi-secretive mining operations or plantations as, essentially, slaves to serve without pay -- in many cases, permanently disappeared from society. But since these were convicted criminals, slavery wasn’t “slavery,” it was justified as legal punishment for a ridiculous non-crime handed down by a kangaroo court. Other laws, such as literacy tests, poll taxes, segregation and anti-miscegenation statutes followed, and not just in southern states, by the way. (For further reading, see Douglas Blackmon's groundbreaking work, "Slavery By Another Name.")

If anti-choice zealots are allowed to operate unchecked, how long will it be before women are incarcerated for murder because they had an abortion? With "fetal personhood" laws, it's just a matter of time. In fact, it's already more or less happened in the case of Purvi Patel, who was sentenced to 20 years for "feticide" following a miscarriage. There's no indication that law enforcement ramifications will be attached to various anti-LGBT laws -- but Santorum, by the way, has previously spoken out in support of re-criminalizing sodomy. If it's within the realm of possibility to pass laws requiring women seeking abortion services to undergo transvaginal ultrasounds, anything is possible with this crowd.

Additionally, and not insignificantly, we've watched in shocked horror as Republicans across too many red states pass archaic, Jim Crow style Voter ID laws -- each of which make it really, really difficult for low income or elderly voters to exercise their voting rights. In Texas, for instance, voters are now required to have a state-issued ID, but 70 counties in Texas lack offices where the IDs are issued, and they have to be issued in person. In Mississippi, a relatively new Voter ID law requires that a birth certificate be presented in order to get a photo ID, which is required to cast a ballot, but a photo ID is necessary in order to attain a copy of a birth certificate. All of this in order to thwart the 0.00002 percent chance of voter fraud.

Whether it's anti-choice legislation, anti-LGBT laws or literally Jim Crow-style Voter ID laws, Republicans at every level of government will stop at nothing to hold back the advancement of equality and civil rights. Civil rights and LGBT activists would do well to hunker down in preparation for similar strategies to be employed against marriage equality. Using any means necessary, the GOP is all too willing to sign onto the wrong side of history for a few extra votes from citizens who, in a perfect world, ought to be ignored and marginalized.