Walmart is a cultural sickness: How the American workplace is enriching the wealthy — and destroying everyone else

American workers are conditioned to expect less and less even as they do more and more. And it's killing them. 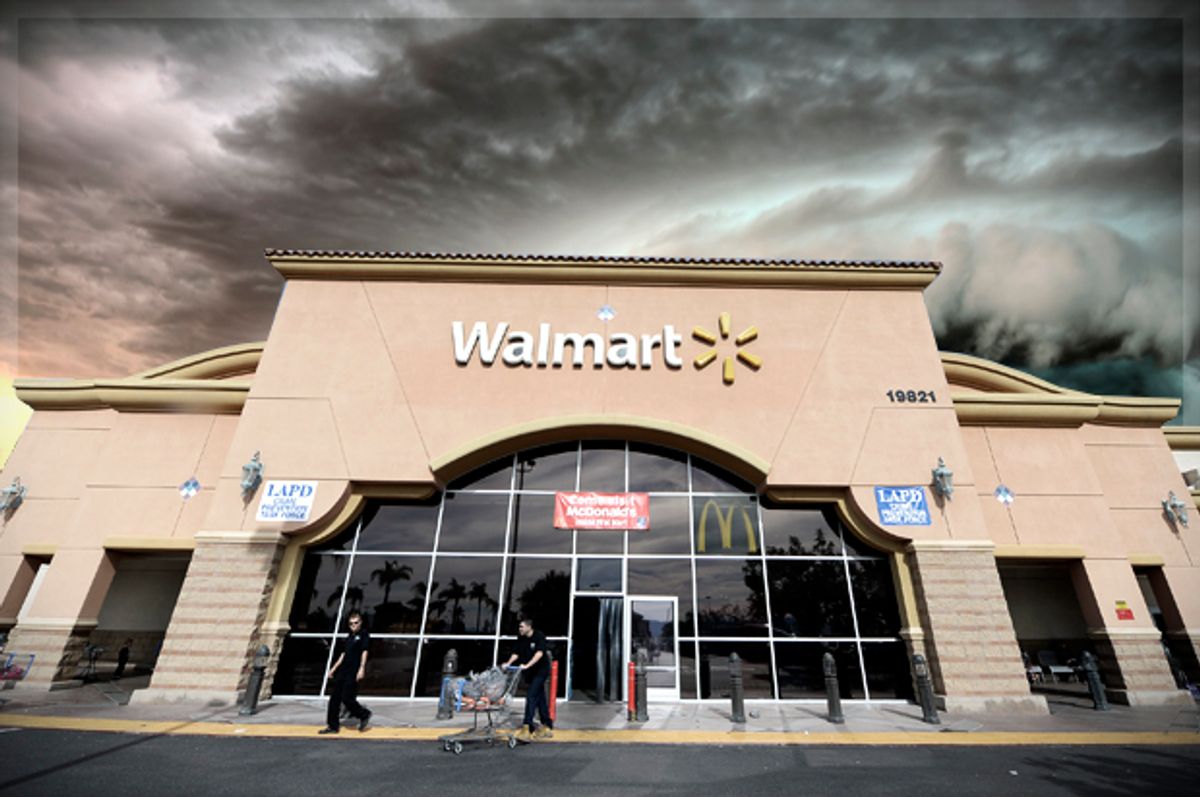 At a time when so many Americans are struggling just to earn a decent living and find adequate employment, it may seem counterintuitive to indict the work people are doing as one of the biggest problems facing the country. But when you take a look at what our work is turning us into and what it's actually accomplishing, it becomes clear that our priorities are all out of whack.

In his 2015 State of the Union address, President Obama spoke about important labor issues like unequal wages for women and a lack of paid sick and maternity leave. He called on Congress to pass legislation raising the minimum wage and requiring employers to guarantee at least seven days of sick time a year to their employees. He had to do this because, remarkably, nearly 40 percent of the American workers have no sick time at all, nor is there any requirement for their employers to provide any – a regressive distinction the United States shares with only two other countries, Papua New Guinea and Oman.

Hopefully these important issues will be brought to light as the 2016 presidential race heats up, especially with Bernie Sanders running. The anti-family nature of U.S. labor law should make it a logical target for any values-oriented crusader; but predictably, Republican politicians oppose reform. While hiding behind a defense of small businesses, the Republican agenda is really a handout to mega corporations.

Walmart, for instance, has been exposed for its discrimination against pregnant women, forcing them onto unpaid leave or firing them outright if they become unable to perform certain duties. In April 2014, activists and employees forced the company to modify its policy, allowing for a “reasonable accommodation” to be made for women with “a temporary disability caused by pregnancy.” This weak and ambiguous concession leaves women with healthy pregnancies in the lurch, even though they still may require modified job duties.

Congress could intervene and establish better protections for pregnant women, but it doesn't. The 1978 Pregnancy Discrimination Act – the last such act passed on the federal level – is so feeble that a Walmart spokesperson in 2014 could truthfully say, “We’re proud of our new policy. It is best in class and goes well beyond federal and most state laws.” That reveals at least as much about federal and state laws as it does Walmart. The Waltons are among the wealthiest people on the globe, yet their business won’t guarantee American workers the fundamental dignity of having a child without fear of repercussion. And so it goes with workers' rights across sectors of the economy.

In any moral society, this would be considered a crime. And in more advanced societies, Walmart is forced to grant their workers more rights, like unionization. Here, we’re dominated by politicians who argue the only crime would be if the state got involved at all.

Republicans scoff at emulation of the European model – which affords generous holiday, sick and paternal leave to workers – by pointing to Europe’s own unemployment epidemic and the fact that the American economy is recovering with almost all of its capitalist dogmas intact. Of course, what’s often left unsaid is that our rebound is being enjoyed overwhelmingly by only the wealthiest few. What value is a roaring economy to ordinary Americans who are overworked, overstressed, unable to spend time with their families, and not even reaping the financial benefits for their hardship?

Even office and white-collar workers, while generally receiving far greater benefits than low-wage retail and fast food workers, are woefully deprived when it comes to making room for their personal lives. Their hours are less rigidly documented and they are usually salaried, meaning they are more likely to be called on for unpaid overtime. They spend virtually their entire day in plywood boxes, a mentally stultifying way to invest one’s time. As more and more Americans live the sedentary, “professional” lifestyle, the disastrous health consequences of sitting around all day are becoming apparent.

There’s also a compelling argument, articulated brilliantly in a 2013 essay by author and activist David Graeber, that many white-collar and service sector jobs have no justifiable reason to exist. Says Graeber: "It’s as if someone were out there making up pointless jobs just for the sake of keeping us all working." Professionals spend their days bounding from meeting to meeting and forwarding spreadsheets from one department to another. Customer service does little more than obfuscate information and bear the brunt of consumer rage. All this goes on with virtually no time off or flexibility, despite the economic and personally refreshing benefits of people controlling their own schedules. Working Americans passively accept that this is just life, but total conformity to the demands of a meaningless day job exacts a toll on their psyche and wastes the time and energy of skilled people who could otherwise be doing important work. These are not minor quibbles to be brushed aside with folksy idioms like "Nobody likes their job" and "That's why they call it work"; this is a crippling cultural sickness.

America is often heralded as a "great experiment,” but policy planners are at best unimaginative and at worst fiercely hostile when it comes to social experimentation. Nowhere is this more finely exemplified than in our work culture. You can make close to $100,000 in your first year working on Wall Street, but cap out around that much after a lifetime in social work. Say what you will about capitalism – it’s not a system that rewards work based on its social value. Our fixation on profit drives Americans into the “bullshit jobs” sector of the economy, leaving important work like fixing our crumbling infrastructure undone. A society that was truly full of big, bold ideas would not allow a fear of resembling socialism to prevent it from more meaningful planning.

Lots of Americans can’t find work at all. Many of those who can work put in too many hours for too little reward. While our jobs erode our home lives and personal health, politicians defend abstract ideals of capitalism over the needs of real human beings. Pointless, even destructive work pays a great deal more than work that benefits society. To praise this as the greatest model in the world is about as delusional as anything the North Koreans believe.

But there is a way to beat it. The super wealthy have engineered a system that works wonders for them and they aren’t going to let it go without a fight. If we ever want to have a system that works for the people, the people are going to have to build it. American workers and consumers must strike, protest, stand up for their rights as human beings and strengthen their local communities. We need to radicalize our economy – decide as a society the kind of work we really value and reward it accordingly. And we could all spend a lot more time creating, loving, sharing and relaxing.