A nude cruise brought us closer

My wife has long been up for anything, but this seemed off the table. So what made her change her mind? 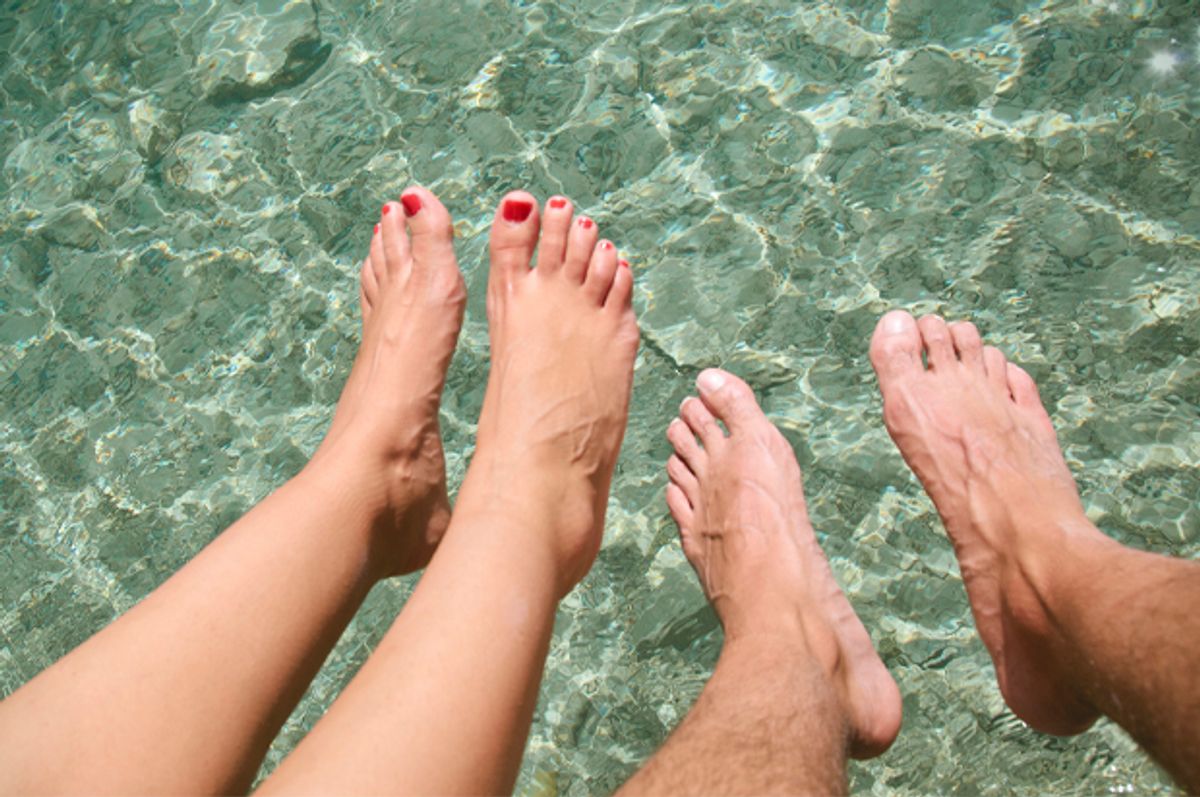 Even though she has worked in publishing for her entire adult life, I don’t think my wife really knew what she was getting into when she agreed to marry me.  She’d been a publicist, she’d listened to writers confess their fears, rejoice at hitting the bestseller list, complain about room service in their hotel, and bloviate about slights real and imagined.  Now she was married to a writer; one not necessarily prone to whining, but one who, like all writers, does have bloviant tendencies.

At our wedding we did a quick revision of our marriage vows: out went the traditional “honor and obey,” and in went “I promise to show you a good time.” We were looking for more than a partner, we wanted to be co-adventurers.

And that was just the beginning.

She was right there with me when I was doing research on a novel, drinking beer with a group of undercover narcotics detectives in the divey-est dive bar tucked in a decrepit alley of Honolulu’s Chinatown. I can’t say it was the most romantic getaway ever -- it looks more like the kind of place sensible people avoid -- but she walked in like she was a regular.  She even sang some karaoke, sandwiched between two giant Hawaiians, belting out a Stones tune. When the bartender brought out a two-gallon glass bucket of cheap saké with the fang-bearing corpse of a venomous Okinawan pit viper in the bottom and asked if I’d like a shot, she didn’t bat an eye, making the decision for me by saying, “I’ll drive.”

When I wrote a book about the best marijuana in the world, she was right by my side at the Cannabis Cup in Amsterdam, chuckling good-naturedly as I tried to roll a joint, carefully guiding me away from the stroopwafels after I’d smoked too much.   She didn’t seem to suffer from any of my foolishness; if anything, she offered moral support, a kind of backup plan in case I figuratively or literally fell on my face.  We had a mutual trust that I had never experienced in a relationship before.  Although the four 7-foot tall marijuana plants growing in the driveway gave her pause, she realized it was research.  (And I had a doctor’s recommendation that made it quasi-legal.)

She weathered the more mundane aspects of being married to a writer -- tedious events at bookstores, arcane discussions of pop culture minutiae, excessive white wine consumption, sometimes simultaneously -- with a smile.

We often found ourselves in strange predicaments.  Some people might panic if they found themselves stranded on a west Texas highway due to a freak ice storm, but we shared dinner at an offramp Chili’s with a truck driver named Bob and celebrated Christmas in a Motel 6.  Stranded in the Madrid airport for seven hours, while our fellow travelers turn apoplectic with rage or slumped into their seats and wept, we made it a point to try the tortilla española in every terminal.  I recognize that these are small inconveniences in the grand scheme of things, but it’s in the small moments where I appreciate her ability to roll with a situation, to turn adversity into adventure, to show me a good time.

And then one day she balked.

I was planning to do some research on the world of nudist resorts and the majority of these resorts have a couples-only policy.  It’s a rule I understand; no one wants to go on a clothing-optional vacation and find themselves at a sausage party.   And, as the reservationist at a nudist resort in Palm Springs told me, “It makes the ladies more comfortable if everyone’s married.”

I tried reasoning with my wife.  “It’s important for the book.”

She shook her head. “No.”  She might’ve used salty language.

She was unmoved.  Public nudity, even in the relative safety of an enclosed resort, was a line too far.

Not that she cared if I went.  She might not be there to show me a good time, but she wasn’t going to deny me my research.  So I proceeded to visit nudist cities in France and Spain, and to “free hike” -- what nudists call naked hiking -- the Austrian Alps with a cadre of European naturists.

But when it came time to go on an all-nude cruise around the Caribbean on a fancy ocean liner, I did my best to be persuasive.  There were obvious enticements: Neither of us had ever been on a cruise ship before, we’d never visited Jamaica or the Cayman Islands, and I’d already paid for a double-occupancy stateroom.  The downside was that there would be naked people on the ship, thousands of them.  Not that she would have to be naked. It wasn’t mandatory. I reminded her that she could hang out in the stateroom, keep her clothes on, order room service, and read a book.

She still wasn’t convinced. I showed her pictures of the ship. Read her a description of the unique public library on Grand Cayman. Discussed the vegetarian menu available on the cruise. I bought her a couple of sarongs and she agreed to come along, if only to see me naked with a bunch of naked people. That idea seemed to really amuse her.

Once at sea, and once she got over the shock of seeing so much uncovered flesh on parade, she began to relax. She even took a few tentative sorties around the ship without clothes figuring that if she went on the nude cruise and didn’t at least try being nude then she was letting herself down. Incrementally, she became acclimated to the “anti-textile” lifestyle, helping me strike up conversations with couples who would’ve been put off by an inquisitive single man, and by the end of the cruise she’d become comfortable enough to participate in a nude 5K around the deck of the ship to raise money for breast cancer research.

I was sitting on the promenade deck, making notes in my Moleskine, watching my naked wife have a conversation with another naked couple (they were from Texas), and I thought:  My wife is game. As in spirited, spunky, courageous and up for anything. And I realized how lucky I was that she is. Because I am not sure I could venture as far as I do in my various explorations without her understanding and support and companionship.  I wouldn’t be the writer I am, or the person I am, without her.

We didn’t have to be naked on the balcony of our stateroom at night, drinking wine and watching the coast of Cuba in the distance, but we were. We were sharing the experience. The challenge of a nude cruise, overcoming our personal fears, had brought us even closer. And while I can’t say that we became nudists -- we did not become nudists -- we continue to do what we promised when we got married.  To show each other a good time.

Mark Haskell Smith's latest book is "Naked at Lunch: A Reluctant Nudist's Adventures in the Clothing-Optional World." He is the author of five novels, Moist, Delicious, Salty, Baked, and Raw: A Love Story. He has also written the non-fiction book Heart of Dankness: Underground Botanists, Outlaw Farmers, and the Race for the Cannabis Cup.