The rightwing hate-monger is peddling a new book of anti-immigration invective. Her arguments look *very* familiar 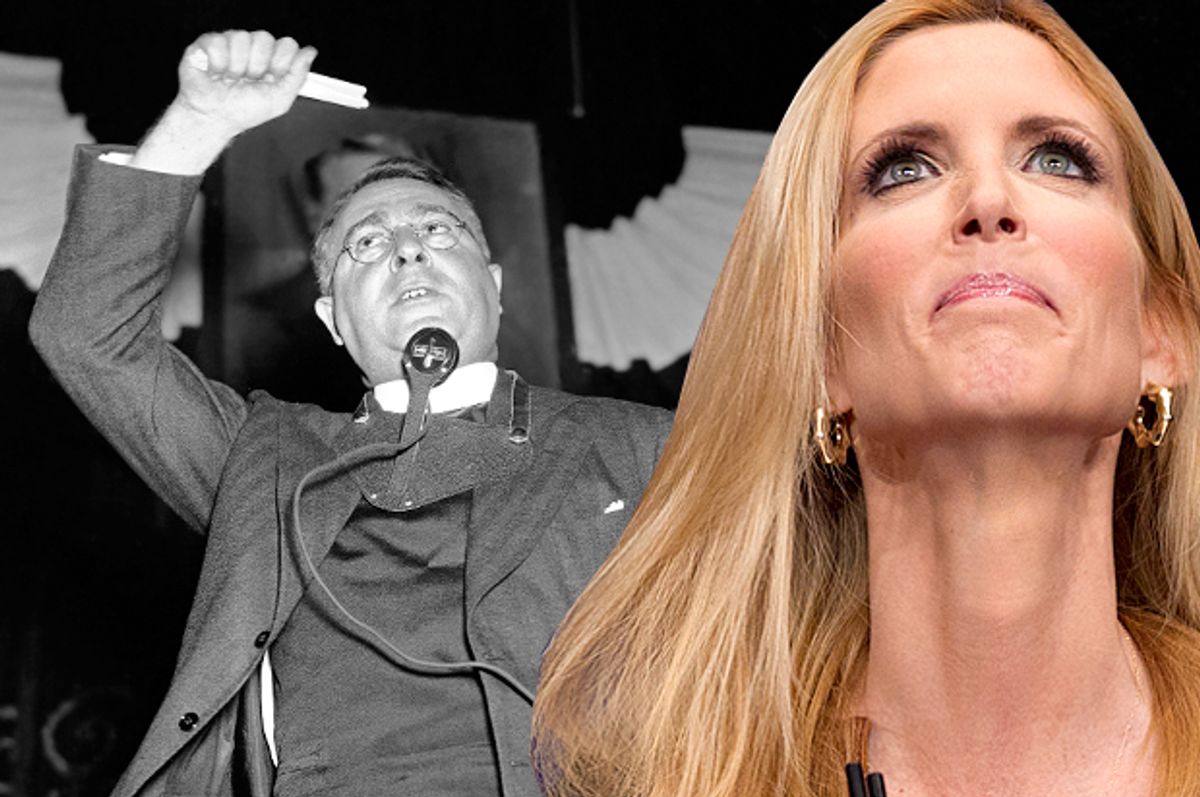 As reported here on Tuesday, Ann Coulter is on the anti-immigrant warpath once again, appearing on Fox New’s “Hannity” program to promote her new book, “Adios, America.” Coulter’s position on immigration has evolved into an equal opportunity nativist hatred, she told Sean Hannity, from merely anti-Mexican racism to an elaborate ideology which founds American decline on all immigrants.

Just a couple days before, Coulter was joined by former congresswoman and presidential candidate Michelle Bachmann and godmother of anti-feminism Phyllis Schlafly to flesh out this theory for World Net Daily. The three influential conservative women were asked to respond to a landmark finding by Gallup, whose most recent poll showed that for the first time, Americans who identify as socially liberal have caught up with self-identified conservatives.

All three were in agreement with Coulter’s new theory: It’s not that Americans’ minds are changing; it’s that un-American “foreigners” (which the rest of us call naturalized citizens) have been allowed to come -- and stay! -- here with their radical takes on traditional values. Replacing Coulter and company’s anti-Mexican immigrant tack of the last decade or so is an across-the-board condemnation of immigration as a permissible phenomenon.

But it’s not Swedes or the French (i.e., foreigners with views typically to the left of Americans) that worry the three women. It’s immigrants from “Third-World nations” that are the problem, says Bachmann. The trio isn’t content with their already problematic proposition, and poverty gets stirred in, as though poverty is any kind of reliable companion to the possession of liberal social values. With only an obligatory mention of Europeans, the article names “Hispanics, Asians and Muslims” as the poor immigrants without American-like traditional values of patriarchy and homophobia.

“Stop all immigration now,” says Coulter -- even for asylum-seekers. “One of the biggest rackets in immigration is those admitted as refugees,” she says, using the Boston bombers as a bogeyman to paint all refugees as potential terrorists. And not only will they eventually bomb sporting events, these refugees, but they’re expensive to take care of before they figure out C-4. The Tsarnaevs “were welcomed as refugees from persecution and given $100,000 in welfare handouts,” Coulter complains.

These poor people “dilute our standards, our values, our constitutional system and our pro-American population,” worries Schlafly, building on language that by the end of the article unsettles a reader acquainted with nativist nationalists like the Depression-era demagogue Father Coughlin.

Charles Coughlin was a radio personality whose soaring popularity during the 1930s makes Rush Limbaugh look, by contrast, like a ham-radio enthusiast. Coughlin entertained as many as 30-million listeners every week with his anti-Semitic broadcasts, using language and logic alarmingly similar to that of Coulter and her crew.

For example, in the weeks after the Kristallnacht in Germany in 1938, Coughlin delivered a series of sermons on how the Jews might have invited hatred onto themselves. For Coughlin, Communism was the cultural infection that Jews were responsible for. And, not even two weeks after the Kristallnacht, Coughlin took to the airwaves to consider why Germans might reasonably believe that Jews “were responsible for the economic and social ills suffered by the Fatherland.”

The series of homily broadcasts can be read in a book compiled by Coughlin, “Am I an Anti-Semite?” Those expecting 150 pages of the word “Yes” will be disappointed, as Coughlin instead performs some early versions of scientific racism. Like Coulter and company, Coughlin’s got facts: “In a spirit of mutual cooperation; in a scientific spirit of coldly facing causes in order to remove effects, let us pause to inquire why Naziism is so hostile to Jewry…” (Yikes.)

He continues in the same vein of learned hatred: “Speaking as a student of history, I am endeavoring to analyze the reason for the growth of the idea in the minds of the Nazi Party that Communism and Judaism are too closely interwoven for the national health of Germany,” he offered. He proceeds to detail how Communism is a global Jewish conspiracy, explaining that the Soviet upper ranks were full of Jews. In the contradictory world of virulent racism, global Jewry can sit atop both capitalism (they run the banks, say anti-Semites) and communism.

After a backlash among prominent rabbis, American Jews and the era’s rare Gentile allies, Coughlin made a clarification that sounds familiar to contemporary readers of people like Coulter and Schlafly: “Not Anti-Semitism but Anti-Communism,” was the name of his December 4, 1938 broadcast, which he offered as a response to the criticism. It’s not that I support the persecution of German Jews, went Coughlin’s proto-dog-whistle presentation, in a nutshell. It’s just that they’re virtually all communists, and communists are the enemies of everything good, so you do the math.

How different is Coulter’s new book, with the title “Adios, America! The Left’s Plan to Turn Our Country into a Third World Hellhole”? People from other nations aren’t innately subhuman or evil, it’s just that they’re all “leftists” and they’ll destroy the country.

But Coulter, Bachmann and Schlafly aren’t entirely wrong. There are new voters that are changing the social complexion of the country: Those who immigrated from the womb 18-to-34 years ago or so don’t, and won’t, ever share the trio’s retrograde politics. And those who do share their social conservatism are busy emigrating to the ethnically pure nation in the sky.