In a carnival of self-righteousness, Michelle and Jim Bob absolve their son and blame their woes on their enemies 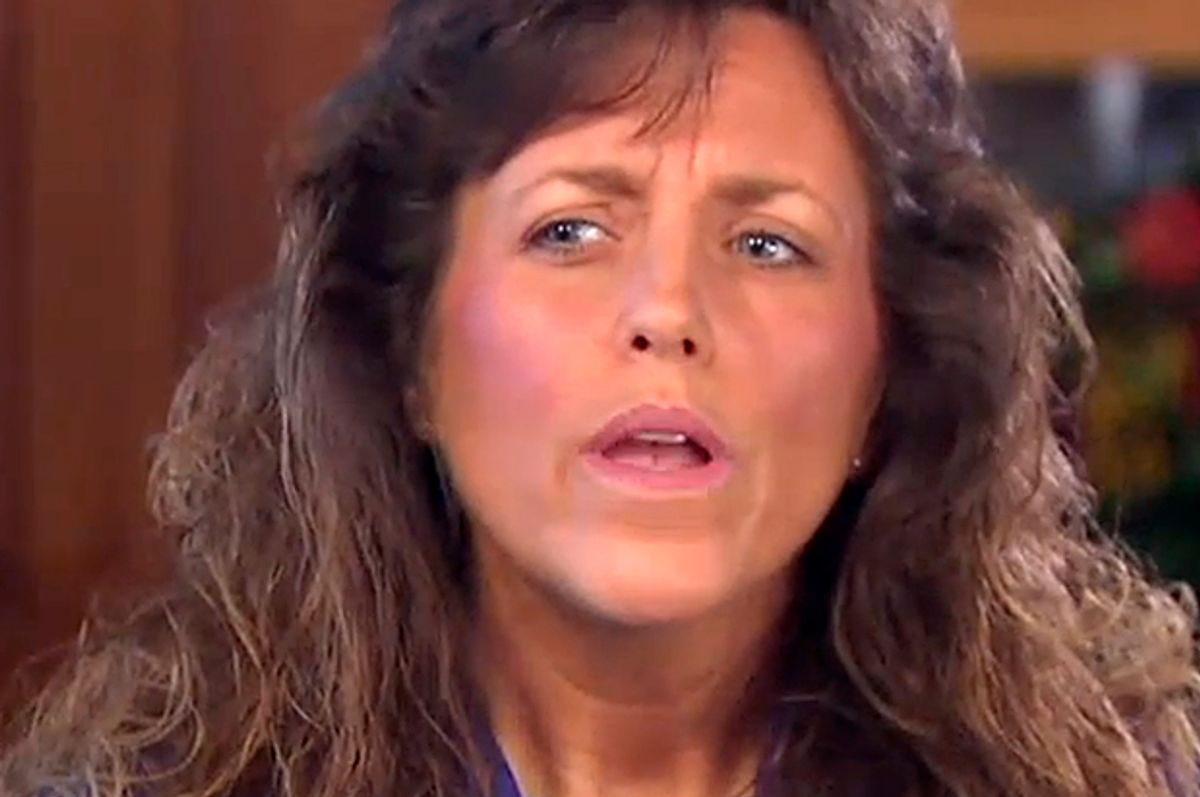 Megyn Kelly, avenger, swooped in to get an interview with the victims in the Duggar family molestation case. The victims being parents Michelle and Jim Bob Duggar, of course. In the span of an hour Wednesday night, Fox News transformed the disturbing Duggar family into culture war martyrs, targets of the most vicious liberal attacks since the War on Christmas.

The Duggars delivered a stunning display of deflection, the longest exercise in self-absolution since Gov. Chris Christie’s two-hour pity party when Bridgegate was revealed. The right wing Christian activists and LGBT antagonists found unbelievably creative ways to minimize what son Josh did when he molested four of his sisters, and a baby sitter, in seven separate incidents.

What Josh did “was not rape,” Jim Bob said. "None of [the girls who were molested] were aware of Josh’s wrongdoing,” Michelle added. In fact, “they probably didn’t even understand it was an improper touch.” The improper touching mostly took place “over clothes;” oh, and the few times it was under clothes? “It was like a few seconds.”

And when he molested his babysitter? “It was more just like a fondling, a touch while they were asleep—for most of them. Then there was two other incidents that were when they were awake. And it was just a bad thing.”

“Looking back, we did the best we could under the circumstances,” Jim Bob told Kelly. He and Michelle did what every parent would do: Nothing, really, the first couple of times Josh himself confessed the abuse. Well, not exactly nothing: They prayed, and then they took him to a state trooper, who gave him a stern lecture. Then they got him counseling with an “accredited” agency, but they wouldn’t say what it was.

“As parents, we’re not mandatory reporters,” Jim Bob shared. That’s a reference to laws requiring adults -- teachers, coaches, counselors, neighbors -- who learn about child sexual abuse to report it to authorities. Good to know the Duggars find solace in the law.

They took other big steps to prevent further abuse: “We don’t let boys babysit,” Michelle explained. “They don’t play hide and seek together, two don’t go off and hide. There are just a lot of things that we’ve put in place.” For anyone who grew up playing with their brothers and boy cousins, as I did, that sounds insane.

Megyn Kelly can tell herself she asked all the tough questions. And she did ask some. But she mostly came off as an ally determined to help the Duggars fight their liberal persecutors. She regularly constructed straw men. Many observers have questioned why the Duggars brought Josh to visit a state trooper who was later sentenced to 56 years for child pornography; no one suggested, as Kelly claimed, that “they chose that guy because they thought he would be sympathetic.”

Kelly did ask Michelle Duggar about the robocall suggesting transgender people were child molesters, but Jim Bob stopped her:

Thanks for clearing that up, Jim Bob.

In the home stretch, Kelly let the Duggars tee off against their critics. “I feel like this is more about... there is an agenda and there is people that are purposing to try to bring things out and twisting them to hurt and slander,” Michelle said. Her daughters, she said, “have been victimized more by what happened in what has happened in these last couple weeks than they were 12 years ago."

"It has been an unprecedented attack on our family,” Jim Bob agreed. “And this information was released illegally. And so I'm wondering why all this press is not going after the system for releasing these juvenile records. That is a huge story."

But none of this was the worst. The worst was when Kelly teased her interview with two of Josh’s sisters who were victims. We got to see them cry – and indeed blame the family’s enemies for their suffering.  But we just got a snippet – because Kelly was promoting the show that won’t air until Friday night. Tune in!

Personally, I’ll skip it. Breaking my usual rules, I gave Fox an hour of my life I’ll never have back. There are times Kelly behaves like an actual journalist, and questions the toxic narratives her network peddles. This wasn’t one of them.