If Wes Anderson and Lars von Trier made a sitcom, it would look something like this strange Scandinavian comedy

At times bleak, ridiculous and hilarious, ""A Pigeon Sat on a Branch Reflecting on Existence" is wholly unique 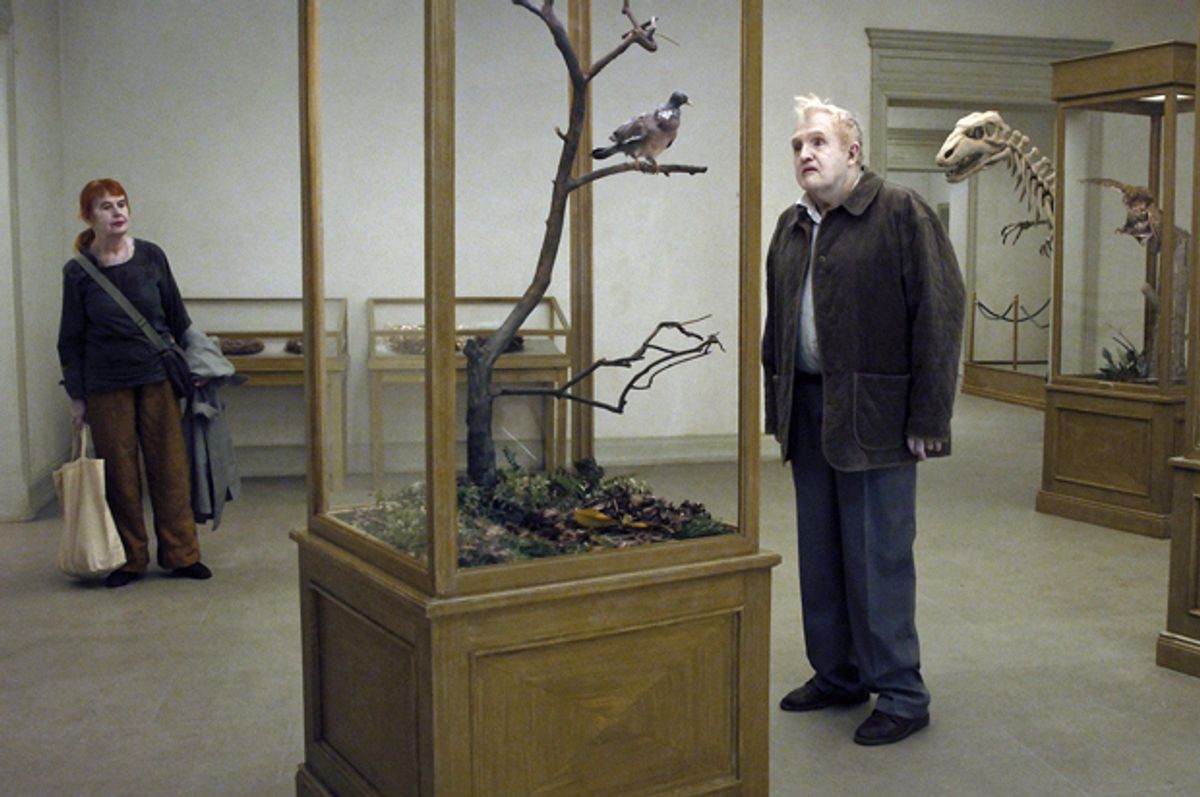 “We want to help people have fun,” intones one of the two depressed and downtrodden novelty salesmen who drift through the bleak, stylized Scandinavian universe of Roy Andersson’s indescribably strange film “A Pigeon Sat on a Branch Reflecting on Existence.” But the joke, if that’s the right term, lies in the fact that it’s hard to imagine anything less fun than these two guys, who deliberately recall Vladimir and Estragon from Beckett’s “Waiting for Godot,” and for that matter Stan Laurel and Oliver Hardy. They have extra-long vampire fangs. They have something called the “laugh bag,” a classic, they tell prospective customers, that is certain to bring a smile to parties, whether at home or in the office. They have great faith in a new product, a hideous mask known as “Uncle One-Tooth” – who actually does deliver one of the movie’s biggest laughs.

Yes, that’s right: As connoisseurs of Andersson’s previous work will know already (both of you, ha ha), his extreme-deadpan brand of Scandinavian humor can be shocking, upsetting, borderline incomprehensible and often very, very funny. Jonathan (Holger Andersson) and Sam (Nisse Vestblom) limp through a profoundly alienated world with a suitcase full of pathetic novelty goods, but they really are entertainers, just not in the way they think. Similarly, “A Pigeon Sat on a Branch Reflecting on Existence” has sex, war, musical numbers, running jokes and an erotic flamenco routine – everything you could want from a movie! – but not quite delivered in the customary manner.

Andersson embraces all the stereotypes about Scandinavians – they are gloomy, drunken and sexually repressed, and cannot express their emotions – and pushes them to the ultimate and most absurd extent. In an early episode that serves as a kind of prelude to this film, a man’s sudden death in a cafeteria (aboard a ferryboat, perhaps?) becomes the occasion for an important moral dilemma: What do we do with the draft beer he already paid for? Just before that, we’ve watched the middle-aged children of an ailing elderly woman surrender every possible shred of dignity and decorum while trying to pry free the handbag she is clutching, which contains the family gold and jewelry. She is determined to take it to heaven with her, and they are unwilling to take the risk that she may succeed.

This is a trite thing to say, I suppose, but Andersson has a way of making ordinary observations seem profound: Sam and Jonathan’s ridiculous predicament resembles our own. They keep on going even though it seems pointless, even as their assurances to each other that they’re in the “entertainment industry” and are going to do “big business” one of these days ring increasingly hollow. The bored, standoffish Swedish people around them barely tolerate their third-rate sales pitch, and seize any opportunity to sneak away, with feigned Scandinavian politeness. When they stumble upon a desolate shop that has supposedly sold some Uncle One-Tooth masks, the proprietor is in worse shape than they are: He’s lying in the back room, with a blanket over his head, moaning about how broke he is.

There’s no way to make an elliptical, episodic and purposefully artificial film in Swedish, whose subject may really be the enigmatic nature of human existence, sound super hip or contemporary or connected to larger cultural trends and issues. But in his absolute artistic fearlessness, his refusal to pander to perceived tastes or preconceived market niches, and his willingness to blend arch satire, moments of gentle joyousness, surrealist interludes and horrifying insights into the nature of Western society, Andersson may actually be way ahead of everyone else. “A Pigeon Sat on a Branch Reflecting on Existence” concludes a trilogy Andersson has been working on for 16 years, beginning with “Songs From the Second Floor” in 2000 and continuing with “You, the Living” in 2007. (The trilogy is about “life as a human being,” he has helpfully explained, and if that’s not Scandinavian humor in action, I’ve never encountered it.)

You can try to connect Andersson to other strands in cinema or art, but you do so at your peril. I’ve mentioned Beckett and silent comedy – his camera almost never moves, as in the films of Charlie Chaplin – but those aren’t enough. He has almost nothing in common with his countryman Ingmar Bergman, except the evident fact that both are obsessed with the silence of God, the elusive meaning of life and the guilty conscience of civilization. Maybe if Wes Anderson and Lars von Trier tried to write a sitcom together, the result would be something like “A Pigeon Sat on a Branch,” which essentially consists of a series of comic sketches whose gags are often revealed in their final seconds. Sometimes ancillary details in the edges of the shot come to seem like the real point: While Sam and Jonathan browbeat the dejected wife of the shopkeeper who owes them money, a small child plays happily with toys on the floor.

Much of the movie takes place in and around a drab waterfront café that begins to assume the allegorical quality of a traveler’s rest stop in “The Canterbury Tales” or a nightclub in a Brecht-Weill musical. On one occasion the café morphs into the set for a wistful, sexy 1940s-style song-and-dance number using the melody of “Battle Hymn of the Republic.” We hear the same music again in quite a different context, when King Charles XII and his troops stop by on their way to (and then from) the disastrous Battle of Poltava in 1709, which led to the dismemberment of the Swedish Empire. (Believe me, I had to look that up.) At first the café’s jeans-clad, cellphone-using 21st-century patrons don’t seem comfortable the unexpected appearance of Sweden’s last absolute monarch, or to the fact that he hits on a handsome young man behind the counter. But then, they’re Swedish; they’re never all that comfortable in any context.

There are two scenes late in the film that strike a sharply discordant note, and that pull away from Andersson’s dominant mode of dry, doleful comedy to deliver a scathing indictment of the historical cruelty and criminality that has made the affluent detachment of Swedish society (and by extension the rest of Western civilization) possible. I won’t say anything more except that I think every moment of this film has been carefully calibrated, and that Andersson achieves the effect he seeks. Jonathan, at least (unless it’s Sam) is aware of the problem: He has been involved in something terrible, he tells his partner. It might have been a dream, but it feels like something that really happened, and no one, himself included, has asked for forgiveness. But another day is dawning, and it’s time to go sell some extra-long vampire fangs.

“A Pigeon Sat on a Branch Reflecting on Existence” is now playing at Film Forum and the Lincoln Plaza Cinema in New York. It opens June 10 in Charlotte, N.C.; June 12 in Boston; June 19 in Tucson, Ariz., and Austin, Texas; June 26 in Iowa City, Minneapolis and New Orleans; July 3 in Rochester, N.Y.; July 7 in Gainesville, Fla.; July 10 in Denver, Hartford, Conn., and Santa Fe, N.M.; July 14 in Pittsburgh and July 17 in Portland, Ore., Seattle and Winston-Salem, N.C., with other cities and home video to follow.