My favorite singer is a jerk: A Mark Kozelek super-fan steps down

I adored his sensitive music — but his abrasive behavior keeps crossing the line, and I've had enough 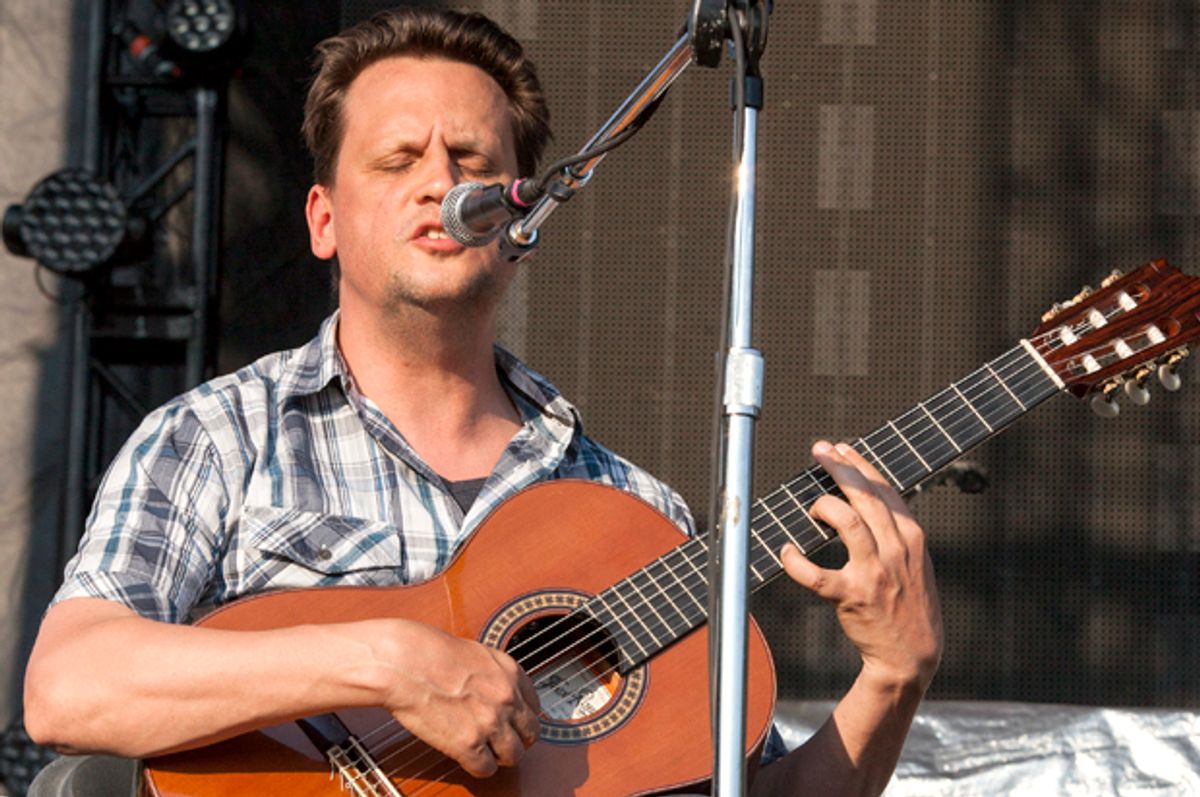 Earlier this week, Mark Kozelek, the songwriter behind dreamfolk band Red House Painters and the Neil Young-inspired solo act Sun Kil Moon, performed at the London Barbican. A concert review published on the website of the U.K. magazine Uncut is quite complimentary about both the show's music and stage patter--at least at first. When Kozelek comes back onstage for an encore, the writer reports that the musician starts talking about "a British journalist who has, for reasons that are not entirely clear, annoyed him." Musicians grumbling about the press are a dime a dozen, but suddenly, this banter takes a turn for the worse: "Then he begins a spontaneous song about the writer – a woman – about how she 'totally wants to fuck me' and how she should 'get in line, bitch.'" As if that wasn't bad enough, Kozelek doesn't drop the charade; the review notes the musician also "calls the writer 'nice,' 'sweet,' 'cute,' as if that would make things better, and claims he was 'just kidding.' He then sings the song again."

It goes without saying that it's inexcusable to unleash unprovoked misogynistic vitriol on someone, especially someone who isn't even present to respond. (Furthermore, backpedaling and calling such ire-filled stage patter a "joke" is one of the most tired, flimsy ways to excuse offensive behavior, because it refuses to take responsibility for any inflicted hurt.) However, earlier today, a new Guardian profile on Kozelek gave even more disturbing context to his Barbican comments. This feature was written by Laura Snapes, the British journalist referred to by name in the improvised song; as it turns out, she had recently conducted an email interview with the musician, after he had declined an in-person meet-up for the story. She had also innocuously reached out to other musicians for the piece (standard practice when writing profiles), which is what apparently set him off during the show.

Either way, Kozelek's typed response to one of Snapes' email questions stood out above the rest, mainly for its blatant sexism: “You think you’re the only person who wants to get a face-to-face interview with me? Get in line. I’m the best person you never met and one day, if you ever meet me, you’ll probably want to have my baby.” Never mind that Snapes is a respected journalist whose work has appeared in publications such as NME and Pitchfork in addition to the outlets mentioned; in Kozelek's eyes, her interest in his music had romantic subtext.

Yet his inappropriate leering was no isolated incident. In fact, these comments are part of a pattern of behavior: Within the last year or so, Kozelek has tangled with (and written a dis track about) the band the War on Drugs due to overly loud sound mixes, deemed another reviewer “some spoiled bitch rich kid blogger brat" and called a North Carolina audience "fucking hillbillies." When, unsurprisingly, there was an uproar over all of these comments, the musician assessed some of his banter as "jokes" and then reinforced his position by noting, "There is an epidemic of people being ‘offended’ by things as some kind of hobby."

Until this week's incident, I've mostly been observing these incidents from afar, with both puzzlement and disappointment. Like the Uncut reviewer, I'm a longtime fan of Kozelek's music, someone who's purchased the entire Red House Painters catalog and a good portion of Sun Kil Moon's output as well. I've written favorably about the latter act's albums for other publications, and have always felt pride that Kozelek hails from Northeast Ohio, which is where I'm from. Red House Painters' ability to tap into deep wells of loneliness and emotional confusion very much resonated with me at pivotal times in my life, with Kozelek's faraway, watercolor-hued voice matching my own sense of misplacement. Sun Kil Moon's music as well struck a nerve, whether it was the autumnal nostalgia and yearning of 2003's "Ghosts of the Great Highway" to the stark, nylon-string-guitar compositions on 2012's "Among the Leaves." Even the Modest Mouse songs on 2005's "Tiny Cities" felt more relatable to me, when interpreted and rearranged by Kozelek.

But with this latest unprovoked attack, I've found myself completely ambivalent toward all of this music I own, as well as uninterested in hearing a note of Sun Kil Moon's new record, "Universal Themes." Knowing all of this extracurricular antagonism makes it difficult for me to get back into a mind-set where Kozelek's music holds sincere emotional sway for me. Reconciling the musician who once plaintively crooned, "Have you forgotten how to love yourself?" in relation to feeling like he's lost a part of himself, with the musician lashing out at supporters is feeling nearly impossible. These perceptive moments are now retroactively disingenuous to me, this sensitivity incompatible with the abrasive approach that I've observed.

Of course, separating the songwriter from the person is necessary if fans want to enjoy most music. Boycotting acts for indiscretions makes it difficult to dig up many musicians with squeaky-clean reputations: Problematic personal choices--from unsavory lapses to actual criminal acts--are integral to the mythologies of countless legends, whether it's Chuck Berry's jail time for alleged statutory rape to John Lennon's tendency to abuse. In some cases, being famous insulated these artists from widespread exposure of their actions, and their bad behavior went unnoticed (or underreported); simply being a talented musician meant that there was no way their personal character could be less than sterling. In other cases, different moral yardsticks ensured that many actions considered outrageous and vile today were viewed very differently at the time they occurred. That doesn't excuse them or make them OK--but it does explain why so much eyebrow-raising behavior was swept under the rug.

In recent years, however, there's more of a movement to stop musicians from using their stature to skirt accountability. There's Jessica Hopper revisiting and redirecting attention to the sexual assault allegations against R. Kelly; the highly publicized online vitriol directed to Chris Brown for beating up then-girlfriend Rihanna; widespread reporting on a sexual assault incident involving a member of Surfer Blood; and recent articles noting the band Set It Off and its bassist parting ways over sexual harassment accusations, and the allegations of sexual impropriety against acoustic-emo act Front Porch Step. Certainly most of these instances are more severe than a musician running his mouth from the stage (even though gauging the level and impact of impropriety is not a competition). What's more important is that these things are receiving press coverage: Deconstructing the myth that performers are untouchable goes a long way toward ensuring they don't get away with things, reminding artists that actions have consequences.

The issue many times comes down to personal preference and tolerance: What kind of behaviors and actions fans are willing to accept (or overlook) if they otherwise enjoy an artist? After all, one person's line-crossing is another person's "Who cares?" Certainly it's not expected that musicians all need to be perfect, and, of course, plenty of amazing, enduring and life-changing music has poured out of artists who are unpleasant, confrontational personalities. Art doesn't have to be spoon-fed or easy (and nor should it be). And, of course, artists can and do change over time, growing and maturing into people who may even be embarrassed at their past actions. (Hello, Beastie Boys.)  But in some cases, there comes a point where even the best creative intentions and moving artistic gambits are overshadowed by professionally damaging incidents and non-music-related dealbreakers.

And so that's where I'm at with Kozelek's entire oeuvre. After last year's drama, my interest in his music certainly waned, but I didn't necessarily rule out giving his new tunes another chance. Now, I'm just about convinced that I don't have any reason to check out future music, especially when there are countless other respectful, thoughtful, women-friendly artists out there with stories to tell. I'm just one of many Kozelek fans, so me taking a step back probably doesn't mean much in the grand scheme of things. But the idea that I could just as easily have been that journalist diminished and humiliated from the stage has permanently altered my perceptions and opinion of his art. In fact, I'm feeling like it might be time to tuck those Red House Painters records away permanently.