The media's most destructive meme: Why we need to admit that the GOP's extremism is virtually unprecedented

For years, the political press has covered for Republicans, insisting (without evidence) that Dems were just as bad 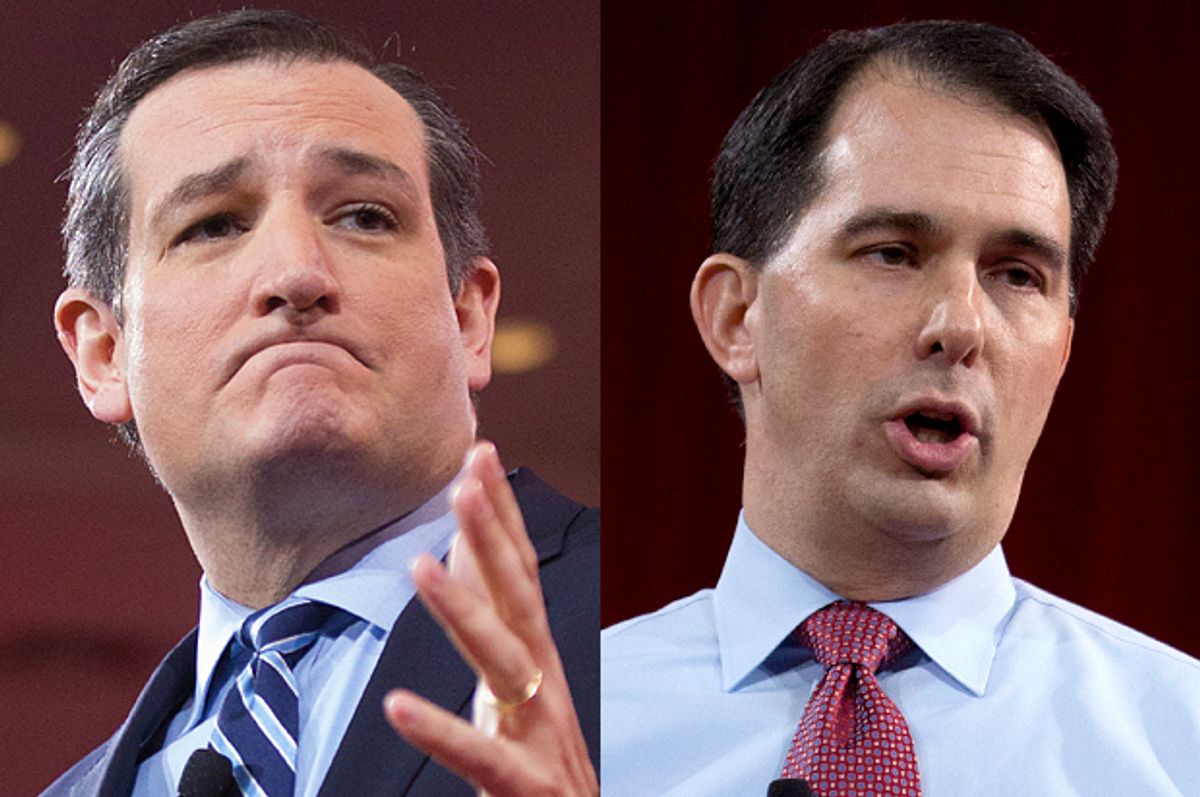 It seems to be an article of faith among many in the chattering class that while it's no longer debatable that the right has drifted a bit more rightward in recent years, the left --- already far out on the fringe --- has moved equally leftward, thus making the "center" the place where all the Very Serious People of the political establishment reside. This way, when the Republican party shows itself to be completely irresponsible, they needn't feel uncomfortable. They can, in their minds always find some corollary of crazy on the left.

For instance, when presidential aspirant Senator Ted Cruz says something kooky from the right side of aisle like this (about fellow Republicans who wanted to abandon the defunding of Obamacare):

"Look, we saw in Britain, Neville Chamberlain, who told the British people, ‘Accept the Nazis. Yes, they’ll dominate the continent of Europe, but that’s not our problem. Let’s appease them. Why? Because it can’t be done. We can’t possibly stand against them.’”

Very Serious People can always respond with what they see as an equally kooky quote from presidential aspirant Senator Bernie Sanders on the left side of the dial:

"In my view, a corporation is not a person. A corporation does not have First Amendment rights to spend as much money as it wants, without disclosure, on a political campaign. Corporations should not be able to go into their treasuries and spend millions and millions of dollars on a campaign in order to buy elections."

Sure, some might think that bringing up the Nazis in the context of Obamacare is over the top, but railing against the idea of corporations having First Amendment rights when the Supreme Court has clearly said they do is just as extreme, right? And anyway, he actually calls himself a socialist, which is so kooky that you don't really even have to know any more about him to see that he's a far left nut.

It is true that the recognition of the right being a little bit out to lunch -- maybe even a touch out of step with the mainstream of the country -- is very recent. In fact, up until just a couple of years ago, the political establishment maintained the fiction that "America is a conservative nation" which furthermore was extremely hostile to liberalism. This belief was pretty much based upon one election held three decades ago in which it was excitedly observed that certain white Democrats decided to vote for Ronald Reagan because they just couldn't stand those hippies anymore.

This idea was largely based on the work of Democratic pollster Stan Greenberg. Greenberg studied a particular group of white working class voters in Macomb County, Michigan, who came to the conclusion that the Democratic party cared more about poor people, people of color and women than it cared about them. They also didn't like all that long haired hippie-dippie stuff about sex and drugs and really wanted to kick the Russians' asses. They had had a long standing relationship with the Democratic Party mostly based upon its support for their unions. By 1980, they felt pretty secure, apparently, and didn't think they needed that support anymore. (How'd that work out?)

This finding electrified the political establishment (which never seemed to see the correlation between these white working class northerners and the white southerners who had been abandoning the Democratic Party for the better part of two decades for some reason.) They had long been attached to the idea that the Real America was rural and suburban, white and conservative. (I wrote about the genesis of that belief among members of the modern political media here at Salon a while back.) Everyone else, liberals, people of color, city dwellers were members of a fringe.

This goes back all the way to the beginning of the country (maybe human civilization itself) in which the tension between the country and the city always finds a way to play itself out in how the people are organized. But let's just say that in this case, the idea that the United States of the last 35 years was monolithically conservative was always an overstatement. The right was just very good at being the loudest and most aggressive political players in the game. And they were very well financed.

But a funny thing happened on the way to the revolution. They lost control of the troops, who have become more and more extreme and are now little better than an ungovernable mob. (The reasons for this are hotly debated everywhere, but I think Bruce Bartlett has one of the answers: Fox News and related partisan media.) Some of us thought this was obvious more than 20 years ago when powerful congressmen started shooting watermelons in their backyards as part of their "investigations" and prosecutors were putting pornography on the internet allegedly in the name of public decency. The fact that the Speaker of the House ascended to his job largely on the basis of a ruthless propaganda campaign waged for many years against his political rivals should have been a tip-off.

But better late than never. A few years ago, well-known mainstream political scientists Norman Ornstein and Thomas Mann wrote a story called "Let’s just say it: The Republicans are the problem" in the Washington Post, which made the obvious observation that the GOP had gone over the cliff and bore responsibility for the gridlock and dysfunction that defines Washington. (They also wrote a book based upon this observation called "It's Even Worse Than It Looks: How the American Constitutional System Collided With the New Politics of Extremism," which ended up getting them blacklisted from television, where they'd been fixtures for years.) Basically they just said the GOP emperor was stark raving nude: It had become "ideologically extreme; scornful of compromise; unmoved by conventional understanding of facts, evidence and science; and dismissive of the legitimacy of its political opposition."

But perhaps their real crime was in writing that the political media (which has very sensitive feelings) had persisted in presenting the two sides as equally culpable in this disintegration of our political system, and was, therefore, partially responsible for it. Mann was quoted after the 2012 election saying:

"The mainstream press really has such a difficult time trying to cope with asymmetry between the two parties' agendas and connections to facts and truth...I saw some journalists struggling to avoid the trap of balance and I knew they were struggling with it -- and with their editors. But in general, I think overall it was a pretty disappointing performance."

There is little reason for optimism that this is going to change. The press is as prickly about their prerogatives as ever and are already indicating that they are preparing to revert to the puerile navel gazing that characterized their approach to this in the 1990s. (When it becomes necessary for them to look at the naked emperor they inevitably decide it's really all about them.)

But Ornstein and Mann are not the only ones making this case anymore. Yesterday, the Washington Post's Wonkblog ran a post by Christopher Ingraham in which he draws attention to this widely discussed op-ed by former GOP official Peter Wenner, in which Wehner fatuously claimed that Democrats are the crazy extremists (or at least no less crazy than the Republican extremists.) Ingraham created some charts to illustrate just how dramatically the Republicans have radicalized by comparison. And he wrote:

The most widely-used measure of political polarization, a score of ideology based on voting developed by Kenneth Poole and Howard Rosenthal, has shown that the Republicans in the Senate and especially the House have drifted away from the center far more rapidly than Democrats.

This would be roughly the same time that the modern conservative movement started to hit its stride, culminating in Ronald Reagan's victory a few years later.

Ingraham goes on to point out that the data shows that nearly 90 percent of House Republicans are not politically moderate while nearly 90 percent of House Democrats are politically moderate. It doesn't get any more stark than that. Not only is the United States not a "conservative" country, the party that identifies as conservative has gone so far to the right that it no longer has any claim on moderates or centrists. In a country with only two parties, that is amazing. You would think that data like this would make the press take a very close look at the upcoming elections with a completely different viewpoint than they've had in the past. It's a huge story!

But I would not count on it. To use their own tired formulation, they are so far blindly following a "narrative" that's being fed to them morsel by morsel by this same extreme Republican Party in which the "real story" of the campaign is about arcane, unintelligible scandals that are based upon a lot of innuendo about "appearances" and almost nothing of substance. It's a very neat trick by the Republicans. They may be extreme right wingers but they know exactly how to seduce a willing political media into focusing on anything but their growing fanaticism.

"If you want to use a strategy of 'I'm just going to lie all the time', when you have the false equivalence meme adopted by a mainstream press and the other side lies a quarter of the time, you get away with it."

They may not win the presidential election. But it doesn't look as if the press is going to tell the American people what's really happening in their politics either. The consequences of that aren't likely to be positive if what you care about is a functioning democracy.