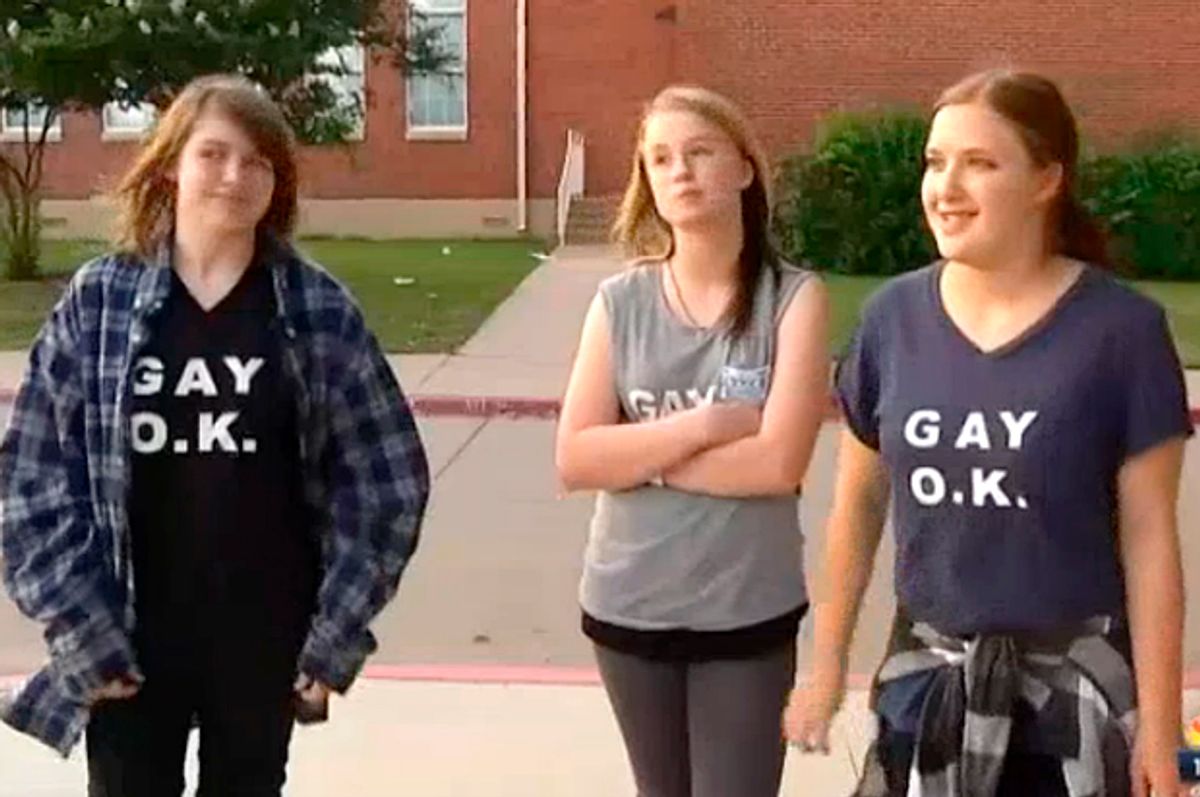 In schools all across America, right now, there are among the students gay students. This should not a controversial idea. It should not be up for discussion or debate. And the sexual orientation of kids who are gay is as much a part of their identity as it is for ones who are straight -- no more, no less. So why then do we still have schools that are so skittish around acknowledging that gay people exist, and that gay people exist in their own student communities?

At Faubion Middle School in McKinney, Texas, students claim they were sent home Wednesday for wearing shirts with the words “Gay O.K.,” and that "several others" were also told to cover up the message. At least 15 students had worn the shirts to school to express support for a seventh-grade classmate who recently came out and, they say, has been the target of bullying.

Student Anna Thompson told the Dallas Morning News that when she arrived at school Wednesday, an administrator "came up to me and said that he doesn’t believe this message is school-appropriate." But for classmate Sammy Heiman, who designed the shirts, "We were doing perfectly fine until lunch." Then, she says, school officials "called us all out, all the people wearing them, called us out of the cafeteria. And people started getting rowdy because they knew what was going on. They were making us take off the shirts." WFAA reports that in a cellphone video of the incident, you can hear "some chanting 'Gay O.K.,' while others were heard chanting 'Gay isn't O.K.'"

The students claim they were not in violation of the school's policy against clothing "which displays sex, violence, drugs, tobacco, alcohol, death, gang or hate slogans or pictures," but district spokesman Cody Cunningham cites the part of the dress code which forbids "any disruptive or distractive mode of clothing or appearance that adversely impacts the educational process is not permitted."

Cunningham told the Dallas Morning News, "In this particular case, a verbal disruption occurred between a large number of students in the cafeteria as a result of the shirts… This was not a civil debate, but rather yelling and shouting, and [it] alarmed a large number of students…. While we respect student free speech, our primary obligation is to ensure a safe and productive learning environment."

So based on the information that the students and administrators have shared, it would appear that the school decided that the students who were there in support of a bullied gay friend were the ones to be sent home and told they were being disruptive. Got it!

Maybe the school didn't get the memo that trying to quiet conversation about LGBT issues is a great way to actually create more issues. In Colorado recently, officials at Twin Peaks Charter Academy in Longmont told high school valedictorian Evan Young he would not be permitted to give the commencement speech he'd submitted to them because it was "inappropriate." Young says he'd planned to use the speech to come out. Principal BJ Buchmann reportedly requested Young omit the references to his personal life, and then called the young man's father -- and prematurely outed him to his family.

Young says, "I made all the edits that they asked me to; I just refused to take out the part where I say I'm gay, because I thought that was the most important part of the speech." Young went on to deliver his speech at an Out Boulder fundraiser, and later on Larry Wilmore's "Nightly Show." The school, meanwhile, is now launching a review of its actions.

It's not too late in the school year to wake up and smell the 21st century, school administrators — and kids who don't like the idea that their classmates are not all straight. This is the world in which we live, and gay kids aren't going to now be gay in silence for your comfort. They shouldn't have to be. And kudos to schools that get it, and students who are encouraged to be exactly who they are, like recent Oak Hills High School grad Caitlyn Cannon, whose yearbook quote went viral for declaring, "I need feminism because I intend on marrying rich and I can't do that if my wife and I are making .75 cent for every dollar a man makes." Speaking to the Huffington Post last month, Cannon explained, "I've never really been ashamed to say that I am gay, so the LGBT aspect was simply who I am." And anyone who doesn't understand that is a person who definitely needs to get educated.