Mike Mills: "As ambivalent as my relationship is to videos, the fact is that R.E.M. and MTV kind of grew up together" 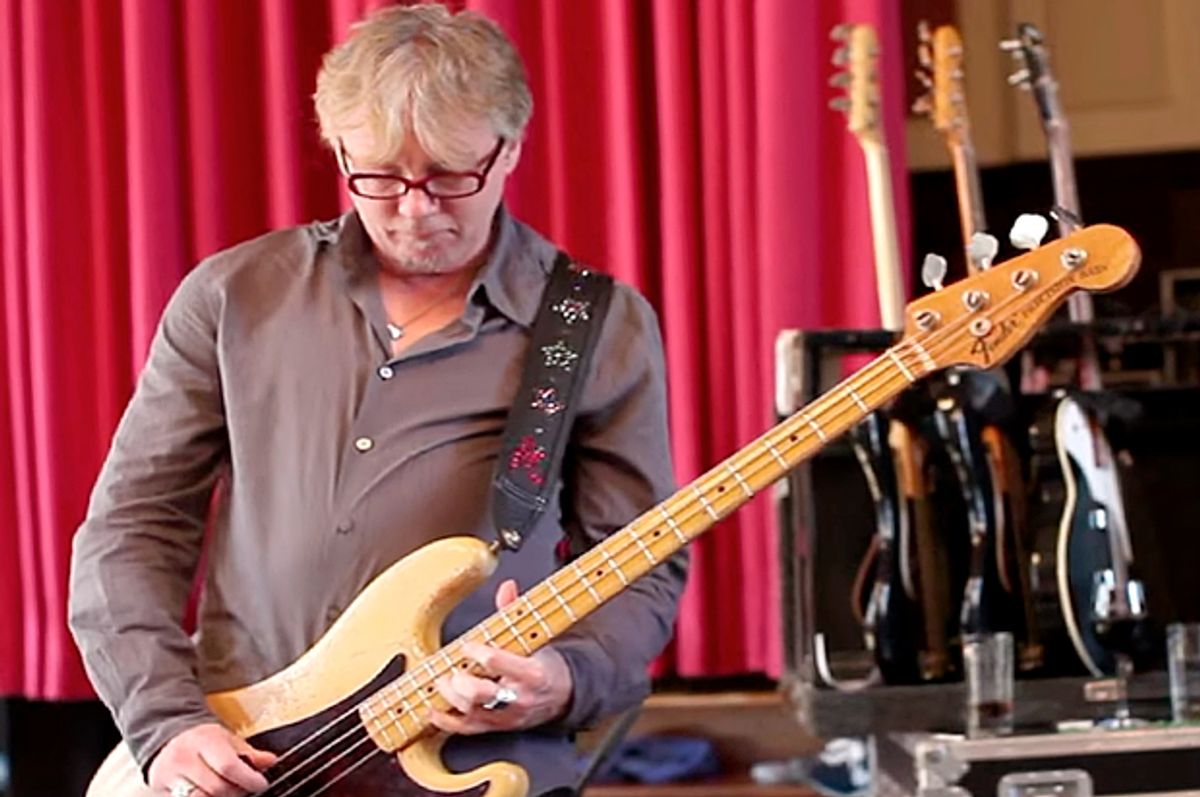 Although R.E.M. broke up nearly four years ago, the band has compensated for its absence by releasing a steady stream of archival material. Last year's DVD extravaganza "REMTV" was a treasure trove of high-quality video interviews and concert performances (especially for fans still holding on to dusty VHS tapes of appearances dubbed from TV), with one of the highlights being a new documentary, "R.E.M. by MTV." Even for devoted fans, the documentary had plenty of surprises--from the band's fabled appearance on the Nickelodeon kids' talk show "Livewire" to rarely-seen interviews unearthed from the channel's archives.

This week, "R.E.M. by MTV" is released separately on DVD and Blu-Ray. Salon caught up with bassist Mike Mills (who was on vacation in an "undisclosed location") for a brief look back at "R.E.M. by MTV" and the impending 30th anniversary of R.E.M.'s "Lifes Rich Pageant," as well as conversation about new Baseball Project music, what bands he's digging lately and funny Twitter accounts devoted to cats.

R.E.M. was never interested in looking backward, so is it strange for you to be in a position now when all this stuff comes out, it’s all about looking back in the past?

Not really strange at all, because once you’ve made the decision to create nothing new going forward as a band, then it feels okay to assess your career and look back at it and see what it actually was.

When you saw “R.E.M. by MTV,” did it give you any new or different insights or perspectives on the band's career?

I wouldn’t say it gave me any new insights. It made me realize how lucky we were and what a good run we had. I think we did good work within the parameters we set for ourselves and I felt like it was something I could look back and be proud of.

I was really impressed that the director, when he put it together, really went digging in the archives. I thought that I had seen everything, and there were some interviews where I was like, “Wow, I had no idea that existed.”

Yeah, there were a few things I’d forgotten about as well. But I really appreciated the fact that they worked so hard at it. We did do a lot of stuff over 30-plus years, and I appreciate that they took the time to show that.

It also underscored how much MTV really supported you guys early on, too, which I think sometimes is something that people forget.

As ambivalent as my relationship is to videos, the fact is that R.E.M. and MTV kind of grew up together, and we were very helpful for each other. [Laughs] So it’s only fitting that they had access to all that information. It’s all that Viacom stuff; they had Nickelodeon, as well as the MTV stuff, which provided a couple of humorous moments.

I remember watching that Nickelodeon show "Livewire" when I was a kid, so I was really tickled that they had really high-quality versions of that, because that was such a goofy show.

Is that the one where we’re sitting there on the stage being interviewed?

Yeah, on the carpeted stage.

Yeah. [Laughs] We were all kind of nonplussed to be on there. We didn’t really know exactly who we were reaching for with that show, but it was fun to do.

Speaking of looking back: "Lifes Rich Pageant” turns 30 years old next year, which is the album I think many fans feel is the turning point in the R.E.M. catalog. The approach you guys took on the album was such a polar opposite from the experience of “Fables of the Reconstruction,” which I have to imagine was pretty deliberate.

Yes it was. I enjoyed working with ["Fables" producer] Joe Boyd, but other than that, that process was kind of difficult. It resulted in a great record and one that has as much its own sound as any record we ever did. But we definitely wanted to switch it up after working in cold, alien London, which in 1985, 1986, was a pretty strange place to be. We wanted to work somewhere comfortable and sunny and make a loud, noisy rock record.

What stands out to you now about the experience of making "Lifes Rich Pageant," of being in the middle of heartland America, working with Don Gehman?

It was really fun. It was a very pleasurable experience. I learned a lot from Don, I really enjoyed working with him. We had a great time in Bloomington. It really was a polar opposite experience from making “Fables,” other than the fact that I really liked both producers and consider them friends to this day. Other than that it was just a complete opposite experience and it was something we were really ready for.

It also contains “Superman,” which has evolved into such a fan favorite song, with you taking lead vocals.

Well, it was just one of those things. Pete and I really loved the song and it was better than anything we had lying around, so we stuck it on there.

As a longtime baseball fan, how special was it for you recently to play with The Baseball Project at Cooperstown at the Baseball Hall of Fame?

That was a wonderful, wonderful night. We had visited the Hall of Fame before. There’s a great brewery up there called Ommegang that does a great outdoor summer series of concerts. We played that a couple of times and toured the Hall while we were there. To actually play in it was pretty special. The stage is a replica of old Comiskey Park in Chicago, and you’ve got to figure the people there are baseball fans and will understand the songs, the subjects that we’re singing about. So it was a lot of fun.

It seems like the Baseball Project is really having a great time on this particular run of dates.

We’re all very good friends from way back, and we all enjoy a lot of the same things. There’s just a lot of joke-cracking and baseball talk and music playing. It’s just all the things that we all love to do, and we get to see both major and minor league parks and games, and that’s a big thrill for us as well.

Are you getting any inspiration for any new songs or new characters to feature?

I have a new song that we’ll probably bring out on the next leg of the tour, which starts in Atlanta on the 18th of June. I’ve written a song about pitchers who use stuff on the ball. It’s called “Stuff.” [Laughs]

There are almost infinite ways to doctor the ball, and we’ve spoken with a couple of ex-major leaguers and apparently, especially after what just happened in Atlanta [editor's note: Brewers relief pitcher Will Smith was recently ejected from a game against the Braves and then suspended for having a "foreign substance" on his arm], everybody does it. Not everyone, but a very large percentage of pitchers do use some sort of stuff. There are a lot of different ways to look at it, and the Braves didn’t want to eject that guy, but they had to. He was just being so obvious about it that they couldn’t let it go.

Well, yeah. Especially now after everything in baseball, all the rules that have been broken, you have to these days. You can’t just let that stuff go.

The actual use of putting stuff on the ball is just pretty pervasive. The hitters are like, “Yeah, I don’t want you scraping it with a nail file, but neither do I want you letting it slip out of your hand and hitting me in the head.” So it’s an interesting way to look at it, as cheating or accepted cheating.

Bending the rules, I think, as they say.

Bending the rules, yes. As my friend Bob Whitaker says, “If it bends, it’s funny. When it breaks, not so much.”

What else are you working on musically, besides the next run of tour dates? Do you have anything in the works, or collaborations or anything?

I’m working with my friend Robert McDuffie, the concert violinist. We’re trying to put together a concerto for rock band with strings. That’s in the works; hopefully it will come out next year some time.

How different is that, working on something like this, as opposed to something a little more traditional, like with a rock band?

The nucleus of it is the rock band, so in that sense it doesn’t change much. I just have to try to think of melodies that will be good for the violin. That’s really the ultimate difference at this point.

One thing I've noticed since R.E.M. called it a day is that you and Peter and even Michael, in terms of music, you guys have really branched out as musicians and done interesting side projects. I saw you performing with Joseph Arthur a couple years ago, and playing with him, you were able to stretch out as a player so much more, which I thought was cool. Thirty-some years into a career, it must be nice to be able to do something like that.

It is. It was actually kind of a throwback to my high school days. Bill Berry and I were in a band that, we were not a jam band by any means, but we did have guitar solos, and we did have a lot of dynamics, the songs were more fluid. With R.E.M., the set list changed every night, but the songs were pretty much the same, except for the odyssey-like “Country Feedback,” where Peter would take a solo. Generally, the songs were the same, even though the set lists were not. So with Joseph Arthur, there’s a bit of stretching and soloing and a lot more dynamics, fluid dynamics, than you would get with R.E.M. So yeah, it’s a lot of fun to play with Joe. He’s a tremendous musician and a great guitar player, so we have a good time.

I have to thank you too for the “My Sad Cat” Twitter account that you’re always retweeting. That thing is super funny, and I hadn't heard of it until you started retweeting it.

Cats are well-suited for all types of Internet humor, I think.

Yeah, because you can read so much into their expressions. Whether it’s really there or not, you can always put it in there.

Have you heard any new bands that you’re listening to, that you’ve really been digging lately?

Oh, man, let’s see. Of course, I always go blank when people ask me that question. I like Tame Impala a lot. Let’s see, what else do I like? I know there are, they’re just not popping into my head. I do like Tame Impala, though.

They are so good. I feel like a lot of people don’t listen to them because of their name, but they’re fantastic live.

Yes, they are, they’re good guys.[I also like] Futurebirds, out of Athens, too, they’re really good.

Finally, were you able to watch David Letterman’s last show?