In the end, Adelson's juggernaut of wealth, influence and power won't be able to stomp out the BDS movement 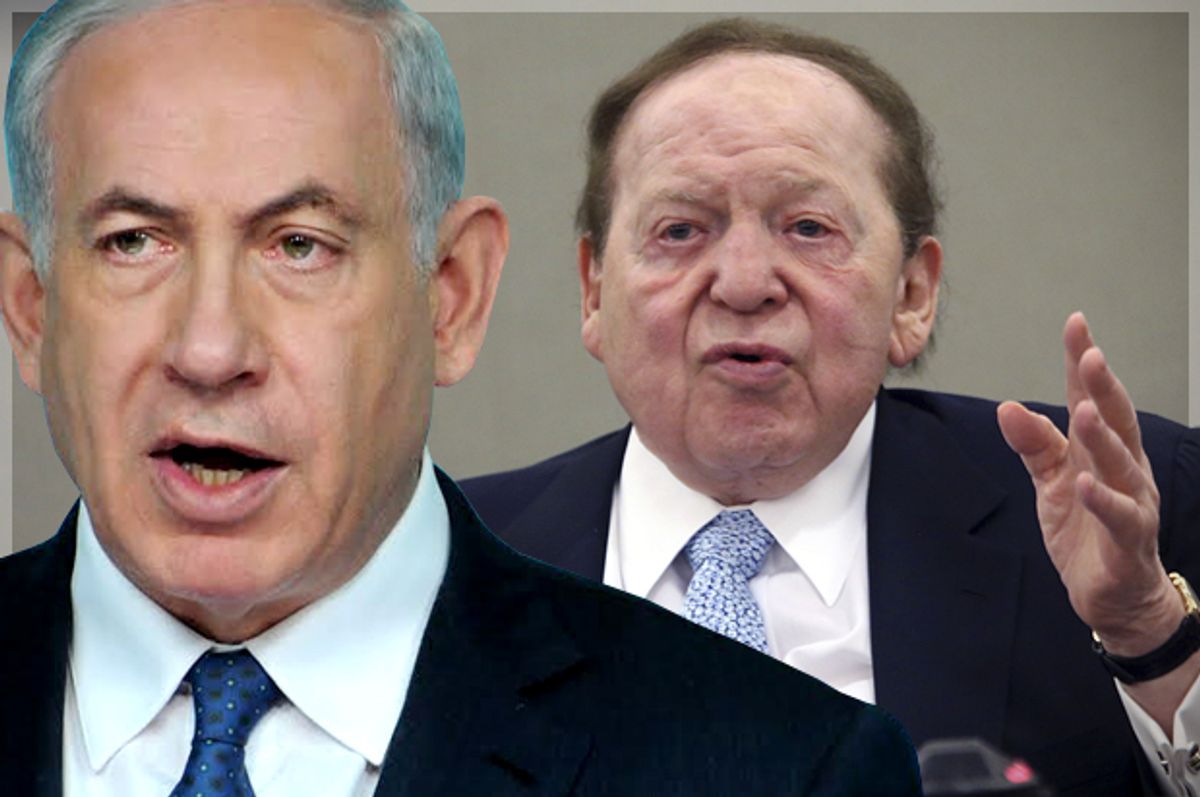 If you did not know that this weekend some of the wealthiest and most powerful people in the world will meet in the Las Vegas desert to plot a massive and well-financed campaign against the Boycott, Divestment, and Sanctions movement, it’s not your fault.  At the time of this writing, none of the mainstream media had covered it.  You would have to be a reader of news sources such as the Jewish Daily Forward or Haaretz, or Mondoweiss, to find out anything about this “secret” conference.

Most important, “The initiative … did not come from students on the ground, nor did it emerge from work of the many organizations involved in pro-Israel activism on campus. Instead, it is an idea coming from wealthy Jewish philanthropists who have decided to take action.” This is not at all dissimilar to how Adelson and others have tried to combat BDS via national and state politics, as I have reported previously. As such it connects up with many instances of these and other outsiders trying to stifle discussion of Israel-Palestine on college campuses.

Critically, this endeavor couples wealthy Americans fighting BDS with the machinery of the state of Israel itself: “Saban, a Los Angeles billionaire who is also a major Democratic donor with close ties to the Clintons, has been discussing the idea for more than a year, one source with firsthand information of the initiative said. Saban has spoken to Israeli officials, including the former ambassador to Washington Michael Oren and top officials in the Israeli foreign ministry, about setting up a special task force to deal with increased calls on campuses to adopt measures of boycott, divestment and sanctions against Israel.”

This collusion of conservatives and Clintonites, and U.S. and Israeli state operatives, to heavy-handedly interfere in campus discussions is pernicious and distasteful. And yet it is also an homage to the growing power of another constellation of actors: the nearly 200 civil organizations in Palestine who put out the call for Boycotts, Divestment and Sanctions in 2005, and those in the U.S. and elsewhere who have answered that call, including first the Association for Asian American Studies, then the American Studies Association and several other academic organizations, progressive Jewish groups such as Jewish Voice for Peace, student organizations throughout the country that have passed divestment resolutions (including the student government body representing the entire University of California system), and now labor unions.

Mondoweiss hits the nail on the head: “BDS is attracting young progressive Americans, and American Jews, because it speaks to their values, and their desire to make a difference.”

All the money in the world is not going to make a dent in BDS. Sure, there may be minor setbacks along the way, but anyone with a modicum of political intelligence knows that serious progressive political work, especially on the issue of Israel-Palestine, is long-term and incremental. What this kind of project needs is a steadily replenished and growing source of support and energy, and that is what it is finding in both young and older people and, especially telling, disaffected, disillusioned former supporters of Israel.

There has been a seismic shift in the way the topic of Israel-Palestine is discussed. It is being discussed heatedly and passionately, but most important it is being discussed with a desire to know more. Students tell me that nowadays the predominant sense is that no one can afford not to have an opinion, and, good students that they are, they do their homework.

Fortunately, when they do so, they do not have only the New York Times and the Washington Post to rely on. They have a worldwide set of information at their fingertips. And not just news outlets. They have immediate access to United Nations documents, to human rights organizations, and to the postings of individuals on the ground, and to news sources within Israel itself. And when they access this broader spectrum of information, the composite picture they piece together to inform them of the truth of Israel’s treatment of Palestinians and others in Israel and in the occupied territories is thoroughly damning of the status quo.

The pro-Israel machinery is churning out its messaging, but it’s only able to recycle a series of myths and arguments that are increasingly perceived as worn and tired and of dubious truth value. The idea that things are difficult but ultimately fine, and will get better if we just clamp down on BDS, is increasingly hard to sell.  Not only because people are finding out more and more about the history of the founding of the state of Israel and its illegal occupation from these multiple sources, but also because when they do start debating, when they do start to wrestle with these competing stories about Israel, more and more people are saddened and outraged.

They see before their eyes the actual ideologies of Netanyahu’s government put into practice, and these practices are now easily identified as continuous with a history of unjust, inhumane and violent practices. In sum, the present confirms the rightness of the version of the past as told from the point of view of Palestinians.

There is a moral and ethical fervor that is developing across the globe, and it is resulting in more and more articles, essays and testimonials.  And more discussion groups, more protests of different scales and natures.

Adelson and company can pull the usual levers, they can behave as if, as nearly always, they will get their way.  But they are making a huge strategic mistake that will not result in a victory over BDS, and will more likely turn people against them for this event concerning Israel-Palestine. The image of David and Goliath is not entirely unfitting here. In the end the juggernaut of wealth, influence and power is not going to be able to stomp out the grassroots activities that are springing up across the U.S. and across the globe, because more and more people are emboldened to act, and they are acting in concert with each other, unified not necessarily by BDS, but by the situation of the Palestinians, which has been so powerfully put before the world by BDS.

Adelson’s event should actually be seen as a huge compliment to BDS’s success, a fitting comment on another and hugely more significant event coming up this year — the 10th anniversary of the founding of the Boycott, Divestment, and Sanctions movement.