"We look like our livestock now": The author of "The Dorito Effect" on the chemically-enhanced junk food we can't put down

Salon talks to author Mark Schatzker about why the worse our food tastes, the more we eat 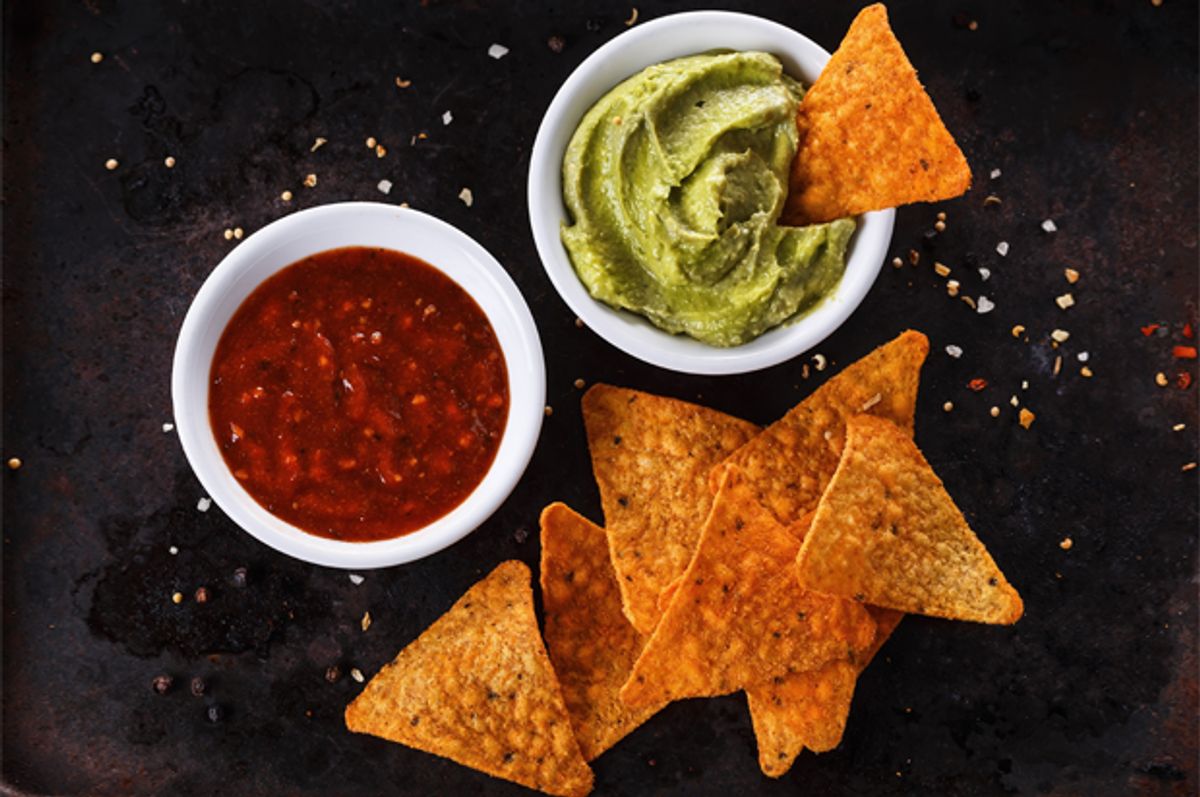 When Doritos first hit store shelves in 1964, they weren’t Cool Ranch Doritos or Jumpin’ Jack Monterey Cheese Doritos or Jacked Ranch Dipped Hot Wings Doritos. (That last one — believe it or not — is for real.) In the beginning, they were just triangular corn chips with a little salt.

What turned Doritos into a $5 billion global brand wasn’t variety or clever marketing. It was desire — the kind of laboratory-developed, biological desire that makes you want to eat another and another and another. “Without that synthetic flavoring, I don’t think people would eat much junk food at all,” says Toronto food writer Mark Shatzker.

In his new book, “The Dorito Effect: The Surprising New Truth About Food and Flavor,” Schatzker takes the fat, sugar and glut of calories that are causing obesity and goes a step further. The problem, Schatzker says, isn’t the what; it’s the why. We eat the bad stuff — the McDonald’s fries, the Krispy Kreme donuts, the Spicy Sweet Chili Doritos — because it’s chemically engineered to taste really, really good.

Salon caught up with Schatzker earlier this week to talk about why bad food tastes so good, why good food tastes so bad, and what he suggests to fix what’s wrong with what we eat.

There have been a lot of books and documentaries about food policy in the last few years. Are those things soaking into popular thought when you see McDonald's switching to non-antibiotic chicken?

It’s definitely sinking in. Consumers are getting more and more frightened of food, and the people who sell food — some of them, at least — are trying to stay ahead of that curve or do what they can to appear that way.

Accurate or otherwise, is there a perception that fast-casual dining — places like Chipotle — are healthier than fast food?

Is doesn’t bear out?

Not in every case. I don’t want to say they’re all bad. We love to beat up on McDonald’s, but a lot of restaurants in the fast-casual space imitate the McDonald’s model precisely. They manufacture food off-premises, heat it — they call it re-thermalizing — on-premises, and give it the sheen of having come out of a kitchen. In many cases, it would be better to describe that food as assembled rather than cooked.

The defense McDonald’s had offered before with healthier food like apple slices was: “Hey, we tried. People don’t want apples. They want Big Macs.” Is the non-antibiotic chicken different than that?

It’s a step, right? It’s moving in the right direction.

It is a step. I’m encouraged to see that consumers can flex their muscles. That’s a good point. A lot of people want to point out the hypocrisy that the restaurants aren’t doing enough, but at least they are taking steps.

I saw in the news this week that Target is going to start devoting less shelf space to packaged foods and more to healthy foods. Are you seeing that in other retailers?

Whole Foods is the clearest example of that. For them, it’s the whole ethos behind the company. Some of these big retailers are getting very interested in offering solutions instead of being part of the problem.

The basic premise of your book, as I read it, has two parts: The good stuff now tastes worse, and the bad stuff now tastes better. Start with the first part: You're saying meat and produce tasted better 30 or 40 years ago than they do now?

There’s been a drip-by-drip loss of flavor and nutrition in the food we grow. We keep telling ourselves to eat more foods at the same time as we’re making those foods taste ever blander. It’s not really that much of a surprise that people don’t want to eat them.

We certainly know about homogenization and commercial growing methods, but how you know the taste is worse than 40 years ago?

If you go to a farmer’s market and taste heirloom produce, it’s evident in a side-by-side comparison. Also, the scientific research on nutritional dilution is quite comprehensive. This is not a theory or something that home gardeners believe. It’s been measured. Flavor dilution goes hand in hand with nutritional dilution. There’s an association between the two. The harder we push output — quantity — the more we beat up on nutrition and flavor.

The second part, and what a good bit of the book is about, is that food companies have engineered food to taste better. Doritos and fast food, I get. Are there some subtler examples that would surprise people?

It’s in a bewildering array of products — soy milk, butter, yogurt. When food is bland on its own, we enhance it chemically and add a ton of calories to it.

And these flavors are not from what you would expect, right? Grape-flavored soda doesn’t come from grapes.

No. It couldn’t come from grapes — that would be too expensive — so they find the chemicals somewhere else to create the experience of grape. There’s no grape in it and, more importantly, none of the nutrition of grapes.

Did you go to some of the tasting panels that come up with these flavors?

Absolutely. I went to a flavor company and spoke to many of those people. They’re very talented at putting together thrilling combinations of flavors.

Do they defend this largely as giving consumers what they want?

Yes. It’s what consumers want, and they say over and over that overeating is a matter of personal responsibility. What they don’t think about and what no one has thought about is: Why does food have flavor in the first place? It’s a crucial question. If you start putting chemicals in junk food and fast food and soft drinks, you create the illusion of nutrition. You’re making things more delicious than they ordinarily would be. Without that synthetic flavoring, I don’t think people would eat much junk food at all.

We talked before the interview that it’s not just food. There’s artificial flavoring in cigarettes too.

One of the most striking and alarming things about flavoring is that it’s used in tobacco and has been for decades. I dug up a document from the tobacco industry from the early ’70s saying that young people are more inclined to smoke flavored cigarettes. They’re the same flavoring that you see [in foods] and for the same reason — it makes it taste better.

You wrote in the book that one-third of Americans are obese and another one-third are overweight. Is there any evidence that obesity has peaked or started to decline?

There’s a little evidence that childhood obesity has paused, but that could have been due to the recession. Anyone I know who studies this is as alarmed as they have ever been.

So you’ve really got two movements going on at the same time — enough of a sentiment to drive fast food companies to healthier options but still as fat as we’ve ever been. How are those things happening at the same time?

Humans are animals, so look for where the pleasure is. We’ve changed where the pleasure comes from in food. Until we right that imbalance, nothing is going to change because hardly any of us have the willpower to follow a diet of boring food.

That’s right. We’ve been on a nutritional witch hunt for decades. Fat, carbs, sugar. All of these things existed in supermarkets and restaurants in the 1950s when we were relatively trim. The question isn’t what are these nutrients doing to our bodies; it’s why are they getting into your stomach in the first place. It’s the behavior that’s changed. We have to start seeing food and eating as a behavior.

In Barry Estabrook’s new book (“Pig Tales: An Omnivore’s Question for Sustainable Meat”), he talks about how much better naturally raised pork tastes than factory-farmed pork. Did you come to basically the same conclusions about beef in your previous book (“Steak: One Man’s Search for the World’s Tastiest Piece of Beef”)?

One hundred percent yes, and I totally agree with him on pork. That meat — whether it’s heirloom pork, beef or chicken — is not only more delicious; it’s way more satisfying. It tastes better, and you eat less of it.

So you’re not a vegetarian. You’re more oriented toward how meat is raised.

My advice is to eat the most flavorful food you can. Eat like an Italian chef. Prize the most delicious ingredients, and you’ll eat well, and you’ll be thin.

Do you find responsible, humane livestock practices to correlate pretty highly with taste?

Absolutely. Our model for livestock is to cram them full of calories and to get them to be as big as possible as young as possible. That does not correlate to a positive eating experience. That’s how we look. We look like our livestock now.

The food writer Michael Pollan wrote about a decade ago: "Eat food. Not too much. Mostly plants." Has anything really changed that would alter that advice?

It’s good advice. What I would say is you can’t expect people to eat food if it doesn’t taste good. We’ve proven now that it’s very hard to follow good nutritional advice. We need to focus on flavor. We need the right food to taste good again and to be aware how incredibly manipulated the flavor of so much of the food we eat is.