Last night may have been the most brutal episode yet, which is saying a lot 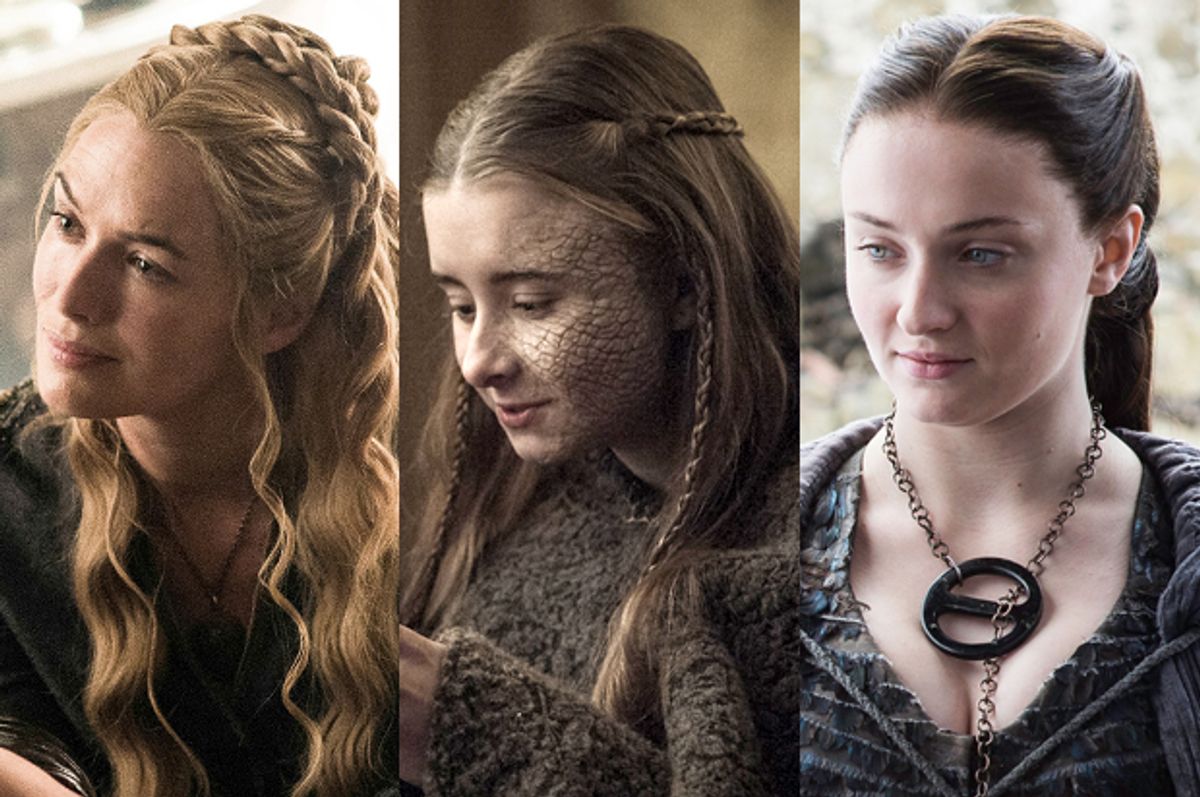 “Game of Thrones” is not a show that makes things easy for viewers. Beloved characters are killed off without warning. Gruesome body horror, amputation, mutilation, dismemberment and decapitation abounds. For some reason, creators D.B. Weiss and David Benioff can't stop writing scenes where consensual sex scenes are rewritten as violent sexual assaults. Television, it's a hell of a drug!

And it seems like the viewing experience has become an increasingly masochistic one throughout the course of the show’s five seasons. Indeed, every few episodes, something so foul and despicable happens that critics and viewers decide that they've had enough with the show's evil machinations (although, funnily enough, they always seem to come back for more). Or, as New York Times TV editor Gilbert Cruz aptly put it:

In honor of last night's particularly trying episode, we've combed five years' worth of critical and fan reactions to find the 10 moments that tested viewers’ endurance the most, in chronological order.

1. Khal Drogo's rape of Daenerys Targaryen, season 1, episode 1
Over the seasons, "Game of Thrones,” would come under fire for its liberal reliance on rape as a plot device, particularly because Weiss and Benioff often wrote rape scenes into the show where they didn't exist in the books. The first time we see a woman suffer a brutal sexual assault on-screen is in the pilot, when Khal Drogo flips over his newly purchased child bride Daenerys Targaeryen and penetrates her as she weeps.

As our own Sonia Saraiya wrote in her seminal "Rape of Thrones" piece at the A.V. Club, "It’s hard to shake the idea that Game Of Thrones, the show, doesn’t see a problem with pushing a scene from complicated, consensual sex to outright rape. It would be easier to accept that idea if it were clear what the show was trying to do with those changes."

2. Ned Stark’s death, season 1, episode 9
The shocking beheading of the show’s erstwhile protagonist was the first time that fans truly realized what a blood bath they were in for, and that nobody, not even the most beloved character was safe from George R.R. Martin’s murderous inclinations (valar morgulis, right?).

While other shows have killed off their main characters, few have done so with such brazenness and frequency. As James Hibberd wrote in EW at the time, "With the show’s ninth hour taking the unprecedented step of killing off a drama series’ main character (and its best known actor) in the first season, some fans are threatening to never watch the program again."

3. Ramsay’s torture of Theon, season 3, episode 7
Ramsay’s torture of Theon was perhaps the show’s most intolerable subplot, a cavalcade of horrors that culminated in Ramsay castrating the former prince of the Iron Islands and turning him into a sniveling shell of a man. While we may not exactly love Theon, the mercilessness of his fate -- and the relentless tediousness of his arc -- tried viewers' endurance perhaps more than any other.

As Christopher Orr wrote over at the Atlantic, "It seems Benioff and Weiss are committed to dragging out this particular storyline—which occurs offstage in Martin's novel, and is mentioned in just a few sentences—as long as they can, perhaps by featuring the removal of a new organ with each installment. (This week, ladies and gentlemen: the pancreas!) What a waste. This may finally have wrested the hard-won title of worst scene in the series from the I invoke sumai! encounter at the gates of Qarth in Season Two."

4. The Red Wedding, season 3, episode 9
Easily the most brutal scene of the books, in which two of the show’s most beloved characters are violently slaughtered in a horrific and unexpected blood bath, was every bit as painful and shocking when translated on-screen. The vividly gruesome visuals of the scene -- from attaching the wolf’s head to Robb’s body to repeatedly stabbing Talisa in her pregnant belly -- were enough to test the endurance even of those who already knew what was coming.

As Martin told BuzzFeed before the scene aired: “Like the fans, I’m looking forward to it with anticipation and a certain amount of dread. And also I’m living in terror of the reaction. When that book came out, I got some amazing letters from people telling how they threw the book into the fireplace and they would never read me again and they hated me. But then they went out the next week and bought another copy of the book, and they love me now. We may get some similar reactions. I don’t recommend anyone throw their television set into the fireplace. It could be very dangerous.”

5. The Purple Wedding, season 4, episode 2
While Joffrey was hardly a beloved character like Ned or Robb, the boy king's death by poisoning — face contorted, eyes bulging, veins popping and blood streaming — was still a shock, both because of how visceral it was and for the conflicting emotions it induced at the viewer. Is this really how low the show has brought us, to the point that we rejoice in the death of a 13-year-old?

As Slate's Willa Paskin writes, "His corpse is so pathetic, it suddenly seems untoward that it could have been the repository of so much hate. In death, for the first time in a long while, Joffrey looks like what he is: a kid. Even the well-earned death of a sadistic, sniveling little shit doesn’t feel particularly cathartic or satisfying."

6. Jaime rapes Cersei in front of their dead son's corpse, season 4, episode 3
Jaime’s rape of Cersei after Joffrey’s death was one of the most outrage-provoking moments of the show so far, because, like the Daenerys-Khal Drogo scene from the pilot, Weiss and Benioff decided to write what was an (at least debatably) consensual sex scene in the books and turned it into a nonconsensual one, and the director and cast's justification for the scene wasn't exactly satisfying.

As Margaret Lyons writes in Vulture: "Last night's rape scene, in which Jaime assaults his sister Cersei inches away from their dead son's body, is a new low for the deeply violent series, because the scene was rewritten from the book to recast the sex as not consensual, and yet the show's cast and crew aren't even sure whether it constitutes rape. 'It becomes consensual by the end,' director Alex Graves tells us ... To the question of whether this encounter constitutes rape, Coster-Waldau says 'yes and no.' Were we watching different shows? The scene is unambiguously a rape scene, and to suggest otherwise is distressing: How can anyone possibly think this is what consent looks like?"

7. The Mountain kills Oberyn Martell, season 4, episode 8
The grisly death of Oberyn Martell was devastating for so many reasons: The fact that it snuck up on us at the last minute, the shocking way it went down (namely, having his eyes gouged out and his head squelched like a piece of ripe fruit), and the fact that Oberyn was one of the most heroic and beloved characters since Ned Stark, one of the few forces for good in a world full of baddies.

Considering everything viewers have gone through so far, it all felt unnecessarily gratuitous and cruel. As Time’s Eric Dodds wrote about the fan backlash, "More so than with any previous death, even those of Ned and Robb Stark, fans were indignant: Was Martin simply being cruel? Was cruelty itself the point?"

8. The rape of Sansa, season 5, episode 6
You might be sensing a pattern by now. Perhaps even more so than the previous sexual assault scenes, the rape of Sansa by her new husband Ramsay Bolton, as Theon was forced to watch, felt gratuitous, unnecessary and unfair.

Discussing the traumatic scene, our own Libby Hill writes: "This isn’t the first time that “Game of Thrones” has gone to the rape well and it won’t be the last. However, what really makes the wedding night rape of Sansa Stark notable is the fact that as brutal and honestly unnecessary as the moment is, the show doesn’t even have the courtesy of letting Sansa’s emotions about the event serve as the center of the moment. Instead, it’s Theon’s face we see crumple and weep as he’s forced to bear witness when Ramsay has his way with his new wife. It’s fine that Theon is upset. I’m upset at being forced to watch that scene, too. But I’m mostly upset because the show seems to have very little interest in how Sansa might be feeling about the nightmarish way her wedding night proceeded."

9. Stannis’ sacrifice of Shireen, season 5, episode 9
Welp — turns out Stannis is not the Mannis we (OK, I) thought he was, and the Internet is not happy with him about it. Stannis’ merciless burning alive of his daughter Shireen, on last night’s episode might have been the most gut-wrenching, dark and disturbing scene in a show full of horrors. D.B. Weiss defended the scene to EW, saying "it was supposed to be awful." But that's hardly a consolation for viewers. As Hill writes bleakly in this week's Salon recap, Shireen was "a paragon for all things good and loyal and sweet” within the show, and while "it makes sense to weep for Shireen Baratheon ... to do so would be an exercise in futility. Because Shireen Baratheon was a girl and there is nothing in Westeros or beyond that holds as much value while simultaneously being so completely worthless."

10. The parade of young prostitutes, season 5, episode 9
"Game of Thrones'" treatment of sex workers has always been particularly hard to stomach, and last night managed to lower the bar yet again. While Shireen’s death was easily the worst part of last night’s episode, it wasn’t the only time where we saw how vicious life is for young girls in Westeros (calling back to Cersei's ominous remarks from season 4: "All over the world, they hurt little girls." The scene from last night in which the pedophilic Ser Meryn Trant enters a brothel and a series of increasingly young girls walks out, all deemed "too old," is just one more moral hurdle for viewers to endure.

As Natalie Bochenski writes in the Sydney Morning Herald, "His parade of prostitutes actually made me feel physically ill, and when the madam pushed the unsuspecting servant girl - clearly no professional sex worker - in front of him, I retched a little. This is where 'Game of Thrones' gets you, right in the bile ducts, right in the gag reflex. This kind of transaction is the one that we all know is happening in the grimy corners of our own dark, ethically bankrupt world. It is not a fantastical one we can distance ourselves from, like the zombies at Hardhome or the dragons at Meereen."

Other contenders:
-The murder of Sansa's direwolf, Lady
-When Joffrey tortured two prostitutes and murdered poor Ros
-When Viserys was killed with a "crown" of gold
-Tyrion’s murder of Shae and Tywin
-Ygritte dies in Jon's arms
-Renly’s death via shadow-baby
-Lysa Arryn breastfeeding her way-too-old son Robin
-The horrifying siege at Craster's keep
-When Jaime pushed Brann out of a window
-When Daenerys ate a horse heart and proved that she would be really good on “Fear Factor"

Can you think of any other moments that made you want to smash your TV against the wall and/or curl up into a ball weeping/renounce all violent prestige dramas in favor of a TV diet consisting solely of "Boy Meets World" reruns? Leave them in the comments!