From black chicken to burnt toast powder: Your foodie trends come straight from the Guy Fieris of reality TV

When hot new ingredients are featured on shows like "The Next Food Network Star," industry buyers know to stock up 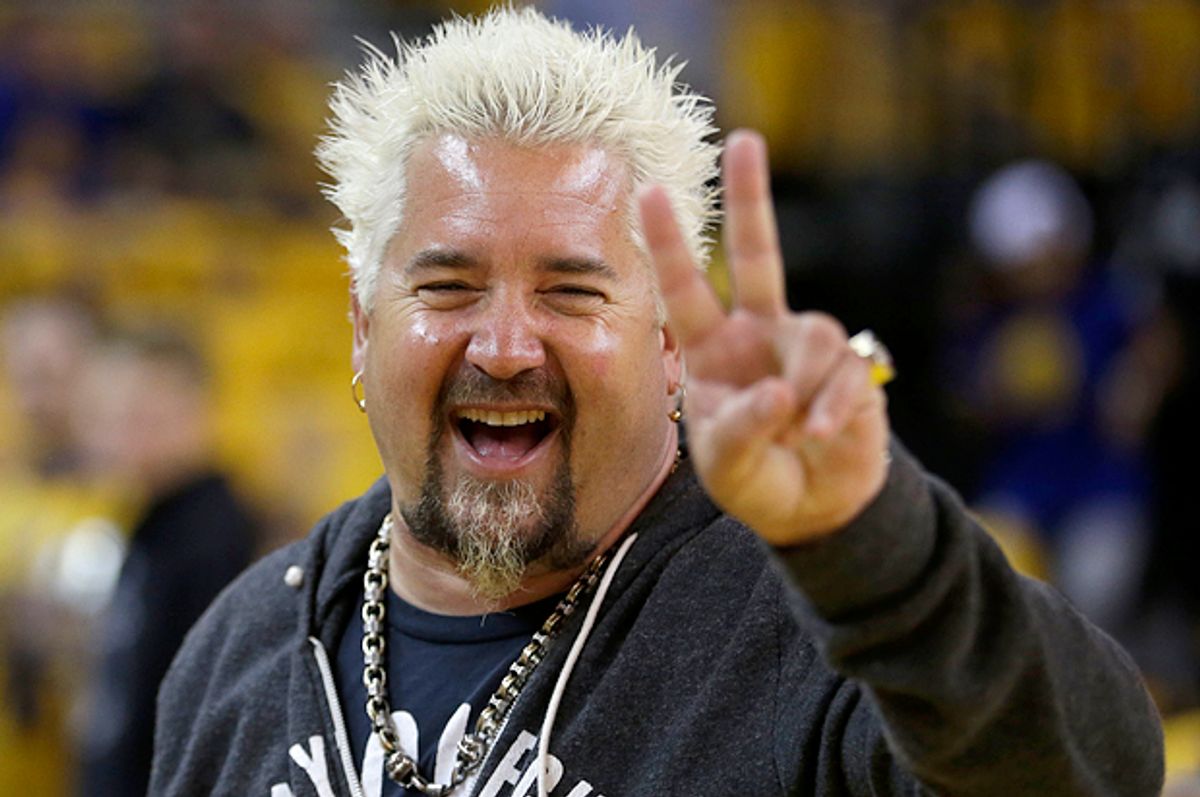 After Silkie chicken meat was featured on both "Top Chef" and "Chopped," the internet went insane with tabloid-esque surveys of the dark protein: “Does black chicken intrigue or scare you?” and “Forget Black Burgers, Goth Chickens are a Thing,” and “What’s the Deal with Black Chickens?”

What once had been an ingredient that was only found propped behind the counter of Asian specialty markets, became part of food enthusiasts’ vernacular.

A Google trend report shows the search term “black chicken” climbing steadily upward since 2007 — the year in which it was featured on "Top Chef" — with the query frequency of the U.S. falling in second place, smack between Singapore and Malaysia. And while not necessarily as easily procured as trendy powerhouse foods like kale or quinoa, Silkie chicken had its moment in the spotlight as a “superfood” after Science Daily took a look at the chemistry behind the bird’s 1,000-year-old reputation as a marvel of Chinese medicine.

But this goes beyond the so-called goth chicken getting its 15 minutes of fame. While food trends are inevitably bubbling below the surface long before they hit Bravo and TLC, once they flash on screen, people are hooked — either in consumption or imitation. Think "Cupcake Wars" and "The Great Food Truck Race" and the plethora of sweets shops and mobile eateries that followed.

Are we all just lemmings absorbed in whatever semi-aspirational reality Bravo and TLC serve us? Well, yes — especially when it comes to novelty ingredients that we wouldn’t otherwise try, or which have previously escaped notice.

Long story short: our kale fascination is no accident, and it’s traceable from restaurant kitchens to cable television to our Instagram feeds.

“Reality shows can both push and pull on trends.  It can either spark the interest in an ingredient or truly drive the point home on an ingredient that is beginning to gain momentum,” said Rob Bleifer, a Food Network test kitchen chef and an instructor at the International Culinary Institute.

Bleifer makes it clear that this phenomenon has its perks. “Food TV in general has created a massive spike in people wanting to cook and getting back in touch with food — we had an entire generation that sadly moved far away from food with family recipes getting lost,” he said. “Reality competition shows have further spiked interest in cooking at home.  This is the spike that is getting people to really experiment with unfamiliar ingredients and dishes they would normally never try to make.”

In decades past — prior to “eatertainment” — food trends were kindled by a select few: the Julia Childs, Martha Stewarts and Gourmet food writers of the world. And in a way, that’s still true. David Moore, president of  the special ingredient importer Woodland Foods, said in a 2013 Food Business News interview that “a trend can’t happen unless certain things occur. There has to be a qualified evangelist or respected person talking about how good this is to get things rolling. Specifically, a celebrity chef or a restaurant group.”

Today, there are celebrity chefs aplenty to preach an item’s culinary trendiness, but with the rise of foodie-fueled social media — #foodstagram, #foodporn and the like — the playing field has leveled, allowing home cooks and food bloggers to at least feel they have a part in rise and fall of in-vogue ingredients, thereby including them as a part of the cycle of conspicuous consumption seemingly inherent to bougie food culture nowadays.

Food’s status as a luxury item isn’t new, however, the way in which it is displayed is increasingly virtual. In knowing what the “it” foods are and documenting your trendy picks, you’re on your way to establishing yourself as, in the words Time writer Josh Ozersky, a “gastrocrat” — or at least feel part of the foodie elite. And it’s not just ingredient trends that are shaped by these shows, either. Before searching for the hashtag #topchefinspired on Instagram, I’d never seen so many indistinctly-shaped smears of sauce in my entire life.

Again, these food trends are pioneered by restaurant chefs (and arguably they originate with home cooks and street vendors) long before they make it to prime time, but once they do, jumping onboard is a quick way to up your Insta-game. Maybe it’s simply a way to incentivize people into gathering around the family table? Perhaps. Vapid? A little. But I’d rather see photos of duck confit than duckface. Not to mention, networks keep track of of social trends in order to satiate our hunger for food fads. Example: the 926 kale recipes stocked up at Foodnetwork.com.

A current example of the next big thing is the growing obsession with Filipino food (and with good reason, it’s one of the most delicious cuisines). In 2012, TV chefs Andrew Zimmern and Anthony Bourdain both broadcasted their love for the flavors of the Philippines. Then at the Food Network New York City Food and Wine Festival in October 2014, Zimmern waxed poetic about the current  “incredible love affair with Filipino food,” which he predicted will be the next big trend. The precursors to his declarations seem to stem from going to both the Philippines and San Diego to eat authentic (or authentically prepared) Filipino cuisine on his show “Bizarre Eats.”

Obviously, in addition from its delectable flavor, there are precursors aside from celebrity endorsement that have affected the spike in attention to the cuisine’s popularity. Manila-born chef Paul Qui, who was also the Top Chef Season 9 winner, was given the nod by Esquire as Chef of the Year; and since 2012 the Filipino Food Movement has been working to “mainstream Filipino Cuisine in North America and around the world.”

Yet Zimmern seems keenly aware of how his star-chef status affects food trends: “I think what’s going to happen—just like with everything—is we’ll go around the world and took a look at the things people haven’t seen before and haven’t fetishized yet. And then we'll fetishize. People to blame are folks like me who run around the world, holding up foods and saying, ‘Hey, fetishize this!'”

This formula — seek, find and televise (and wait for people to pick up the appropriate hashtag) — obviously works for food TV producers, as Bravo is launching a new culinary competition called "Recipe for Deception."

According to Eater: "In each episode, four new chefs must create a dish featuring a main ingredient, however, they do not know what that ingredient is. So they must ask their fellow competitors three "yes or no" questions to determine their ingredient. Since the show is based off of the game "Two Truths and a Lie," the opponent must answer the questions with two truthful responses and "one outright lie." Comedian and Eater's former Top Chef recapper Max Silvestri — who starred on FYI's show ‘The Feed’ — will serve as host. There is no information regarding a premiere date yet."

Food Network has also made an entire show out of the process of cultivating talent, who in turn will clue viewers into the next upcoming food trend. Season 11 of "The Next Food Network Star," a show in which food TV hopefuls compete for a chance to host their own Food Network series, premiered yesterday. Past winners have included Guy Fieri, host of "Diners, Drive-Ins and Dives"; Aarti Sequeira, who provided a much-needed take on Indian cuisine; and Damaris Phillips, whose “modern Southern cooking” perspective was apart of a nationwide trend of reimagining classic American dishes.

The show runs for 11 weeks, so it won’t be until late summer that we’re graced with new star-power to influence our culinary decisions. In the meantime, want to get ahead of the trends? Some standouts from Food Network’s 2015 food trends predictions include burnt toast powder as a spice, pomegranate molasses, kimchi and “ice-cream cookbooks galore.”