"Game of Thrones" politics: "What great thing has ever been accomplished without killing or cruelty?"

Human sacrifices were the price of destiny last night — but what if they aren't enough? 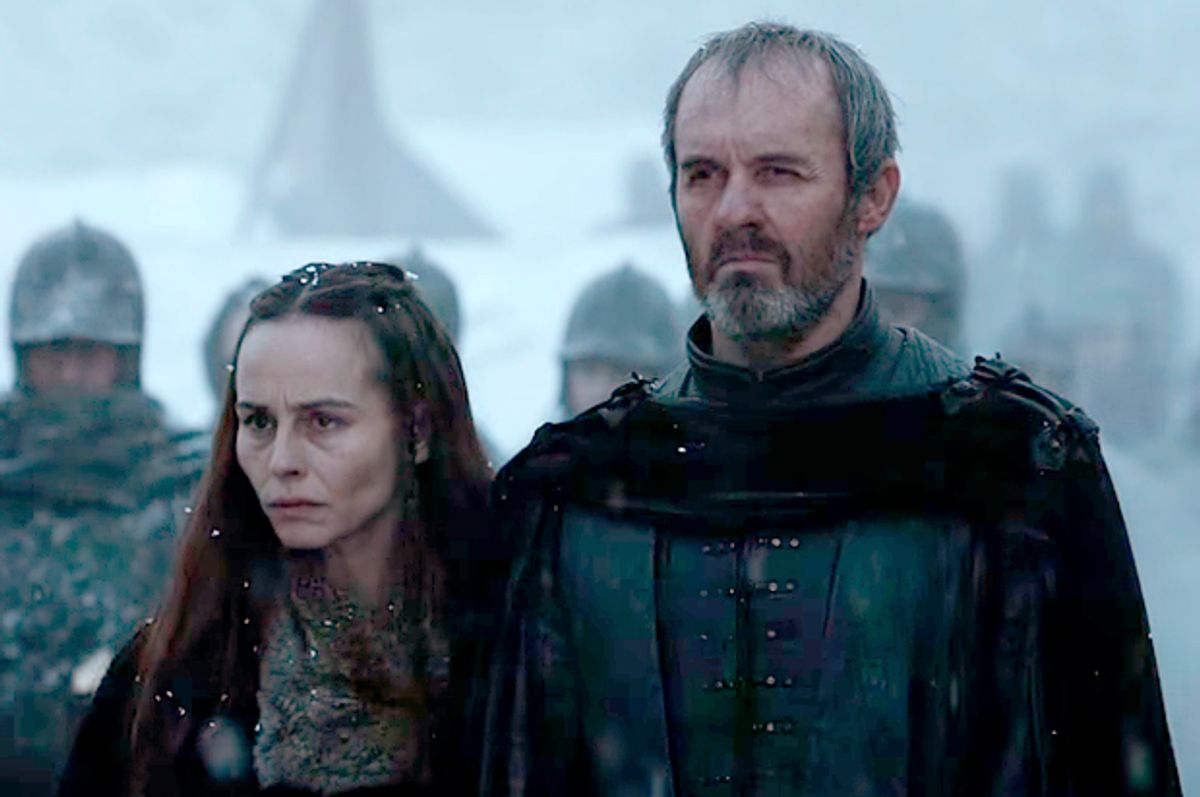 From the very moment that Shireen Baratheon was led to the pyre, the condemnation of the internet was as hot as the flames itself. How could anyone, let alone “Stannis the Mannis” sacrifice their child to the gods? However, for people who’ve been paying attention to the development of this storyline throughout Season 5, the writing has been on the wall for a while now.

And according to David Benioff, this is the endgame that George R.R Martin has envisioned:

“It’s obviously the hardest choice he’s had in his life, and what it comes down to is just ambition versus familial love. And for Stannis, sadly, that choice is ambition. When George first told us about this, it was one of those moments where I remember looking at Dan and was just like, “God that’s so horrible and so good in the story sense because it all comes together.” From the beginning, from the very first time we saw Stannis and Melisandre, they were sacrificing people, they were burning people alive on the beaches of Dragonstone […] And it all leads ultimately, fatally to Shireen’s sacrifice.”

If this quote is close to accurate, I think what GRRM will be exploring in his forthcoming book in the series, "The Winds of Winter," isn’t just the question of what do you do when the gods demand the death of your child — whether it’s Abraham binding his son to the altar on Mount Moriah or Agamemnon giving his daughter to satisfy the wroth of Artemis and fulfill the will of Zeus — but why. In Season 3, Stannis was offered personal power for the life of his nephew, at a moment where he had other options, other paths open to him. The purpose of Ramsay’s raid destroying Stannis’ supplies, of the Northern winter that has arrived overnight after being held in abeyance for four seasons, is to take away his options, to ensure that if Stannis doesn’t do this, he, his wife, his daughter, and  his entire army starve to death in the snows, leaving the North in the hands of the Boltons and the Night’s Watch without allies or dragonglass when the army of the dead marches against the Wall.

So I think it’s profoundly mistaken to conclude that Stannis is an evil man, or that Melisandre is the clichéd witch figure so many take her for. There’s a reason why GRRM has explicitly stated that Stannis is a righteous man and that Melisandre is the most misunderstood person in the series. If Stannis was truly evil, there would be no torment and resignation in his voice when he says – to a daughter who has innocently pledged to do anything necessary to help him: "Sometimes the world forces his hand. If a man knows who he is and remains true to himself, the choice is no choice at all. He must fulfill his destiny and become who he is meant to be. However much he may hate it."

Stannis does not act here out of sadism, and contrary to Mr. Benioff, I don’t think it’s ambition either. Rather, Stannis truly believes that he is destined to save humanity (as opposed to sitting the Iron Throne). And Melisandre, as revealed in her POV chapters from "A Dance With Dragons," genuinely and sincerely shares that belief; of all her many illusions and deceptions, this isn’t one of them.

And what’s genuinely troubling is that they might not be wrong.

As I have said before, sacrifice is one of those moments that brings into sharpest relief the difference between the modern (or postmodern) and the premodern mindset.  Despite the cultural ubiquity of human sacrifice, despite the way that it’s woven in to so many cultures and religions from the shores of Hawaii to the imperial palaces of China and everywhere in between, the reaction tonight shows that here and now, we consider it abhorrent. But we consider it abhorrent, in no small part, because we don’t believe it works. Our ancestors considered it permissible because they believed it did. And if the previews for next week are accurate, then in Westeros, the ancestors seem to be in the right. The fires of R’hllor seem to have burnt away the Northern winter, and allows Stannis to put Winterfell under siege.

But if Stannis triumphs at Winterfell, if the Boltons are pulled down and some justice from the Red Wedding is done at long last, what if Stannis finds out that the price he paid to win a battle is not the price that has to be paid to save humanity? What if he is not the Lord of Light’s chosen after all?

Over in Meereen, another quixotic crusade comes to a crashing conclusion. From the very beginning of the season, Daenerys Targaryen has attempted to defy the laws of political physics by pursuing revolution and reconciliation at the same time. This effort to reconcile the Great Masters of Meereen to her reign has led her ultimately to the Great Games that were supposed to bring the ex-slaves and ex-masters together in their mutual love of another form of human sacrifice. And yet, for all of Hizdahr zo Loraq’s promises, the Sons of the Harpy cannot be reconciled to the new order — dying like lemmings, they burst out of the crowd in a suicidal mission to eliminate the invader, although they only succeed in killing Hizdahr (was this a double-cross against their leader, who was late to the games as he made “sure everything’s in order,” or proof that the Sons have no leader?).

But before the killing starts, we get the philosophical equivalent of the final clash between Dany and the Sons of the Harpy. In an attempt to quell Tyrion and Dany’s distaste at blood sport, Hizdahr asks “what great thing has ever been accomplished without killing or cruelty?” — a question which echoes Stannis’ dilemma in the snows outside Winterfell - and argues that the individual lives lost are worthwhile in bringing unity to the “great city of Meereen, which existed long before you or I, and will remain standing long after we have returned to the dirt.” Tyrion, who has been uncharacteristically arguing for “what ought to be” against “what is” especially when the status quo puts the defender of the status quo up in the stands rather than on the killing floor, only ironically points to Tywin Lannister’s obsession with legacy as a nod to the dehumanizing consequences of this line of thought.

Dany goes one step further, pointing out that if she wants it to happen for the greater good, “your great city will return to the dirt” as well. Hizdahr challenges this, equating the violence that Dany demonstrably brings in her wake with the violence of the pits, and ultimately of slavery. In the end, what distinguishes revolution from oppression, according to Hizdahr is whether “your reasons and true and theirs are false.” It’s a hard question, because it makes Dany face up to whether she’s confident enough in her reasons to become a butcher. But it also points out the essential bankruptness of the fighting pits as a political strategy – just as the crowd is not won over when the Westerosi knight defeats the Meereenese champion, showing that bread and circuses can’t paper over some divides, the Great Masters of Meereen will ultimately insist on Dany either adopting their world view or dying.

In the end, the only thing that cows the Sons of the Harpy, and delights the audience, is the miraculous arrival of Drogon. Even before he roasts them and devours them by turns, barely seeming to notice their spears, the sound of his roar and the shadow of his wings brings total silence to Draznak’s Pit. And once again, we have a young woman facing a fiery sacrifice, as Dany steps forward to once again make contact with her prodigal child. This time, however, the grace of the gods intervenes, and Dany makes the breakthrough that has been eluding her for the better part of two seasons — her outstretched hand is met by recognition, she climbs onto Drogon’s back, and her flight out of Meereen is transcendent.

The term deus ex machina is used today as a perjorative, a sign of bad writing. But in its original context, classical Greek theater, it was a device with a purpose. In Aeschylus’ "Eumenides," Orestes is driven to the point of death, tormented for having killed his mother as revenge for the murder of his father — Apollo and Athena literally descend from the heavens to shield him from the vengeful Furies. Medea escapes a vengeful Jason and all blame for having murdered her own children, as the sun god Helios lifts her into the heavens on her chariot. If you’re looking for a moral through-line here, you won’t find it. The whole point, for the Greeks, was to emphasize that the gods, like fate, were not bound by morality or human conceptions of justice.

Throughout this season, Dany has looked to human conceptions of justice — revolution and reconciliation, punishment and mercy — to try to guide her as a ruler, and they have all failed her. It is only by going beyond the level of humanity — into prophecy and the supernatural — that Dany will find her path.