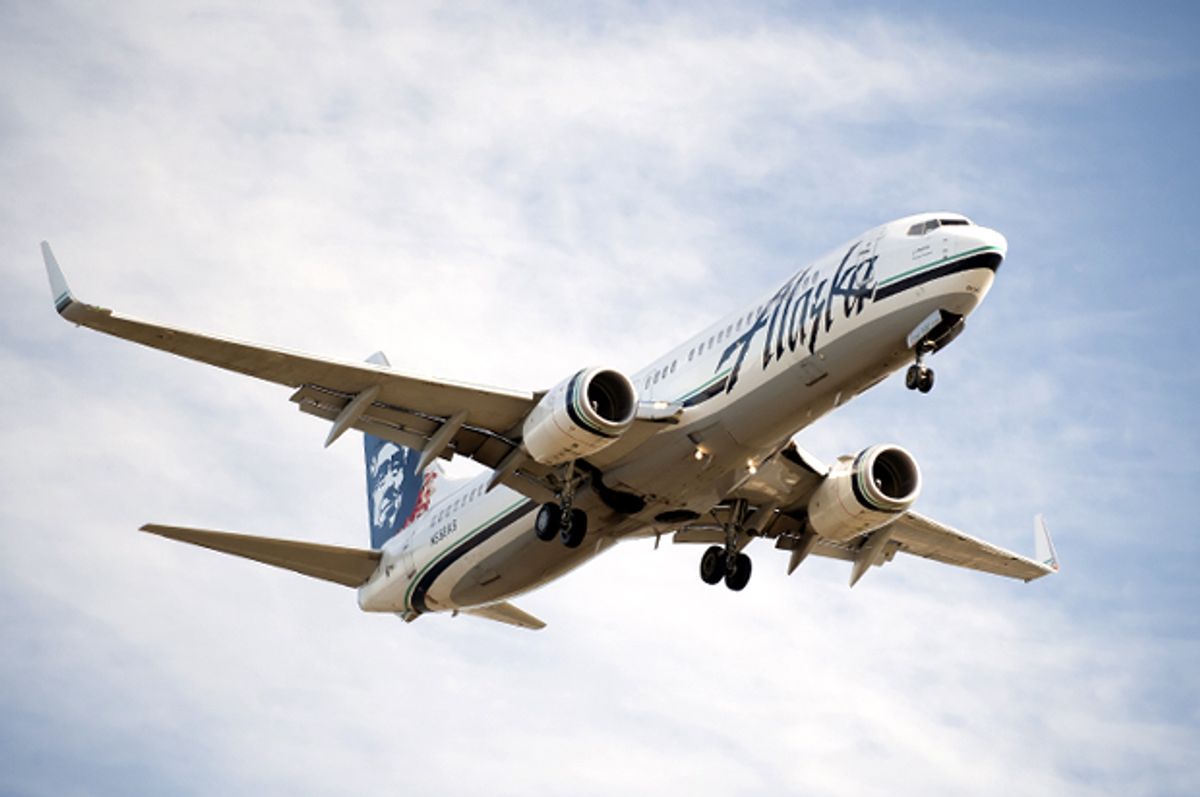 Aside from the fact that it's always lovely to see a nice gesture of inclusion and support, it's just fun when a business does anything that gives Internet cranks the chance to rail about so-called "discrimination for straights." So thanks, Alaska Airlines, for the travel discounts -- and for the bonus opportunities to chortle at the people on Twitter musing that they "DON'T KNOW HOW LONG GOD'S PATIENCE WILL CONTINUE" and suggesting travelers "Sue them for discrimination, turnabout is fair play."

The airline, which recently received a perfect score on the 2015 Corporate Equality Index, "a national benchmarking survey and report on corporate policies and practices related to Lesbian, Gay, Bisexual and Transgendered workplace equality, administered by the Human Rights Campaign Foundation (HRC)," describes itself as a company made of "supporters of the LGBT community… committed to a more equitable society." To that end, it is currently highlighting destinations that "support marriage equality, Pride celebrations, and other things of interest to the LGBT community," and offering discounts of between 7% and 10% for travelers going to select cities during their pride celebrations, as well as "fantastic vacation spots, and wedding destinations."

Naturally, the Daily Caller describes the promotion as "discounts for gay people" and notes, "One image on the page feature a trio of shirtless dudes standing under some palm trees. Another shows two women nearly embracing while drinking coffee. A third shows a couple of happy men wearing snazzy denim and holding fancy glasses of alcohol." It all sounds very incriminating, what with the "snazzy denim" and all.

To its credit, the story then backpedals a little bit and admits, "Being gay is not a requirement for purchasing airfare to these exciting gay pride parade and gay cruise destinations on the weekends when the events occur."

On Free Republic, expectedly, there are a handful of users currently losing it over "Giving discounts to sexual deviants." There's some theorizing that "It also sounds like there might be some extortion going on" and complaining the airline is "pandering to the minority" because "they cater to homos."

And of course, on Facebook, a segment of irate would-be travelers are now saying, "My wife and I would like our discounts also! While your [sic] trying to be politically correct we are proud heterosexuals," and accusing, "So everyone has their own little special rates depending on who you happen to be? That is what most call profiling." I've got to hand it to whomever is doing their social media, for patiently replying to these clowns and explaining that "The discount is open to anyone."

It's not the airline's first brush with this type of complaining. Eight years ago, Alaska Airlines upset the folks at the ever-eager for a conspiracy WorldNetDaily by offering a promotional "gaytravel/LGBT-NYC-Sale," or what WND called "a 10 percent surcharge for these destinations on travelers who are sexually normal." It's like being penalized! For being straight! Where are the airline discounts for trips to straight destinations? Also what are they? Do they involve barbecue or the cast of "Entourage?" I'm asking.

Crazy as this may sound, an advantage for one group is not an automatic exclusion of others. On the contrary — advancement tends to be great for everybody. And it's pretty cool when a business thinks outside the hetero-as-default box and does what a business is supposed to do: serves its customers where there is demand. Here's the other thing: Imagine a situation where one group is entitled to exactly the same perks another is. Sounds pretty fair, doesn't it? That's because it is. You don't have to be gay to use a gay-friendly discount. And in case you hadn't noticed yet, there's room in the sky for everybody to soar.