On issue after issue, Clinton's making the right call. Maybe it's time for the media (and progressives) to believe 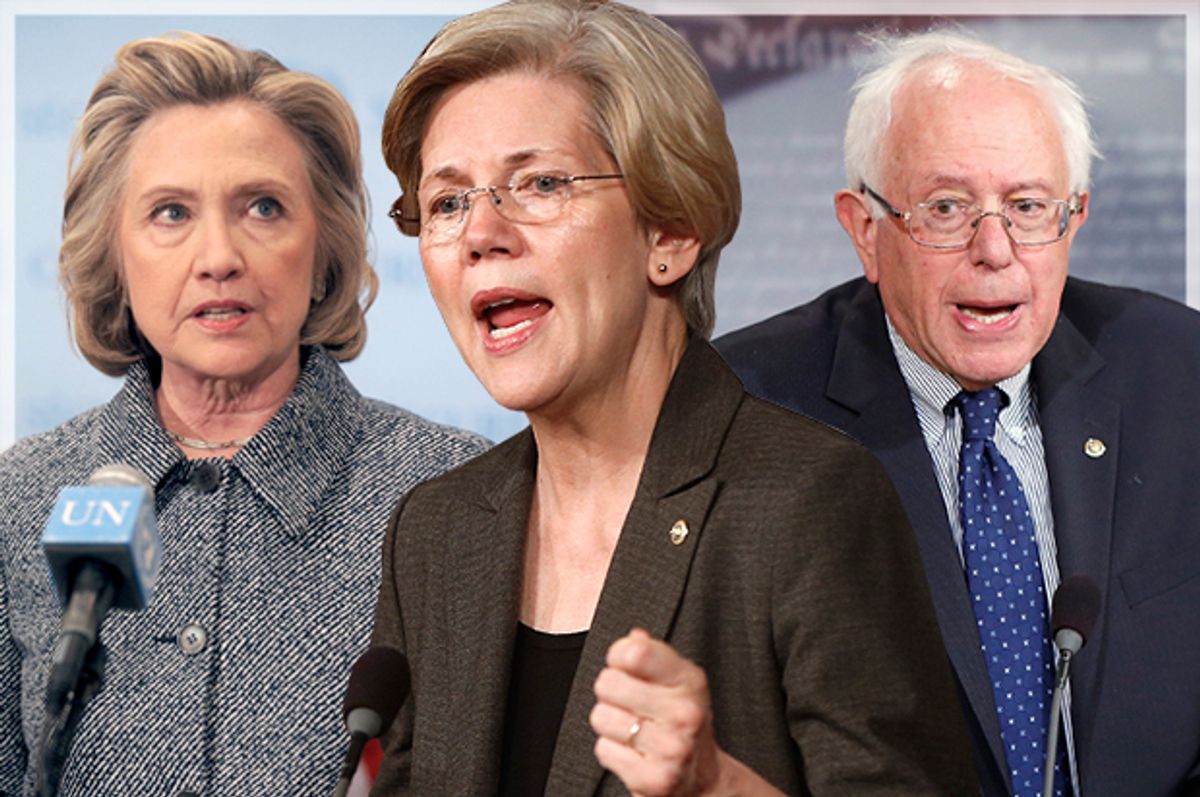 Hillary Clinton's campaign rollout so far has taken many people by surprise. All the silly folderol about emails and her unwillingness to talk to the press aside, what seems to have many reeling is the list of rather shockingly liberal agenda items she's announced and the decidedly populist approach she's taken to solving them. Apparently most observers thought she would run as if it were 1992 and the long-disbanded Democratic Leadership Council was in its heyday. But you have to admit that even by comparison to her run in 2008, she it taking a much more aggressively progressive stance on a number of issues from immigration to criminal justice reform to voting rights that just a short while ago would have been seen to be dangerous ground for a Democratic candidate for president.

For decades Democrats tried to finesse thorny racial issues (which is what many of those issues named above subconsciously relate to) while still being seen as the party friendly to racial minorities. It hasn't bought them a white Southern vote in a national election in decades. It was always a fool's errand but it took the victory of an African American president to finally show the party how to win without them.

And Clinton, not being a fool, can see that quite clearly as well. But she doesn't seem to arrogantly believe that the coalition that elected President Obama twice should be taken for granted -- and good for her. It shouldn't be and if the Democratic party expects to win presidential elections it has an obligation to put the needs of those voters above the prejudices of voters who will never vote for them anyway. It's hard to believe they ever thought that was a winning strategy in the first place.

But it's still amusing for some of us who lived through the Clinton administration years to see people blinking in amazement that Hillary Clinton would be running for president on what looks so far to be a pretty liberal platform. After all, in the '90s it was widely believed that she was the evil Rasputin whispering Marxist feminist theory in poor Bill's ear every night. Her "liberal feminist" image in Arkansas had been a subject of endless gossip and criticism for years but conservative columnist Paul Gigot in the Wall Street Journal got the ball rolling in the national press when he dredged up some of her early academic work and famously called her an "ardent liberal and feminist" in the spring of 1992. The social conservatives went nuts, with Christian Right leaders like Gary Bauer claiming that Clinton had a radical philosophy that would "rip the heart out of any family." At the Republican Convention Pat Buchanan famously roared:

Elect me, and you get "two for the price of one," Mr. Clinton says of his lawyer-spouse. And what -- And what does Hillary believe? Well, Hillary believes that 12-year-olds should have the right to sue their parents. And Hillary has compared marriage and the family, as institutions, to slavery and life on an Indian reservation. Well, speak for yourself, Hillary.

There have been many books and articles written about all this so there's no need to rehash it all now. Suffice to say it was probably a lot more complicated than any of that and so is Hillary Clinton. In the intervening years her image morphed into one of a centrist largely, I believe, on the basis of her monumental error in voting for the Iraq war. (According to the Poole and Rosenthal DW-Nominate analysis her Senate record placed her at 11th most liberal out of a hundred. Joe Biden, by comparison was number 33 and Bernie Sanders No. 1 in the same period.) It's probably enough to simply say that Clinton is a mainstream Democrat and leave it at that. People will decide whether or not that's sufficient when they go to the voting booth.

It is, nonetheless, interesting to ponder why so many liberals are convinced that the person who was once seen as a hard core liberal feminist is now widely assumed to be a middle-of-the-road centrist. Brian Beutler tackled this subject last week in this piece at The New Republic where he posits that it's because of Bill Clinton's reputation for a political tactic called "triangulation" rather than any specific ideological issues. He wrote:

For the better part of 20 years now, Bill Clinton’s presidency has been synonymous with a hazy political concept called triangulation. Since his advisers made the term famous, it has been used to describe everything from standard-issue compromise, to the willingness to confront reactionary elements in one’s own party (think Sister Souljah), to the appropriation of another political party’s policy ideas. The latter is as close to a proper definition as there is.

One big concern bedeviling progressives is that Hillary Clinton’s candidacy will mark the return of triangulation—the preemptive ceding of ideological turf, at a time when, thanks to partisan polarization, such concessions amount to outright victories for the Republican Party.

Ed Kilgore over at the Washington Monthly took issue with Beutler's definition of triangulation explaining that it was actually something that Clinton critics (and one backstabbing advisor -- Dick Morris) used to describe the administration's approach. I can only say that from the standpoint of an observer from afar, the most vexing aspect of the Clinton administration's approach, whatever you want to call it (and which frustratingly continued in the Obama administration) was the idea that capitulating to Republicans on thorny issues like welfare reform, gun control or abortion would result in "getting them off the table" and lead the public to support liberal programs in the future. This has never happened. When you give Republicans an inch they will take a mile and it only resulted in moving the political center farther and farther right. The good news is that the Republican Party has now fallen off the cliff and it's possible that a majority of the country has finally seen them for what they are. The bad news is that they control the Congress and half the country still votes for them.

Beutler goes on to say that Hillary Clinton's strategy so far seems to indicate that she has adopted a much different approach, presumably based upon the lesson learned in both her husband's and the Obama administrations:

The nature of the strategy involves staking out a variety of progressive issue positions that enjoy broad support, but it’s not as straightforward as simply identifying the public sentiment and riding it to victory. The key is to embrace these objectives in ways that makes standard Republican counterspin completely unresponsive, and thus airs out the substantive core of their ideas: Rather than vie for conservative support by inching rightward, Clinton is instead reorienting liberal ideas in ways that make the Republican policy agenda come into greater focus.

It sounds as though she does not hold the fatuous notion that she can vie for conservative support. Indeed, why would anyone in their right mind think she could? Basically, she's taking popular positions and making the Republicans have to explain why they oppose them. This shouldn't strike anyone as being particularly odd unless you are a Democratic strategist who believes that only a handful of people could ever vote for popular liberal issues.

It appears that she has taken the lesson the Obama administration learned to heart. As advisor Dan Pfeiffer put it to Jonathan Chait as he left the administration:

“There’s very little we can do to change the Republicans’ political situation because they are worried about a cohort of voters who disagree with most of what the president says. We don’t have the ability to communicate with them—we can’t even break into the tight communication circles to convince them that climate change is real. They are talking to people who agree with them, they are listening to news outlets that reinforce that point of view, and the president is probably the person with the least ability to break into that because of the partisan bias there.”

“The incentive structure moves from going after the diminishing middle to motivating the base. Whenever we contemplate bold progressive action, whether that’s the president’s endorsement of marriage equality, or coming out strong on power-plant rules to reduce current pollution, on immigration, on net neutrality, you get a lot of hemming and hawing in advance about what this is going to mean: Is this going to alienate people? Is this going to hurt the president’s approval ratings? What will this mean in red states?” And yet this hesitation has always proved overblown: “There’s never been a time when we’ve taken progressive action and regretted it.”

It will interesting to see if Clinton is able to use those lessons to win a campaign. At this point it appears that the whole Democratic field is doing it, with Bernie Sanders and Martin O'Malley both pulling from the left. And despite the political media's stale logic, there's no reason to assume this will alienate independent voters. Are they going to vote for people who don't believe climate change exists? Or that we should deport immigrants who were brought here as children and know no other country? These votes don't happen in a vacuum.  People have to choose.

And as Dan Pfeiffer himself said on Twitter the other day:

Perhaps one day the political press itself will provide that context in their reporting. We live in hope.