“The Yes Men Are Revolting”: Anti-capitalist pranksters face their own midlife crisis -- and find hope 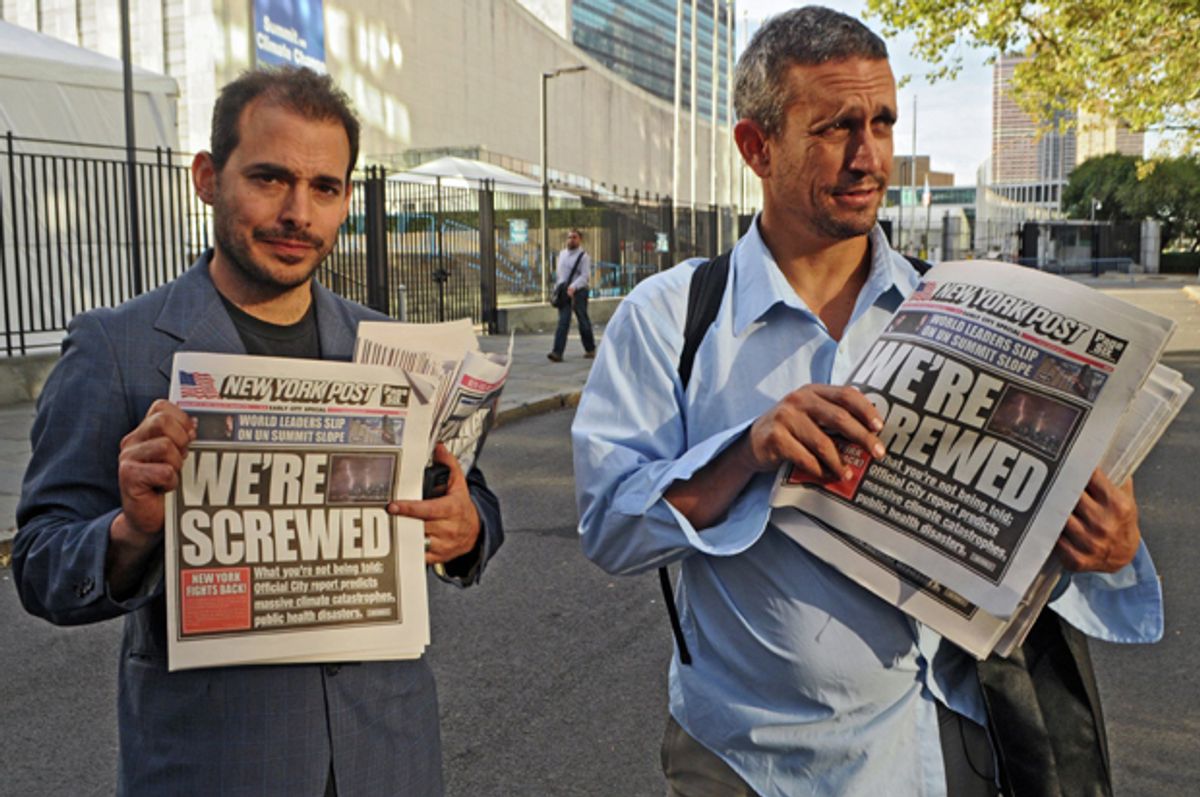 I have nothing but love – well, let’s say almost nothing – for the Yes Men, the pair of activists, performance artists and culture-jammers who have repeatedly proved that it’s impossible to go too far in making fun of capitalist greed. These are the guys who have staged several of the most epic attention-getting pranks in recent political history, including driving down Dow Chemical’s stock price by staging a press conference to announce that Dow was taking full responsibility for the 1984 disaster that killed nearly 4,000 people in Bhopal, India, and would spend up to $12 billion on medical care, environmental cleanup and related research.

As with the Yes Men’s other most effective actions, the key to the Dow ventriloquism lay in stretching plausibility not quite to the breaking point – is it dimly conceivable that a multinational chemical corporation might actually behave like a responsible global citizen? – and also in engaging the latent or defunct moral compass buried within the most cynical mainstream journalist. As we see in their wistful, episodic and occasionally solipsistic new movie, “The Yes Men Are Revolting,” the activists known as Andy Bichlbaum and Mike Bonanno (whose honest-to-God real names turn out to be Jacques Servin and Igor Vamos, respectively) more recently punked the entire Washington press corps into believing that the United States Chamber of Commerce would “go green” and support limits on carbon emissions. (In fact, the chamber subsequently did shift its position on climate change, although not quite to that extent.)

Not every Yes Men stunt pays off in the same way, as their movie (directed by the Yes Men and Laura Nix) disarmingly reveals. Andy and Mike’s brilliant scheme to donate a “polar bear” to the Amsterdam zoo, on behalf of an Arctic drilling partnership between Shell and the Russian company Gazprom, comes off like a failed high school prank, which is always an inherent danger with these guys. I’m not sure anybody bought the 2006 Yes Men announcement that the WTO would reintroduce slavery in Africa, rebranded as “full private stewardry of labor,” or ExxonMobil’s 2007 plan to develop “Vivoleum,” crude oil made from the flesh of people who died because of climate change. (I’m also not sure those were in acceptable taste.) And their supposed Halliburton product called the SurvivaBall – “designed to protect the corporate manager no matter what Mother Nature throws his or her way” – well, OK, that actually did fool people at first. And then Andy and Mike proceeded to beat the joke to death, well past the point of Dada or absurdism into pure silliness.

The great strength and great weakness of the Yes Men, not to put too fine a point on it, is that they’re a couple of dorks. Their props, costumes and supporting materials are invariably crude – but they are sincere and unafraid, or at least unafraid enough to brazen it out. In the contemporary media universe those qualities can take you a long way. They exploit the audience’s willingness to suspend its disbelief, which is an especially strong impulse among supposedly savvy or sophisticated audiences. When you see Andy wiggling himself into a ridiculous wig to pose as U.S. Energy Secretary Ernest Moniz, toward the end of “The Yes Men Are Revolting,” you’re like: How embarrassing! Why would anyone do something so unbelievably dumb? And a couple of hours later he has a bunch of retired military officers, defense contractors and lobbyists doing a bogus “Native American circle dance” to celebrate a fictitious new government plan to convert the U.S. economy to 100 percent renewable energy by 2030. (A plan that would in fact produce millions of jobs, lower healthcare costs and set us free from foreign oil, to say nothing of the effects on global climate.) Mike wore the stupid wig but did not actually pretend to be Moniz. In case you’re wondering about the representational politics, the circle dance was the work of Tito Ybarra, a comedian and singer from the Ojibwe nation.

That dopey, sweet and surprisingly hopeful spectacle makes the perfect sendoff for a film that sometimes feels shapeless and self-involved but in its best moments tries to engage the Yes Men’s fans in a new and more reflective mode. Tensions between Mike/Vamos, a married heterosexual who is increasingly focused on family life (he even moves to Scotland, his wife’s homeland, for the superior public services), and Andy/Servin, a gay man whose activism gets in the way of steady relationships, come to the fore, and there’s a bit too much “Will the band get back together?” in this film. Still, it’s pretty ballsy for the two of them to confront their passive-aggressive behavior toward each other so directly: Andy apparently never congratulated Mike on the birth of his two kids, and Mike springs the birth of his third sprog on Andy (via Skype) just before the latter is hosting a fake Shell corporate party in Seattle, complete with beer-spewing fake Arctic oil rig.

Aging does take a toll, on anti-capitalist spoofers as on the rest of us, and there are also moments of revelatory courage in “The Yes Men Are Revolting” where you have to thank the pantheon of goddesses for these guys and their bravery. When the duo are invited to Uganda by an intrepid local climate activist -- who will later impersonate a Ugandan government minister in a Yes Men press conference -- Andy realizes he has to come out to his hosts and discuss that nation’s notorious anti-homosexuality laws. It goes OK, all things considered, including his chaste simulation of gay sex involving a pair of beer bottles. And the point of the circle dance at last year’s Homeland Security Conference was not just to make fun of a bunch of suit-wearing defense industry Republicans. In fact, if anything the point was to demonstrate their basic humanity and good intentions: The Yes Men believe, in spite of what we are told all day every day about the nature of American society and politics, that most ordinary people are not stupid or monstrous and can be persuaded to make reasonable choices. It would be great if they were right about that, wouldn’t it? But I’m getting a SurvivaBall just to be on the safe side.