The senator made an idiotic argument against Obamacare yesterday. That doesn't mean it won't work. 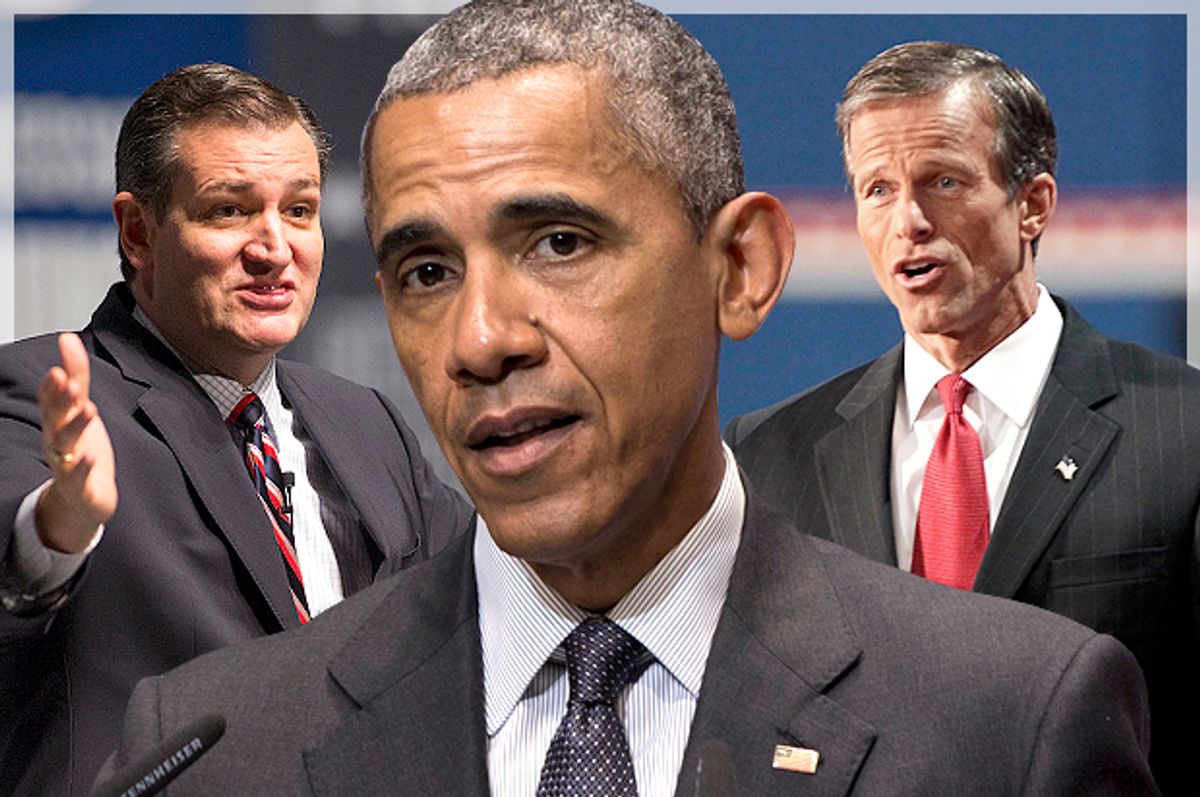 And the award for most dishonest Republican talking point on the pending King v. Burwell decision goes to Sen. John Thune, member of the Republican leadership, alleged lieutenant in the allegedly existing Reasonable Republican Camp, and "tanned (in a prairie, sun-chapped sort of way)" fixture of David Brooks' dreams. Let's give credit to Thune for having the temerity to unleash this flagrantly misleading missive into the public arena. Just kidding, let's not:

Obamacare is such a disastrous law that people might lose their popular Obamacare benefits in a hackish Supreme Court case brought forth by Republicans. Or something like that.

The Thune tweet brought down on the senator a tidal wave of mockery, much of it about how John Thune is an idiot. "A Republican Senator Just Sent Out a Tweet So Stupid Our Child Will Learn About It in Stories," Mother Jones wrote. At Raw Story:"Gop Sen. John Thune shows America that he is a moron using this one weird and dumb tweet." And at Daily Kos, "John Thune makes bid for America's Dumbest Senator."

John Thune probably is a dumb idiot moron -- most people are -- but here's the thing: the tweet is still up. He could have deleted it, and now that Politwoops is shut down, it could have sailed quietly into non-existence. That it's still up indicates that John Thune's team considers this tweet useful, a positive contribution to the Republican messaging battle ahead of the King decision.

He may be right. As we like to say around here, everyone is terrible and nothing will ever get better. And one of the reasons why Democrats should not assume that a ruling for the plaintiffs in King will totally backfire on Republicans is the cynical, but powerful, source of leverage that Thune is tapping into here: Democrats passed health care reform, and thus Democrats will get blamed for anything bad that happens to the health care system.

One thing that would most certainly be bad for the health care system is if subsidies for plans purchased on the 34 states that didn't set up their own exchanges get tossed out. As our man Thune says, millions of people will drop their coverage once it becomes unaffordable, and premiums for those who stick with their plans -- who are more likely to need their health insurance right now -- will skyrocket. Since the only "fix" that Republicans would even consider offering would be laced with poison pills that would do even more damage to health insurance risk pools, congressional Democrats and the White House can't support them. On the federal level there would be gridlock and, unless the affected states move quickly, health insurance markets could spiral out of control.

I'd like to think that Republicans would take the blame for this by refusing, at first, to pass the "one-sentence fix" that President Obama mentioned yesterday. New York Magazine's Jonathan Chait takes this more optimistic view, writing that this will play out like a government shutdown: Republicans will make all sorts of conditions for restoring the subsidies, but as public pressure builds to restore them, they'll cave and agree to a clean one-sentence fix.

But here's another way it might play out: health insurance premiums will soar, people will be unable to afford coverage, and... the public will blame it on President Obama and the Democrats, because they passed this law in 2010 and suddenly health insurance is really expensive. Thing "A" happened, and now thing "B" happened, so Thing "A" must have been a terrible idea. Republicans will say, look at how much the IN-surance costs now! as part of their pitch for electing a Republican president who would eliminate this original sin from the federal code. Republicans always suffer in government shutdowns because the public is conditioned to blame Republicans for government shutdowns. Democrats will suffer if the subsidies are struck down because Republicans have successfully conditioned the public to blame Democrats for any bad thing that happens in health care.

Thune's tweet was not a political overreach into new frontiers of stupidity. He knew what he was doing, and his nonsensical argument is an early taste of the bullshit that's going to rain from all GOP quarters if SCOTUS kills the subsidies. Obamacare resulted in six million people losing their subsidies, so Obamacare is terrible and must be repealed. Oh, the hacks are going to run with this like nobody's business, because it has a decent chance of working. Prove me wrong, America, please.