Despite his giant influence on U.S. politics, many of us still don't understand the Gipper, H.W. Brands tells Salon 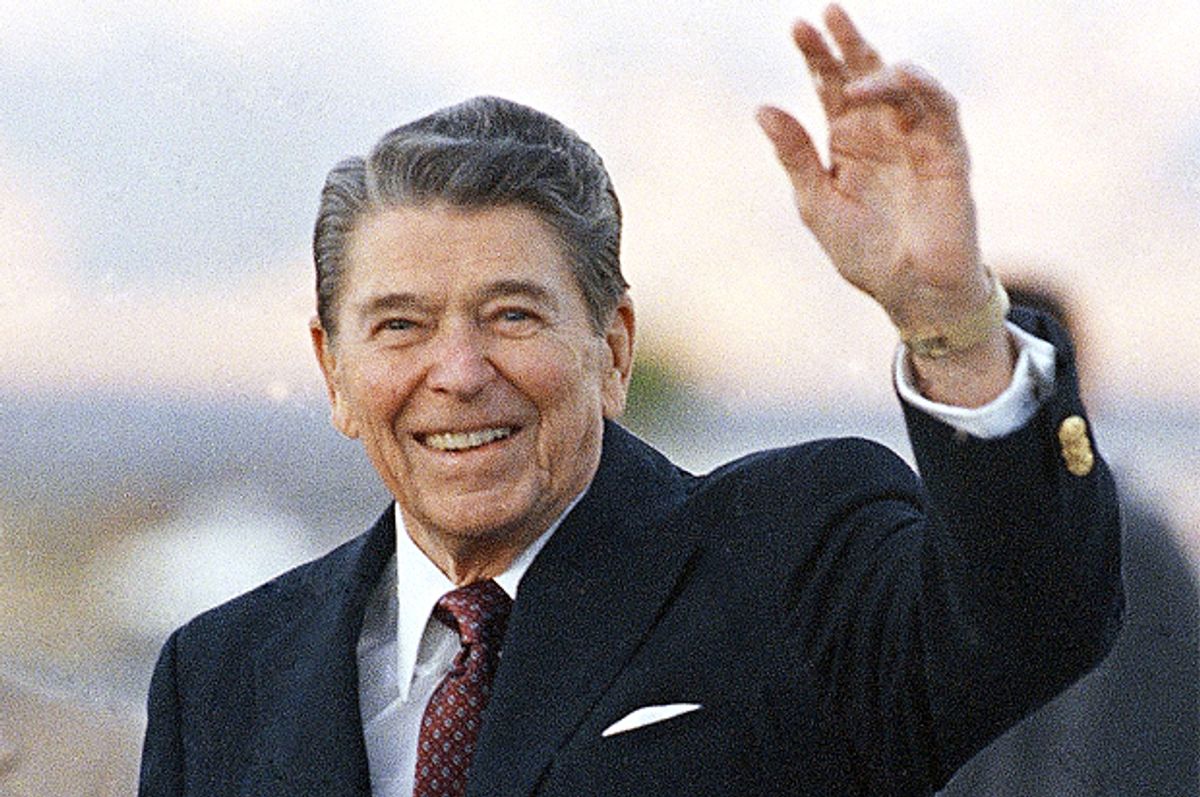 For American political junkies — especially those who never liked him in the first place — it's hard to imagine a figure in living memory whose persona and worldview has been more thoroughly combed-over, scrutinized and disseminated than that of the country's 40th president, Ronald Wilson Reagan.

The Republican Party rank-and-file, of course, can't get enough of him. Nary a day goes by during the 2016 campaign (which is happening more than 10 years after Reagan's death, incidentally) without one or more high-ranking GOP candidates promising to be Ronaldus Magnus for the 21st century. But Democrats often have Reagan on the mind, too — especially the current president. In ways big and small, we seem to still be living in the house Reagan built.

Yet while most of us are familiar with "Ronald Reagan," the icon and lightning rod, fewer of us quite understand Ronald Reagan, the man. And according to the celebrated historian H.W. Brands, who's authored a new biography — titled, fittingly, "Reagan: The Life" —  the real Gipper was both more and less than the myth suggests. Recently, Salon spoke with Brands over the phone to discuss Reagan, his presidency and his ultimate legacy. Our conversation is below and has been edited for clarity and length.

Right off the bat, you argue that Reagan is to the second half of 20th century American politics what FDR was to the first half. That’s a strong claim — how do you defend it?

Reagan began his presidency famously — or notoriously, depending on your point of view — by saying that government is not the solution, but the problem. I think it’s not an exaggeration to say that that is the attitude that has guided American politics pretty much ever since. If you look at the course of American history from the 1980s until now ... from the '30s to the '60s and '70s, new government programs came often and easily. You could look at the New Deal in the 1930s and the Great Society in the 1960s. Even Richard Nixon’s administration was liberal by today's standard.

Since Reagan, new government programs have come rarely and with great difficulty. With Reagan, the conversation in American domestic and political life shifts in a conservative direction.

So those areas — changing the conversation in a markedly conservative direction domestically; and essentially leading the United States to the brink of victory in the Cold War — are the two strongest pieces of evidence that Reagan’s presidency was extremely important.

Any successful leader — especially a political leader in a democracy — is someone who has to suit the times. You can be the most talented person in the world and if the times aren’t appropriate, you’re not going to get anywhere.

I do make the point [in the book] that Reagan was exceedingly fortunate in his timing. If [former Federal Reserve chairman] Paul Volcker had come along later — if the recession that happened in 1981 and early '82 had happened in 1983 and 1984 — then Reagan would have probably been swept from office in 1984 the way Republican members of Congress were swept from office in 1982.

The timing is very fortunate for Reagan; [upon leaving office], he could claim victory for his economic program. But, in fact, the victory, the improvement in the economy, owed a lot to forces beyond Reagan’s control.

Would you argue the same is true vis-à-vis the Cold War?

Reagan was looking for an interlocutor in the Soviet Union. He wanted somebody to talk to. He reached out to Leonid Brezhnev, but Brezhnev was too old and too set in his ways.

But then comes Mikhail Gorbachev, someone who is of a reform-framed mind, who is willing to look at the Soviet Union differently, and who is therefore willing to look at the United States differently. If not for Gorbachev, Reagan’s desire to lead the world to a situation beyond mutual assured destruction, beyond the shadow of nuclear war, would have been utterly frustrated; and Reagan would not be remember as somebody who led the United States to the brink of American victory in the Cold War.

The timing was everything. Reagan himself — his talents, his background — was probably a necessary condition to the things that happened. But he certainly was not a sufficient condition.

How do you understand Reagan's relationship with white supremacy and racism? This has been one of the more contested elements of his legacy in recent years.

The first thing I’ll say is that there is absolutely no evidence whatsoever — and in fact that there is evidence that would contradict it — that Reagan himself was a racist, or had any tendencies in that direction. Reagan was one who took equality seriously, and no one has ever charged that Reagan was a personal racist.

The fact of the matter was that Reagan was the candidate of a party, and the president of a party, that included a lot of people who had racist ideas. Reagan didn’t believe that it was any obligation of his to call out the racists in his party; he understood that if he could get racists to vote for him, he wasn’t going to reject their votes.

What about his frequent talk of states' rights? That's pretty widely seen as coded language intended to appeal to Southern whites who opposed African-American equality.

Reagan was a believer in states' rights. This was independent of the question of race. Now, it definitely was the case that Southern reactionaries all cast their opposition to the civil rights movement in terms of states' rights. There were those people who used states' rights as a code word to go ahead and try to defend those white supremacist policies. But Reagan believed in state’s rights; he could say with a straight face that, generally speaking, policies that are made at the state-level are better than those made at the federal-level.

Reagan was smart enough to understand that there were people who would interpret this in a particular way. He did not feel obliged to disabuse them of that notion. In fact, he would use that notion in order to gain votes and get elected.

Another point of dispute has been whether he was really that involved in his own administration. There was a narrative on the left — then and now, actually — that he was an empty suit and a salesman and had little to do with actual governance. What did you find in that regard?

Reagan was the quintessential "big picture" guy. He had two goals as president and he reiterated them again and again. One was shrink government at home. The other was defeat communism abroad. When issues that crossed his desk dealt with those, then he was right on top of that. When issues diverged from that, he himself got distracted.

Towards the end of the book, I say that Reagan had these two big goals and he accomplished one and one-half of them. The one that he pretty much decisively accomplished was defeating communism, or putting the world to the edge where communism was about to collapse. The half-successful one was shrinking government at home. Because if you subdivide that into reducing taxes and reducing spending, he got the tax reductions, but he didn’t get the spending reductions. Part of this was a strategic decision on his part to go for tax cuts first; do the easy part first and leave the hard part until the second. And part of it was probably an underestimation by Reagan of the difficulty of getting spending cuts.

When you say he struggled on smaller issues, for lack of a better word, what do you have in mind?

The biggest example of a failure on Reagan’s part was exactly where he was looking in the other direction: the Iran-Contra affair. Reagan sort of gave guidance, but then he left the folks in the West Wing — especially John Poindexter and Oliver North — to do what they wanted with minimal oversight. The result blew up in his face.

What are some truths about Reagan that you think liberals still don't see or won't acknowledge?

I would say liberals still don't take Reagan seriously enough. They didn’t take him seriously while he was president and they didn’t think that he would accomplish what he wanted to accomplish.

When I started working on this book, I was kind of suspicious of Reagan being a master of policy. But by reading his diary, by reading minutes of top-level meetings — especially in foreign policy — [I saw] Reagan was really engaged. He knew what he was about. When I read the transcripts of Reagan’s several meeting with Gorbachev at Reykjavik in 1986, [I saw] a guy who really knew what he was trying to get at, was fully engaged, and came very close to getting an absolutely historic agreement that would have gotten rid of nuclear weapons between the superpowers.

And what are some truths about Reagan that you think conservatives still don't see or won't acknowledge?

What conservatives are uncomfortable acknowledging is that Reagan was a much better politician, and a much more pragmatic figure, than they would like him to be.

One of the reasons that Reagan remains today an icon for all Republicans, from just right-of-center to the most zealous Tea Party activist, is that Reagan’s rhetoric was 100 percent conservative. Reagan essentially gave the same speech from 1964, when he first hit the national scene, to 1989, when he gave what amounted to his farewell address. It was conservative — chapter and verse; and if you want to place Reagan on a pedestal as conservative Republicans do, then all you have to do is quote Reagan’s speeches.