Marco Rubio's chaotic finances: He lives high on the hog -- while preaching austerity for everyone else

The 2016er's personal finances are a mess. He also supports a balanced budget amendment. These things are related 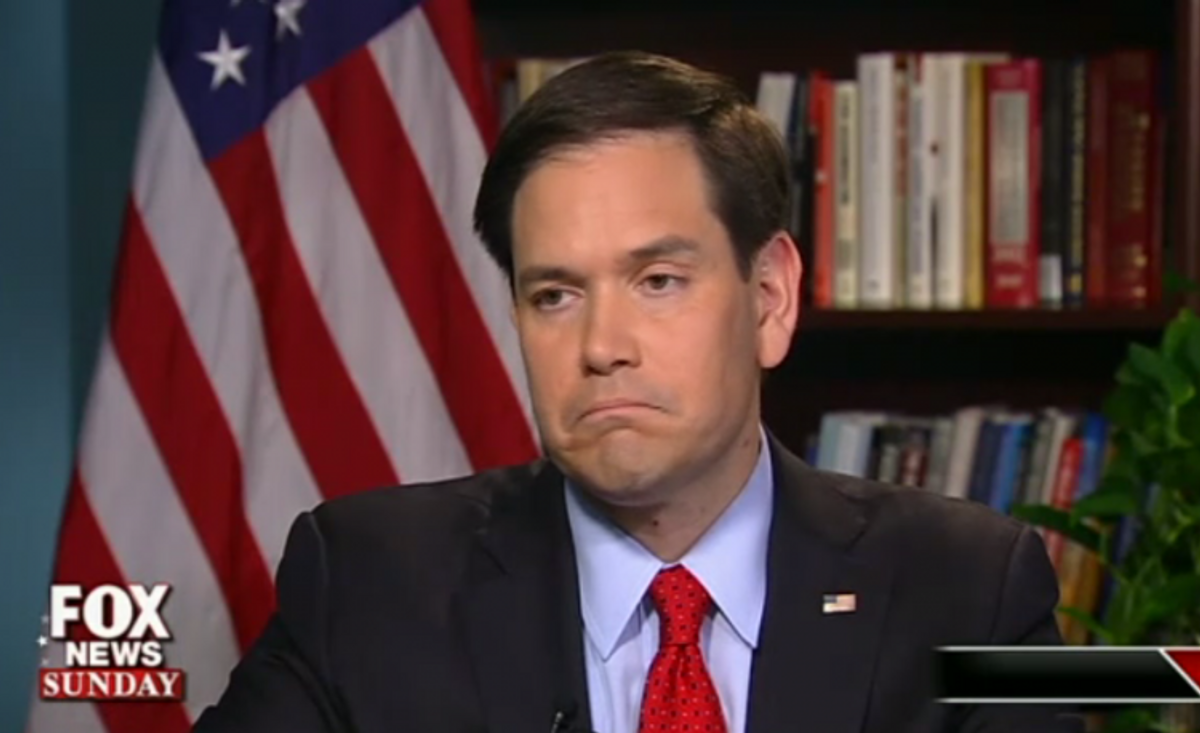 The New York Times is out with a story today about 2016 Republican presidential candidate Marco Rubio’s sorry state of financial disrepair. Per the Times: “A review of the Rubio family’s finances – including many new documents – reveals a series of decisions over the past 15 years that experts called imprudent: significant debts; a penchant to spend heavily on luxury items like [a new] boat and the lease of a $50,000 2015 Audi Q7; a strikingly low savings rate, even when Mr. Rubio was earning large sums; and inattentive accounting that led to years of unpaid local government fees.”

Conservatives are incensed at the reporting, claiming it’s a hit job that actually shows the Rubios are real people who struggle financially like the rest of us – a line that tracks nicely with the Rubio campaign’s preferred spin. That line works only up to a certain point: not too many average people are pulling in six-figure book deals and buying three houses. And as much as Rubio and his conservative backers would like to make this a fight over the elitism of Rubio’s critics, his financial history does undercut the message of his candidacy.

It doesn’t really matter what specific items Marco Rubio chose to spend his money on, but it is interesting to me that he’s spent several years badly in debt, and that he put off the responsibility of paying those debts in favor of splurging on those luxury items. The reason that personal choice matters is because Rubio, like most of the other 2016 Republican candidates, tends to mix very bad fiscal policy with scolding rhetoric about fiscal responsibility.

At several points over the past few years, Rubio has called for a balanced budget amendment to the Constitution: a terrible idea that would handcuff the federal government’s ability to spend during economic downturns (the precise moments when government spending is needed to stave off further economic decline). Like most Republicans who push for this awful policy, Rubio presents it as a curative measure that would force the irresponsible federal government to live within its means – just like “working families” all across America.

“With a $14 trillion national debt, we are at a defining moment in American history,” Rubio said in a 2011 statement, “and this amendment will force politicians in Washington to do what every family across our country must do in balancing a budget.” He trotted out the same rationale in 2013. “Practically every state, including Florida, has to balance its budget by law,” Rubio said at the time, “just as working families have to out of necessity.”

This is a nonsense talking point that Republicans and Democrats alike deploy whenever they’re trying to sell some form of short-sighted austerity policy. The federal budget bears vanishingly little resemblance to a household budget, but everyone loves families, and if families are balancing their budgets, surely the feds should try and do that as well, right? Of course, as Rubio’s own family budget makes perfectly clear, very few families across the country actually have “balanced” budgets – they put themselves deeply in debt largely because they have no other choice.

On top of all that, Rubio’s support for a family-inspired balanced budget amendment is paired with a tax policy that would explode the deficit in the service of drastically lowering the tax burden for America’s wealthiest households. And he also wants to bloat the military budget without finding new revenues to pay for it. It’s pretty much impossible to enforce a balanced budget amendment when you’re starving the government of revenue so that rich people can see a better return on their investments and also putting new aircraft carriers on the credit card. But dang it, if families can do it, then so can Uncle Sam.

That’s why Rubio’s personal finance disclosures are important. I don’t care what boat he purchased or what model car he leased, but I do care that he’s selling a disastrously bad economic policy using a contrived example of personal responsibility that not even he lives up to.