Indiana was just the beginning: A host of new "religious freedom" bills are coming. The target: Marriage equality 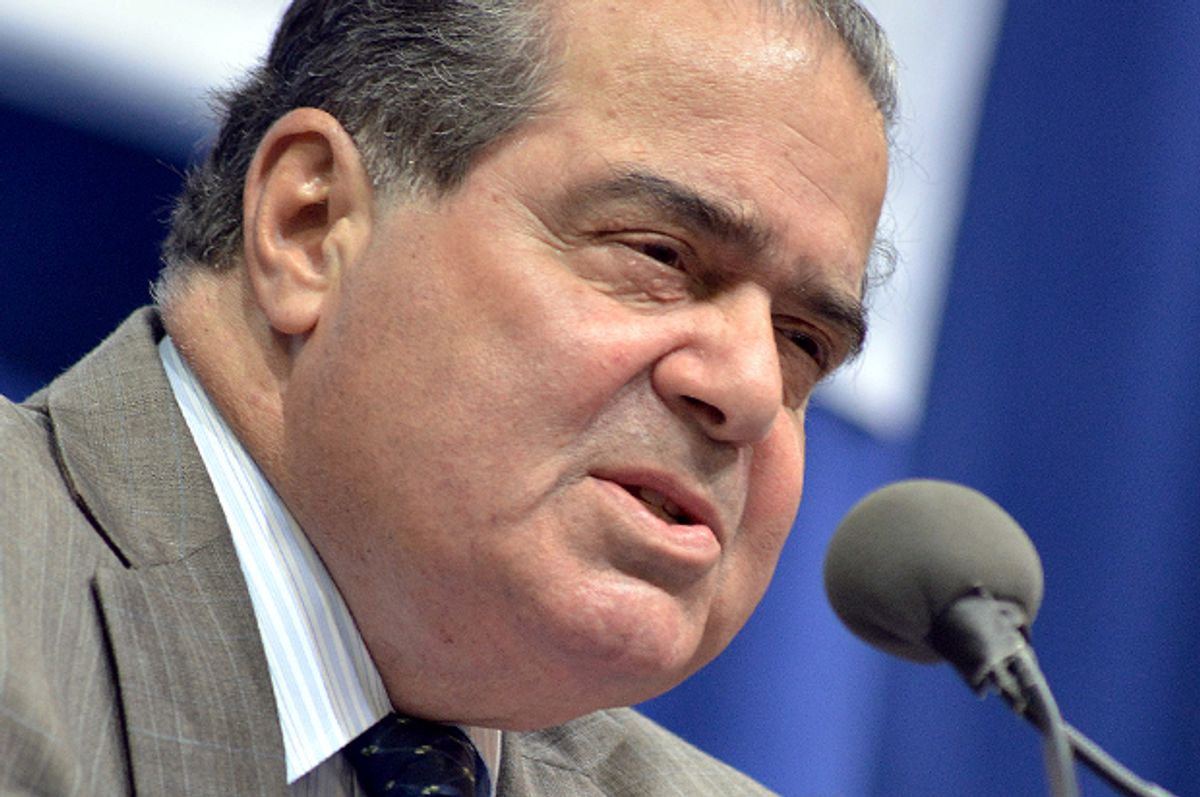 As most state legislatures recess at least for the summer, and as the Supreme Court decision on marriage equality in Obergefell approaches, it is a good time to review the status of proposed state “religious freedom” bills. These are, in part, a component of the far right’s efforts to reframe their decades-long war against every advance in societal acceptance and legal rights for lesbian, gay, bisexual, and transgender (LGBT) Americans into a noble effort to protect “religious liberty.” The vast majority of such legislative proposals have died, been watered down, or been defeated this year, with the business community playing a critical role, along with clergy and LGBT and civil liberties groups. But the success of several such bills, the controversy around others, and the oral argument in the Obergefell case all suggest – assuming the Court rules in favor of marriage equality – that there is much more to come, including future litigation that may well reach the Court.

Spurred in part by the Supreme Court’s decision last year in Hobby Lobby on the federal Religious Freedom Restoration Act (RFRA), and by lower court decisions in favor of marriage equality, state RFRA legislation was proposed in 16 states this year. As explained elsewhere, Hobby Lobby effectively rewrote RFRA, making it possible for corporations and others to try to exempt themselves from anti-discrimination and other rules by claiming that compliance offends their religious beliefs. State RFRA legislation could, for example, allow a baker or landlord to claim a religious exemption from a public accommodation or fair housing law that otherwise would have required them to serve LGBT couples. When such a law passed in Indiana in March, the outcry was immediate and loud, with businesses and others ranging from Salesforce to AFSCME to the state of Connecticut to the NCAA canceling travel or threatening withdrawal from the state. The law was promptly amended to state that it could not be used to justify discrimination based on race, gender, sexual orientation, or other grounds, prompting outcries from right-wing supporters.

Forewarned by the Indiana experience, Arkansas Gov. Asa Hutchinson vetoed the original RFRA passed in that state in late March, demanding a bill “just like” the federal RFRA signed by President Clinton. As a result of Hobby Lobby, however, one supporter accurately noted that although the original Arkansas bill was a “Rolls-Royce” for the religious right, the revised bill signed by the governor was still “a Cadillac.” The fact that there are no state or local laws that protect LGBT people in Arkansas from discrimination, from which the state RFRA could provide exemptions, may well have quieted opposition, although the opposition of businesses like Wal-Mart was notable.

Other than these two states, however, no other state has seen a RFRA bill pass this year, and bills in 12 states (Georgia, South Dakota, West Virginia, Wyoming, Utah, Nevada, Colorado, Texas, Oklahoma, Montana, Hawaii, and Maine) have been voted down or died. Governors in the two states where RFRA bills remain pending as of June 1, Michigan and North Carolina, have suggested they may not sign such bills, no doubt reflecting on the Indiana experience.

A second type of religious refusal bill relates more specifically to marriage, permitting different types of individuals to refuse to do things they would ordinarily do because of personal religious objections to specific types of marriage. Examples include bills allowing business to refuse to provide goods and services to same-sex couples getting married and bills exempting public officials from issuing marriage licenses when they have a religious objection. Legislatures in Utah and North Carolina have passed such bills, while bills in eight other states (Alabama, Arkansas, Louisiana, Missouri, Minnesota, Oklahoma, South Carolina, and Texas) have died or been defeated.

Some LGBT advocates have suggested that the Utah law does not in fact change much. It provides that religious officials cannot be required to perform or recognize a marriage they have religious objections to or be retaliated against for doing so, all of which would likely be guaranteed by the First Amendment anyway (as Justice Kagan noted pointedly when Justice Scalia raised the issue during the Obergefell oral argument). The law provides that county clerks must either agree to perform all marriages without discrimination, or designate someone in the office who will. It also states that religious organizations are not required to provide goods and services with respect to marriages to which they have religious objections, and prohibits retaliation against licensees and others based on their religious views on marriage, but the legislature also enacted at the same time a bill providing some protections against LGBT discrimination in employment and housing.

A dramatically different type of bill was introduced in Louisiana. Similar to a federal bill introduced in 2013, the Louisiana Marriage and Conscience Act would have prohibited denial of any state grant or contract or any other negative action concerning any individual, business or other entity that acted “in accordance with a religious belief” concerning marriage. In other words, the bill would have given permission to businesses and others to refuse to recognize same-sex marriages. When a House committee effectively killed the bill in May, Gov. Bobby Jindal issued an executive order attempting to provide similar protection for anyone who “acts in accordance with a religious belief that marriage is between one man and one woman,” although the legal effect of Jindal’s order is unclear. A likely Republican presidential candidate, Jindal has aggressively supported the bill, including writing a New York Times Op-Ed on the subject.

In May, the North Carolina Legislature passed a bill that allows government officials to refuse to perform marriages or even issue marriage licenses when they have a religious objection. This would apply not only to LGBT marriages, but also to interracial or any other marriages. Officials who take the religious opt out would be required to not issue any marriage licenses for six months, which could force any couple to go from official to official or office to office looking for someone who will marry them. Republican Governor Pat McCrory vetoed the bill, but the Senate overrode his veto and, as of this writing, a House override vote is being scheduled.

What happens after the Supreme Court rules?

If the Supreme Court rules in favor of LGBT marriage rights, it is a sure bet that we will see more action in this area, in the states and elsewhere. Some religious right activists are using rhetoric of revolution and martyrdom. The issue has already become intensely political, exemplified by Jindal’s executive order and presidential candidate Mike Huckabee joining Alabama Chief Justice Roy Moore’s demands that states refuse to comply with a pro-equality Supreme Court ruling. In May the Republican National Committee passed a resolution specifically encouraging the enactment of state RFRAs. Given that lower court rulings and the possibility of a Supreme Court decision upholding LGBT marriage has already led to so much activity, an actual Court holding protecting the right to marry is certain to do much more.

In addition, the oral argument in Obergefell made clear that the issue of religion is very much on some justices’ minds. Although Justice Kagan easily dealt with Justice Scalia’s nonsensical suggestion that a Court ruling in favor of LGBT marriage could force clergy to perform or recognize marriages to which they have religious objections, more difficult questions were raised by Chief Justice Roberts and Justice Alito. Would a religious college that offers married student housing be required to extend that benefit to same-sex couples? Could the IRS revoke the tax-exempt status of a religious university that opposes LGBT marriage, as it did with respect to a university that opposed interracial marriage? Solicitor General Verrilli had no easy answers to those questions, although he did note that state and other anti-discrimination laws may determine the answer. Much will depend on the way a pro-LGBT marriage decision is written, but it is quite likely that dissenting justices like Scalia will loudly complain about the alleged harm the decision will cause with respect to religious liberty, which will further stimulate proposed legislation and court action.

Anti-equality activists are already gearing up to respond to the Court’s ruling. Republicans in states such as Georgia are making plans to re-introduce RFRAs and other legislation; the Georgia Republican party, for example, passed a resolution in favor of the Georgia RFRA bill in May. Religious Right activists are heralding the possible reintroduction of the federal Marriage and Religious Freedom Act, which would prevent the federal government from withholding benefits from or taking action against anyone who “acts in accordance with a religious belief” that marriage “should be recognized as the union of one man and one woman.” Similar state proposals as in Louisiana are likely as well.

A Supreme Court decision upholding LGBT marriage rights would be an enormously important result. It is clear, however, that it will not put an end to debates about marriage equality and religious liberty.