McKinney is just the beginning: The shocking real numbers on race, the police and overuse of force

Police brutality is in the headlines again. The problems are worse, and go even deeper, than you would ever imagine 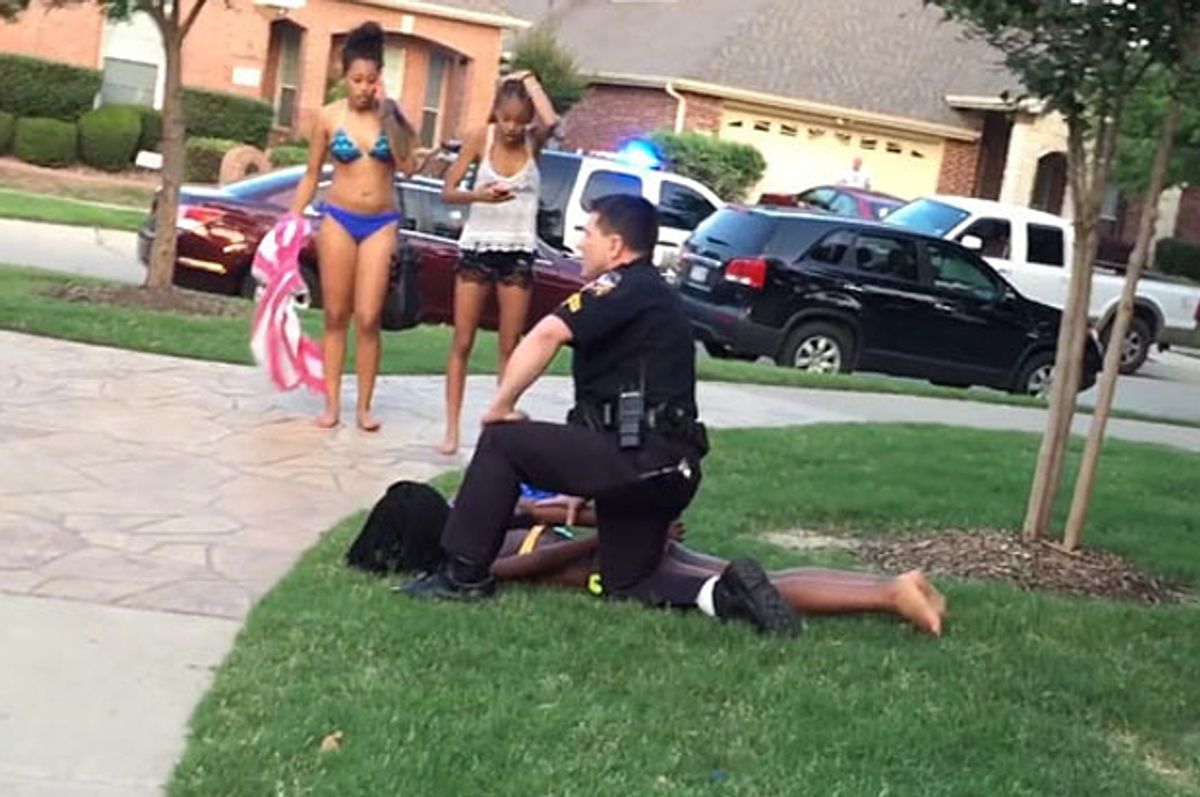 Police brutality has been an integral part of the black experience since the birth of the modern law enforcement. Until recently, however, it was difficult to establish how stark or pervasive the problem was; this opacity plagues many aspects of the U.S. criminal justice system. In part, the data has been hard to come by due to the decentralized nature of policing in America: while the FBI attempts to collate national statistics on the use of force, they rely exclusively on voluntary reporting from America’s 18,000 law enforcement agencies--the overwhelming majority of which (more than 95%) do not participate fully or at all.

However, the uprisings in Ferguson and Baltimore have trained the social consciousness on police use of force. And as a result of open-source data mining and some outstanding investigative journalism, a clearer picture of the problem is finally beginning to emerge…and it isn’t pretty.

An in-depth report from the Washington Post identified nearly twice as many fatalities from police than FBI estimates--and this investigation only considered shootings. Over this same period dozens have been killed by Tasers, in chokeholds, by vehicles, or otherwise while in police custody. For information on these, The Guardian has a more comprehensive and interactive database, updated in real-time.

Some troubling patterns elucidated by these studies include:

When faced with these statistics, police advocates often contend that officers are generally acting within their legal authority in carrying out these killings. To substantiate this claim, they point to the fact that cops are rarely found guilty of having committed any crime--a line of defense premised on the notion that if police had committed wrongdoing, they would be held to account for it. Unfortunately, this is not the way things seem to work:

According to a Department of Justice (DoJ) study, up to 84% of law enforcement have witnessed what they would describe as brutality against civilians; 61% say they have failed to report even “serious criminal violations that involve abuse of authority by fellow officers.”

Most law enforcement misconduct complaints are never investigated. But even for those few brutality incidents are referred to prosecutors, less than 5% of these end up getting pursued in court. And when cops are brought to trial, they are convicted only 1/3 of the time. By contrast, the conviction rate for the civilian populace is nearly 95% (90% of these cases never even see their day in court—even people who are demonstrably innocent often feel compelled to plead guilty. And for those few with the means and grit to go to trial, the conviction rate still approaches 70%).

On the other hand, police are regularly found to have committed wrongdoing in the civil sphere. However, the costs of those lawsuits are borne by the taxpayers rather than the bad cops; city or state governments, or else the police department itself, generally pay associated legal fees. In the event of a judgement in favor of the plaintiff, it is these same entities which pay the fine, with little-to-nothing out of pocket for the offending cop. In fact, the officer generally continues to draw his salary throughout, even if removed from duty during the investigation and trial. The price citizens pay to shield police from their own misconduct is staggering, with settlements and legal fees amounting to perhaps billions of dollars nationwide every single year. Meanwhile, police unions often prevent cops from being terminated or otherwise penalized for these infractions—regardless of the cost to those whom cops are supposed to be serving and protecting.

In short, the only story conviction rates tell about police misconduct is that those tasked with enforcing the law are, themselves, largely above it.

But even in those instances where police were acting within the limits of their authority, this is just to say that the use of force was legally acceptable, not that it was necessary. There is a wide disparity between the two. And insofar as casualties are preventable, they are morally repugnant regardless of their legality. As we shall see, a good number of these killings can probably be avoided with sufficient social will.

From statistics to solutions

In discussing ways to increase transparency and accountability for police officers, public attention has been focused almost exclusively on body cameras. It is easy to see why: they promise a simple technological “fix” to what is otherwise a very complex and unsettling sociological problem. However, it is unlikely that the cameras will prove nearly as effective in practice as their advocates claim. This is in large part because the utility of any technology has to be indexed to the environment in which it is deployed—and in many precincts the conditions (and prospects) of success for body cameras are either limited or altogether non-existent.  However, it may be possible to derive more tailored and effective policies from the information we now have at hand. For instance:

Half of the police killings reported by The Washington Post occurred when cops were called to intervene in domestic situations—often involving the mentally ill or disabled. The callers are often relatives simply seeking help for, or temporary respite from, a troubled loved one—these are not situations which necessarily demand a forceful response.

As an alternative, just as we have medical professionals to help people deal with physical emergencies, we could cultivate first-responders trained in fields like psychiatry, negotiations and conflict management to help de-escalate domestic situations and connect people to resources through which they can address underlying mental health or relationship problems. To the extent that police accompany these responders, it should be in a support role. And these cops should also be better trained and equipped for non-lethal neutralization.

Additionally, jurisdictions should eliminate mandatory arrest and prosecution policies for domestic disturbances. The fact that if a cop shows up someone will be going to jail—this will naturally escalate a situation and raise the stakes of police intervention. In practice these policies tend to further victimize and traumatize the women they are designed to protect—especially women of color.

Beyond responding to domestic emergencies, one of the most frequent situations leading to violence are serving warrants and routine traffic stops which spiral into conflict. There are a couple components to this problem which could be addressed:

Because tickets are how police departments remain financially solvent, many officers are pressured into making a large number of stops, and issuing citations for relatively minor infractions that pose little immediate threat to public order or public safety. In practice, this amounts to a regressive tax, with the majority of funds being raised from the poor—often with disastrous consequences for those affected.

To remove these perverse incentives, and mitigate the burden on the poor, money raised from citations should be earmarked to help recruit and retain more public defenders and legal advisors—creating a more equitable and adversarial justice system, as described in the Constitution. Law enforcement should instead be funded by a progressive income tax. The stability of this new revenue stream would leave police departments much more secure in their budgets, empowering officers to dedicate their time and energies to pursuing more pressing and serious crimes.

For instance, while cops are occupied with broken windows and busted tail lights, 1/3 of the murders in the United States go unresolved. Similarly, most reported sexual assaults fail to result in an arrest, let alone prosecutions and convictions. In fact, most rape kits are never even processed. This lack of follow-through by law enforcement plays a significant role in the epidemic levels of sexual violence across the United States.

In contrast, the model proposed here would reduce police interference in people’s daily lives, and increase efficacy in solving major crimes. This would dramatically reduce the adversarial relationship between law enforcement and the communities they serve, bolstering goodwill and cooperation instead.

However, it is not enough to change the operations and incentive structure of these departments— police cultures are also in need of substantial reform. Routine situations have a tendency to escalate in large part because police are indoctrinated with a “warrior” ethos which encourages a forceful and overwhelming response to the slightest sign of non-compliance. The idea is, quite literally, to dominate those they come in contact with in order to maintain control of situations. Officers are told that their very lives, and those of their colleagues, are dependent upon this swift, unrelenting retribution. As a result, as we have seen, police are 28 times more likely to kill a civilian than vice-versa.

Additionally, police are typically not from the areas they patrol, nor do they live anywhere near them—this disconnect exacerbates the already-pervasive fears law enforcers have of the public. Trying to build a more representative police force, and emphasizing community policing, will help remove these barriers. In areas where this dissonance is particularly strong, departments could also offer generous incentives for officers and their families to relocate and reside in, or closer to, their duty areas.

From mass incarceration to mass movements

The need for these reforms is urgent across the United States, as there are myriad ways officers abuse their power, violate citizen’s civil rights, and betray the public trust. Many of these breaches do not result in fatalities, and would not be captured in casualty statistics--but they remain very important to redress: ultimately, law enforcement reform is about improving the quality of people’s lives rather than simply changing their manner of death.

But as it relates to fatalities at the hands of law enforcement, the Washington Post and Guardian investigations reveal radical disparities in how these incidents are distributed: all police killings nationwide have been confined to less than 2% of the nation’s police precincts. The 20 worst offenders (amounting to 1/10 of 1% of America’s 18,000) were responsible for more than 1/5 of the total killings.

Perhaps counterintuitively, if one wanted to make the largest possible impact on reducing police killings, the states where activists should concentrate the most effort are Oklahoma, Arizona, California and Texas.  These four states alone account for nearly 36% of casualties by law enforcement nationwide.  They also contain cities with some of the highest numbers of police killings in the country (the worst four are Los Angeles, Houston, Phoenix and San Francisco).  In addition to being among the 5 states with the greatest number of total casualties, Arizona and Oklahoma have the highest per-capita rate of police killings in the nation. California and Texas rank in the top third for per-capita casualties (no easy feat given that these are the two most populous states in the U.S.)—and they are the two worst states in the nation in terms of total deaths at the hands of police.

However, most law enforcement policy is decided at the state level—and these are all states with Republican governors and Republican-dominated state legislatures. This constituency tends to view police as a bulwark protecting “good, upstanding Americans;” they often look upon the poor with contempt and upon minorities with suspicion. Accordingly, initiatives to protect these and other vulnerable populations from police overreach are unlikely to resonate—even less-so if it requires raising taxes to restructure police incentives.

Changing this dynamic will require left-leaning activists to engage the right in terms of its own narratives, values and priorities. A good starting point may be to avoid blaming Republicans for these problems, and to instead acknowledge the pivotal role that liberal policies and politicians have also played in building and perpetuating the mass incarceration state.

It took a broad coalition to create this oppressive system—dismantling it will require no less. Equal rights, protections and dignity under the law is not a partisan issue—it’s a human rights issue. And that’s how we need to approach it.