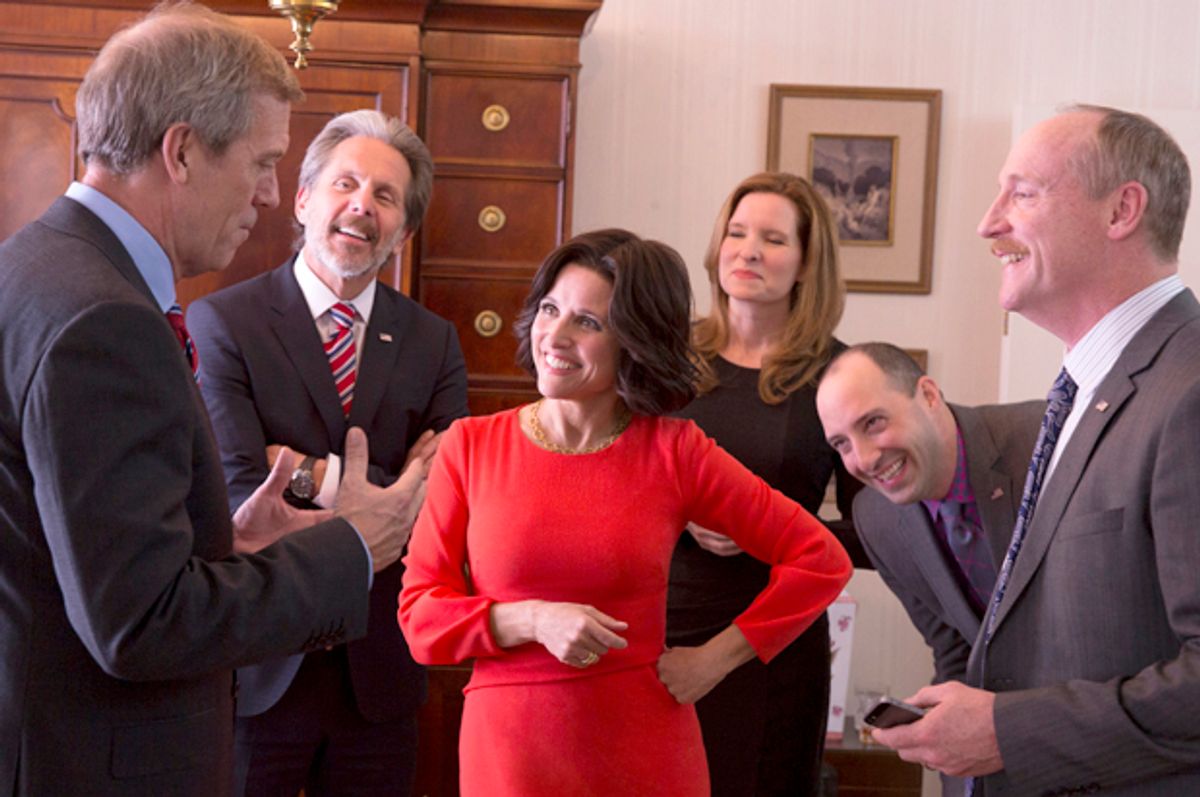 There’s a side to HBO's “Veep,” which is airing its fourth-season finale this Sunday, that is prophetic, critical, even subversive: The story of the first woman vice-president who eventually becomes into the first woman president, turned sour by thwarted ambition and constant passing-over. As if to highlight it, Selina Meyer (Julia Louis-Dreyfus) is hilariously diminutive, so short she needs a stool to be seen over the podium. It’s reminiscent of “Scandal”’s operatic arias on politics—where Olivia Pope (Kerry Washington) is a stand-in for the fragility of black experience, emphasized by her starkly grayscale wardrobe, her quivering lower lip, her fragility in every setting, from the Oval Office to a prison cell. “Veep” isn’t a mockumentary like “The Office,” but the show’s direction retains a little of that voyeuristic quality, making for camerawork that sneaks up on its subjects and unearths tiny, remarkable details. The show has the capacity to be subtle and dramatic, picking out moments of monumental failure and private triumph.

But all of that is merely the amuse-bouche to the main appeal that “Veep” offers—pure, unadulterated cynicism, offered sparingly in 30-minute doses so as not to poleaxe its audience. It’s a show predicated on the notion that everyone on it is greedy, incompetent, or both; a comedy about bad things happening to the terrible people who richly deserve it. The characters, who are all intensely competitive with each other, layer their disgust in dense banter that is so crammed with jokes that there’s almost no time to laugh before you have to listen for the next one. This, on top of situations that are sometimes just a few shades away from giddy slapstick, a la Benny Hill: An episode about two sets of lobbyists unwittingly working against each other turns into brief parody of a car chase scene (“Dan! Get out of my car!” “Do you think I want to be in this fucking Minecraft piece of shit?”) and then shifts, nearly effortlessly, to the Sackler Gallery’s gift shop, where an incompetent congressman tries and fails to lie about his mother’s good health. It’s a show that runs a mile a minute, with careless disregard towards any fear of running out of plot or using up punch lines.

The difference between these terrible people and any others is that they’re in positions of unimaginable power and influence; the tragedy in the comedy is that those bad things are happening not just to these government officials but to an entire nation and even, at times, the entire planet. “Veep”’s power is in shifting the balance between the gravity of the setting and the idiocy of its characters; the stakes could barely be higher, but the competency could hardly be lower.

This season, “Veep” has been better than ever, and largely that’s because that unwieldy balance has been more pronounced than ever. At the end of last season, Selina became the leader of the free world—and then immediately had to start campaigning for the seat, as she stepped in after the former president resigned. “Veep” has occasionally toyed with the idea that if faced with real problems, Selina might jettison her self-interest and assume more gravitas. This season has tossed that notion out the window, revealing Selina in her messy, narcissistic glory as a woman terrified of judgment and rejection, even in the abstract. In the midst of a dinner party where Selina lashes out at a former colleague for being no fun now that she’s sober (!), the Secret Service rushes in to form a protective huddle around her. There’s an intruder in the building. Nowhere is the contrast between political office and the politicians themselves more marked: Here are men willing to die to protect the president, but Selina herself is an objectively terrible person. Dwarfed by burly gun-toting agents, Selina complains, loudly. And then she orders her daughter to put down the ice cream, because it will just make Catherine fat.

And “Veep”’s storytelling has shifted, too. Past seasons have attempted to make the political machinations clear to the viewer. This season, exposition has been jettisoned as not being quite important enough. There are numerous plot developments that happen off-screen—two episodes ago, “B/ill” started with Gary (Tony Hale) discussing a new strategy that no one had articulated before. The directive seems to be: Focus on the farce. Don’t tell the audience they’re incompetent before anything happens; show it in gory detail as they run around in circles, working against each other and against the public interest. Last week’s episode, “Testimony,” went even further with the conceit, taking the show to its most mockumentary format yet: Every scene was a taped deposition or a C-SPAN broadcast grand jury hearing, arranged in chronological order. The effect was less like an episode and more like a curated gallery exhibit—watch as the setting stays the same but the words change, as assumptions float up and can’t be explained, as one person inches closer and closer to possible jailtime.

There is one last thing “Veep” did this season to make this past season so indelible—and that’s tearing apart the close, codependent relationship between Selina and her chief of staff, Amy Bruckheimer (Anna Chlumsky), after a maddening campaign meeting where Selina refuses to listen to anything Amy has to say, even though they both know Amy is right. Chlumsky has long been one of the show’s unsung heroes, a less obvious comedic star next to Louis-Dreyfus’ easy charm, Hale’s slapstick, and the doofy blank stares from Matt Walsh as Selina’s press secretary. And yet Amy has been perfectly neurotic, perfectly workaholic, a worryingly recognizable portrait of idealism gone awry in the world of politics, all while staring at her BlackBerry and maintaining a battle-ready posture in high heels. Unlike the lovable and execrable Dan (Reid Scott), who Selina hires in the show’s pilot to be the slimy closer they need, it’s clear Amy has some real desire to do good buried under taupe skirt-suits and long streams of cursing. Losing Amy, in some ways, is the most dramatic thing that could have happened in this show, because Amy was for so long Selina’s last tether to the person she used to be, when she first decided to go into politics.

And yet—as hilarious as it has been, watching Amy attempt to decompress without her job—the show isn’t quite over for these two women’s relationship to each other. They meet up in the finale, perhaps indicating that even Selina Meyer has a passing acquaintance with her better self. And also indicating that maybe, under all that cynicism, the beating heart of “Veep” is far more idealistic than it seems.