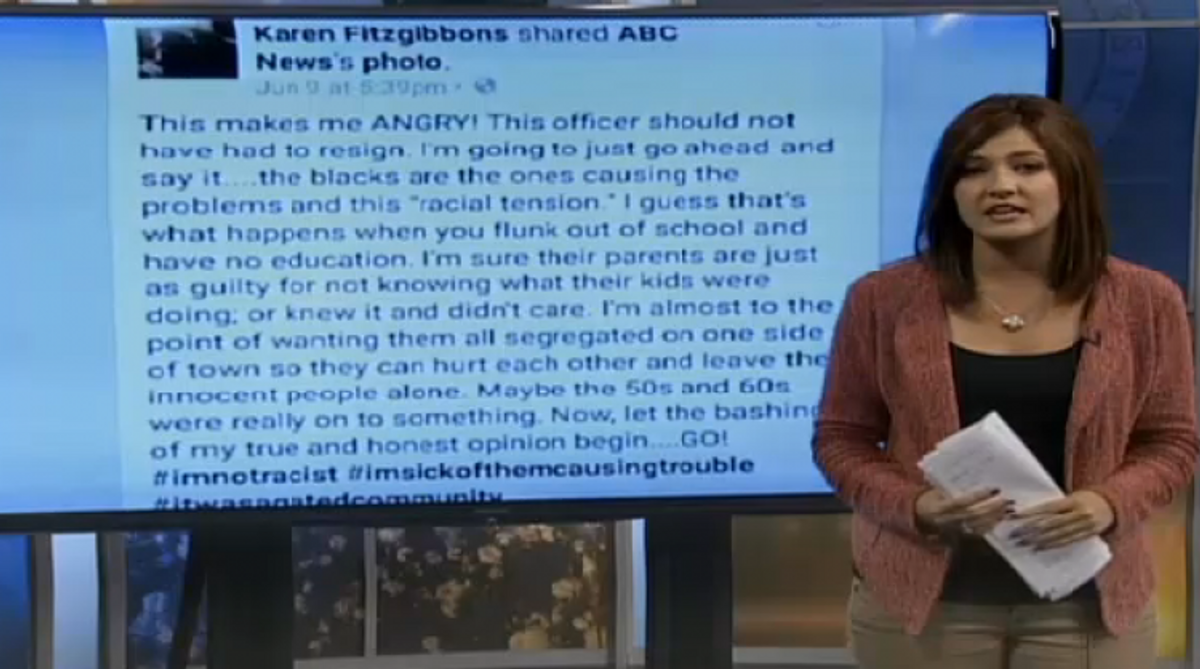 A fourth grade teacher in Texas has "apologized to the appropriate people" after she defended resigned renegade McKinney cop Eric Casebolt in a Facebook post calling for a return to segregation.

According to the Lubbock Avalanche-Journal, Karen Fitzgibbons, a fourth grade teacher at Bennet Elementary in Wolforth, Texas, took to Facebook on Tuesday to express her frustration with the outrage in McKinney, Texas and nationally after a police officer was videotaped violently manhandling a 14-year old girl at a pool party and pulling out a gun on other unarmed teenagers.

Fitzgibbons wrote that the she was "ANGRY" the cop had resigned  and blamed "the blacks"  for causing "racial tension," complaining that all the commotion had pushed her "almost to the point of wanting them all segregated on one side of town so they can hurt each other and leave the innocent people alone."

"I’m going to just go ahead and say it ... the blacks are the ones causing the problems and this ‘racial tension.’ I guess that’s what happens when you flunk out of school and have no education. I’m sure their parents are just as guilty for not knowing what their kids were doing; or knew it and didn’t care. I’m almost to the point of wanting them all segregated on one side of town so they can hurt each other and leave the innocent people alone," Fitzgibbons wrote in the since-deleted post.

She continued: "Maybe the 50s and 60s were really on to something. Now, let the bashing of my true and honest opinion begin....GO! #imnotracist #imsickofthemcausingtrouble #itwasatagedcommunity."

When asked about her now deleted rant, Fitzgibbons told the Avalanche Journal that she hoped the whole thing had blown over already as she had "apologized to the appropriate people," even though Fitzgibbons insisted that her words weren't actually "directed at any one person or group."

According to the Avalanche-Journal, Andy Penney, director of public relations and information at Frenship Independent School District, confirmed that District knew of Fitzgibbons' post and that she remained a fourth grade teacher at the elementary school.