Jerry Seinfeld is a wimp: What his anti-P.C. tirades are really about

If the latest debate over political correctness proves anything, it's that *comedians* need to grow a thicker skin 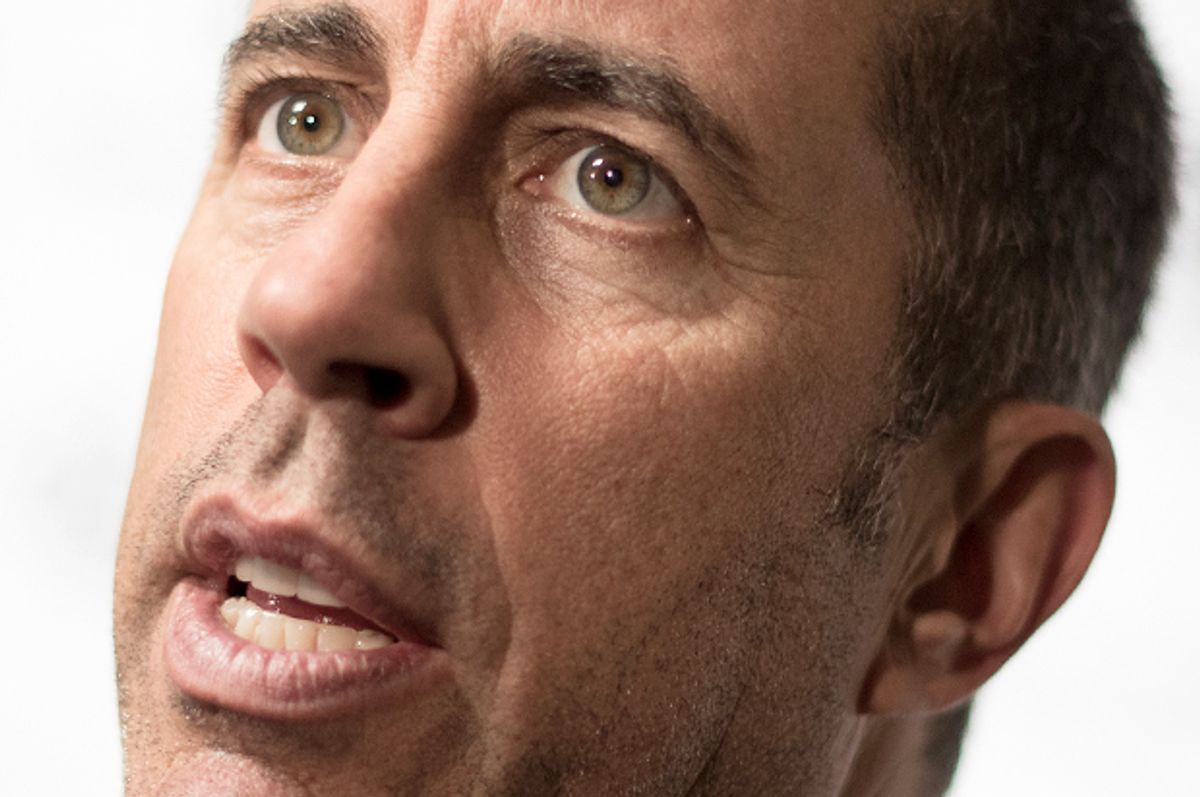 Jerry Seinfeld, observational comedian of the masses, has been on the warpath of late. Starting with an interview on ESPN Radio on Monday, the decidedly non-edgy comic proceeded to stake his claim as the latest standard-bearer in the ongoing war between comedians and political correctness. "I don’t play colleges," Seinfeld told ESPN's Colin Cowherd, "but I hear a lot of people tell me, 'Don’t go near colleges, they’re so PC.'"

Seinfeld then launched into an anecdote about a recent interaction with his own daughter that apparently got under his skin:

My daughter’s 14. My wife says to her, "Well, you know, in the next couple of years, I think maybe you’re going to want to hang around the city more on the weekends so you can see boys." You know, my daughter says, "That’s sexist." They just want to use these words. ‘That’s racist. That’s sexist. That’s prejudice." They don’t even know what they’re talking about.

A little more than a day later, during an interview on “Late Night With Seth Meyers,” Seinfeld doubled down on that line of thinking, stating that today’s comics have a harder time being edgy because Internet critics "keep moving the lines in for no reason":

I do this joke about the way people need to justify their cell phone. "I need to have it with me." Because people are so important. Well, they don’t seem very important, the way you scroll through it like a gay French king. [...]

I did this line recently in front of an audience. And comedy’s where you can kind of feel an opinion. And [the audience] thought “What do you mean gay? What are you talking about, gay? What do you mean?" And I thought, “Are you kidding me?”

I could imagine a time where people would say that’s offensive, to say that a gay person moves their hands in a flourishing notion, and you need to apologize. There’s a creepy P.C. thing out there that really bothers me.

If it’s not enough of a red flag when a trio of wealthy straight white men -- Seinfeld and Meyers, along with New Yorker editor David Remnick -- discuss the looming threat of political correctness, Seinfeld’s sweeping generalization of college-aged audiences packs an arrogance that gives this defender of nothing-is-off-limits comedy pause.

(Also worth noting: Seinfeld is upset merely because he could sense that the audience was made uncomfortable by his joke. By his very own telling, nobody even said anything! C'mon Jerry.)

Seinfeld's warnings about the existential threat to comedy are especially hard to take seriously when considering the modern landscape. We’re experiencing what some have dubbed the second comedy boom, thanks in part to younger audiences and the power of the Internet. And edgy comedy is part of our national conversation: Amy Schumer is the new Amy Poehler. Louis C.K. makes a joke about child molesting on live TV and survives to tell the tale. Hell, Artie Lange’s career miraculously didn’t end when he tweeted a sex-slavery joke about a female ESPN anchor. Comedians have more people talking, thinking and asking questions about their performances than ever before. If this is what an existential crisis looks like, sign me up.

That isn't all that's wrong with Seinfeld's claims. During the ESPN interview, he uses his daughter’s comment about sexism to equate young vocal critics of comedy (who, it bears pointing out, are oftentimes coming from marginalized communities) to children; the dismissiveness of his claim that “They don’t even know what they’re talking about” is downright insulting. There’s a reason why the word “sexist” is part of his daughter’s lexicon at a young age. As compared to older age groups, young people are hyper-aware of social injustice and the treatment of marginalized groups, and it’s been proven to them that social media is a powerful tool to demand more from society. He should be proud that his daughter is savvy enough to be on the lookout for sexism, even if she wasn’t exactly on the mark that time.

Of course, not everyone Seinfeld is criticizing is so noble. As Lindy West wrote, "It’s absolutely true that some individuals use political correctness to disguise what is, in reality, a regressive devotion to propriety. There are people who simply have no sense of humour." But that's not even remotely the same thing as political correctness being a clear and present danger to the future of comedy.

Yes, it sucks when comedians are unfairly burned at the stake for something said in jest, especially jokes that could seem racist or sexist on the surface but have a more subversive meaning -- like the comedy of the late Patrice O’Neal, for example, or even Joan Rivers. News media and the people who consume it are still learning how to treat comedy like any other art form, and to see the comedians’ side of things in ambiguous circumstances.

And yes, you can certainly argue that comedy was, in many ways, more effective back when everyone just enjoyed it as a live, of-the-moment performance and didn’t analyze it to death on the Internet afterwards. What’s that old E.B. White quote? "Analyzing humor is like dissecting a frog. Few people are interested and the frog dies of it." This is still true (and funny!) But to offer an updated view: A joke is less funny when dissected, but comedy as a whole becomes stronger and more legitimized as an art when subjected to the same criticism as other forms of cultural expression. And it goes both ways: When a joke is really bad, sometimes it’s worth having a conversation to figure out why it upsets us.

The Internet has forced comedians to grow a thicker skin, be accountable and be even braver about their material, which is challenging, but a good thing for comedy in the long run. If you focus on being the best you can be, and if that best is edgy enough to get negatively blogged about, you’re still doing your best and more people are talking about the medium. Do we not still agree that all publicity is good publicity?

SNL’s “Weekend Update” host Michael Che is a good and often-cited example of a comic who regularly offends, reacts, and repeats. And from the looks of things, he has fun doing it. Sure, some of his jokes were skewered enough that he deleted his Twitter account , and if you’re lucky enough to read his more private rants on Facebook you’d think that feminist bloggers, comedy critics and the same P.C. left that Seinfeld evoked are ruining all of his fun. But then you realize, oh wait, he’s working a comedy dream job and doing whatever the fuck he wants. If he’s able to turn adverse reactions into career fuel, what’s the deal with Jerry Seinfeld?