Steve Albini is wrong: "If we don’t have copyright, we don’t get paid" 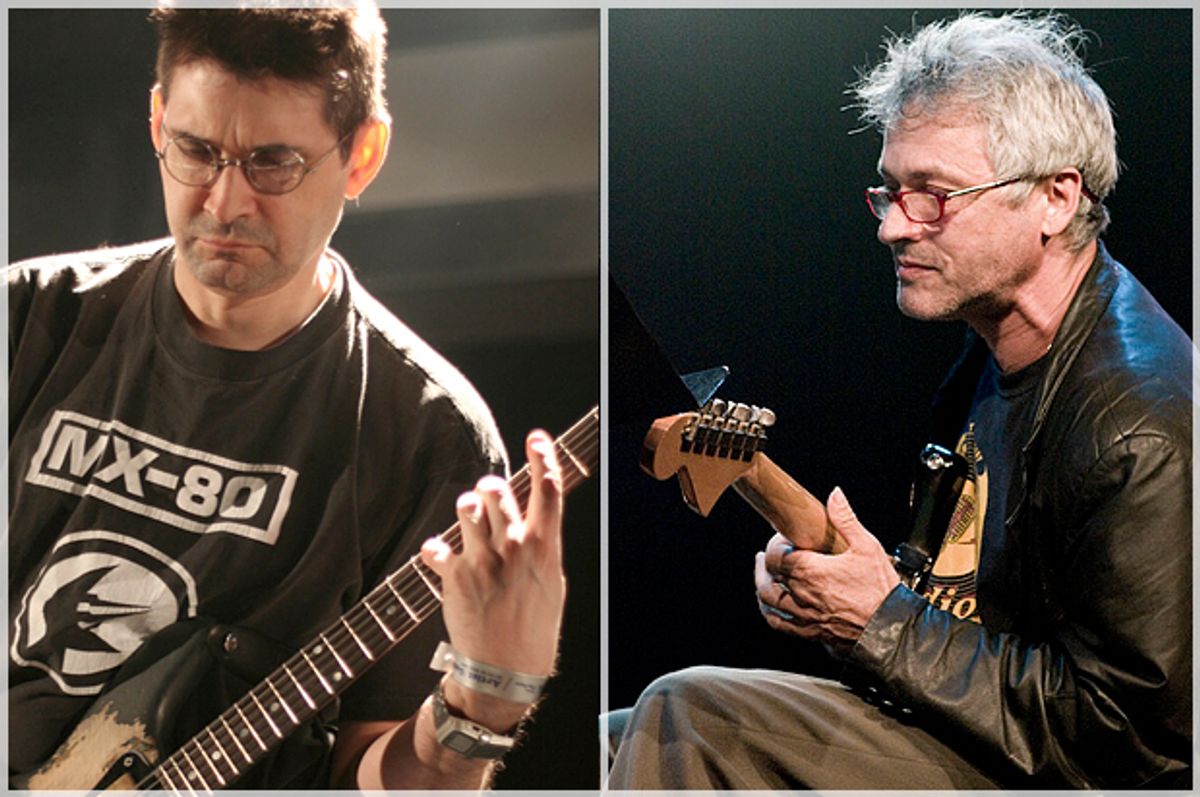 It’s become trendy for people on both sides of the aisle to diss copyright. Now an important figure in the indie-rock movement, musician and recording engineer Steve Albini, has compared copyright to smoking in public. Albini, who’s had a hand in albums by Nirvana, the Pixies, Silkworm, Magnolia Electric Co. and many others, recently told Billboard:

I think we’re seeing that the intellectual construct of copyright and intellectual property ownership is not realistic. Ideas once expressed become part of the common mentality. And music once expressed becomes part of the common environment. I think that the idea of intellectual property will naturally have to be modified to accommodate the way that people naturally exchange ideas and music and information. That old copyright model of the person who wrote something down owns it and anyone else who wants to use it or see it has to pay him, I think that model has expired. And people who are trying to defend that model are like people on horseback trying to fight against the automobile…

Albini also downplays the seriousness of music piracy, which he doesn’t think deserves the term. (“Actually, piracy is people boarding a slip with violence and killing people and physically stealing material goods that are then no longer available to people who used to own them.”)

You could almost hear the collective jaws dropping of musicians, writers, photographers and others who make their living from their work. We spoke to one of them – jazz/rock/experimental guitarist Marc Ribot, who serves on the executive board for the artists rights group Content Creators Coalition. We reached him in a New York studio where he was recording a new album.

Let’s start out specifically with your frustrations with Albini’s article about copyright being broken. What’s he saying and what’s wrong with it?

Well, what he’s saying, quite literally, is that the intellectual construct of copyright and intellectual property ownership is not realistic. He’s saying copyright is expired, it’s outmoded. And beyond that, beyond saying it’s outmoded, he doesn’t think it’s a good thing to begin with, is what appears from his statement. And I think that copyright is not outmoded, and neither does Steve Albini when I challenged him on it, when I posted something saying, “Listen, if you don’t think copyright is good for you, then there’s an easy way out. Creative Commons has a license, has a particular easy to fill out form, in which you can basically donate your music, or any part of it, to the public domain. And when I posted this, I said, “Are you willing to put your catalogue, your life’s work, where your mouth is?” Albini responded, no he wasn’t. His exact response, I have in front of, “Your challenge that I put everything in the public domain is a needle I’m not going to indulge.”

Well, why is copyright important to a working artist, whether it’s music, or any other field? Copyright has been under fire from both sides of the political spectrum. You have libertarians, wild-west types, who think that it’s a bad idea, and you have a copy left movement that also tries to cut holes in copyright. Why do artists need it?

By the way, I will answer the question you want me to answer in a second. But, I really question whether the copy left is “left.” My own background is from a tenant union and labor union background, and I question a left which breaks with every single union and is not concerned with the outcomes for people who work in an industry, and I question a left which can mistake the destruction of an industry with its socialization. That’s not a left I recognize.

It gives us control. It’s the way I can prevent my music from showing up in a film I hate, or in a political ad that is disgusting to me. It’s the way I can prevent my music from being used without my being paid or credited in situations which I don’t want. Now, a number of people have suggested that artists are --including Steve Albini -- that artists are asking for some kind of special treatment. This isn’t special treatment. We’re asking for the same rights that every other person in a society that makes things has. The right to own what we make, until we sell it. The right not to sell it if it’s a bad deal.

You’re saying this is part of our tradition in the democratic West, you’re not trying to import some sort of radical utopian idea; this is the way our society has functioned for a long time.

Yeah, it’s the way that our society has functioned, and I understand that many people have different -- have questions about whether it’s the way our society should continue to function. But, let’s just say that I’m not an absolutist in any sense, but to talk about really socializing the music industry, here, now, in the United States, a country which practically restarted the Civil War over a third-rate health insurance plan, is not even close to realistic.

One subject that comes up in these conservations, and I think you have a particular interest in this, is the notion of DIY. I’m a GenXer, I came of age in the late ‘80s when DIY was the solution to everything cultural, it seemed. Now, looking back, DIY seems more complicated, and perhaps dangerous. How do you come down on this one?

Well, I think DIY is great. I think it enables a large number people to become creatives, who would have otherwise felt intimidated from doing so, or who were, because they were aesthetically radical, or for whatever reason might not have had access to work as a cultural producer.

But the problem with DIY is when it hardens into an ideology that precludes any kind of corrective action. When you do it yourself precludes taking action in situations in which we need to do it ourselves, in which it becomes a set of blinders.

And at that point, I just need to point out, that Steve Albini has been very vocal in telling people that they shouldn’t sign -- that signing a major label record deal was crawling through a trench of running shit, and, you know, I’m all for indie labels, I’ve put out most of my records on indie labels, and anyway, the point is moot, the days when major labels were interested in the kind of stuff I make is over, it’s done.

But I need to say that there’s an ugly side to these claims. I mean, yes, I’ve seen all the abuses that upset Steve Albini and others… The problem is, I’ve seen even worse behavior from indie labels, many of which are also corporate, all of which are also businesses, and they have their own forms of irrationality. So, sometimes, “do it yourself” is the solution to the problem. But other times, fighting for fair treatment, from whoever is going to put the record out, is the solution to the problem. And I don’t think that we should wear blinders that prevent us from seeing any of the solutions that are there.

What seems like the ugly side of DIY is to pretend that everyone has the same possibility of doing it yourself, quote. In other words, generally indie labels, after all the hype, give you less money up front in exchange for a better deal on the back end. That’s wonderful, if you can afford to make your record, if you can afford to pay out of pocket to make your record at the time. If you can’t, well then, record companies are essentially banks -- or specialized investment firms -- which fund the junkbonds we know as record.

And so, to condemn, is not an alternative. It’s capitalism at its most typical -- it’s the exchange of risk for money. So, the people who put up more money, who take a bigger risk by giving you money to produce your noise-guitar album, ask for a bigger piece of the pie if any money is made.

And so, to moralize about this, and tell people, “Man you’re crawling through a trench of running shit, signing with a label that gives you money upfront,” it’s a little bit like a rich kid with a nice bicycle, saying, “Man, why do you ride that shitty old bicycle? Don’t you know that this kind of bicycle is better?" Or to somebody who wants to buy a house, saying, “Man, why are you going to the bank for a mortgage? Don’t you know how much money they charge? Why don’t you just pay cash?” Well, that’s cool for people who happen to have $200,000 in their pocket, but it’s not cool for most of us.

Well, let me ask you, you’ve been a guitarist who’s played in a wide range of settings for a while now, what politicized you on these issues of artists rights and the digital economy? What pushed you over to devoting so much of your time to something that’s not strictly musical?

Well, years ago, in the ‘80’s, I was in a tenant union. I became active in a tenant union because basically, well it’s a long story but my landlord was messing with me, I became active in downtown New York in the tenant union, I started doing volunteer work. And so, I learned basic organizing skills. So I stopped doing that, but when issues arose in my community of musicians, I kind of became a jailhouse lawyer, and I knew how to say, “Well okay, if that bugs you enough, let’s call other people who it bugs and get them to come down to a meeting and we can do something about it.” So, I got involved in that way. And even before the digital rights issues came up, we had some indie organizing efforts around some like jazz festivals that were getting corporate money but still trying to pay people just as if it was a regular gig at a jazz club. You know, still underpaying. And so I became involved in that way.

Did something push you over? What showed you just how bad the current situation was?

Well, first of all, like everybody, in the beginning I thought the digital revolution was going to be the best thing since bread was sliced. I remember, my manager at the time was always telling me, “Oh, no, this is going to be fantastic, don’t worry about a thing.”

And I thought, this can’t be right, I must have done something wrong. I must have failed to register. And then I found out, no, we’ve done everything right, we’ve registered, and meanwhile -- and I started talking to other musicians, they were having the same experience -- but meanwhile, the hype was going on: “No, this is great! This is fantastic!”

And, when people started to speak out about it, started to ask questions, “Well, how come we’re not getting paid, and how can we get paid if these people on the pirate sites are posting our stuff for free download?” Anyways, I saw that there was a lot of hype going around. I saw that there was a taboo against us speaking up about what was really going on. And, you know, I’ve always thought rock and roll is about farting in church, you know.