"The game isn't the NBA. It's the American racial empire": Let's talk about basketball's white-privilege problem

Matthew Dellavedova is one of basketball's dirtiest players. Why has it taken so long for people to admit it? 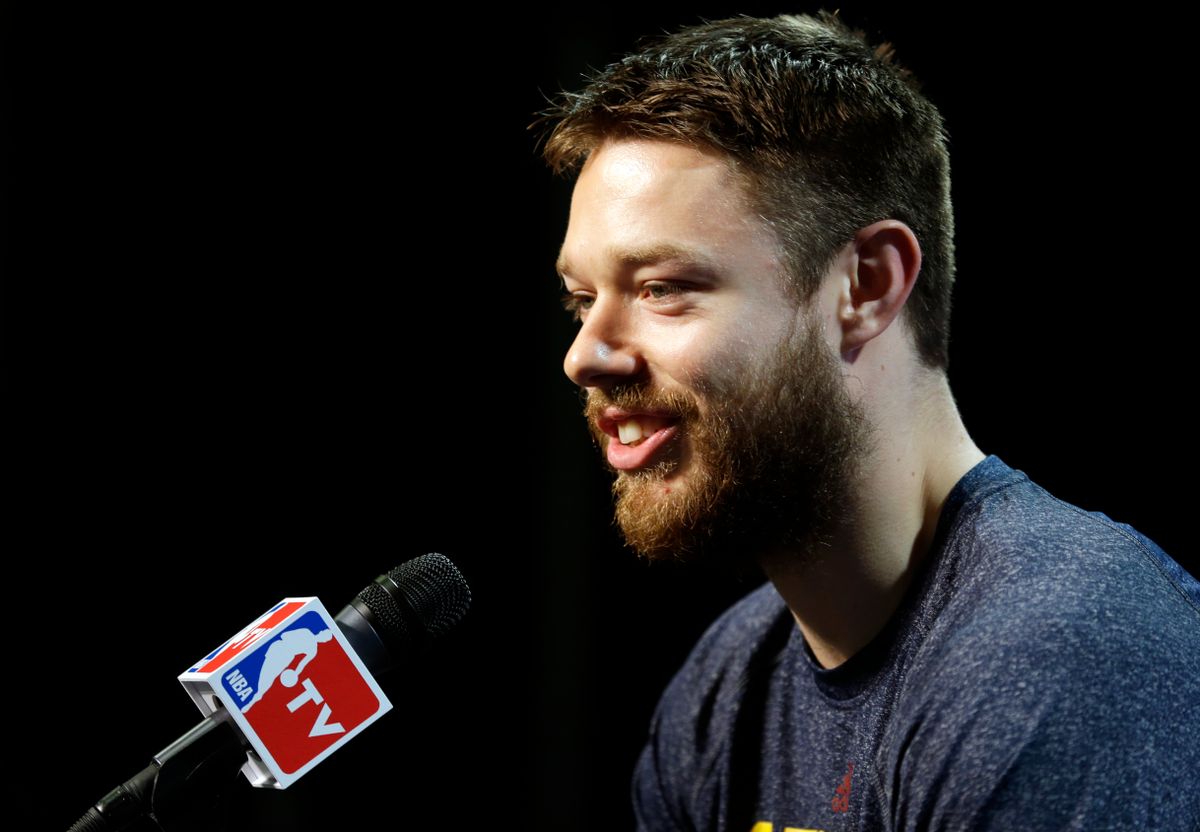 After game 3 of the NBA Finals on Tuesday night, you either love Matthew Dellavedova or you hate him.

The hate is growing, but there’s a surprising amount of love out there for a player whose attack on an opponent all but cemented for many the charge that Dellavedova, a point guard for the Cleveland Cavaliers, is a player with such wanton disregard for other players that he may not even have a place in the NBA. His 2015 playoff run reads as much like a rap sheet as the heroic tale being spun about him.

But Dellavedova is white, and that matters. He’s a rare white player in a black league, a league that many media commentators considere to be “full of thugs,” -- an appellation that NFL superstar cornerback Richard Sherman says is the “accepted way of calling somebody the N-word now.” Dellavedova is also a white player in a league searching for white fans, white acceptance and white money. Atlanta Hawks owner Bruce Levenson sold his stake in the team last year after a leaked email revealed his worries that the blackness of the sport kept away “white males and corporations.” Dellavedova is also a white man in a country where white men very often get away with what black men cannot (see any number of instances of white violence against black innocents). So some fans are beginning to wonder if a certain white privilege is allowing Dellavedova to elude more serious condemnation for a series of alleged attacks on other players.

Unlike the fist fights that ever so rarely break out in the NBA, and which get their black participants branded “thugs,” Dellavedova’s attacks are uniformly on the legs and knees, dirty tactics that have already cost one victim his season, and which could irrevocably damage a player’s career and livelihood.

Unseen by most and unacknowledged by announcers during Tuesday’s game 3, Dellavedova provided perhaps the most convincing evidence yet that the mounting accusations are true: He’s a dirty player. He’s violent. He’s a thug. He’s dangerous. And he’s a threat to virtually every opponent he faces.

An attentive NBA fan captured the moment on Vine, which pretty clearly shows Dellavedova lowering his shoulder and aiming for Golden State Warrior star Draymond Green’s legs. Yes, Green set a hard illegal pick, a shoulder bump. But Dellavedova’s retaliation was an attempt on Green’s ACL. It's a bit reminiscent of how we imagine certain cops acting: There's some response warranted, no doubt, but Dellavedova goes immediately into excessive territory, as a matter of course.

The jury was still largely out until Tuesday's attack on Green. Some were convinced early on when Dellavedova tried to twist up the legs of Chiacago Bull Taj Gibson in the second round of the playoffs, and a little murmur went through the NBA world when Gibson (a black player) was ejected for trying to kick his leg out of Dellavedova’s jiu-jitsu leg hold. Dellavedova was allowed to keep playing. Then, in the conference finals, the whispers got considerably louder when Hawks all-star Kyle Korver’s season was ended after Dellavedova crashed into his legs, spraining the sharp shooter’s ankle. Dellavedova did the same thing later in the series to Al Horford, who was ejectedafter retaliating. In a post-game statement, Horford couched a severe criticism of Dellavedova in the sort of diplomatic language the mild-mannered player is known for.

“There’s got to be a line at some point. He’s gotta learn. He’s only been in the league for a couple years, but he’s gotta learn that it’s a brotherhood here.”

The evidence was mounting, and in-game and post-game talk turned to questions of Dellavedova’s morality. It was no longer avoidable. Many still felt that he was only a “scrappy” player, a “hustler,” a guy who makes up for minimal talent with maximal effort; but post-game commentator Kenny Smith, a former NBA player, laid out the case for Dellavedova being a danger to the league.

“You’re in too many [dangerous plays]. When you’re in several plays throughout the playoffs that involve that type of behavior then you’re not paying attention to the brotherhood.”

The next morning, commentators were treading a line: If you call Dellavedova a “dirty player” and affirm the worst accusations, you’re essentially asking him to be removed from the league. ESPN’s Stephen A. Smith tried to find as many ways to call Dellavedova "reckless" ("very," "irresponsibly," "excessively") without the crucial modifier: "intentionally."

Those worst fears about Dellavedova were confirmed for many when they saw him apparently going for the legs of Draymond Green Tuesday night. It locked the narrative into place for fans and sportswriters (and likely players too). The benefit of the doubt is evaporating.

The next day, Sports Illustrated, NBC Sports, USA Today, SB Nation, CBS Sports, and Bleacher Report, to name only a few, all ran stories openly asking the question, or making declarative statements, about Dellavedova’s willingness to put careers at risk. And yet the player was still considered a hero by some after his integral finals performance made him a household name. He even gets a nice, cute diminutive: Delly.

“Delly” memes proliferated on social media, and his own trip to the hospital after the game--for dehydration--was reported on in a way that offered sympathy to a player whose play puts every opponent at risk of going to the hospital for much worse.

Vassar professor and author Kiese Laymon, entertaining followers on Facebook with his live-commenting on game 3, caught Dellavedova’s attack during and offered a trenchant observation: Matthew Dellavedova is benefiting from white privilege.

Laymon, a consummate Cavs fan, broke from his die-hard fandom to criticize what he saw as an advantage had by his team’s white thug. “Too bad Golden State doesn't have a white boy to get away with shit like this,” he wrote. The comment was well-received with with “likes.”

“We all know that a little white boy can get away with shit in this league that black players can't,” he continued. “As someone who understands how antiblackness and white innocence work, I gotta at least call it out.”

It’s increasingly easy to apply Laymon’s critique of “antiblackness and white innocence” to the NBA and Dellavedova’s newfound fame. The NBA, a league with a preponderance of black athletes and fans, has suffered the racist perceptions of its players for decades. It’s somehow permissible to write about the league in the way the San Francisco Examiner’s Bob Frantz did in 2010, describing how the league’s “overly ink-stained players look like a bunch of gang-bangers playing in the recreation yard at Pelican Bay.” (Frantz even doubled down on his racism a few weeks later in the same esteemed pages: “A league filled with guys that look like thugs is bound to be filled with guys that act like thugs.”)

And Frantz is far from alone: Other sportswriters, bloggers, politicians, even top GOP tastemakers -- it’s an alarmingly common charge against a league full of professionals.

(Never mind that professional hockey, an almost wholly white endeavor, permits glorified gang fights on the field of play and builds into its teams’ rosters so-called “enforcers” or “goons,” players whose talent and worth is simply their willingness to be sent onto the ice not to facilitate scoring but to beat the shit out of opposing teams’ players.)

I spoke to Dr. Laymon after the game; after making sure to laud Dellavedova for the elements of his play that aren’t violent and dangerous, he explained his diagnosis of white privilege. “Delly fits well into our understanding of white masculinity in black dominated spaces,” he said,  “Not only is he always going to be deemed ‘scrappy’ and ‘hard working’ and ‘getting into [Golden State Warrior Steph Curry's] head’; we minimize the amount of violence he can (and does) cause on his fellow superhuman black players. He will never ever be deemed a ‘thug,’ no matter what he does on that floor.”

Laymon, while not denying that Dellavedova is a “dirty," (i.e. violent) player, broadens the issue outside the bounds of the basketball court; he sees the reaction (and non-reaction) to the player as symptomatic of how white privilege operates: “Definitely can't hate the player; gotta hate the game,” he said. “But the game isn't the NBA. It's [the] American racial empire, when rich white men own the teams, pay money to go to the games, and grant love and innocence to one of their own in ways they would never do for 'athletic' black players.”

It’s hard not to compare Dellavedova to fellow Aussie Iggy Azalea, a rapper who’s also been seen as a beneficiary of white privilege in a black cultural space. White participants are welcome in basketball and hip hop, but privileged recklessness is not. Azalea and Dellavedova are serviceable in their respective fields, but neither seems to know his or her place. Azalea is notably reckless on Twitter when critiqued for her privilege, while Dellavedova is out here rolling around like Sonic the Hedgehog toward players’ knees in way that is, at very best, disrespectful of the “brotherhood.”

And, like Laymon points out, it’s the perception and reception of Dellavedova (like Azalea) that is the ultimate problem. Each continues to be lauded placed undeservedly on a pedestal while showing open disrespect for the community in which they are guests.