The box that saved our sex lives 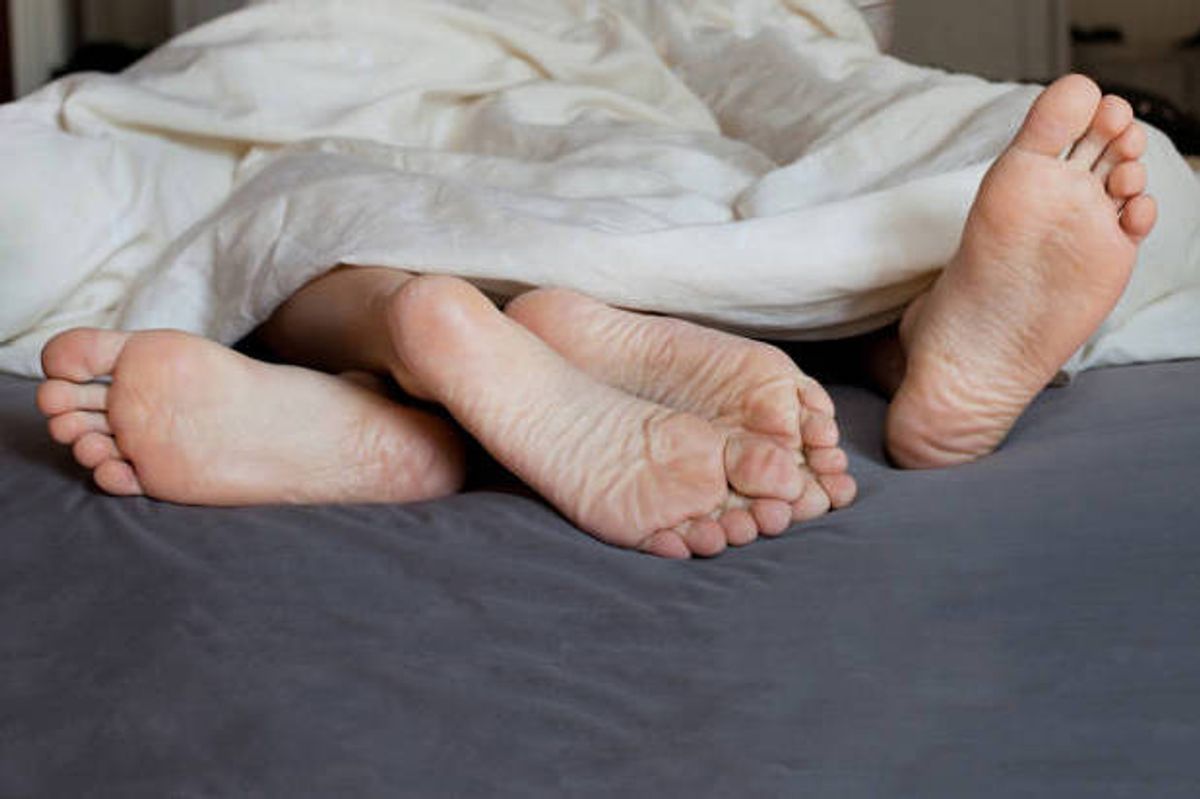 “When you get to the point where you are looking to 'spice up' your sex life, is it indeed already doomed?”

This was the irksome question/zen koan nagging at the back of my mind as I logged on to take a 100-question sex quiz on the Couples Chemistry [3] website.

It sounded fun, or maybe just funny, both of which sounded good. Plus, there was the outside chance that it might, like, work. It was a lot to ask of a kit—in my case, being tasked with spicing up a 29-year relationship (which, according to Hallmark, is the “Meh” anniversary.) There's also the issue of cost. The kit is $129 bringing up “sponge-worthy” decisions. Of course—of course—good sex is invaluable. On the other hand, $129 (!)

My agreeable husband and I retreated to separate computers, answering questions about our deepest, darkest sexual desires. Did I want “more humorous sexual play, laughter and discussion?” Did I like it “familiar and comfortable” or “aggressive”? Did I want more touching in the armpit area (nope!). They went pretty deep—there were questions about bringing pain or multiple partners into bed, but no super nichey stuff like wearing bunny suits or peeing on each other. I was honest, but it would have been better had I not just seen Going Clear in which I learned that this is how the Scientologists get you, too.

I must confess I went back to the test and changed my answers, saying I didn't want more humor and that I didn't like back rubs. I know, lies.

A couple weeks later our Couples Kit came. I left it sitting unopened on the bed and it sat there being exciting in the way that mysterious presents are exciting. The next day we broke into it and found a beautifully packaged black box in white wrapping paper with lots of little envelopes, pouches and boxes to open.

It was fun, funny and sexy all at the same time. For example, there was an envelope enticingly labeled “Open me.” Inside was a card reading, “Your shared intimate desire is...rough sex.” Hmmm. The dorky part was that there was also a “fun fact” card featuring info like “people who like rough sex like poetry, religion and grammar.” (Gentle sex folks prefer “boating, gardening and England.) Were we to read facts to each other while roughing each other up? Dumb. However, there was also a set of feathered restraints and some Japanese low-temperature drip candles. Intriguing.

The rest of our bounty followed the whole fun, funny, sexy, WTF line. Here are some things we found inside:

This doesn't begin to cover everything. There were also a bunch of other toys, lube, condoms, a mini vibe and a book about sex toys that looked wholly uninteresting. (I just confirmed this, opening the book to a random page and landing on this sentence. “Look sharp when purchasing a USB sex toy that doesn't include a teledildonic interface.”)

For our first foray, we chose to watch the “Advanced Sex Play: Position & Toys for Lovers” DVD even though we aren't actually advanced. After a rough start in which we fell into our old pattern by debating whether the dude narrating looked more like Dick Cheney or the Professor from the Muppets, we eventually settled in. It was a bit salesy, showing couples trying out different toys. They were “real people” (as, I suppose, all people are), which meant that they were paunchy and such, but still, they were fucking and it's difficult to be unmoved by that.

It led us to trying a new position, no small feat since we're not especially flexible. But it was fun. Score one for the sex box.

We'd agreed that next time we got into the box, we were going to get out those restraints and he was going to be rough and bossy. To be honest, I had my doubts he could pull it off. We'd never done it and he is just super-nice and respectful. But lo and behold, he was a total dick, magically channeling a certain college housemate/fuck buddy I'd been enthralled with. He barked sexual orders at me, and God help me, I was into it. But the best part was that, at the end, he turned back into my dear husband of 29 years.

“Sorry to fuck and run, but I have to go to work,” he said apologetically.

“But that's perfect!” I answered.

“Yeah,” he said with cruel detachment, getting it. “I'll call you.”

This time, we hadn't even used the sex box. Just the idea of it had helped.

The most inexplicable item was 1 Sheer Glyde Dental Dam, which I'm quite sure neither of us had listed as an erotic desire. We decided the third date meant dental dam sex. “Tastes like dentist hands,” said my husband, noting that despite being called “wildberry” the thin sheet was not flavored as such. “Worst Fruit Roll Up flavor ever,” I said. “It should be clear so you can see what you're doing,” he added, working away at not quite the right spot. “Maybe it would make me look all weird and distorted, like when a burglar puts a pair of panty hose over his face,” I said.

Despite our mood-killing commentary, it ended up being inexplicably good. Yes, even with a freakin' dental dam.

None of us needs a $129 sex box (and a ton of us can't afford one) but I loved that damn box. It wasn't anything in the box specifically, but it forced us to pay proper attention to sex. Anything that puts you in the moment and lets you see something with fresh eyes is going to be sexy. Even if it's a freshly dental dammed crotch.

This, oddly, is also what I discovered in that 4-page brochure, which, hell, maybe does know a thing or two. According to the Wisdom of the Brochure, “being fully and completely present during sexual experiences was the first and most frequently mentioned factor contributing to great sex.” Also good are “exploration, interpersonal risk-taking fun” and “vulnerability and surrender.”