The Fox News host railed against a rising tide of "socialists" like Bernie Sanders. Here's what he gets wrong. 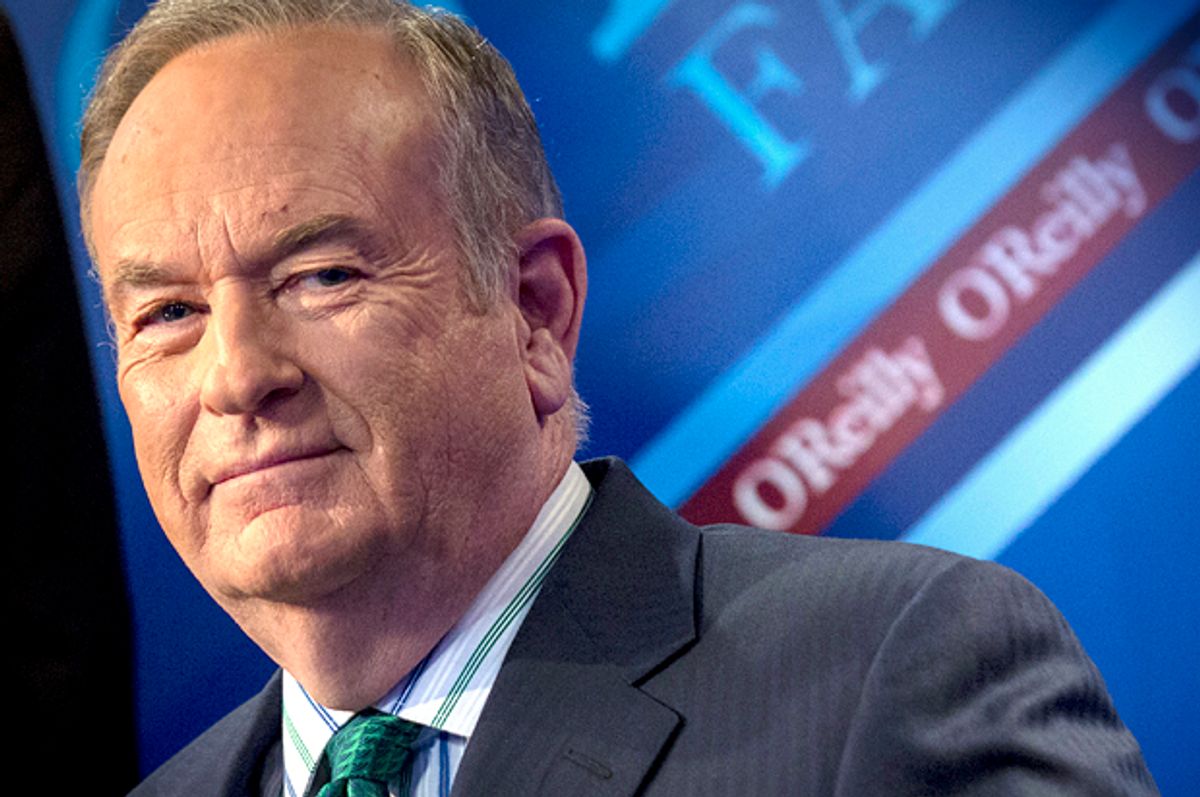 Another week, another hysterical and paranoid Bill O’Reilly rant. What was this weeks major fear? The war on Christianity? The war on Christmas? No, on Monday it was the rising tide of socialism in America that had O'Reilly's blood pressure rising. Indeed, he seems almost positive that socialism (whatever that means) is coming to the United States, and it is all because the populace has become too lazy, and the youths of America are incompetent and rude.

In what began as statement about Bernie Sanders, O’Reilly launched into a tirade about the shifting mores of American society. Of course, he blamed the youngs:

American public school students believe they can slack off in school and then somehow show up in the workplace and make big money. Pipe dream. [...] Millions of Americans cannot even speak proper English. Their concentration spans are so short they can't read a book or magazine article. They speak in crude ways. Sometimes they can't even understand simple directions. How many of us have called a takeout place and had to repeat the order five times.”

O’Reilly’s fear of a shifting society isn’t entirely unfounded. He himself mentions the new New York Times/CBS News poll that was released last week, and the results are quite encouraging for progressives: It found that a strong majority believes our current state of inequality is a major problem, and 57 percent felt that the government should do more to reduce the gap between the rich and poor, while 68 percent favored raising taxes on people earning more than $1 million. Additionally, 61 percent of respondents believed that in today’s economy, “just a few people at the top have a chance to get ahead.” Sixty six percent said that wealth distribution in America is unfair, and should be more even.

It seems like the aggressive and outspoken progressive movement, led by figures such as Elizabeth Warren and Bernie Sanders, is indeed getting through to people. To O’Reilly, however, the current discussion of inequality is a complete sham, designed to undermine capitalism and implement a socialist state. Of Bernie Sanders, O’Reilly said:

“Mr. Sanders is a socialist who does not believe in capitalism. He essentially wants the federal government to regulate the private sector, providing money and assistance to those who are not competitive. And that is the play here. To convince Americans that market competition is bad, unfair, it's a rigged deal. Sadly, that message is gaining currency -- pardon the pun.”

Indeed, Sanders is certainly for regulation of the private sector and providing assistance to the neediest -- but this is not socialism, and Sanders is not a socialist (which is not to say socialism is a bad idea). He is a “Democratic Socialist,” who largely believes in the Nordic Model, the economic system found in Scandinavian countries like Norway, Sweden, Denmark, and Finland, with high progressive taxation, and strong social welfare programs, like universal healthcare. Coincidentally, Scandinavians are consistently found to be the “world’s happiest.”

Of course, O’Reilly and the rest of his Fox News ilk don’t quite care about the difference between democratic socialism or Marxian socialism or a welfare state. His use of the word is not so much about social systems, but about what the word means to so many of his viewers -- much like the words fascism and communism were used during the twentieth century. The right wing seems to have two views of “socialism,” one of them being extremely paranoid, and the other less paranoid. The paranoid view believes that socialism means Stalinesque totalitarianism, and the less-paranoid view pictures mass laziness and a nightmarish bureaucracy. The paranoid view stems from F.A. Hayek’s classic polemic, “The Road to Serfdom,” which proposed that any government planning (he had the New Deal in mind) would inevitably lead to a totalitarian state, which of course did not pan out.

O’Reilly seems to take the latter view, and is positive that the coming socialistic nightmare will arrive because the population has become uneducated and lazy, especially the youths. It is a view that has existed throughout history; an older man complaining about young people, sure that the future is cursed. Fifty years ago, the elderly were complaining about O’Reilly’s generation, and fifty years from now, Millennial’s will be complaining about the youth. This is nothing new. Of course, back when O’Reilly was growing up, McCarthy was targeting anyone who could have been socialist, so maybe he’s feeling nostalgic?

O’Reilly goes on to blame the lack of education in America, seemingly unaware that the Millennial’s are the most educated of any generation, but that there are fewer jobs for them than in the past. “You have to get educated,” said O’Reilly, “That doesn't mean you have to go to college. But if you don't, you have to know how to fix stuff. Or perform some service that people need.”

It so very simple to O’Reilly -- its not because of outsourcing or technological innovation or globalization or the destruction of unions over the past forty years -- no, its because “American public school students believe they can slack off in school and then somehow show up in the workplace and make big money.”

In conclusion, O’Reilly reminisce’s about his childhood upbringing in 1950s suburbia.  “There were nearly hundreds of kids in that neighborhood all over the place. All of the same economic circumstance. Not much money.” This is middle class Levittown he’s talking about, where he grew up comfortably and went to private school, and where black people were not allowed to live.

In summary, the rising tide of progressivism, or socialism, according to O’Reilly, is based on the myth of inequality, which has been sold to the slacking and dependent youth of America. Now for reality. Inequality is no sham, and over the past forty years of neoliberal policies that O’Reilly advocates, inequality has skyrocketed. The top 0.1 percents share of wealth has more than tripled since 1977, from 7.1 percent to 22 percent in 2012, while the bottom 90 percent's share has fallen from 36.4% in the early eighties to 22.8 percent in 2012. Today, the top 0.1 percent owns nearly as much wealth as the bottom 90 percent. It is not only wealth inequality, but income inequality. Since the eighties, most of the gains in income have gone to top one percent, while the rest have stagnated. O’Reilly may be able to ignore this, with his $24 million salary, but the people cannot and will not, no matter how much him and his friends shout socialism.

There are many causes for this hollowing out of the middle class, some that were inevitable, like technological innovation and globalization; but neoliberal policies, embraced by both Democrats and Republicans over the past few decades, and advocated by corporate America, have made it all the more possible. We are living in a divided society, and O’Reilly cannot quite see it from his Long Island mansion. Sure, there are some lazy people here in America, but most people do not end up living in poverty because they are lazy, but because of the lack of opportunity. During the mid-twentieth century, economic policies were much different in America, and so was the class division. Today, taxes have been slashed for the wealthy,  while neoliberal trade deals like NAFTA and the upcoming TPP have helped destroy all stability for working class people. Furthermore, the middle class has been divided because of social and cultural issues spewed by talking heads like O’Reilly. The only way to truly rescue the middle class is for the middle class to once again form an alliance against corporate America. Young people are highly educated and skilled, but the economy does not want them -- it doesn’t matter how many degrees they get. There is only so much an individual can do, before it comes time for the collective to join together, and use their numbers to demand an economy and social system that works for them.