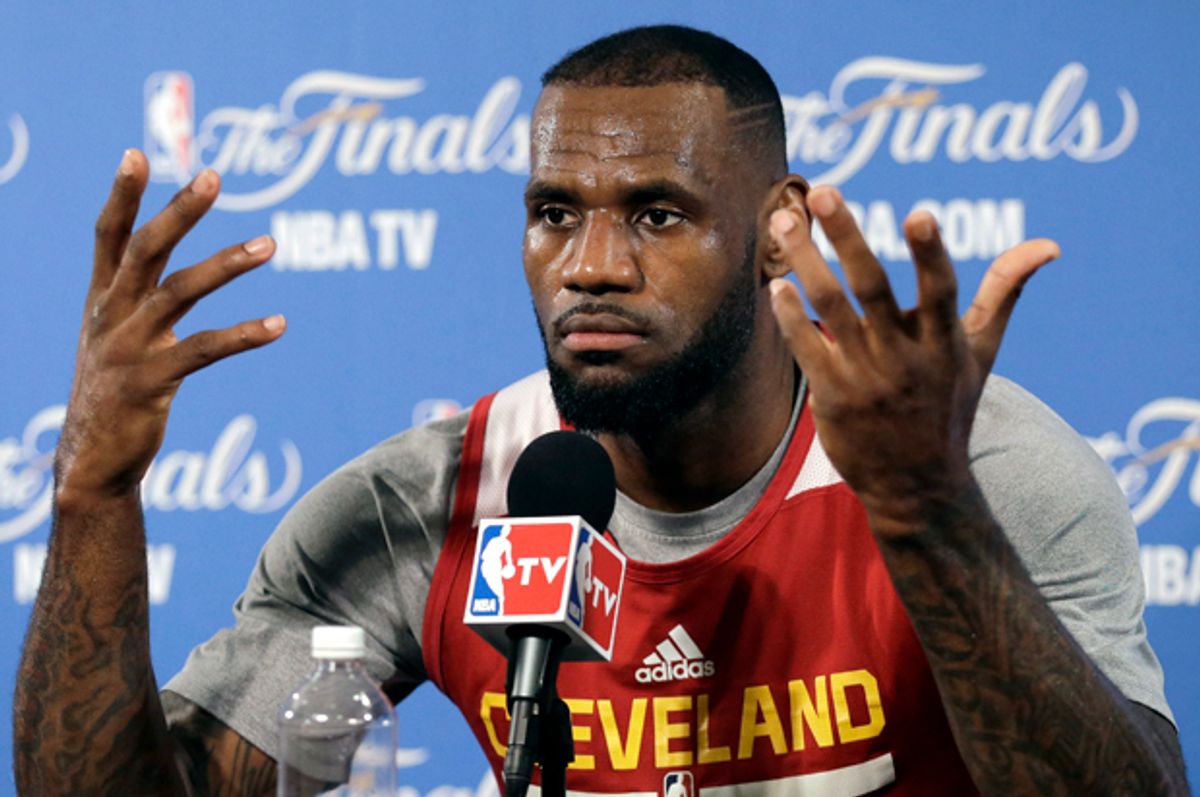 Let me see if I can make this as clickbaity as humanly possible: You'll never BELIEVE what LeBron James has in his shorts! Spoiler: It's his genitals. Huh. That was kind of unsatisfying, wasn't it?

But in a blink-and-you'd-have-missed-it moment before Thursday's Game 4 of the NBA Finals between the Cleveland Cavaliers and Golden State Warriors, ABC caught James adjusting his shorts. I'll let the Pulitzer Prize-winning Associated Press pick it up from here: "As James was getting ready to take the court, a camera moved in for a close-up. James was adjusting his shorts as he started to tuck in his jersey. He briefly pulled down the black compression shorts he wore under his gold game shorts as well, exposing himself to an audience that has averaged about 18.5 million viewers in the first three games of the series." Oh my stars! I do declare I'll be needing a fainting couch and some smelling salts!

Kudos to the outrageously eagle-eyed viewers who swiftly hit Twitter to ask, "Am I the only one that just saw LeBron James flash mini-James?" Naturally, the micro moment soon turned up on Vine, in a clip that's been widely distributed with an NSFW warning but I say you still really have to put in an effort to judge graphic. The best part is simply hearing the well-timed words, "This is approaching historic levels" while the camera briefly lingers on James — followed by the brief, slowed down flash on what, yes, does indeed appear to be a penis where a penis would be. Also great: Watching the loops count in real time. If you're a completist, you might want to check out the simply slowed down version as well.

The reactions were intense. Cosmopolitan called the event "an eyeful nobody was expecting" while Variety dutifully headlined that "ABC Accidentally Shows LeBron James’ Penis During NBA Finals." The story make SBNation and Us and Buzzfeed. Hollywood Life called it "the biggest of wardrobe malfunctions" and mentioned, as a side note, that "He also got injured!"

And of course, social media soon erupted with commentary about the size of LeBron's manhood -- and the reviews have not been kind. But now that I am personally responsible for at least one million of the four million and counting loops the clip has, I feel qualified to say this: don't judge a man's full potential by what happens when he's adjusting his clothes.

I admit that it's always entertaining when the media erupts into the gales of hysteria over a glimpse of a man's body that usually only happen when a woman catches the wrong end of a paparazzi lens. Most days, you have to be a lady for that level of gotcha! excitement. But for the record, James did not "flash" his junk. And further and more importantly, who cares? Why is it such a "shock" that a male human being has a penis? Wouldn't it be shocking if he didn't? It's not like he whipped it out and waved it around and then attempted to use it as a third arm in the game, which, by the way, would make for some truly "historic" television. He adjusted his clothes. His genitals are generally covered by said clothes. I swear, it's not that spectacular an occurrence. And if you're really dying to see a penis, I'm pretty sure you can find an image of one somewhere out there.