A Mizzou spokesman says people are too upset about a half-baked idea. The problem is that this was ever dreamt up 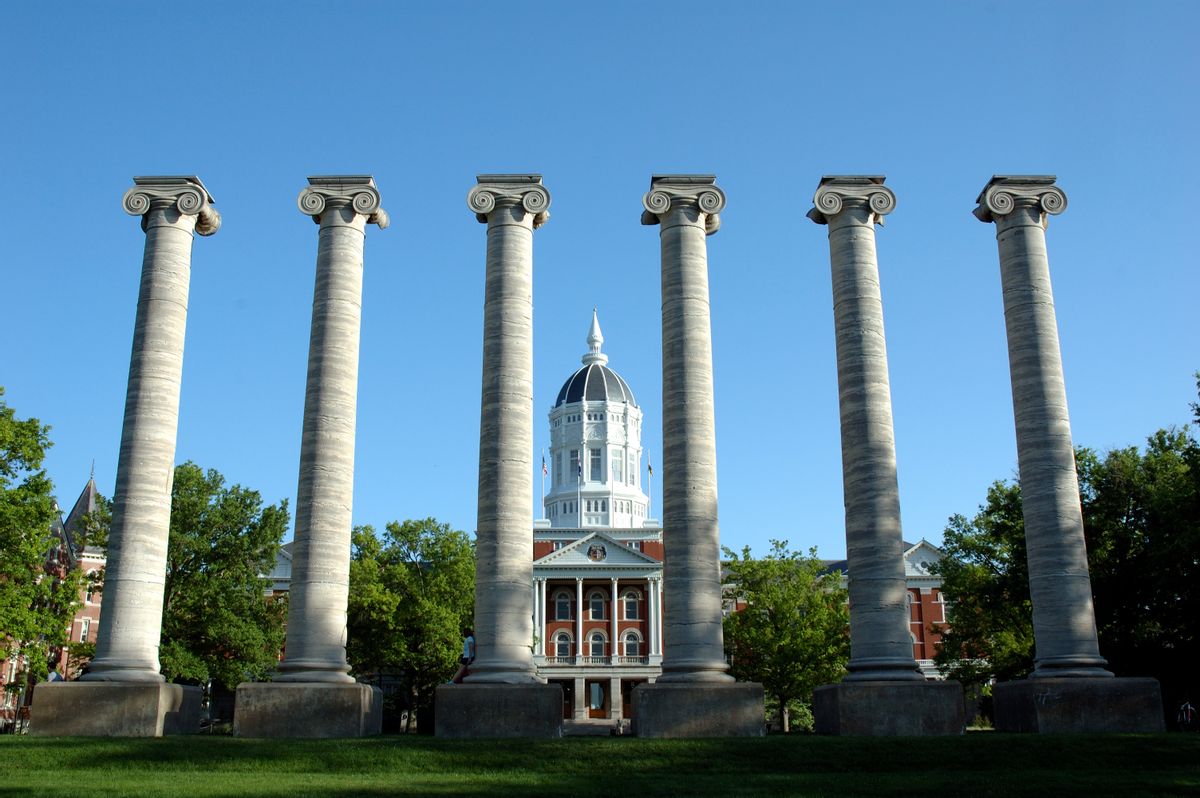 ("University of Missouri - Jesse Hall" by AdamProcter - Own work. Licensed under CC BY 3.0 via Wikimedia Commons.)
--

This year and last have seemed like watershed cultural moments in the fight against sexual assault on college campuses. Anti-rape activism is burgeoning among students at some of the country's largest and most elite institutions of higher education, and has done a rather successful job of highlighting how often, and how shamefully, schools mishandle reports of sexual violence. It has begun to force campus administrators to confront "the problem" and take real steps to prevent abuse.

Too bad some of them are fucking up so royally.

The University of Missouri-Columbia provides today's example. After seeking out recommendations for ways to improve student safety at campus Greek organizations last year, Mizzou chancellor R. Bowen Loftin is considering a proposal to ban women from fraternity houses between the hours of 10pm and 3am on weekends, in an ostensible effort to combat sexual assault. It's the epitome of "missing the point," but also pretty much exactly what I mean when I use the phrase "fucking up royally."

The proposal, dreamt up by the Mizzou Fraternity Alumni Consortium advocacy group and leaked online recently, also includes provisions to ban all alcohol except beer from fraternities, drug test students who live in frat houses and forbid organizations from hosting events outside the city of Columbia. Criticism has been sharp, swift, and comprised of an odd unanimity between groups that are often at odds. Anti-rape advocates and Greek organizations alike have challenged the proposal as misguided and potentially ineffective, with the university's Panhellenic Association, in particular, coming out strongly against the idea of banning women from frat houses.

“The goal is to address the safety of women students in fraternity houses, but the proposal was written by men who are not entrenched in daily campus, fraternity and sorority life,” the association wrote in a letter to Loftin. "[R]estricting women from certain locations under the guise of safety, lends itself to the notion that women cannot make choices for themselves about their own safety.”

If only that were the whole problem. In addition to (once again) placing the onus of preventing sexual assault on women — by suggesting they be sequestered, that their choices and actions be policed so as to keep them out of harm’s way — the proposal actually does a decent job of highlighting the conditions that commonly contribute to sexual violence on college campuses. Then it just ignores them.

Ted Hellman, a spokesperson for the consortium that drafted the proposal, told the St. Louis Post-Dispatch that it was "unproductive" for critics to oppose so virulently suggestions that have not yet been finalized, telling people to "stay calm." “People are getting all riled up over old and incomplete information,” Hellman said. “Student safety is a significant issue, and the chancellor is trying to be proactive. I think he should be applauded for that.”

That is the problem — well, part of it. The fact that the consortium even considered a ban on women’s presence at frat houses to be worthy of writing down, or to be anywhere on the spectrum of productive ways to prevent sexual assault, is the problem.

The very idea betrays the university’s belief that sexual violence is inevitable, that “boys will be boys” who can’t help but rape female guests when they come over. It betrays a belief sexual assault is something that only happens to women, and that it only happens at frat houses between the hours of 10pm and 3am on the weekends. It illustrates the sort of misunderstanding of sexual violence that not only prevents schools from doing anything meaningful to stop it, but that allows a victim-blaming rape culture to flourish as well.

Mizzou’s Greek organizations will have the chance to weigh in on the proposal at an invitation-only campus meeting on June 20, where tensions are expected to be high. A number of students have already taken to social media to speak out against the recommendations and urge Loftin not to approve them.

But as we’ve seen already, students’ voices aren’t always loud enough in a broken system that prioritizes quick fixes for solving deep, ugly problems. In that system, it’s always going to be easier to tell women to stay home on a Friday night — because there’s no real understanding of the bad things that might happen if they don’t.