Think you're a fan of Dany's dragons and Jon Snow's scowl? Madonna, Snoop, even Anna Kendrick have you beat 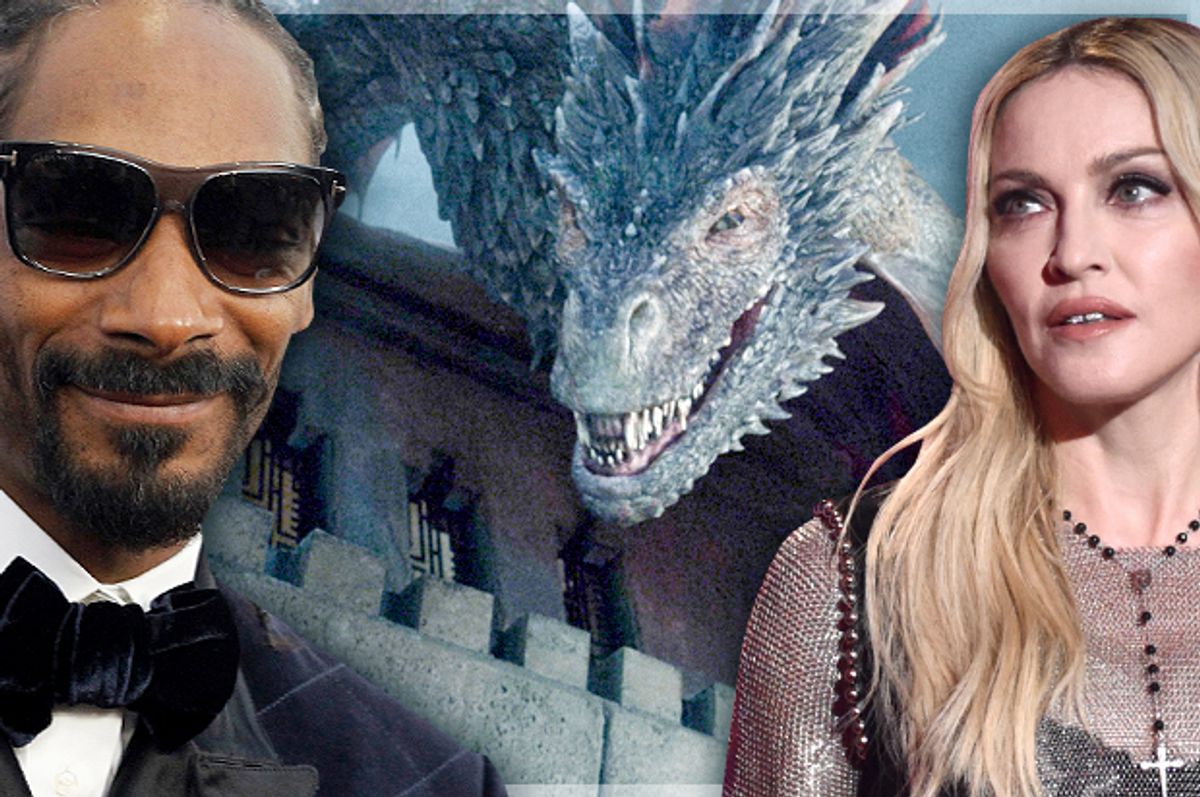 The “Game of Thrones” finale airs this weekend, and chances are you’ll either be watching it alone, hands splayed anxiously across your eyes as you prepare for the newest episode of child-murdering horror, or perhaps settling in for a viewing party with a bunch of run-of-the-mill, non-famous friends. But all across the country, much more famous “Game of Thrones” fans than you will be sitting at their TVs, gasping at Daenerys’ cool-ass dragons, laughing at Tyrion’s quips and crying at, well, you know, all the awful stuff. Celebs, they’re just like us!

In honor of the many celebrity "Thrones" fans out there, we’ve put together a list of the biggest fans who we’d invite along for our dream finale viewing party. Come join us, guys! I’ll make nachos!

1. Madonna
No surprises here, but Madonna might be the world's most talented “Game of Thrones” cosplayer -- she even borrowed Emilia Clarke’s Daenerys costume to wear to a Purim party. The downside is no matter what you choose to wear, she will upstage you. Classic Madge.

2. Dax Shepard and Kristen Bell
Not only will these two also likely show up in costume, they may try to train your party guests to speak in High Valyrian. In an interview with People, Shepard confessed “We're big 'Game of Thrones' fans, so we've trained [our daughter] to say, 'Winter is coming.' And, 'You know nothing, Jon Snow.' These are catchphrases of hers. You know, standard stuff like that.”

"What was your baby’s first word? ‘Dada?' That's cool, our daughter's was ‘Valar Morghulis.’"

4. Seth Rogen and Snoop Dogg
Not only will they recap the previous week’s episode for you, they will bring weed! So. much. weed.

5. Kerry Washington
Washington definitely gets an invite, because she will probably cook up a whole “Game of Thrones”-themed feast for your guests. Her parents -- who sounds awesome -- are also invited.

6 Ryan Reynolds and Blake Lively
These two are always lovely to have around, but watch out — sounds like Reynolds takes the on-screen action very seriously (also, spring for the cable package so he doesn't get you arrested for illegal torrenting).

As Lively put it: "My husband, I'm outing him and I shouldn't, but he became obsessed with ["Game of Thrones"]… He did everything he could to pirate episodes that hadn't even been shot yet. So that was a little tough point in our marriage."

7. Elijah Wood
You'd think that being in a major fantasy epic himself, Wood might be a bit immune to the whole fanboy business. Well, apparently not -- in an interview with Conan, Wood revealed that he is such a diehard "Game of Thrones" fan that he spent much of a flight to Ireland humming the theme song out loud, and then, upon arrival, managed to not only visit the set but also to nab a seat on the Iron Throne. He's definitely invited to the party, but only if he promises not to be a drama queen about sitting in a regular old armchair.

8. Retta
We imagine Retta would be fun to watch anything with, although it could be kind of distracting if her live commentary is as animated as her tweets.

9. Anna Kendrick
Kendrick, meanwhile, is the perfect person to commiserate with about the underwhelming lack of male peen on the show. Daario Naharis, your presence is requested in the, um, sword room.

Also, we hope she brings her snuggle!

10. Jay Z and Beyoncé
Did Jay Z actually give Beyoncé one of Khaleesi’s dragon eggs as a gift, as rumored? Will he bring another one to the party? Will he bring snacks? The night is dark and full of surprises, guys!