The chapter president allegedly passed herself off as black for years 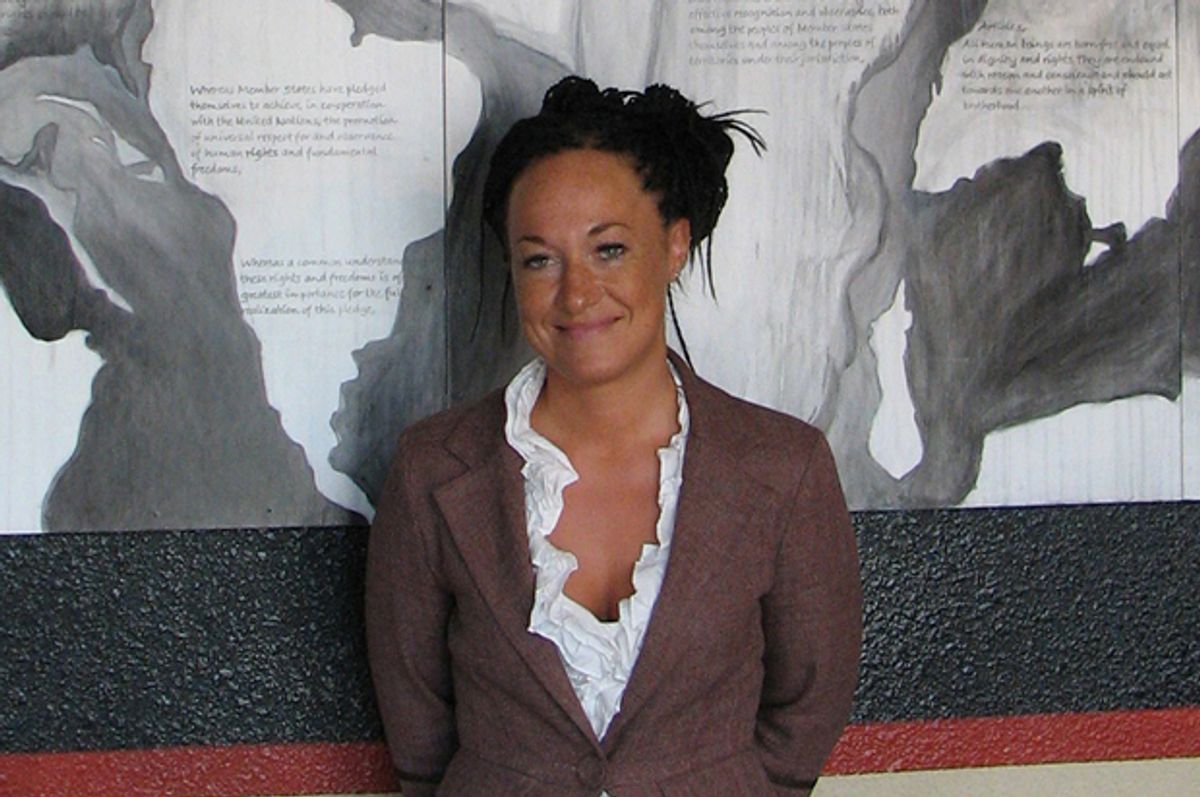 It should already be abundantly clear that the still emerging story of Spokane NAACP leader Rachel Dolezal is not your typical tale of everyday cultural appropriation. Dolezal, who's been chapter president since January of this year, is also a part-time professor in the Africana Studies Program at Eastern Washington University and chairwoman of the city’s Office of Police Ombudsman Commission. She's come under intense scrutiny since Thursday, when her parents came forward to say that the 37 year-old had been deceptively posing as African American. But while her story is extraordinary, it's not her behavior that's going to be worth noting right now. It's the amount of ridiculous, excusing commentary we're going to be subjected to about it. So let me just say now, as a white woman who, like Dolezal rather conveniently says, can acknowledge "We’re all from the African continent" -- that is some next-level white privilege BS there. Chet Haze, you have been wildly outdone.

As the Seattle Times reports, Dolezal now says "I feel like I owe my executive committee a conversation" about what she says is a "multi-layered" issue. "That question is not as easy as it seems," she says. "There’s a lot of complexities … and I don’t know that everyone would understand that."

But in an interview that aired on KLXY Thursday, when asked directly, "Are you African American?" she replied, "I don't understand the question," and asserted that a Facebook photograph of an African American man "is my dad." But when pressed, "Are your parents white?" she took off her microphone and walked away so quickly she left her purse and car keys behind.

Maybe if this story hadn't blown up at such a unique moment in our cultural history — a moment when transgender rights are gaining unprecedented visibility while we still, tragically, have to say the words "Black lives matter" as if that should ever be up for discussion — Dolezal's apparent ruse would not be sparking the conversation it has. But social media is already seizing on the debate over whether someone who "identifies as black" can be "transracial." As a commenter on the Spokesman Review asked, "What's wrong with identifying as a different race? Obviously she's probably felt for years that she was black on the inside and denied it all through her childhood. I mean look at her education and profession. She's obviously 'transitioned' and able to share it with the world. I would think since she's transitioned and identifies herself as black, than we should just let her be and live her life in peace." Let me help out here. No.

What you do with your hair is totally your business. And Dolezal still has supporters. Spokane NAACP’s Criminal Justice Committee chair Cedric Bradley told Inlander Thursday, "In my opinion, it wouldn’t make a difference to me. It’s not about black and white, it’s about what we can do for the community."

But based on what is currently known about Dolezal, this is not a case of feeling more comfortable within a different culture. The Chicago Tribune reports that "Rachel Dolezal has said she has biracial parents, was abused by a step-father, and lived in South Africa as a child. Her parents say they are white. They also say she never had a step-father, and though the couple did live in South Africa, it was from 2002 to 2006, it was after Rachel had left the house and married." And the Washington Post notes that her father told them that "When Rachel applied to Howard University to study art with a portfolio of 'exclusively African American portraiture,' the university 'took her for a black woman' and gave her a full scholarship." The family also says that she has claimed that her now 21 year-old adopted brother, who is African American, is her son.

The city of Spokane, meanwhile, is looking into whether she misidentified her race on her Ombudsman Commission application. She also has a lengthy history, going back several years, of claiming she's been targeted for hate crimes. Just this week, KXLY4's Melissa Luck reported on Dolezal's alleged problems, including one in which she told authorities "Someone had threatened her at work about her ethnicity." She also claimed she'd received hate mail earlier this year. A police report indicates "the initial package Dolezal reported receiving did not bear a date stamp or bar code… it was either very unlikely or impossible that the package could have been processed through the post office, and that the only other alternative was that it had been put there by someone with a key."

So this isn't about being an ally, or making the family of your choosing, or even how one feels on the inside. It's about, apparently, flat out deception. It's about how one person chose to obtain a college education and jobs and credibility in her community. It about allegedly pretending to speak from a racial experience you simply don't have. You want to live your truth, that's not how you go about it. And it's an insult to anyone honestly trying to do just that to suggest anything otherwise, for even a moment.