The fall and rise of Rupert Murdoch: How the world's most ruthless mogul salvaged his media empire

In 2011, things couldn't have been worse for the media baron. Now he's going out on his own terms 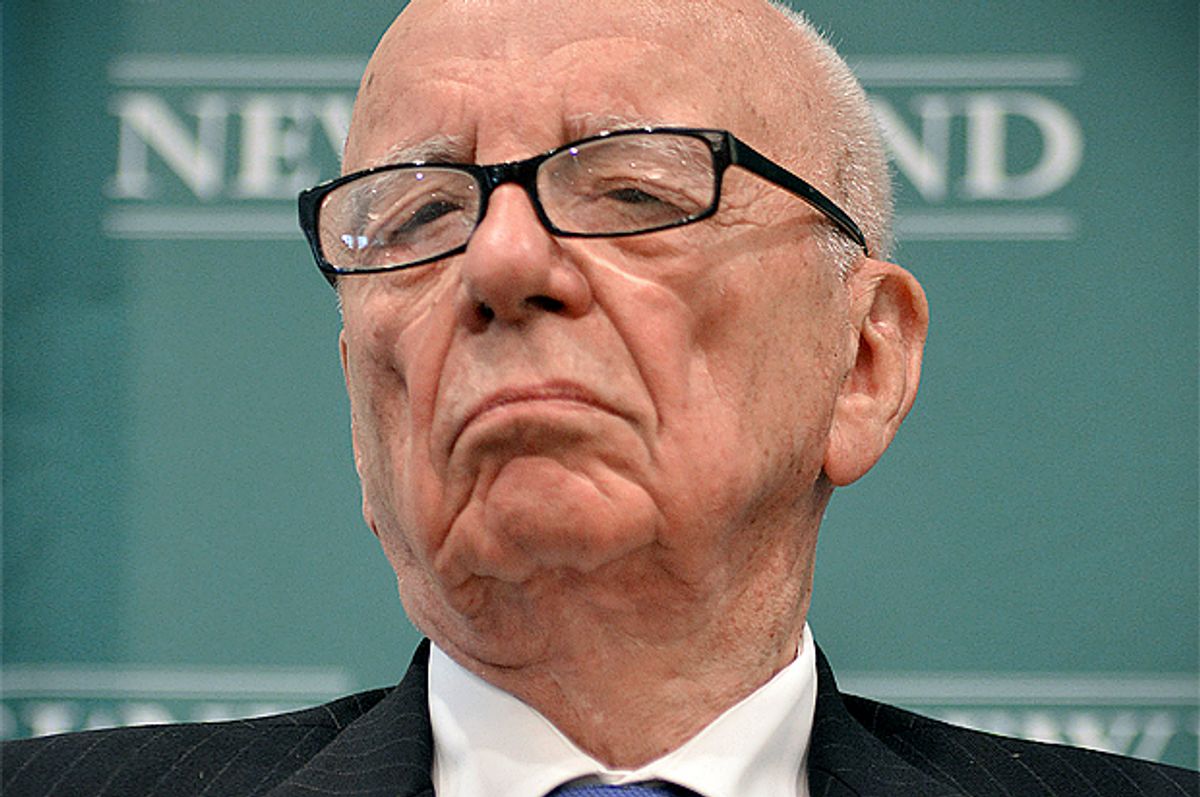 Rupert always wins in the end.

That's the main lesson to draw from Wednesday's news that Rupert Murdoch will formally hand control of his media empire to his sons, James and Lachlan. The elder Murdoch will stay on as executive chairman of both 21st Century Fox and his publishing company, News Corp., but James will become the CEO of 21st Century Fox and Lachlan will become a "co-executive chairman" and run the business as a "partnership" with James, according to CNBC. (News Corp. is technically run by Robert Thomson, but the family maintains an iron grip on both properties, so the handoff to James will extend there too.)

The move ensures that, absent some major shakeup down the line, the Murdochs will be running things at Fox for a long time to come. That may not seem too surprising, but it represents a monumental triumph for Rupert Murdoch—perhaps the greatest comeback in his long history, given that not too long ago it was a real question whether he or his family would be able to hang on to the company that they'd built.

It was only in 2011 that News Corp.—then a single company spanning both entertainment and publishing—was plunged into the worst crisis in its history when the Guardian revealed that one of Murdoch's British tabloids had hacked into the phone of a missing teenager. The girl, Milly Dowler, was one of thousands to have their privacy violated in this way. The ensuing scandal saw that paper, the News of the World, shut down. Murdoch then abandoned his attempt to purchase the entirety of lucrative satellite broadcaster BSkyB. Key executives were indicted. The FBI got involved. Shareholders, so used to giving Murdoch a free hand, became increasingly restless about the way he ran a multinational behemoth like a private toy.

More troubling for Rupert Murdoch, though, was the turmoil the phone hacking scandal unleashed within his family. He had always intended to pass News Corp. on to his children, but suddenly it seemed like that might not be possible. James, long seen as the heir apparent, was deeply tainted by the scandal, since he had been running the British newspaper division. He had to resign his post, and most observers felt that he was too damaged to ever be able to take over. Lachlan, meanwhile, had long since decamped to Australia and distanced himself from the company. He seemed very happy for that state of affairs to continue. Rupert's daughter, Elisabeth, openly turned on her family in a public lecture. There were reports that the clan was so divided that they had to go to counseling together.

To put it mildly, things could have been better for Rupert Murdoch. The legions of people who loathed him for Fox News, the New York Post and the Page 3 girl -- and hated his open use of his media titles for the purpose of twisting political arms -- now finally felt like there was a chance that he would get what was coming to him.

And then ... nothing happened.

Well, that's an overstatement. A lot happened. Rupert split his company in two, finally appeasing investors who were sick of propping up money-losing newspapers with the profits from movies. He collaborated with British police against his own journalists, turning over mountains of documents that helped them arrest scores of his employees. News Corp. was forced to pay hundreds of millions of dollars in settlements, as the huge scale of criminality in his British newspaper operation was revealed.

But in a larger sense, the scandal wound up changing very little. Rupert maintained his grip on his company. The money, especially at 21st Century Fox, kept rolling in, which really helped silence anyone with moral qualms. Any angry shareholders found themselves sidelined. The FBI backed off. The blame for phone hacking fell on lower-level executives, with the Murdochs left untouched.

In the end, things were how they always are—a very rich and very powerful man got away with it. Rupert Murdoch is not special in that regard, but he is an especially ruthless and wily survivor who nearly always finds a way to have things work out in his favor.

Last year, Murdoch celebrated an even sweeter victory: the return of his sons to the fold. He appointed James and Lachlan to senior positions in his two companies, ensuring that the day would soon come when they would officially take over from him. That day is now here, and Rupert Murdoch must be laughing at how, yet again, he's proven the prophets of doom wrong. Really, we were probably all insane to think it could ever have turned out any other way.