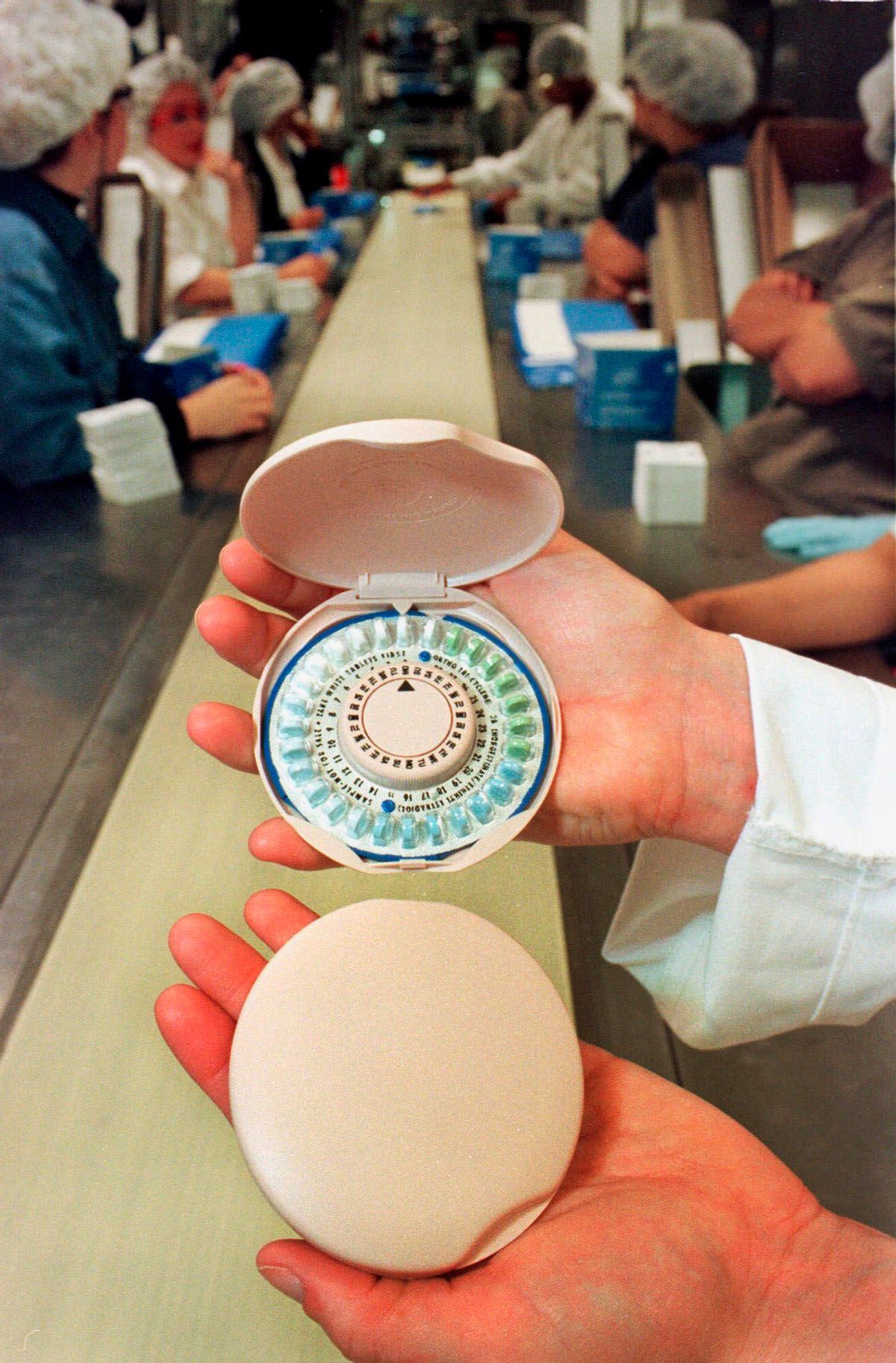 Over-the-counter birth control has always struck me as a weird thing for Democrats and Republicans to agree on. Given the war on reproductive rights overwhelmingly endorsed by GOP politicians, it would seem as if making contraception more widely available -- which would necessarily happen if the pill were to be stocked on CVS shelves, perhaps between the allergy meds and tampons -- would run contrary to the party line.

Of course, the GOP’s endorsement of over-the-counter birth control is actually just a thinly veiled attack on the Affordable Care Act -- specifically the healthcare law’s contraceptive mandate, which requires insurance companies to cover birth control at no cost to women. A number of Republicans, notably Colorado Sen. Cory Gardner, have endorsed over-the-counter birth control in an ostensible effort to deflect from their records of being openly hostile to reproductive healthcare, but also as a way of debilitating a crucial element of ACA.

Their support is for making birth control more widely available, by allowing women to buy it at pharmacies without a prescription pending FDA approval. But it’s not necessarily support for making contraception more accessible, which is the true benefit of low- to no-cost sharing.

To counteract the gaps in Republican measures regarding over-the-counter birth control -- specifically Gardner’s Allowing Greater Access to Safe and Effective Contraception Act -- Washington Sen. Patty Murray (D) introduced legislation this week that would handle any questions about coverage should the FDA approve certain forms of contraception for over-the-counter use.

"The law would make sure when the FDA determines a birth control pill is appropriate for routine daily use ... insurance has to cover it," Murray said of her law during a press conference this week. "The Republican approach of access without affordability is like handing someone a single shoe."

Murray’s bill would ensure that the ACA apply to birth control purchased in pharmacies without a prescription -- but that’s only if and when that option becomes available. And, for the moment, it’s not.

But, as I wrote earlier this week, some states are considering a related alternative to over-the-counter availability: pharmacist-prescribed birth control. California, which will begin allowing pharmacists to prescribe the pill in coming months, is the first state to make a wider array of healthcare workers the gatekeepers to contraception, effectively increasing access for thousands of women. While the state is still keeping birth control behind the counter -- and, by necessity, available only with a prescription -- the option to receive it without going to the doctor is huge.

But allowing women to avoid regular physician visits also raises concerns among some healthcare providers. To understand the drawbacks of the California law and over-the-counter birth control in general, I spoke with Dr. Kathleen Morrell, a New York-based OB-GYN, who explained why she and others in the medical community -- including the American College of Obstetricians and Gynecologists -- support wider availability of birth control in pharmacies, whether it’s prescribed by a pharmacist or sitting on a shelf. Our conversation has been condensed and lightly edited for clarity.

I want to start out by talking about the California law, and get to the broader issue of pharmacists prescribing birth control over-the-counter, and how this has been politicized.

For starters, the major pro is that [over-the-counter birth control] just increases access, specifically when it comes to the pill -- which is still the No. 1 used reversible form of birth control by women in this country who are actually choosing some form of contraception; it is still the No. 1 method other than sterilization. So, certainly, for many women it will improve their access and give them one less barrier to using something, and therefore it would potentially have a positive effect on the never-changing unintended pregnancy rate in this country. In fact, there has been some research showing that this could potentially impact the unintended pregnancy rate by just having contraception available over-the-counter.

The potential pros of involving the pharmacist is that it could then potentially allow for a woman’s health insurance to cover it. I think one of the reservations a lot of us have is that we don’t want birth control to just be over-the-counter, period. If that happens, then all of a sudden you go from this amazing Affordable Care Act, where women are now paying a low cost-sharing with their birth control methods with zero deductible, back to a place five years ago, even three years ago, where women were still paying out of pocket. What it seems to me, based on what I’m seeing, is that this could potentially be a very valuable workaround that allows women greater access with fewer barriers, while also making sure that barrier atop is not put back up.

And that was one of the things that got politicized-- there were a lot of Republicans suggesting that birth control should be over-the-counter as a way of circumventing the Affordable Care Act’s contraceptive mandate. What is the ideal situation here, as far as access goes, with over-the-counter contraception availability and having pharmacists prescribe birth control? What does that look like?

I think the ideal access is that a law like the one in California would allow women to not have to work around the schedule of their physicians, and that if something happens to their birth control, or if they decided that they want to have birth control, they don’t have to wait to get to their doctor's office or wait for an appointment. All they would have to do is walk into any pharmacy, which has much more accessible hours than a doctor’s office frequently does. So this would be one step in the right direction of women having faster access, and reducing the likelihood of unintended pregnancy for themselves.

This law is in California, which hasn’t had the same sorts of laws directed at restricting abortion access and shutting down clinics. Clearly we’re not talking about abortion, we’re talking about contraception, but those two things are very much alike when it comes to women going to healthcare providers and actually receiving birth control. If this law were to go into effect in states like Texas, which has seen dozens of clinic closures in the last year, what do you think that would look like?

Unfortunately, the same states that have highly restrictive abortion laws tend to also have pretty poor rapport with women’s reproductive healthcare. There’s constant legislation I’m seeing and hearing about where funding is being cut, and access is being decreased, particularly for poor women -- who we know are at the highest risk of unintended pregnancy in the country. So I would like to think that anything like this California law, which would improve access, would improve access for everybody. So any kind of decrease there is, to the barriers of both access and cost -- as long as those two things go hand in hand, you’re going to see an improvement in women’s abilities to control their contraceptive choices and therefore actually decrease their rates of unintended pregnancy.

Could you speak to what role the ACA mandate plays in women’s ability to access birth control?

When the Guttmacher Institute had put out their numbers, in a research project last year, early in the pre/post-Affordable Care Act they were looking at the percentage of women who were paying out of pocket. It showed that, for the pill, it went from 15 percent of women having access to it to 40 percent -- and that was over a year ago that they did the research, so it’s bound to be higher a year later. So when you look at older reproductive stuff, it shows the average woman spends $16 a month on birth control, but that was probably written before the Affordable Care Act, so that number is probably lower now. The only thing women are paying is whatever their insurance premium is, because after that women are getting their pills with no additional costs. I think a lot of people are attacking [Republicans’ birth control access bill] because it’s about getting it over-the-counter, it’s not about the protections for cost, and that’s really the main concern. We don’t just want stuff over-the-counter because we want stuff over-the-counter -- we want people to have insurance coverage for it. If you make it over-the-counter but the ring is still $100, for example, that doesn’t mean it’s accessible.

What are some of the drawbacks of the California law or of over-the-counter birth control generally? I know there’s some concern that women might not go to receive preventative care at their doctors’ offices and clinics.

That’s certainly something that we’d be concerned about as physicians, that someone would use it to replace preventative care. But I think women are smart, and I think women understand what they need, and if birth control is all they need right then and there and they don’t want to come to us for anything else, then we should at least not become a barrier by saying, “You have to come and see me at the doctor's to come and get this contraception.” Women are smart, and we should trust them to know what’s right for them, and I don’t think being a barrier to their contraceptive needs is the right way to go as providers.

The whole point, at the end of the day, is that we want women to be healthy, but we also do have to trust them to know what that means for themselves. Certainly, if this became a country-wide thing, and everyone was doing it, it would be much easier to then understand how over-the-counter birth control would affect women’s interactions with the medical care community. And we would then just have to change the way that we talk to women about it, to understand where a doctor is appropriate, and why they need to come and see us for STD testing, or for pap smears, et cetera. But I think we should be able to mold what we do as a medical field to what women’s needs are.