10 companies that are openly contemptuous of their customers

Cable companies, insurance providers and airlines are famous for awful customer service. Some are worse than others 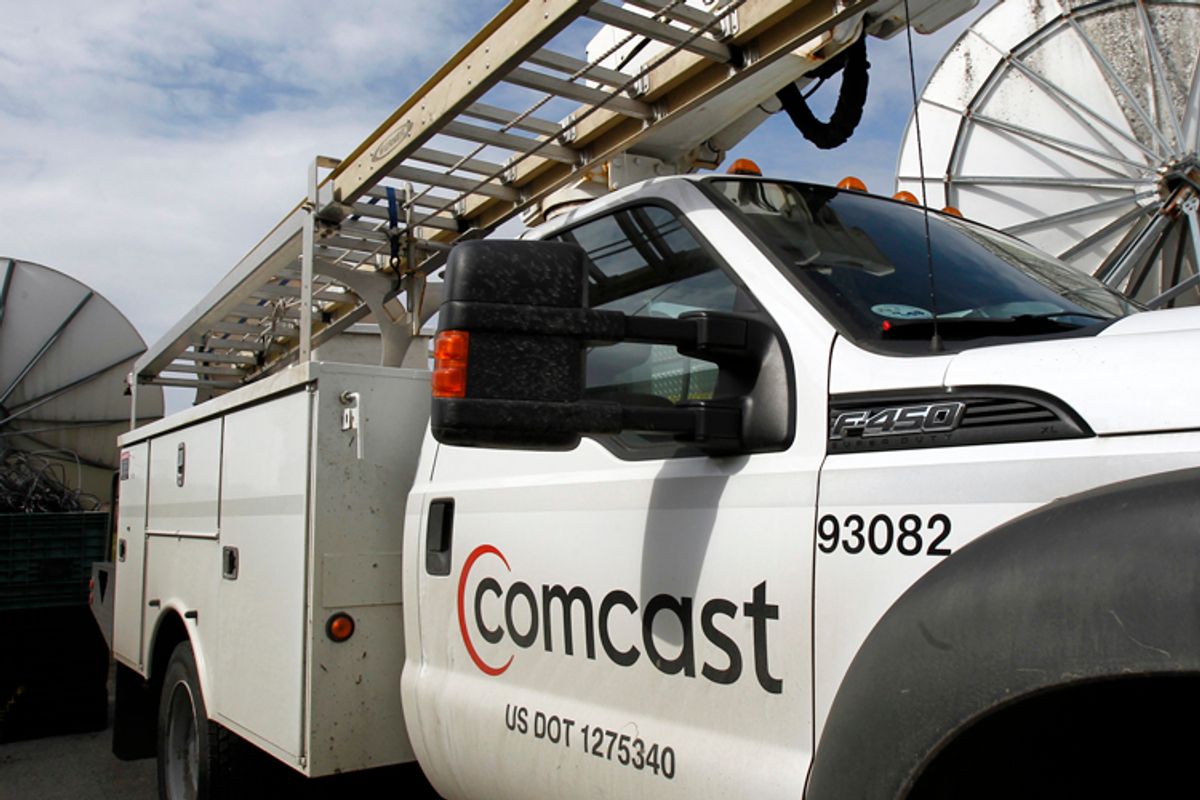 Recently, Comcast customers in Philadelphia were invited to share their thoughts on the cable television giant. One Philly resident after another described Comcast as an appalling combination of high prices and terrible customer service: customers billed for services they didn’t order; repair people not showing up; long amounts of time spent on hold.

Comcast's less-than-stellar reviews should surprise nobody. In Philly and elsewhere, Comcast is a monopoly, and when a company is allowed to dodge competition and become a monopoly, customer service inevitably suffers. From cable television to banking to air travel, major corporations get away with offering abysmal customer service because they have done everything imaginable to squelch competition and rig the game. The U.S. Supreme Court’s disastrous 2010 decision in Citizens United v. the Federal Election Commission made matters worse by encouraging giant corporations and their lobbyists to give unlimited contributions to politicians—both far-right Republicans and neoliberal Democrats—and ensuring that they will be as submissive as possible.

Below are 10 major corporations that are infamous for terrible customer service and just so happen to have a strong aversion to competition.

Cable television subscribers dodged a major bullet when Comcast’s proposed merger with Time Warner Cable fell through earlier this year. Even so, Comcast remains the largest cable television provider in the U.S. In both 2010 and 2014, Consumerist named Comcast “Worst Company in America” thanks to its ever-increasing prices and endless stream of consumer complaints. And year after year, Comcast finds itself at the bottom of the American Consumer Satisfaction Index (ACSI). In a free-market system, customers who are treated badly should be able to take their business elsewhere. However, that’s easier said than done when options are so limited. In Philadelphia, the alternatives to Comcast are satellite television via DirecTV and FiOS broadband and/or Internet television via Verizon (which still services DSL broadband in Philly but has been aggressively encouraging its Philly customers to switch to FiOS). That is not a genuinely competitive market. If one wants cable TV (as opposed to satellite or Internet TV) or cable broadband in Philly, the Comcast monopoly is unavoidable.

In early 2013, Time Warner, the U.S.’ second largest cable television provider, announced it was launching a $50 million ad campaign in hopes of winning back customers it had lost, including 140,000 subscribers in 2012’s third quarter. Clearly, Time Warner was worried about customers switching to DirecTV for television or from cable broadband to Verizon FiOS for their high-speed Internet needs, but when it comes to cable, Time Warner dominates the market in many areas, and that lack of real competition has resulted in terrible customer service. According to ACSI, Time Warner Cable has ranked consistently low for customer satisfaction.

Deceptive marketing and misleading promotions are a common complaint with Time Warner Cable. In January, New Networks Institute filed a complaint against Time Warner and Comcast with the Federal Communications Commission and called for an investigation of the companies’ billing practices.New Networks Institute examined the long list of charges of typical Time Warner Cable bills and asserted that they were ridden with questionable or bogus fees; for example, one October 2014 triple-play bill from Brooklyn totaled $190.77 and was 112% higher than the $89.99 Time Warner was advertising for triple-play. New Networks’ complaint noted that between 1992 and 2014, Time Warner’s cable television prices in Brooklyn had increased by 306%, an increase the complaint attributed to a lack of competition.

As some of Verizon’s FiOS customers see it, the telecom giant does have one redeeming quality: it isn’t Comcast. In May, Verizon agreed to pay a $90 million penalty after the FCC and the Consumer Financial Protection Bureau went after it for cramming, the unethical practice of adding unauthorized third-party charges to a customer’s bill in exchange for a commission. The cramming charges, which show up on the bill as a fee or tax, could range from a few cents to several dollars. Yet cramming is only the tip of the iceberg where Verizon’s mistreatment of customers is concerned. In 2014, Verizon Wireless agreed to pay $64 million to settle a class-action lawsuit for overcharging wireless customers, and in 2010, overcharging customers resulted in a $25 million fine from the FCC (Verizon agreed to pay refunds of between $2 and $6 to about one in six customers). Forbes Magazine contributor Joan Lappin echoed the frustration of millions of Verizon customers when, in a 2012 article, she complained: “you had best budget an hour for any call to Verizon, no matter what the topic.”

In 2012, Lifehacker.com conducted a survey on customer service and compiled a list of the five worst companies. Comcast, not surprisingly, came in at #1, and #2 was AT&T (the other three were Time Warner Cable, Verizon and PayPal). The most common complaints included slow data connections, dropped calls and billing errors. And if customers grow fed up with AT&T’s poor service and decide to go elsewhere, it comes at a heavy price: another major complaint was AT&T’s exorbitant fees for early termination. In May 2010, AT&T announced that with “advanced, higher end devices” such as smartphones and netbooks, early termination fees could be as high as $325, depending how far into the contract the customer was. With “basic and quick messaging phones,” AT&T’s early termination fee was “only” $150. Such fees are prorated, so a customer who is 18 or 19 months into a 24-month contract would pay a lower termination fee than someone who cancels after four or five months.

In the U.S., there have been so many mergers that only four airlines—United, American, Southwest and Delta—now control 85% of domestic air travel. The result of all this consolidation: higher fares and worse customer service. According to the Department of Transportation, airline-related complaints increased by 26% in 2014. The number of lost or delayed bags increased by 17% between November 2013 and November 2014. And the larger United has become, the more customer service has suffered. In a November 2014 commentary for the New Yorker, Tim Wu listed a variety of ways in which the United/Continental merger had been terrible for consumers, from soaring baggage fees to ruder flight attendants to escalating fares (some as much as 57% higher on routes that became uncompetitive thanks to the merger).

Wu noted that baggage fees “soared to as high as $100” and that “change fees, which have always been outrageous, grew higher: $200 for domestic, $300 for international.” Wu was also critical of how United’s new pre-boarding policies affected people with small children. Wu complained: “I suppose that everyone has his breaking point. For me, it was while trying to pre-board an overcrowded flight to Miami with a noisy baby in my arms, only to be ordered back in line by a curt agent. At that moment, I realized that United had quietly eliminated the traditional practice of pre-boarding ‘passengers with small children,’ choosing to favor a few elite fliers over the convenience of everyone else.”

Wu, who described the merger as a “consumer sinkhole,” is not the only one complaining. In its 2014 report, "The Unfriendly Skies: Five Years of Airline Passenger Complaints to the Department of Transportation," the consumer-oriented OSPIRG Foundation described United as “one of the most complained-about airlines.”

If one dislikes the customer service at United, American Airlines isn’t likely to be much better. According to OSPIRG’s report, American “has generated increasingly more complaints per 100,000 customers since 2009” and “is now one of the most complained-about airlines.” Canceled flights were a common complaint in OSPIRG’s report, while “other top problems were about baggage, customer service” and “issues with reservations, bookings, and boarding.” A big part of the problem is American’s size: it became the largest airline in the U.S. when, in 2013, it merged with U.S. Airways. American, U.S. Airways and America West used to be three separate companies that were competing with one another; now, they are one big company and consumers are the losers.

On May 6, Vermont Sen. Bernie Sanders unveiled a bill that calls for breaking up the largest banks within a year, including Bank of America. Sanders’ bill has zero support from Republicans in Congress, but the very fact that he is making such a proposal is a plus. BofA, one of the behemoths that was considered “too big to fail” during the Panic of 2008, has been allowed to keep growing larger, and the larger it becomes, the worse its customer service gets. In March 2013, the Wall Street Journal reported that nearly one-fourth of all consumer complaints CFPB was receiving were BofA-related. And more than once, BOA has made the top three in Consumerist’s annual Worst Companies in America poll. A common complaint is all the fees the bank charges, from overdraft fees to minimum balance fees for basic checking and savings accounts. A $12-per-month fee for balances below $1500 can add up to $120 per year. BofA is the bank that, in 2011, planned to impose a $5-per-month fee on debit cards but backed down because the outcry was so vehement. In 2013, the CFPB found that BofA accounted for 30% of mortgage-related complaints in the U.S. Two-thirds of those complaints, CFPB found, involved debt collection, loan modifications and foreclosures.

In May, two major lawsuits were filed against Wells Fargo: one in a federal court, the other a state lawsuit filed by Los Angeles City Attorney Michael Feuer. In both lawsuits, Wells Fargo is accused of exploiting customers by opening unwanted accounts in order to generate fees. Matthew Preusch, an attorney in the federal case, alleges: “We have heard from Wells Fargo customers in multiple states who have been charged fees or faced collection actions for accounts they did not sign up for.” Ideally, Wells Fargo should have been broken up into 25 or 30 smaller banks after the Panic of 2008, which would have injected a lot more competition into the marketplace. Instead, Wells Fargo has been allowed to gobble up one bank after another (including Wachovia in 2009). The less competition megabanks face, the worse their practices become. As the lawsuits filed in May indicate, it is Wells Fargo’s customers who have been paying the price.

The Affordable Care Act of 2010, aka Obamacare, has brought some desperately needed reforms to the health care insurance industry in the U.S. One of the goals of Obamacare is injecting more competition into that industry. However, the ACA needs to be expanded considerably, and doesn’t do enough to rein in companies like Aetna, which has a long history of raising premiums considerably while subjecting Americans to abysmal customer service. California resident Kevin Roberts knows that all too well: when Roberts’ daughter, who suffers from autism, needed occupational therapy in 2012, Aetna repeatedly referred him to a clinic that didn’t even offer the type of treatment she needed. And it was also in 2012 that thousands of California doctors filed a lawsuit alleging that Aetna routinely denied patients access to out-of-network physicians even when they had policies that were supposed to cover out-of-network expenses.

In 2011, the American Medical Association reported that 19.3% of health insurance claims were being processed incorrectly in the U.S. Anthem Blue Cross/Blue Shield, aka Anthem, Inc., was among the worst offenders: only 61% of its claims were being processed correctly. But despite its bungling and atrocious customer service, Anthem Blue Cross/Blue Shield wasn’t exactly known for reasonable prices. In 2009, Anthem Blue Cross raised rates as much as 68% on some individual policies in California only to announce that there would be additional rate hikes of up to 39% in California the following year. When the California state government’s patient advocacy office issued its annual report in 2014, it gave Anthem’s HMO plans only one out of four stars in the area of patients being able to “get care easily.” Anthem received more bad publicity in California in 2014 when it refused to pay for the hospitalization of Jeffrey Rusch, who was suffering from metastatic stage-four cancer, even though Rusch and his wife had paid Anthem over $100,000 in premiums since 2008. Anthem insisted that Rusch’s hospitalization for chemotherapy was medically unnecessary, although Anthem relented and agreed to cover the expense after Rusch went public with his nightmare.