Beyond "Storage Wars" of the 1 percent: A not-so-radical proposal for the art museum of the future 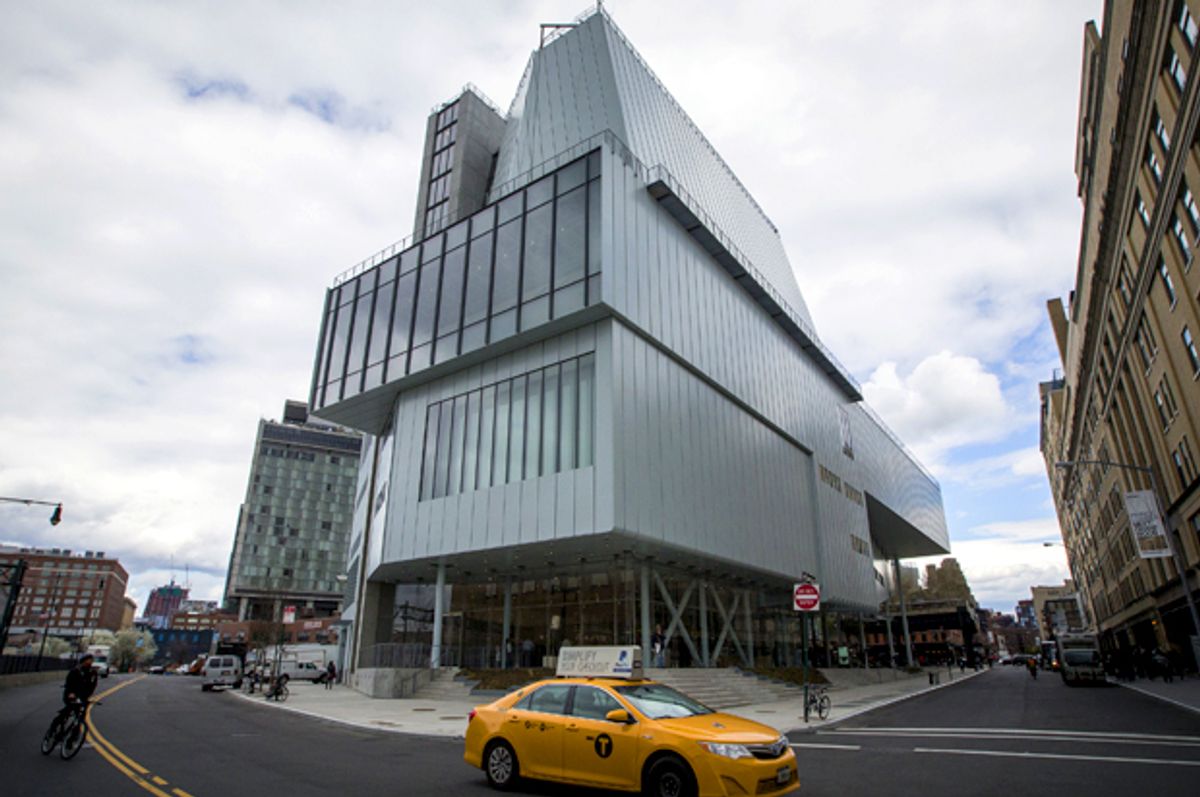 If I had a few billion dollars, I wouldn’t have a few billion dollars. I would give away a billion here or there, found a foundation to help save people, and underwrite cultural institutions, especially those that support young artists and writers. But if I were to indulge myself, I would buy fabulous works of art—for me to see every day, for art is surely my weakness. In time, my art collection would probably need to be shared, if only to protect me from my greed, and from burning in the hell in which I don’t believe. Great art belongs to the public. Maybe I would build a museum. I wonder how arty my art museum would be?

On May 1, 2015, the Whitney Museum of American Art opened a new, $422 million building, a Renzo Piano-designed structure on Gansevoort Street in the Meatpacking District in New York. The building tells the usual tale of power and old New York wealth, thanks to an initial $125 million gift in 2007 from Estée Lauder’s American Art Foundation. Upon the opening, with a visit from the first lady and her challenge to the Whitney’s directors to make the museum’s great collection available to underserved populations, now seems the time to think about what’s boxed in Renzo Piano’s new box, and to consider what the ideal art museum might be.

The new Whitney’s beautiful galleries afford extraordinary flexibility, with 50,000 square feet of exhibition space sans columns, a black-box theater, and various smartly designed elements that should foster innovative curating. Piano’s building has a brutal charm, industrial and pretty, at the end of the High Line on the West Side. Down the stairs at 14th Street, and make a right: the lobby’s airy space frames a view of the Hudson River that neatly obscures the Department of Sanitation plant next door. Largess abounds: light, steel and the promise of fine art, much of it great.

The new Whitney shows art well, the museum’s primary function performed with aplomb. The galleries are on the top four floors: to begin, one takes “the most beautiful freight elevator I have ever ridden on,” according to Michelle Obama, up to the 8th floor, and then works down, with visits to the outdoor terraces encouraged, the eastward view excellent. Terraces are a major feature of Piano’s museum designs—whether utilized as semi-covered access tubes, as they are at the Centre Pompidou, or appended like fancy fire escapes, as they are here at the Whitney. From the street or from the High Line, assuming good weather, visitors arriving at the new Whitney see the folks on the terraces and can imagine themselves up there, delighting in the prospect. It’s no accident that once inside the museum, the elevator to the eighth floor opens near the terrace, and that most museum-goers tend to check out the view before stepping into the gallery proper. Seeing is a kind of owning, as Cortez knew.

Then the gallery viewing begins, from the eighth floor down to the fifth, for now, through the permanent collection that has its origins in the patronage of Gertrude Vanderbilt Whitney in the early 20th century, with her prophetic investments in the paintings of what became the Ashcan School. Today, to show its stuff, the Whitney curators offer 23 “chapters”—groupings according to 23 of the curators’s ideas—organizing the artworks, to help viewers parse what’s hidden within the timelines. It’s a curatorial fad, or maybe a development; over the past 20 years, we’ve seen curators begin to reposition artworks ahistorically in great museums, sometimes salon-style, sometimes by room or floor. We’re learning more about moments in time, these groupings say, and synchronicity: the job of a good museum is to teach, too.

But the job description of the good museum, like that of the good college, has also expanded over the same 20 years. A museum today has to do more than just show its stuff: a museum today, while still a church and a library, now also must be a mall and a playground and a store and a theater and a tax haven and an architectural wonder. Can you picture a museum with a dating app, its own version of Tinder? I can. Swipe to meet by the Kara Walker.

Culture is made by a museum, perhaps most conspicuously when a museum collects a specifically national collection, such as the Whitney’s. Claims are made by the museum’s curators when they decide how to show work—those 23 chapters in the new Whitney constitute arguments about who Americans were, are and will be. Not to mention who weren’t Americans yet: A museum also contributes to the rewriting of history, with those who were on the margins eased back into the national discourse. Thus a museum is a textbook, too, as visitors study for a variety of exams never to be administered.

A contemporary art museum has an additional challenge, ideologically, both to be the power and fight the power. For example, when the new Whitney displays an Abstract Expressionist painting, which in 1950 was a threat to the Cold War status quo, that painting on the wall today becomes the status quo, institutionalized as cultural capital, with meanings in 2015 that subsequent generations need to resist, and in resisting, make new. So there is the old Jackson Pollock painting on the new Whitney’s wall, and the museum has to figure out how not to overdetermine the artwork’s achievements and thereby erase history. (In this case, the new Whitney fails: Pollock’s “Number 27, 1950” has been hung vertically, despite convincing evidence that the painting is a horizontal.)

Museums remain halls of loot, rife with stories of who conquered whom, some victories discernible and others more illusory. A museum signifies triumph, this or that robber baron’s personal version of "Storage Wars" made manifest. Art museums are underwritten by victorious families, even those who might have won fairly; museum collections are built by collectors who mean well, and want to afford access to their spoils. Nonetheless, follow the money, and you’ll usually discover a dominant historical narrative, one inscribed with class and race and privilege—and maybe that’s altogether a version of history the good contemporary art museum needs to rectify.

The new Whitney seems to want to help, aware of itself as a public institution in this moment in time: the 23 chapters try to tell every story. But the result is a well-intentioned mishmash. The folks who run the museum cannot seem to decide whether to show great and not-great art in its fabulous exhibition spaces, and call that enough, or to instruct the viewers in 23 ways how these works don’t go together. The gorgeous, big elevator only travels between the first floor and the eighth, viewers shuttled to the top, while the smaller elevators (less popular, not as fancy) stop anywhere. Thus the architecture has an opinion that runs counter to the values of the exhibition; the show says start at the top, but even the elevators don’t agree.

According to a 2010 American Association of Museums report, the strongest indicator of museum attendance is not wealth but education, a report that notes the “majority minority” future of the United States; by 2050, current minority groups will add up to a majority, that is, more than non-Hispanic whites. According to the same report, fewer than 9 percent of adult Hispanics and 6 percent of adult African-Americans visit museums. One can only wonder what the new Whitney will look like in 35 years, or whom exactly it will have learned to represent and serve. At least, given what’s being shown from the permanent collection, and what’s in store, the folks who run the new Whitney are trying. And maybe, we can trust Renzo Piano to have gotten this building right, in the ways he got the Centre Pompidou and the Menil “campus” in Houston right, given the respectful manner his new Whitney pays homage to Marcel Breuer’s 1966 Whitney, especially in the west stairwells that “quote” Breuer’s building.

But the ideal museum needs to trust the viewer more than the new Whitney does, to let us select our degree of engagement with each work of art. I can imagine Bluetooth headsets, and a menu with various narratives as options, the 23 chapters more of a scavenger hunt through the collection than an imperative, multilingualism encouraged. Expensive? Surely not. But if so, that’s what money’s for, I think—to make possible each person’s advancement. (Plus, we already paid $22 just to ride the fabulous elevator, each of us a little Charlie Bucket with a golden ticket, Willy Wonka’s show about to start.) And finally, always, the ideal museum must exhibit its collection so as to foster the intimacy of every individual viewer’s perceptions.

How else might I “fix” a museum like the new Whitney? Make more art free to see—closer to the European museum model, with state funding—and perhaps make a little more effort to be a museum without walls. I’d host invitational shows on- and offsite, juried exhibitions with open calls; I would pay specific attention to underserved youth, to scholarships, to programming artists-in-the-schools (versus the dreaded, underfunded “art carts”). In other words, I would want the new Whitney to be at the vanguard of creating creatives, not only housing their trophies. Lastly, I modestly propose that the next $422 million underwrite Christo’s wrapping of Manhattan before wealth and privilege make the island uninhabitable, another great city lost. I promise to help—assuming someone decides to give me a few billion dollars.

Alan Michael Parker is an essayist, novelist, poet, and squeaky wheel. He's the Douglas C. Houchens Professor of English at Davidson College, and he also teaches in the University of Tampa's low-residency M.F.A. Program. Follow him on Twitter @AMPoProse